Well, it's happened again. A group of mentally unstable cyclists gathered just before midnight last night in Brown's Addition with the purpose of riding their bikes a hundred miles through hell in the wee hours. Among the faces in the group I recognized immediately were Glen Copus, Alan Jacob, Jason Gilman Tom McFadden, Justin Becker, Joe Thomsen. I didn't get an exact overall count, but it was damn close to 25. I made the same mistake I did last year which was getting there just 5 minutes before launch, which is just stupid. The pre-ride gathering is so rad - with all the anticipation and all the diverse and quirky equipment on show, it's a super-fun bike nerd hang. And none of the usual bikey pretension - if you're crazy enough to show up and throw down, you belong. I did manage to get this one picture off (all pics, as usual, are click for big) . . . 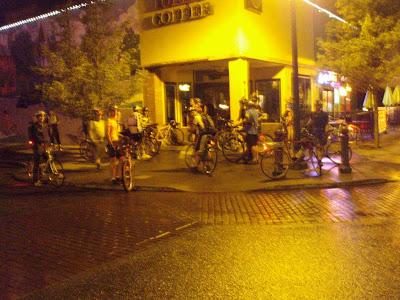 As advertised, the ride went off at exactly 11:59 pm. The combination of adrenaline and Peaceful Valley hillage were enough to immediately blow the big group to smitherenes. Here, Joe and Justin emerge from PV . . . 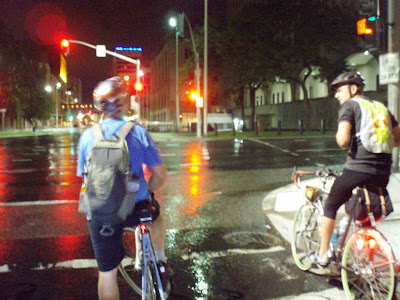 Here's the group I settled in with on the cruise out the Centennial Trail. L-R is Eric Ericson, Mike, Diane and Joe . . . 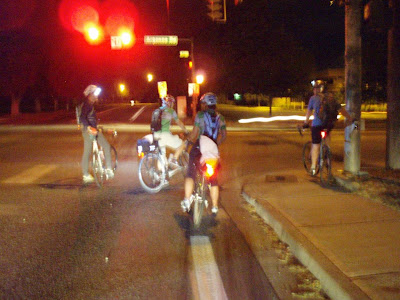 It was at exactly this same time that I realized I had left my kitchen sink burritos in my refrigerator. There were two of them and I had lovingly crafted them with just the right ingredients to turn me into a human rocket on a bike. I had some other shit along (dried fruit, jerky, blah, blah, blah), so it wasn't like I was gonna bonk and fall off my bike and roll down the bank or something, but oh, those burritos! I allowed myself a few moments to fall of the back of the group and weep uncontrollably.

Just before stateline, we ran into Glen and Ben. Glen, in his wisdom, was calling it a night and heading back into town. Ben in his youthful naivete, was looking for more abuse, so he joined us. That's Glen's wheel on the right. Ben's somewhere in that dark scrum on some righteous old-school hardware . . . 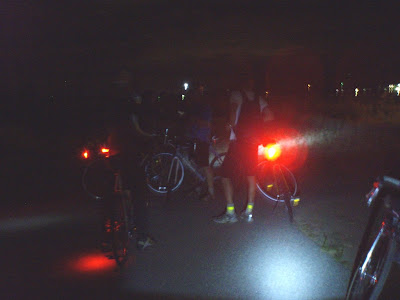 The 6 of us peeled off the CT and headed south on Idaho Road. That's where we had our first McFadden Pine Cone Happy Face Sighting (MPCHFS #1). There were 5 total, plus one super-fab bonus prize that I'll talk about in a minute . . . 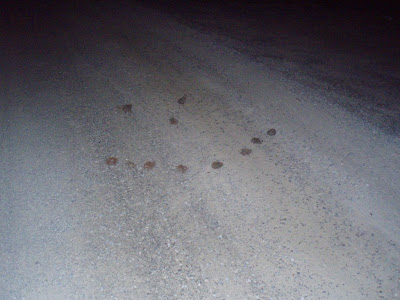 Here's our group of six at the top of the Idaho Road climb. I think this picture rules because of the massive drama that happens on the way up Idaho Road somewhere between 2 and 3 in the morning one time every summer and the fact that everyone is standing there. On top . . . 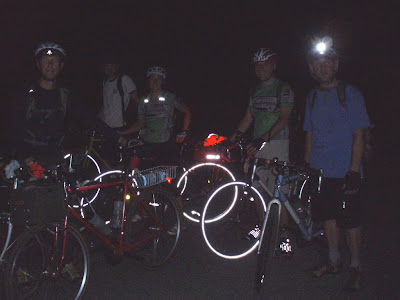 A little about our group: Eric (L) rode for the first time last year. If you were there, you might remember him - he was riding a Surly Long Haul Trucker. Sweet bike. He had a rough night last year - some mechanicals and then went off course and got lost. He was as determined as I was to come back this year and do it better.

Ben, Mike and Diane (C) were first-timers. For firsties, Idaho Road is where the MC punches you right in the face. HARD. It was for me last year and I know it was for Glen too, because we struggled up it together, and for me, it became that one hill on the whole course that defines what gears you should be running. Neither Ben, Mike or Diane had the right equipment and yet they powered through. You guys rock.

Joe (R) last did the course before it went dirt, I think. He came prepared on his new bike and was kicking our asses up Idaho Road. I didn't ask, but I got the sense that this is the deal: I think Joe invited Mike and Diane to come out and inherent in the deal because of Joe's character was that he was gonna stick with them.

When we dropped back down into Liberty Lake and hit Molter, Ben, Mike, Diane and Joe took the out and headed back to town. I think it was the right decision, because I think there would have been a bunch of misery otherwise. I'll bet if you ask any one of them, they'd say the night was a success, just because of the experience - it's crazy unique. I know that's how I felt last year. And if it's their thing, they'll gear up and come back stronger next year. And if it's not, it's not, and that's totally cool, too.

If there's one thing that amazes me more than anything about the MC, it's how people take care of each other. Something about the middle of the night and the enormity of the task at hand bring out the best in people - whether they're friends or complete strangers. I experienced it last year and again this year. Very, very cool shit.

And then there were two.

In contrast to last year, when I physically felt like total shit at the start and then went downhill from there, I was feeling really good this year. Despite some 11-th hour mechanical krap that forced me to run 35mm tires instead of the 28's I'd planned on (which turned out to be a blessing in disguise btw), I managed to get a couple hours of sleep and woke up feeling pretty good. That feeling carried through the ride.

Eric was feeling good too, and we talked about whether we were ready to give it a shot and we were. We were both in about the same condition, we both had the same basic determination to finish and neither of us cared about how long it took. Oh, and I don't think either of us could have done it without the other. It was just too big a task for either of us individually, but as a team, we had a shot. Remember what I just said about people emerging to take care of each other? Well, I don't know if he and I will ever see each other again, maybe yes, maybe no. But for these few hours, we had a responsibility to each other. MC style.

The course is huge and the weather was pretty shitty (despite the forecast of no rain it rained on us about 3/4 of the ride), so instead of getting overwhelmed, we just dealt with it a chunk at a time. Tom helped. MPCHFS #3 . . . 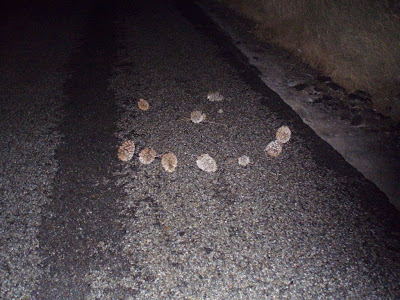 Here's a shot just after turning onto Bruna road, with the light of day starting to take over . . . 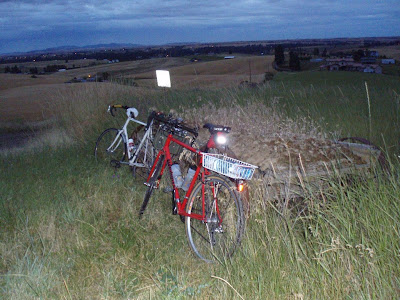 Okay, here's the super-fab McFadden bonus prize I was telling you about. Tom hung this off the gate on the closed portion of Dunn road. So totally rad, so MC. There were six gone when we got there and we took seven and eight. Then, while we were standing there, Dan and Dennis rode by. They'd been up and down the road looking for the turnoff and couldn't believe it when they saw us heading around the gate. They grabbed nine and ten. Since Eric and I were bringing up the rear, that was probably the last traffic past this gate. 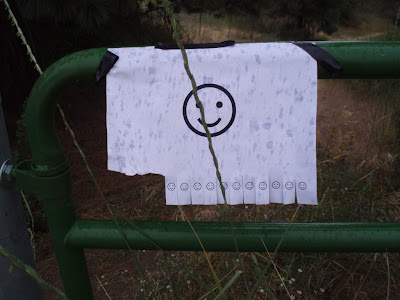 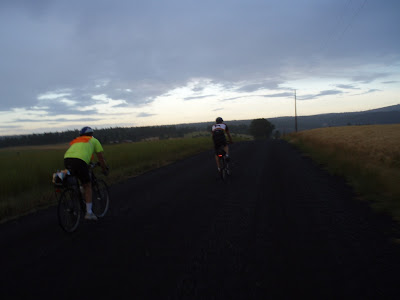 Eric, just after the climb up Sands. Damn, we were glad to get that last big climb out of the way. 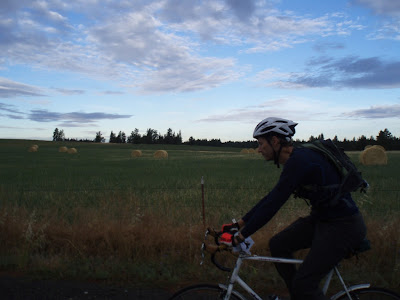 Eric and I agreed that we oughta stop at the Harvester in Spangle and fuel-up/rest-up for the trip back. While we were eating, Dan and Dennis also rolled in. We flipped each other the mandatory shit. We were all MC brothers, after all. Dennis had a time constraint, so pretty sure those guys just booked it back to town on 195. 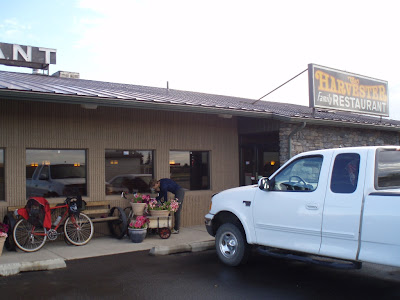 From Spangle on, the course was fast. Because of the rain, tire tracks were obvious and there weren't many. If 10 riders finished, we'd be quite surprised. Looked more like in the 4-6 range, besides ourselves. But who knows. MC mistique.

Eric and I hung together until Marshall crossed the FLT trail. He took the trail back to meet his kids because he's practical and well-adjusted and knows he made it. I took Marshall and followed the official course because I'm obsessive-compulsive.

This last pic is more for me than it is for you. I got a stranger to take it at the finish line. I was gonna do something way cornier, but ended up going with the lame and standard thumbs up. But it was a huge deal to finish and I wanted it recorded. Even if in all my standard corniness . . . 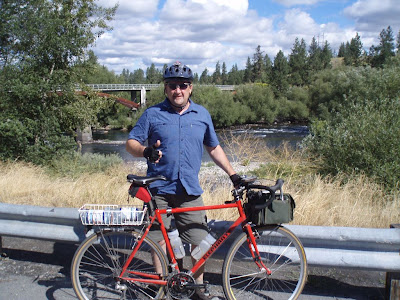 So that's about five times longer than any post should ever be. Whatever, I don't care. Sometimes great rides deserve long posts.
Posted by Pat S at 12:00 PM

Congratulations. Maybe next year I will be able to join you guys.

Dennis s& I enjoyed riding with you and Eric toward Spangle. Even more enjoyable was finding your blog which exposed a brother nerd. I hope to ride with you more often. THis was a great time, rain, missed roads and all.

Congratulations, Pat! I tried to sleep in after getting home, but my need for calories had other ideas. I took my soreness and exhaustion out on a plate of meat-scramble next to a plate of pumpkin french toast at chaps around 9:00. Then tried to nap all day but failed miserably because I couldn't seem to get in tune with Owen's nap schedule - little stinker. I'm saving my Red Bull energy shot for next year...

I totally missed the super-fab McFadden bonus prize. Bummer! I guess I saw it, but I was just trying to go forward.

Congratulations Pat! There definitely would have been some misery since my rear crank shifter cable broke at about mile 7 once we were back on the CT. It was an easy cruise on the my new 2-speed but it would have been pretty nasty had I continued. I'll be back next year with improved gearing and muscles.

Thanks for the write up Pat. I got home about 5:30 and crashed hard. And yes I will do it again...

Great job Pat! And great write up. Can I pilfer this in whole or part for mc.com?

Congrats, Pat! And your well-written super long post had me wondering if I can be that insane because it doesn't seem so insane any more.

Thanks, guys, for the comments. For those sitting on the fence, I hope that you will consider giving it a shot - it really is unlike any ride that I'm aware of.

It is a big commitment in terms of preparation and then what it takes to actually do it, and it can be hard to carve that out of your life. One thing to condsider is planning to do only part of the ride. That way you get to kill yourself but you don't have to totally kill yourself and you get to be part of the action.

Justin, hope you got some sleep. I buzzed around all afternoon and then crashed at 5:00 and slept straight through till 6:00 this morning :-)

John, pilfer away, in whole or part.

I seriously had my shit together and ready to hit the road, but came down with some kind of bug on Saturday morning. Wish I could have ridden with you guys!

Congrats Pat, and my respects to everyone who did all or part of the ride :)