Today was an all day road trip with friends Chip and Pat that served a couple of purposes:

John initially brought this area to my attention.  He's been down there a time or two and I haven't been able to join him, but I've been intrigued enough that I'd made it a goal to get down there this Spring.  Chip hadn't heard about it either, and we'd been chatting about the recently reported closure of a nearby section of the JWPT, and all it took was me mentioning it to set the plan in motion.

There's a lot to be interested in about this recreation area: 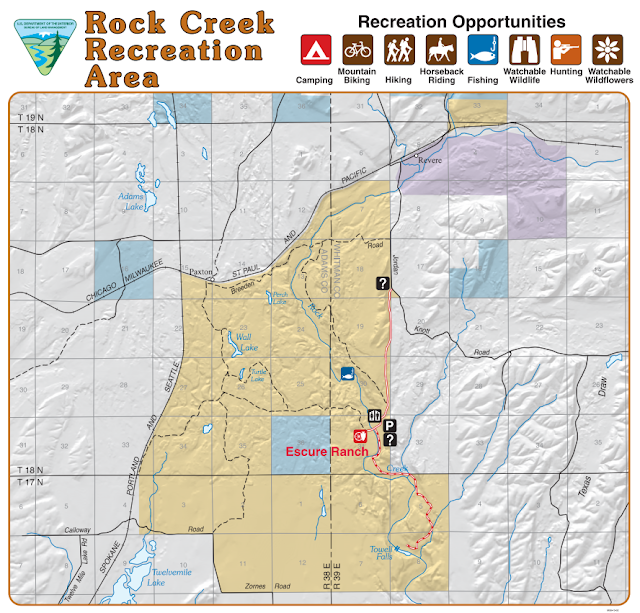 We arrived at the parking area and unloaded our bikes.  I was sporting my sporty new WTB B+ trailblazer tires on my sporty new WTB B+ Scraper wheelset.  I've been devising the PERFECT set of wheels and tires for summer bikepacking use on my two fatbikes and it has become apparent that over the continuum of wheel/tire widths that now exists ranging from skinny (so yesterday), to baby fat, to mid-fat to regular fat, to obese, to morbidly obese, I should optimize somewhere in the area of  baby fat to mid fat which I can do with one set of wheels but will need two sets of tires and of course the diameter of tires versus what the bikes were originally designed to handle will majorly factor into the decision because if you make the wrong choice, you might lower your bottom bracket by 3 or 4 mm, which may render the entire bike totally wonky and useless in which case you find yourself wondering if maybe you should have settled on 29+ as a summertime standard instead, except that this would drive the diameter to the point where it won't fit in one of your fatbikes which would defeat the purpose, and of course no one wheelset is going to to fit in both bikes anyway, since the rear spacing is 170 mm on one and 190 mm on the other, so the best you can really do is share the same front wheel, which thankfully shares the same 150 mm spacing between both bikes, but you don't want mis-matched wheels and tires on either bike so what you really probably need is three wheels and three tires, if you are thinking about this whole thing logically.

I hope it is obvious to you at this point that I made the right decision. 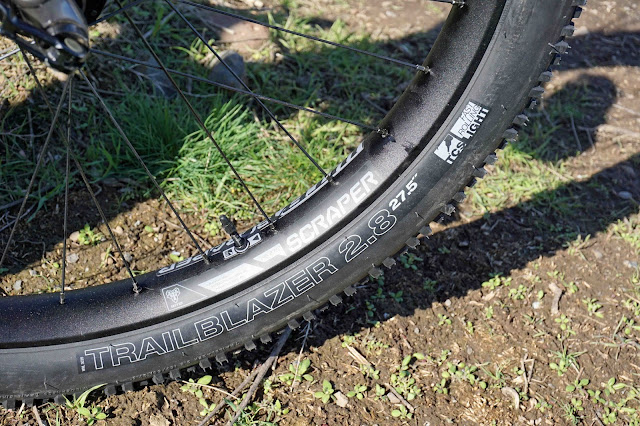 Luckily, fatbike #1 has just enough clearance for these tires . . . 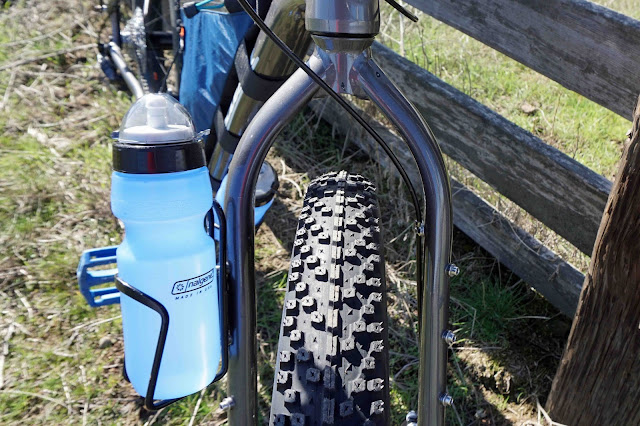 We decided that our first stop needed to be Towell Falls.  Just a couple of miles into our journey, Chip remarked that he hadn't envisioned this kind of topography.  What had been just on the tip of my tongue was that this garbage is steeper that shit.  I responded instead that I hadn't envisioned this kind of topography, either.  Culture truly can rub off.

It's the right time of year to check out Towell Falls, for sure.  Rock Creek splits into two branches at this point, and there are three separate falls, two of which you can get to/see well, and one which is inaccessible and fairly hidden, but looks to be the most impressive of the three.  Here's #1 . . . 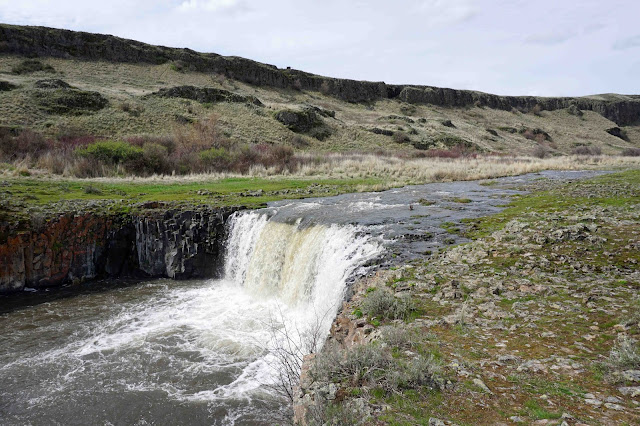 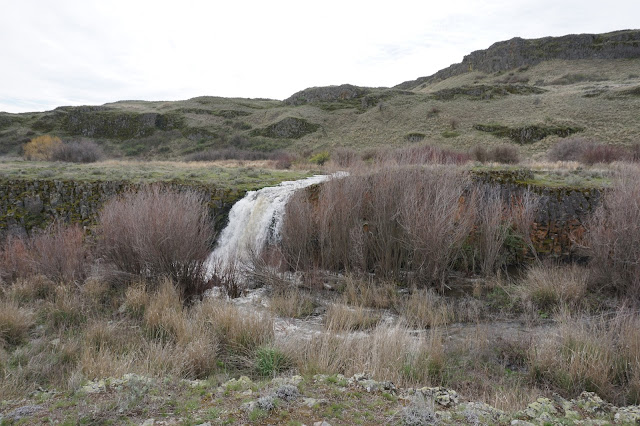 Having satisfied our waterfall cravings, we set about on the return trip.

Once back at the parking area, we were ready to enter the ranch proper. 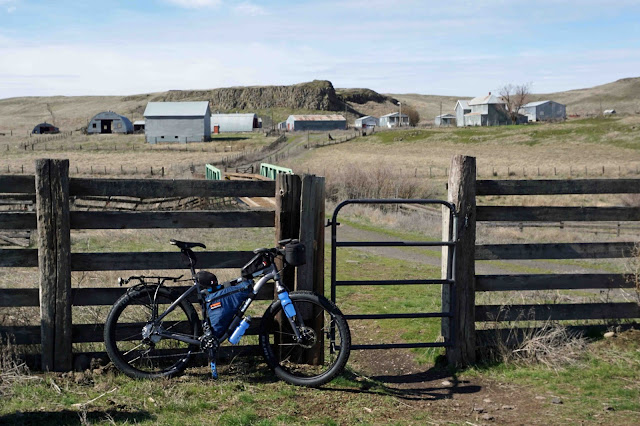 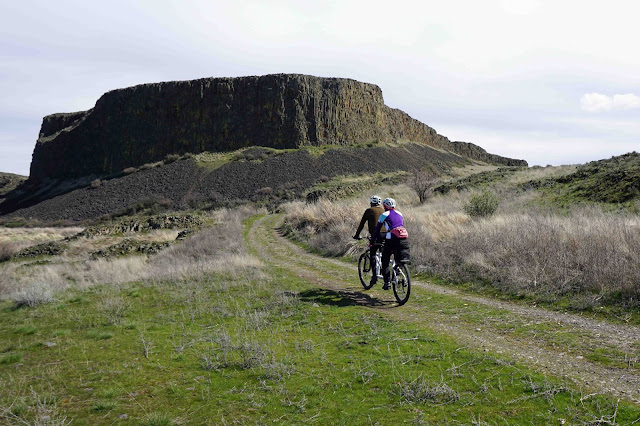 I lost count of exactly how many cattle gates we went through, but it was approximately a shit-ton. 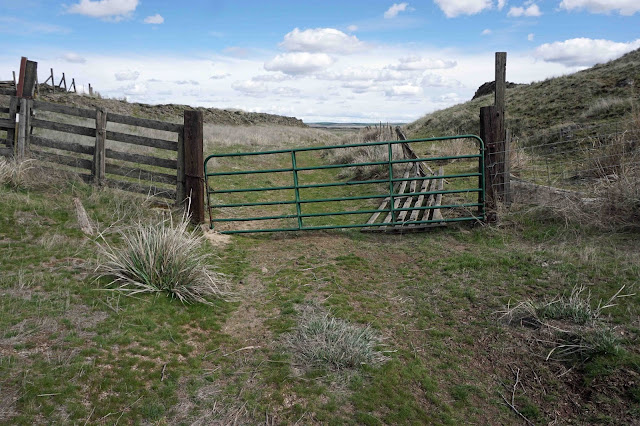 No serious adventure of this sort would be complete without an epic battle with goatheads, and so it would come to pass that we ran through a patch and punctured all four tires numerous times.  I was sporting a tubeless setup on my sporty new wheels and tires, and the sealant did its job and I was largely unaffected.  Chip had sealant in the tubes of both his front and rear tires, but the rear sealant had dried up and gave up the ghost under the attack. 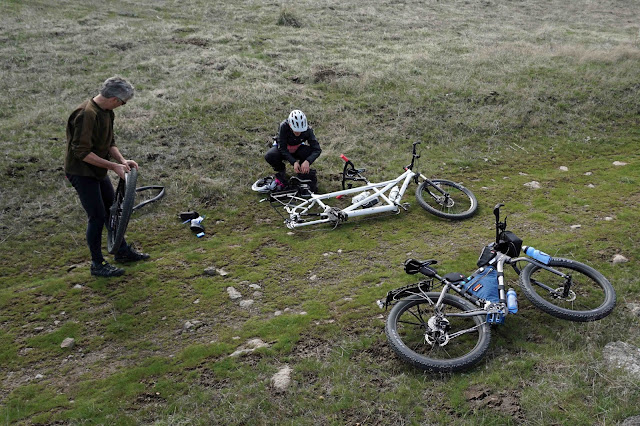 Although Chip and I had both spent a bunch of time on Google maps/earth prior to our trip, and had both come pretty well prepared with gps machines loaded with tracks, our directional confidence began to falter as we got farther into the depths of the ranch.  One thing that we could be pretty sure of was that Wall Lake was 1.25 miles ahead, in one direction or another.  So we pressed on. 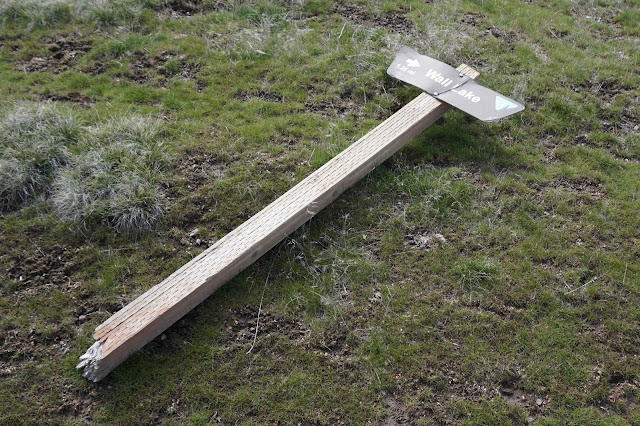 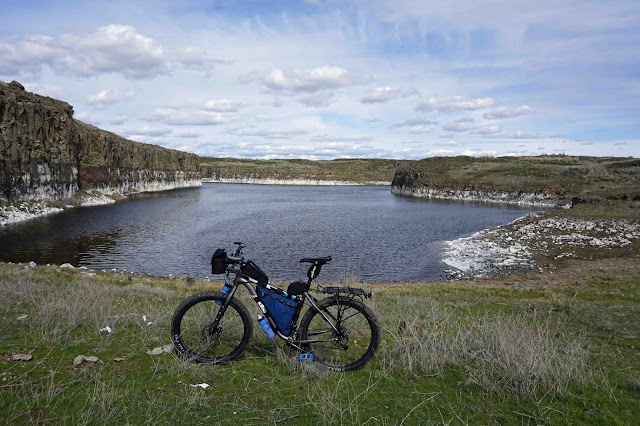 The water was not exactly alpine-lake-crystal-clear.  More eastern-Washington-cow pasture-lowlands-you probably need to be really thirsty. 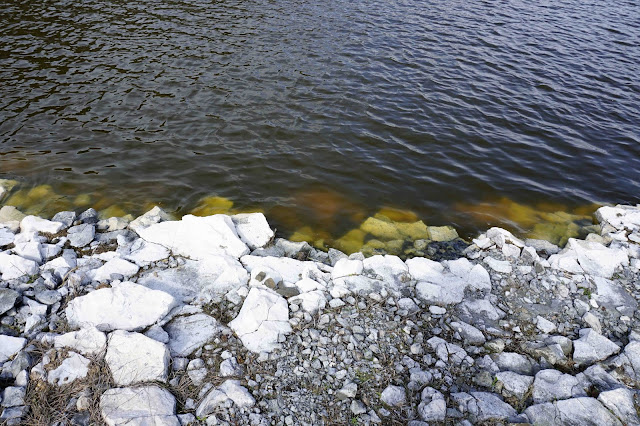 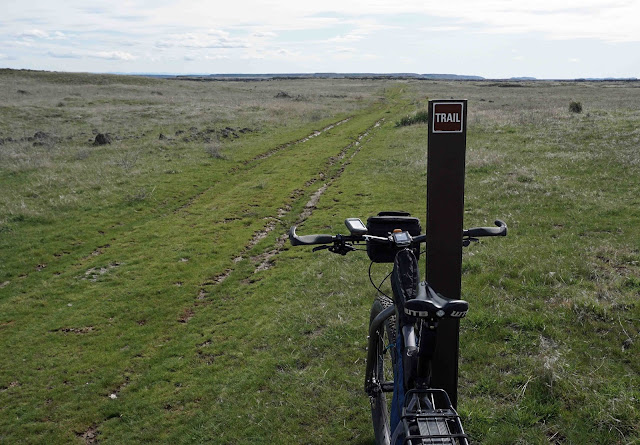 The bulk of the cattle grazing population has not been transported in for the season, but there were still a few colorful characters hanging around. 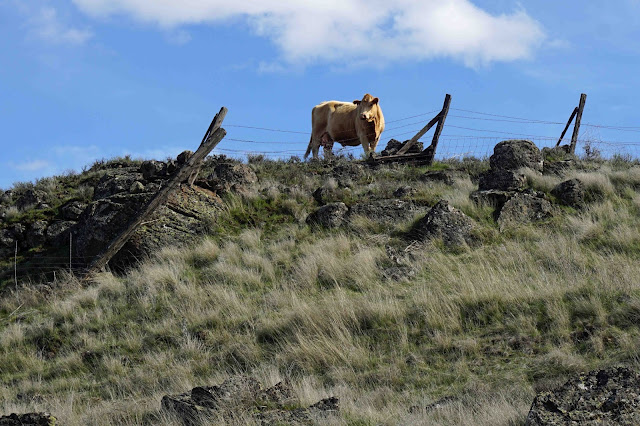 After a very nice loop through the ranch at the upper elevations, we descended back down to ranch headquarters and the parking area. 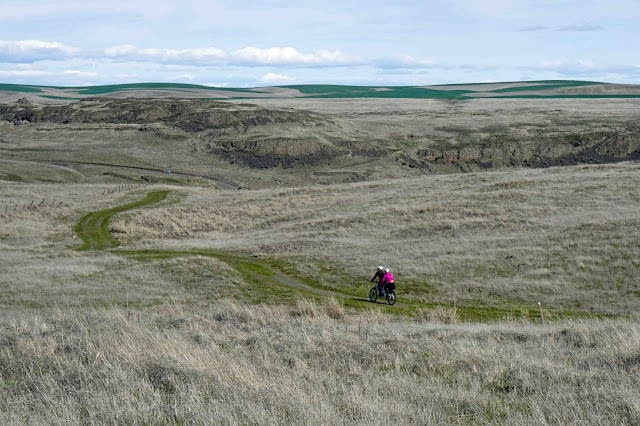 This is the ranch HQ, with the parking area just on the other side.  Those vehicles in the distance on the left are equestrians and their animals and camping rigs, making a weekend of it. 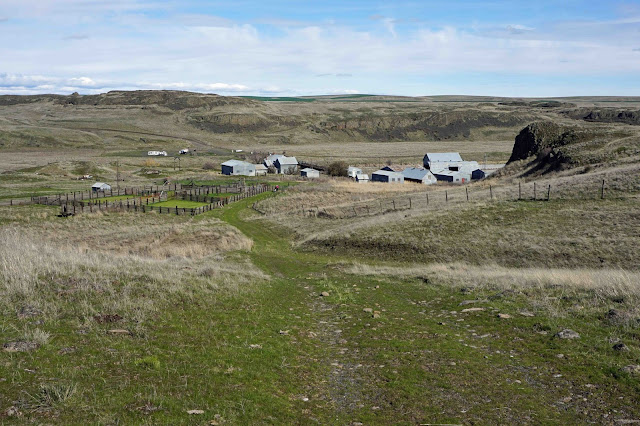 Rock Creek/Escure Ranch is a pretty cool early-season rec area.  We talked about the possibility of coming out for a weekend and base camping, and exploring in more depth.  I would be super down with that.

So here's the deal:

Chip has been following the drama surrounding the attempted closure of 130 miles of the eastern portion of the JWPT for several months and he has some contacts in the know, and he told me that the landowner who owns a short section of the trail just SW of Ewan on Highway 23 has decided to close his section of trail to general use.  It is not yet clear to me how he intends to enforce this closure, but if he succeeds in doing so, detour options will be necessary.  We scouted out a couple of these today.

The first is the north detour.  In the image below, the route from mile zero to the yellow diamond is the JWPT.  The rest of what is shown is the detour.  As you can see, the detour is only slightly longer than the section of detoured trail.  The problem with this route, though, is that you will spend 3+ miles on the shoulder of Hwy 23, which is an armpit of a place to ride, IMO.  It's just a major buzzkill in the middle of a remote, off-road journey through eastern WA.  With that said, everyone has their own tastes and priorities, and this may not bother you that much. The second detour option is to the south.  Here again in the image below, the route from mile zero to the yellow diamond is the JWPT.  The rest of what is shown is the detour.  As you can see, the detour is about twice as long as the section of detoured trail.  HOWEVER, the entire south detour route is gravel and also devoid of traffic.  And what's even more significant is that the condition of the roads is generally pristine - very little in the way of washboards or loose gravel.  If I were planning a JWPT trip today, it would be the south detour for me, hands down. 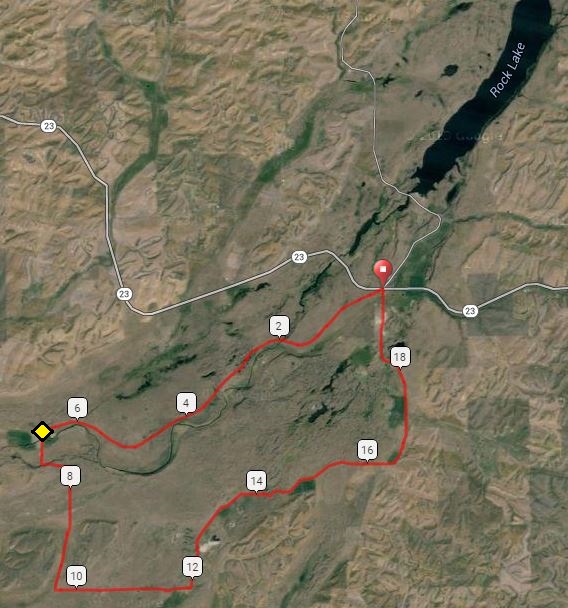 You can find more information on the north and south detour routes here and here, respectively.

I dig the variety and diversity of rugged and remote landscape that our fine state has to offer, and it was a real treat to get out and do some exploring today.  I can only hope that this sets the tone for more of this type of activity this Spring and into Summer.  Both my body and soul can use it.
Posted by Pat S at 11:18 PM

Love the photos of this supercalifragilisticexpialidocious bike ride, Pat S
And I love the tandem MTB because it's the only way I can keep up with Chip on a bike!

Thanks for checking out the JWPT alternates that Chip and I have been discussing. --Chris

Really? This guy simply decided to close "his" section of the JWPT? That's a thing? If so, I'm going to close the road in front of my house. I'll continue to use it, but other users are a pain in my ass.

Thanks, Pat, it was great getting out with you guys.

Chris, I appreciate all your intel that I'm getting through Chip.

Bob, while most of the trail is owned by the state, there are a few sections that reverted to private ownership after the RR bankruptcy proceedings. This is one of those sections, and it looks to be less than 2 miles long, but it is his land and he has the prerogative to restrict passage. Most of the owners of the private sections do allow trail users to pass through. He has, for all these years, so I'm not sure what has changed his mind now. Probably some hard feelings over the recent debate that has been stirred up by the attempt to close the eastern portion of the trail.

Ah- thanks Pat. Chip filled me in on the details, and the guy is within his rights and sounds reasonable. I guess I'm a little testy when it comes to the John Wayne these days!
Also, your awesome account of your traverse was my introduction to the JWPT. Great read. Thanks!

gonna go ahead and put this here:

Two miles times 10 feet is about 2.4 acres, right? Sounds like a good use of eminent domain, and 2.4 acres shouldn't cost the state very much.

Thanks for the detour info. Got my permits, I figure I'll give him a call before I head out and see what he says. I'm thinking of heading out to Cow Creek area tomorrow to see if I can figure out if some dirt roads I've been googling are private or not. Who knows might just end up taking a ride from Martin Rd down to the trail.

Can someone tell me what the issues are with the eastern Washington adjacent landowners? I am planning a trip on the jwt and sincerely want to respect the landowners along the way. Is it the camping on their property, littering, or what that is causing them grief? If this thing is going to work we need to all get along. I'm new to the issue so would appreciate a primer on the trail etiquette that is expected. Thanks!

The property owner is within his rights. This is not a road, this is his yard. I'm sure none of you would like people going through your yard or camping on your property. You would think that cleaning up other people's human waste and garbage would get old. Plus, there's a great fire danger from campers. A fire there can spread and the farmer could lose everything. Why don't you offer to pay the land owner for passage through his property?