Q: How Do You Kill An Armadillo?

A: Run over one of these. (Not the pen, the puny little thing the pen is pointing to.) 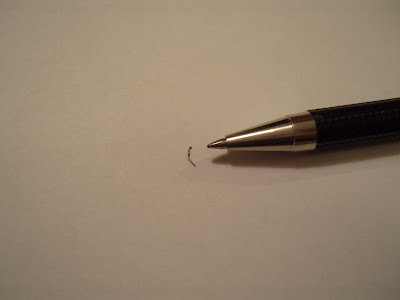 Tonight, my lovely bride Patty and I had a fine meal at the Two-Seven (Moo Shu burger for me, fish tacos for her), followed by an even finer nightcap at Baskin-Robbins (cherry cheesecake for me, some goofy chick flavor for her). All was bliss until we loosed the tethers of our youthful ponies, only to find that Friday the 13th had come a couple weeks early.

Due to my microbrew-influenced state of mind, I actually considered just riding home on the flat. But finally I sucked it up and found a well-lit spot on Baskin's sidewalk. They must have been so proud of their cultured south hill customers, greasin' it up on out front. Patty was wondering if this enchanted evening would ever end. 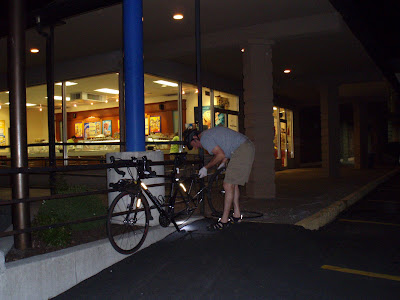 After thousands of trouble-free miles, I was starting to think that nothing could bring down an Armadillo. Jinxed myself big time.
Posted by Pat S at 12:08 AM No comments:

No really, I mean it. Because construction season means miles and miles of adventurous, traffic-free roads that are available to us on eves and weekends. 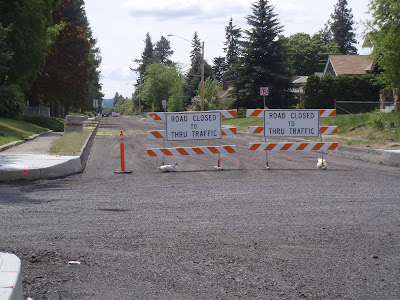 A ride last Sunday took me up to the north side and I returned via Wall, which is closed from Francis to Wellesley and has hardly any traffic from there down to Garland. A zig down the Post hill and a zag west on Montgomery put me on Ash, which is closed from NW Blvd to the bridge. This bridge wouldn't normally be my first choice to cross the river, but traffic was almost zero because nothing's feeding it. Nice way to get through town. John Speare and his buddies hit the bridge a while back right after the approach was paved but before it was open. That must've been a sweet ride.

Over the last couple of years, I've found these types of closures relatively fast and easy to get through and a helluva lot more fun than riding on pavement. There's always a path for the heavy equipment to get through, and it's pretty tightly packed because of their weight. Riding on 28 mm tires also helps . . . these, for me, seem to have the right balance between speed and the ability to handle non-blacktop surfaces.

Of course riding through, while cars are forced to drive around, doesn't feel too bad either.

My name is Pat. This is my blog. It's about riding bikes here in Spokane.

26InchSlicks? Well, mounting a couple of these on my mountain bike several years ago changed everything for me.
Posted by Pat S at 9:40 PM No comments: