I was first introduced to the Quilomene and Colockum wildlife areas by my buddy Ward in 2013.  The "introduction" was an epic four-day north-to-south trip from Wenatchee to Vantage.  Since then, it has been my great pleasure to make several additional excursions into this wonderful public access playground and at this point, the place is pretty much in my blood.  I can't call a riding season complete without a trip or two into the "Q".

As the weather forecast turned favorable this past week, several of us immediately fixated on the possibility of a visit.  The thing about the Q is that the window of opportunity for visiting is a pretty narrow one - too early means too cold and too wet, and too late means hotter than blazes and having to contend with rattlesnakes.  The window is somewhere around 4-6 weeks in the Spring and within this window there can be other weather events like rain and wind that make it impractical/unwise to go in.  The place is incredibly wild and having been "bit" a time or two, I have tremendous respect for what can happen out there, which I guess could be characterized as a healthy fear.

So within this year's window, the conditions for the weekend looked about as good as they get, and we decided to pull the trigger on a spur-of-the-moment quick overnighter.  There were some people who wanted to be there but couldn't, and as it played out, the gang that touched down was, from L-R, Chip, Randy, Ward, and on his inaugural visit, Ward's new rescue-dog partner, Hank.  Along with me, of course.  So four dudes and a dog, then. 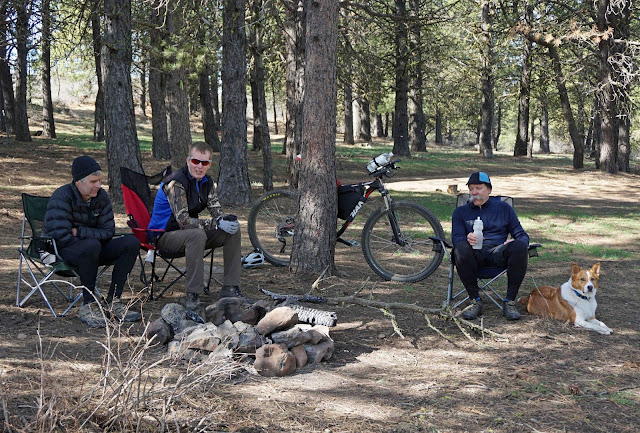 With the exception of Chip, who actually started a day earlier on a solo true bikepacking experience and met up with us at our campground, this turned out to be a car-camping affair.  Nothing wrong with that - it's the right call in certain situations and this was one of them.  We had a Coleman stove and Road Trip Grill, Bluetooth music, a legit firepit fueled by split cordwood brung from the big city, real chairs, a fair abundance of different lovely varieties of water, sanitary wipes, and other stuff that can be, ummm, nice.

So us city dwellers fumbled around amidst our job responsibilities and gear-sorting gyrations and eventually found camp in three separate vehicles late on Friday afternoon.  Chip had been roaming around the area on his bike and was waiting for us.  We got somewhat settled in and then headed out with bikes and lights to watch the sun go down. 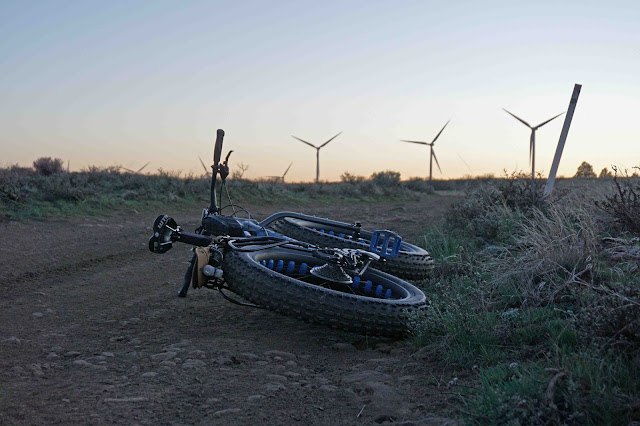 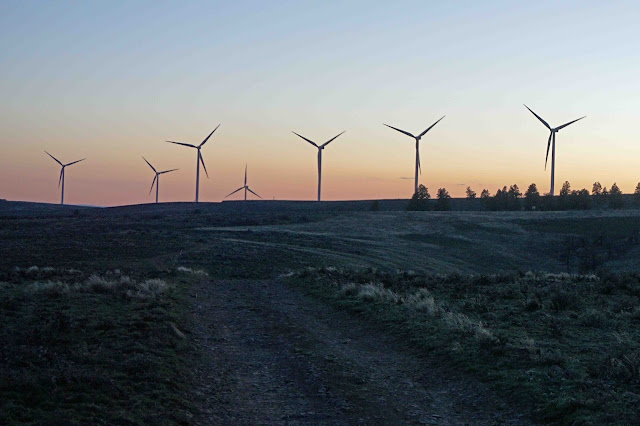 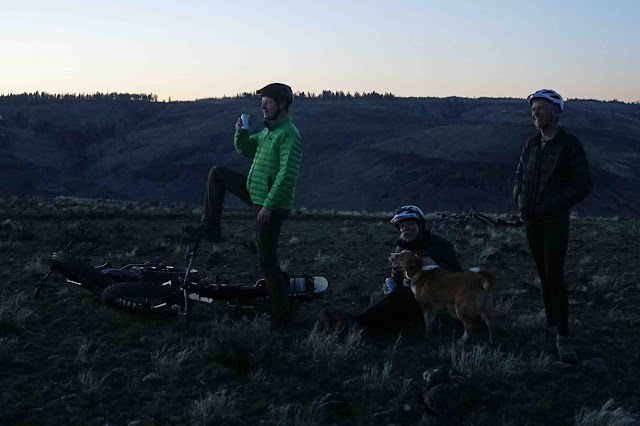 Eventually, we returned to camp and ate like kings, and told honorable lies. Like I said, car camping has its place.

The prime excursion happened on Saturday, and shortly into it, we were treated with this view of Mt. Rainier.  Mt. Adams was also visible during our climb. 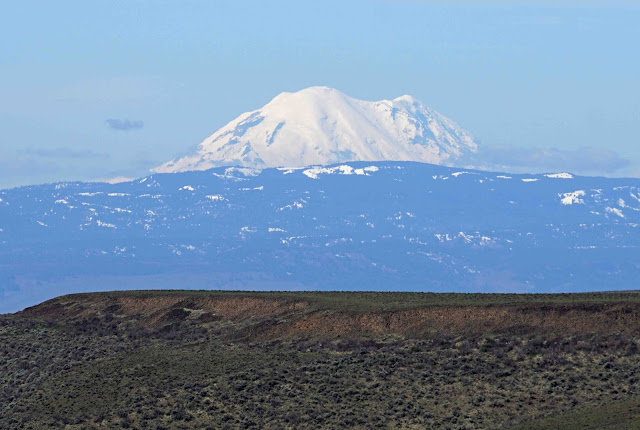 Unlike any of my previous ventures into the Q, we would not be enduring major climbs from the Columbia River to the ridge, which is somewhere in the range of a 3000 foot elevation change.  On this day, we would be taking the "high road" along the ridge, which none of us had ever been on before.  And although we would not be dropping thousands of feet down into the gorge, our ride would still be anything from flat - nothing resembling that concept exists in the Q.  From our base camp at somewhere around 3800 feet, we would be climbing to around 4500 feet.

The dry stuff was challenging enough.  Fat tires are a fairly good prescription for dealing with some of the considerable chunk, as Randy clearly illustrates. 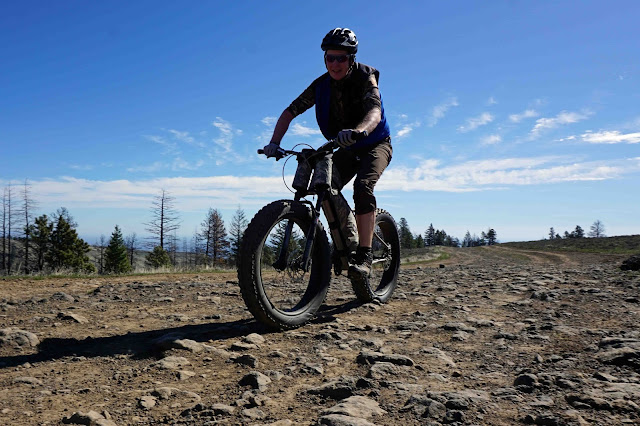 Eventually, we got into the snow, much to the delight of Hank, who obviously has some snow-dog ancestry in his makeup.  He was seriously diggin the white stuff, all day. 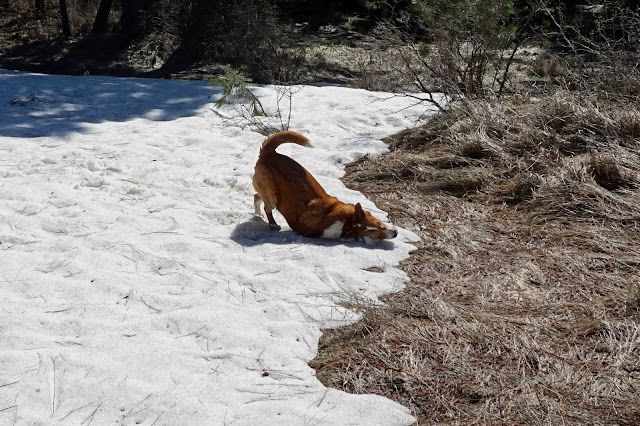 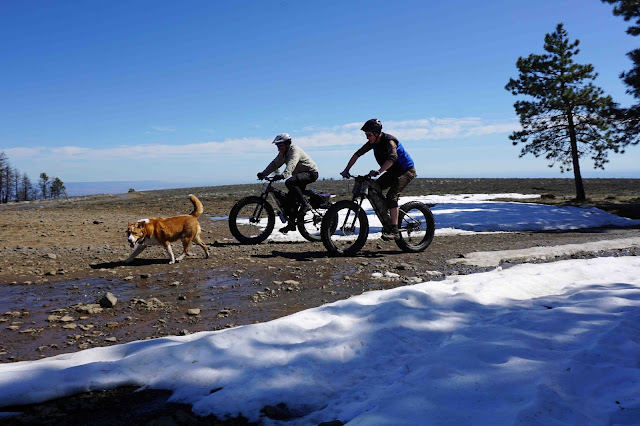 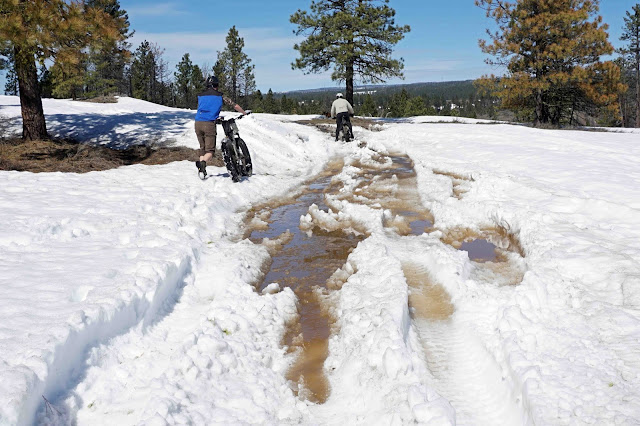 Chip was the only one in our group who was not sporting massive fatness, as he was running mere sleek-fat 29+ tires.  I will be interested to catch up with him after today and hear his thoughtful thoughts on tire choices for the Q.  He also owns and rides a full fat.  It's an interesting discussion. 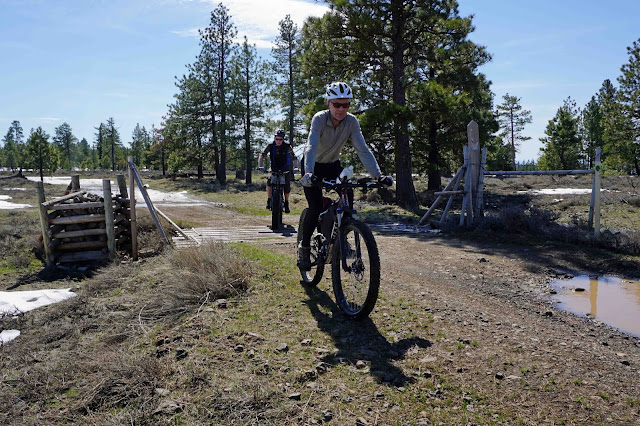 Hank and I got off to a bit of a rough start, but at some point I slipped him some bits of the bacon that I had cooked up as part of our car-camping breakfast extravaganza, and from that point forward, I was pretty much the "bacon man", who should rightly be kept in sight at all times. 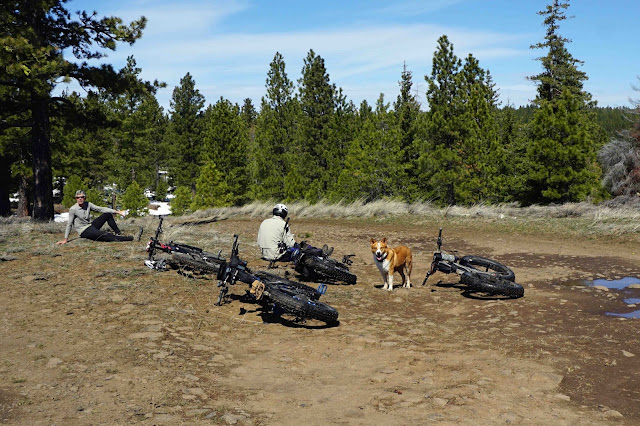 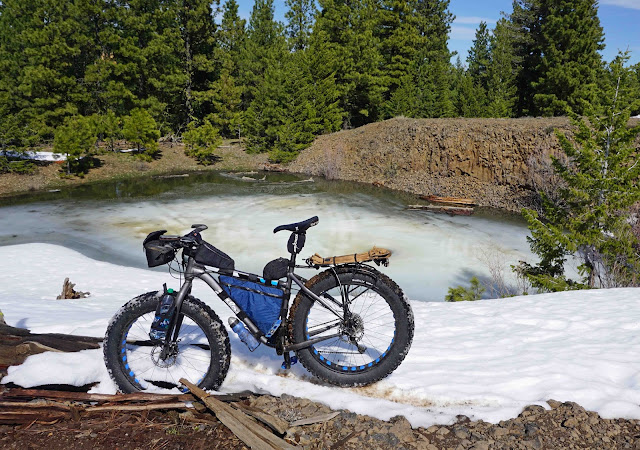 There was a lot of super mucky stuff that was fatbike-fun.  Again, Word. 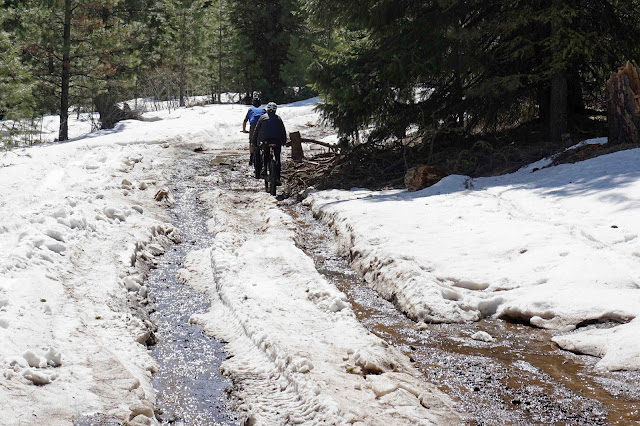 Ward and his new buddy are cake and ice cream, clearly.  Super fun to be a part of the process of these two guys getting to know each other on the trail. 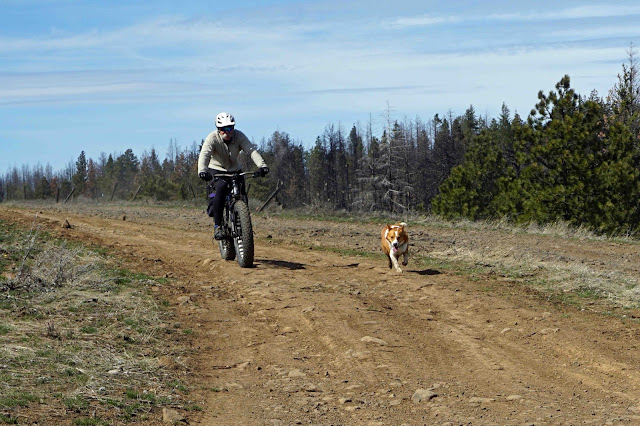 That's Randy and Chip in the distance.  It's a great perspective for me on how vast and wonderful the riding experience is in the Q. 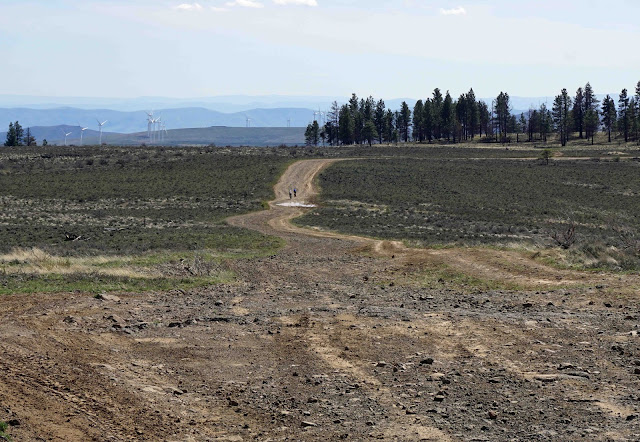 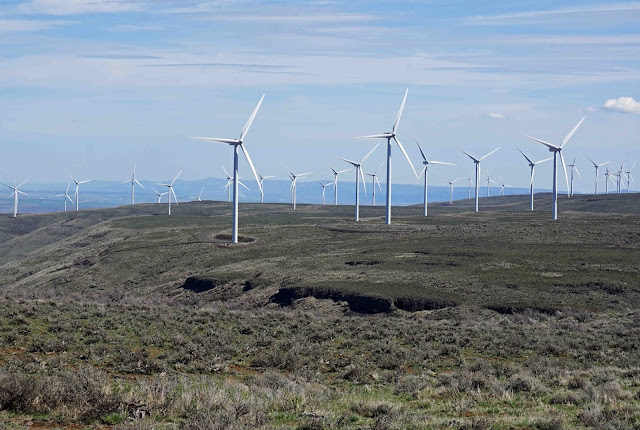 I am at a loss as to how to adequately describe my latest experience in the Q, just as I have been after my previous experiences.  So I guess this is my latest, best shot.
Posted by Pat S at 12:29 AM 62 comments: