Now that I have your attention.

I really just wanted to talk about why my image/icon deal is snoopy. Maybe you think I have the maturity of a four-year-old.  You would have a strong case without really even trying.  But then again maybe I'm super-mature and compassionate and doing you a huge favor by not making you look at my face.

The hot stove league.  That's what they call it when they talk about baseball in the middle of winter.  I'm not sure about the cycling equivalent.  Frozen derailleur drivel or something.

Anyway, I hope you had a good Christmas.  I scored a killer bike tie and handkerchief, courtesy Jacque.  If we're ever hanging out together and you have to blow your nose and you ask if you can borrow my handkerchief, the answer is no.  Hell no, in fact.  I might as well just get that out there now. 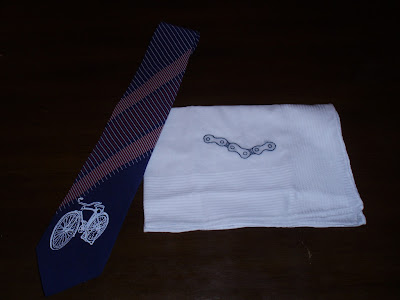 I was able to take a coupla extra days off over the holiday, today being my last.  Which enabled us to shift the normal 3-hour shop night to a concentrated 5-hour shop afternoon.  That's John's normal-size regular-duty rack on the left and Ryan's large-size super-duty rack on the right. As you can tell, both are getting close to done. These guys have put a lot of effort into doing things the right way and I'm excited for them to enjoy the great equipment they've crafted.  I love knowing that both these racks will get rode hard and put away wet, as they say. 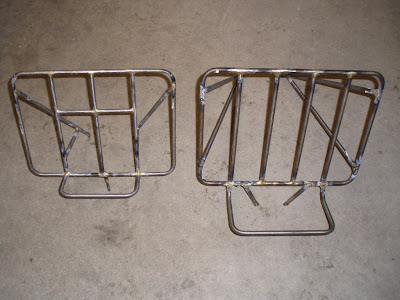 John's is a mid-fork mount and Ryan's mounts all the way at the dropouts.  John's has a single attachment to the fork crown and Ryan's has two.  Did I mention that Ryan's is super-duty. 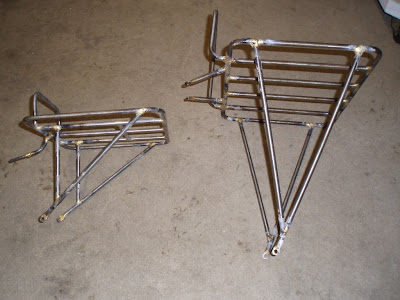 As far as any projects of my own, I haven't had much cooking up until now, but I'm just getting started on a Tubus Duo-inspired lowrider design for the Elephant.  It'll be how I carry my commuter crap later this spring.  It's gonna be a tricky little bastard, so I'm glad I've got some time to dink with it. 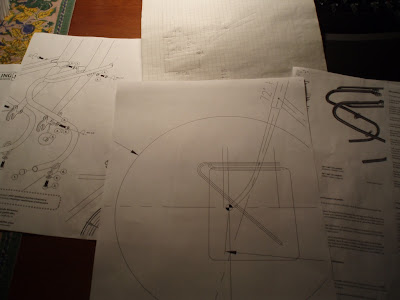 Other than that, I'm starting to decide that I need a lathe or milling machine or both, so I've begun the process of figuring out how to spend money that I don't have on those.

Lasty, Glen's Maddie-bike design has been taking a beating on the frame-builders list today.  It's pretty comical how some people feel "obligated" to speak up and save Maddie.  Umm, pretty sure she's safe.  And has the standover she needs, to boot.

Have a good new years and stay safe yourself.
Posted by Pat S at 10:38 PM 2 comments: 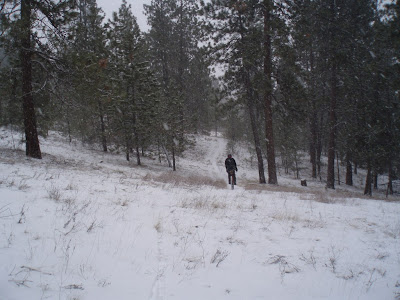 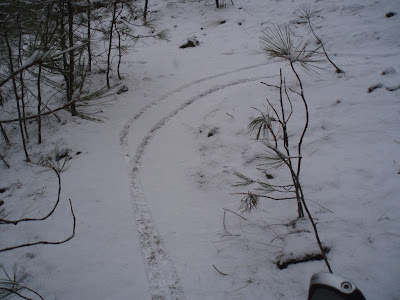 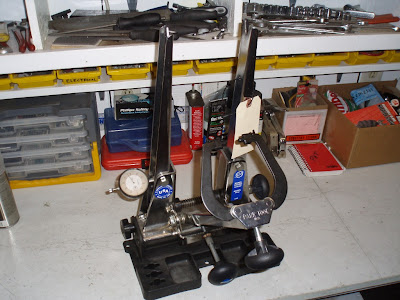 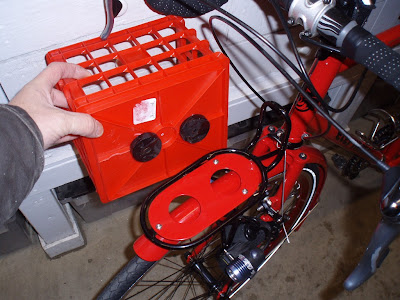 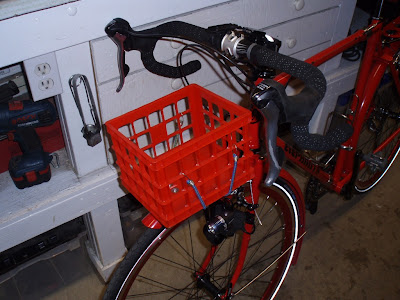 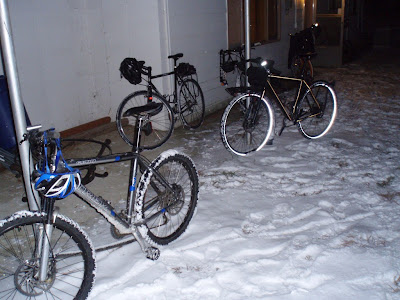 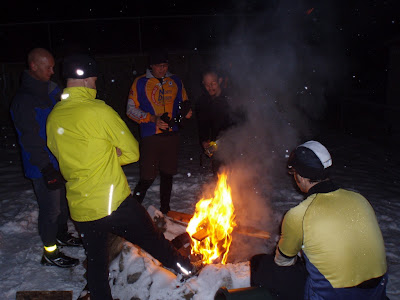 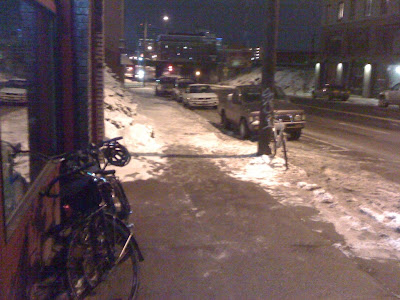 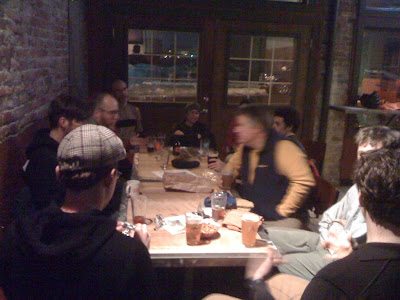 and of course after it was all over i decided to ride up the steepest damn street in town which gets you up the entire south hill in like a block and a half and I don't know the name of it but it goes by the conoco station on third across the street from the restaurant that is something different every other month but I think right now it's a sushi place maybe but anyway this hill dumps you off right on the doorstep of sacred heart which is appropriate and now my quads are wasted and my knees hurt and my lungs are seered and i'm so glad be be back in my town, amidst my people, all re-bike-ified
Posted by Pat S at 10:35 PM 3 comments:

From the Thursday edition of the SR:

Matt was the bicyclist involved in the horrific collision at 4th and Lincoln in early October.  He was riding down Lincoln on his way to work at the Apple store downtown.  A minivan, eastbound on 4th, had stopped at the stop sign and then proceeded to cross Lincoln in front of Matt.  He had no time to stop and collided with the van.  His injuries were extensive and his brain injuries were particularly devastating.

I didn't know Matt personally.  My understanding of the events as described above are based on information in SR articles here and here, John's blog posts here and here, and some information on the KREM website here.  I don't know anythying about the status of the official accident investigation.

But the accident hit me hard from moment I first heard about it.  I feel like he's "one of our own".  It's been heart-wrenching to follow along with him since the accident on a blog created by his family and friends here.  His sister's care and love and efforts as his advocate have been courageous.  My condolences go out to her and to all his friends and family.  If you're so inclined, you can throw a few dollars their way, using a link on the site.  I'm sure the expenses have been staggering.

The Pat S method of brazing self-instruction has left me plateau'd for a while, skills-wise.  Suddenly and unexpectedly, that's all changed within the last coupla weeks.  Reason being, Glen's been dropping in on shop night and packing all this great instructional shit about the right way to braze and I've been soaking it up.  These next two pictures are first-pass joints. It's kind of hard for me to believe I did them.  They're a long way from perfect, but they're so far removed from the method of spilling brass all the hell over place and then filing it off that I've been using. I'm excited that I know a little more about what I'm supposed to be doing/seeing and motivated by the next plateau that a little practice might get me to. 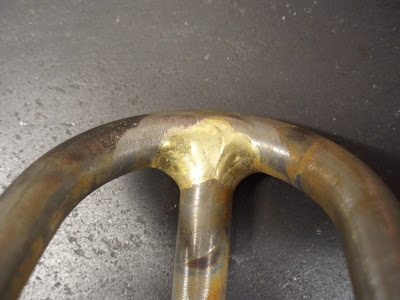 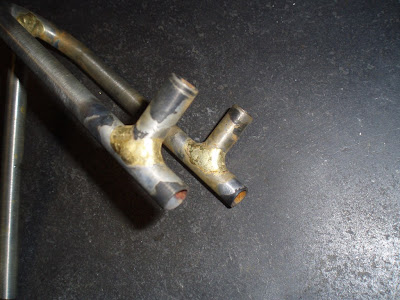 So that's huge, but there's more, and it is. More huge.

Tuesday last, Glen walked through the door with the Braze-O-Matic 5000. 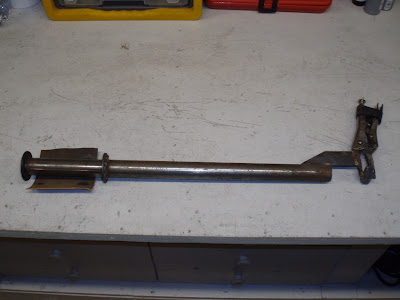 It's where art and science meet, and here's how it works: 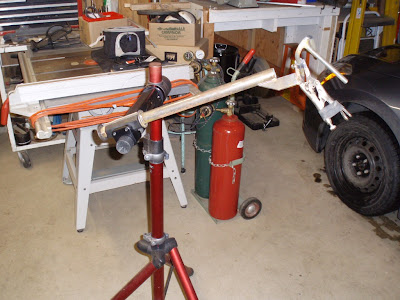 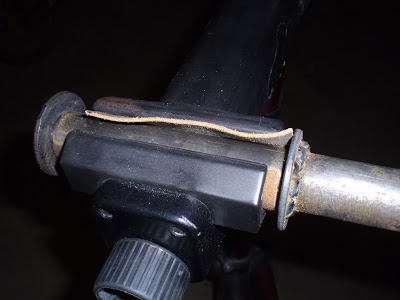 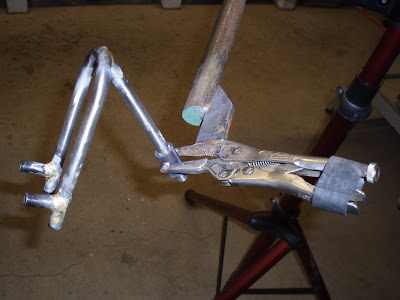 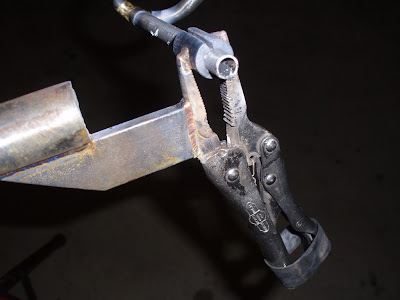 You set all the clamp points on the workstand and the Braze-O-Matic 5000 just tight enough to still be barely loose and it basically allows you to effortlessly position the rack you are working on at the proper orientation to allow the molten brass to take advantage of gravity and end up where it's supposed to.

So in short, Glen walked in and quickly identified and then helped provide solutions for the two biggest things that were holding me back from making better racks.  Damnit. So rad.

You're obviously wondering what ingenious bike part I put all these new skills and methods to work on. 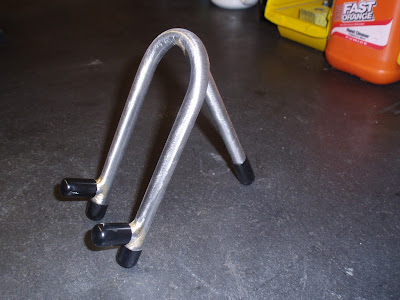 Sorry to tell you that it's not a bike part. 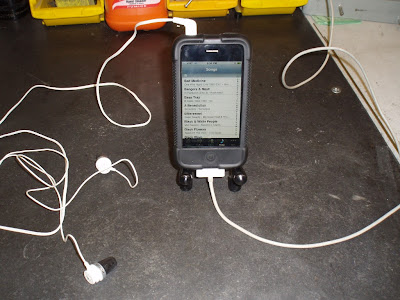 You obviously had me pegged as a one-dimensional bike freak.  Bet you feel like a dork.  Hey, don't sweat it.  We're all learning as we go.
﻿