I suppose I should apologize for my absence.  But I'm just not feeling it.

What I would like to say is that it's great to be hanging out with you here again on this most humble of virtual venues.

I built a bike jump in my backyard starting last night and finishing up tonight, which is, I guess, the impetus of this post, if not the true subject. 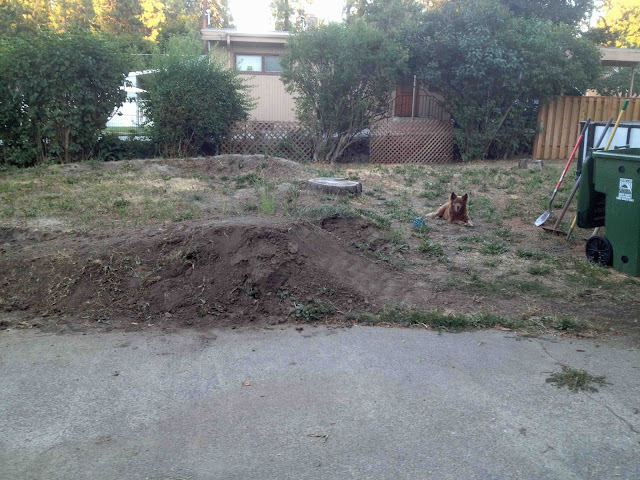 The backstory is that the pump track that I put together about 3 years ago, with the help of friends, is scheduled to soon go away forever, with no trace left.  It has become time for me to "grow up".

Many would say that this sentiment is long overdue, and that a man my age was wildly immature for building it in the first place.

I would like to counter that notion with a little story from my way-past . . .

When I was 12, I "ordered up" a Tonka mobile crane for Christmas.  I was way past the age when a boy should be playing with Tonkas of any kind, but "Santa" indulged me.  The thing is though, this crane was an advanced piece of machinery, and there is no way in hell that any 8, 10 or even 11-year-old would even have a clue as to how to maximize its potential.  A certain amount of maturity was requisite, and I had it, and I knew it.  No apologies.  Did I play with it for the next 3 years?  Hell no.  But for the next 6 months, I was industrious as hell at the helm of that fine piece of equipment.  Not a lot of friends came around during that period, but whatever.

So, can anyone build a pump track?  Why yes, of course.  But can anyone do it well??  I think possibly not.  It might just take someone with a certain amount of life and technical experience, as well as a furious pent up need to commune with a weird bunch of freaks who have a latent desire to ride in circles without pedaling.  And an even stronger need to do it well, in order to please the freaks.

Could I have pulled this off as a younger man?  Probably not, I submit.  So my maturity empowered my immaturity.  Chew on that, if you will.  And in the meantime, let me once again refuse to apologize.  I have no regrets about "doing" the pump track.

Work has been totally bugging me.  As in the need to show up by 8 and stay until 5.  Say politically correct stuff.  That type of thing.  It occurred to me just yesterday that the prescription was to build a jump on the pump track site.  Not sure why I didn't think of this sooner.  It turned into a 2 evening project. 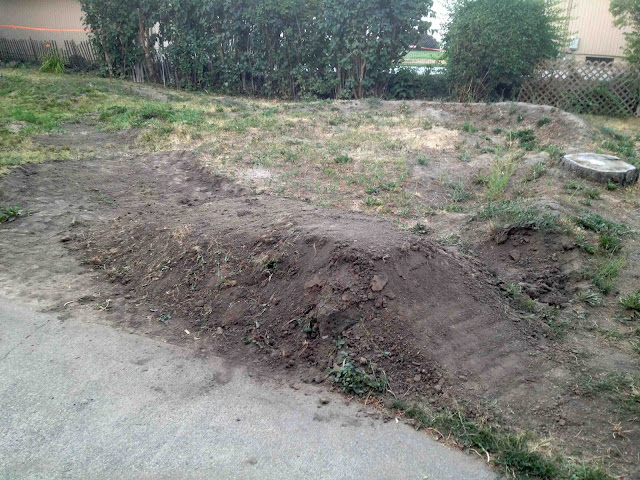 Brandy was on board the whole way.  Unlike the rest of you bastards, she never questions me.

Once the jump was fairly roughed in, I employed the massive footprint of the Blackborow to ride it into shape. 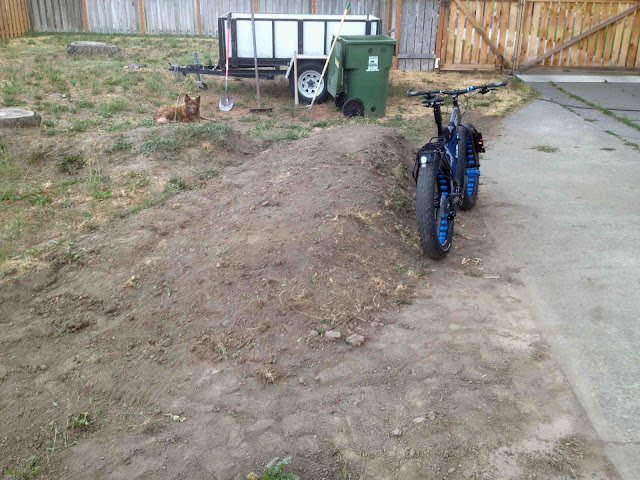 Eventually, the mighty Bucksaw came out to play.  Brandy is the poster child for the axiom that negative attention is better than no attention at all, and as a result, I spent the entire jump session dodging her presence in either the approach or landing zone.  Despite the hindrance, I freakin' skied!  Wish I had pics, but alas, no other party was around to run the iphone cam.  You will have to trust me on this. 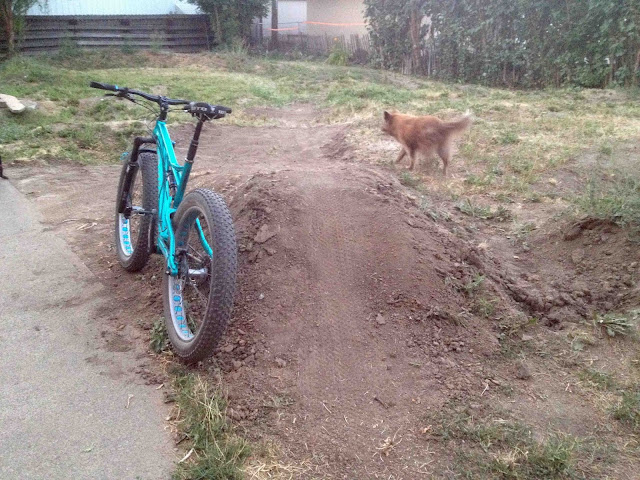 While I do recognize that this last-ditch effort to exercise my dirt-moving freedom is largely symbolic (as in flipping the bird to the maturity establishment), I am also quite intrigued by the scientific aspects of the endeavor.  I'm not a bike nerd in any respectable sense of the term and I actually get quite bored by a lot of bike nerdy topics, but the whole deal about the shape of the ramp and the launch trajectory is currently fascinating to me and is probably something I will be playing with over the course of the next few days.  So clearly, I am not a nerd, to reiterate. 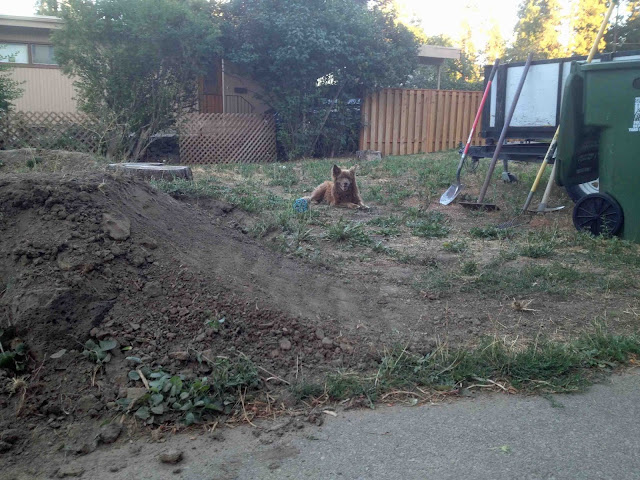 The way that the jump works is that you have to go out into the street to get a start, and then haul ass down the driveway, swerving around the dog, and hope you get enough speed to launch.  My neighbors will be observing an overweight, middle-aged dude doing this over and over again, in the high-90's heat of the coming weekend, if everything goes as planned.

But the feeling that I need to apologize still eludes me.
Posted by Pat S at 11:01 PM

Is the removal of said pump track going to involve rental of a bobcat-type device? We're in for a day of rental if you're going to be towing one around...

Glen, sorry. I've got a landscaping crew coming in to redo the front yard and they're gonna level the pump track while they're at it.

You should mount the Black Floyds on that thing for lower rolling resistance. Where you're going, you won't need traction!
- Ventura

No pond to land in?

Hello. You Mentioned that " a man my age was wildly immature for building it in the first place" I completely disagree with you.

With the demise of the Bike Hang pump track, is it perhaps an apt time to to take the love and experience learned on this track and turn it into a lobbying effort to ask the City of Spokane to include a paved, professionally built pump track as part of the replacement for the UTF Skate Park?

The new "Wheel park" has several potential spots listed, and if we are keen, there is no reason why we should not have a Brooklyn bike Park Pump Track built into this effort. Even if it takes a Kickstarter campaign to raise a few funds, i think there are more than enough stakeholders who would be psyched to make this happen. Check out the video if you have not yet:
http://www.brooklynbikepark.org/

I read and enjoy your blog on a regular basis. I especially like your trip reports, and think a pump track looks like a great deal of fun. As a fellow child of advancing age, I urge you to never grow up. I don't plan to.

If the next act of not growing up involves building a wall of death can I come over?

You could be qualified to receive a Apple iPhone 7.