Sometimes, if your wife wears the pants, fear can make you say the craziest things. Like for instance when, a coupla months ago, I told you that the Secret Bike was the last bike I would ever need. Insanity - you know it and I know it. But at the time, I believed it. That's how spousal fear can twist your mind.

Today, I set the secret bike free. There are two reasons I did this:

1. I have Xtracycle fever.

2. That bike caused me nothing but pain.

Let's talk about number one. In today's economy, my rule is no new bikes unless they are financed through the sale of existing bikes or parts (or various other devious methods). The secret bike had a cash cow bullseye on its back. How unfortunate for it.

Now let's talk about number two (not that number two). We raced together twice and practiced once. And while we were un-freakin-believably fast together (and I will see to it that this un-truth becomes the stuff of legends as the years pass), the total time we spent together was one hour and 57 minutes of pure torture. For me, not the bike. Actually, I think the bike enjoyed it. And that's why I enjoyed selling it on Craigslist for a hundred bucks more than I paid for it on Craigslist. I'm sure it will succeed in making someone else's life just as miserable as it made mine and as I pocket the cash, I'm fine with that. 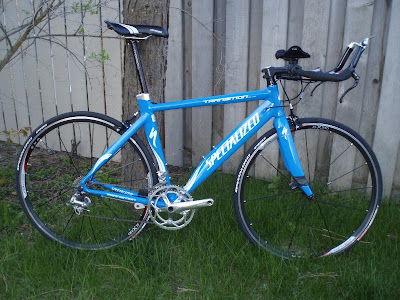 There was no tearful goodbye, just the exchange of currency. Godspeed, Secret Bike.

Now for this: All 26InchSlicks silliness aside, tomorrow night is a big deal at City Hall, as there will (hopefully) be a vote to incorporate the Master Bike Plan into the city's Comprehensive Plan. I say hopefully, because all kinds of crazy stuff happens at city Council Meetings. I was there for the last go-around when the vote was tabled and honestly, that could happen again.

But here's the deal. There is a group of smart bike people with great energy and vision and political savvy that have been putting in untold hours to get to this point. I hear Spokane cyclists wondering what they can do to further the cause. Showing up tomorrow as an obvious and respectful cyclist would be huge.

That's my pitch, but for way better information , go here. I hope to see you tomorrow night.
Posted by Pat S at 8:52 PM

Good luck this evening. Wish I could be there.

Hank, no vote last night. Another week of accepting written comments to stall for time to allow last minute tweaks to the MBP. Just a little more time to make sure it's right before it's set in stone. A vote schedule for June 8th, I think. And so it goes.

SRV, I'm taking that as a compliment. Since throwing in the towel on racing I'm preserving my ego by going with the concept that it's not how you ride, it's how many you ride.

Xtracycle huh? I just happen to have a lightly used one that I don't need anymore. I'd let it go for $160 shipped to Spokane. All you'd need is longer cables and an extra half a chain. If you're interested shoot me an e-mail:
jerry.wick(at)yahoo(dot)com.

Jerry, the Xtracycle is alive and it rocks! Thank you.