I'm asleep, not dead.  And when a really good bike story comes my way, I have a bike blogger obligation to wake the hell up and tell it.  The rules are the rules.

Read on then, patient and gentle blog follower . . .

The moon on the breast
Of the new fallen snow
Gave the lustre of mid-day
To objects below
[Okay. This stanza doesn't really belong, I admit. But when you have even the remotest chance to use the words 'breast'  and 'lustre' in the same paragraph within your bike blog, you just do it. As if you owned Nike.  The rules are the rules.]

He was dressed all in fur
From his head to his foot
And his clothes were all tarnished
With ashes and soot
[Okay. I've embellished again. Bad me. But just imagine Glen in this light and then tell me I'm wrong for introducing the image. I'm trying to weave a story here, give me a break.]

Now Pugsley! Now Pug-Ops!
Get out of your crates
You've found your new homes
And it's gonna be great!

The surprise on John's face
When handed his steed
Was the stuff that this season
Is built on, indeed.

So in only slightly more coherent fashion, here's the deal . . .

Glen owns and runs Elephant.  John helps him, in his "spare" time.  These two guys are both really, REALLY passionate about bikes.  I don't pretend to know anything about the business or the details of how they interact, but it's pretty clear that they really appreciate each other and that each others' decades of  two-wheeled fixation and accumulated knowledge and experience have come together to evolve the Elephant effort into something amazing.  It's a huge privilege to hang out in the shop and listen to them talk about what they are doing and what they see as the future of what's cool and right in the world of bikes.

So this past weekend, as I understand it, Glen and his wife Krista are out and about . . . and happen to run across a bunch of fatbikes in a shop . . . and happen to get some wild idea . . . and before you know it . . . two new fatbikes are in the mail.  One for Glen, one for John.  Which is so damned smart . . . fatbikes are still niche enough that's it's three times as much fun riding your fatbike with another fatbiker as it is riding your fatbike alone.  (Although riding alone is still pretty much a bushel of fun, let's be real.)

So Glen went through a few scenarios about how to surprise his buddy, and in the end it was a small hang at Elephant headquarters tonight.  The execution was superb, which resulted in a stymied and tongue-tied Mr. Speare, which is a rare feat. Even if for just the few seconds it lasted. 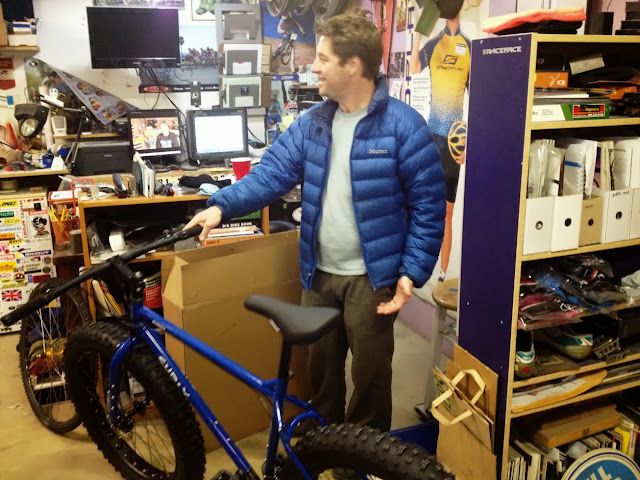 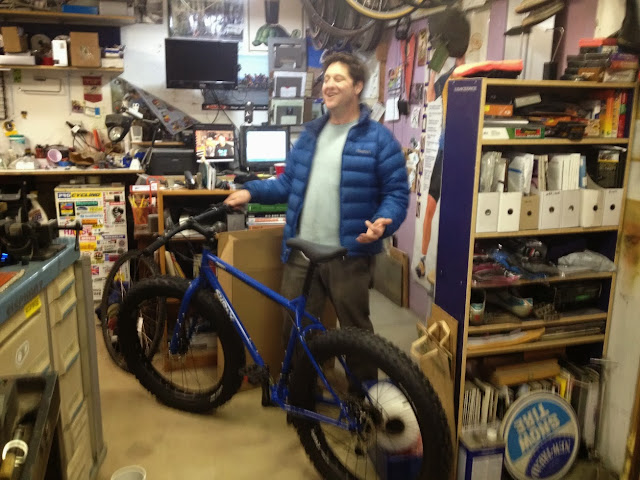 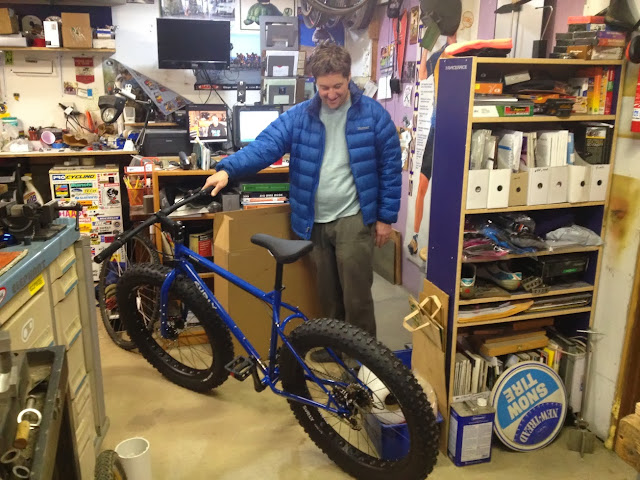 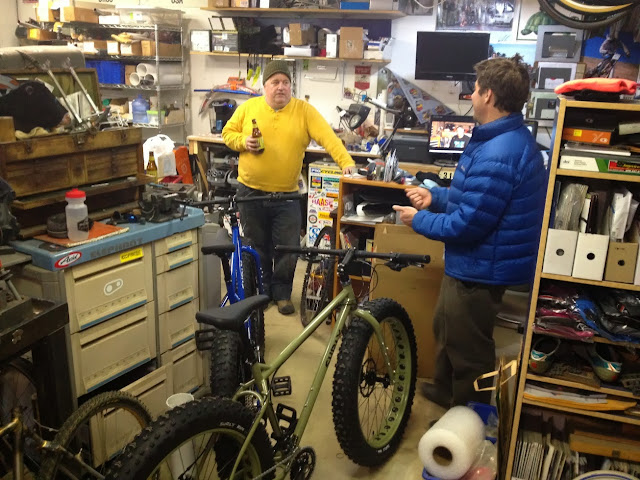 And of course I'm very excited that a couple of guys I really dig have joined the fat fold.  I think they're/we're in for a lot of fun.

oh man. what a great thing. all of it.

Fantastic story Pat. Thanks for posting it.

best news of the day!

Thanks for sharing Pat! Warms my heart on a frigid December day.

Nice that something this cool has roused you from slumber. Very excellent of Glen for pulling off such a surprise. Looks like Spokane just got a little fatter, in a good way.

Pugsley gifting has replaced the brohug.

If my bro gave me a fattie, I'd hug him til his liver pooped out.