"Pat S is a douche."  If I've heard it once, I've heard it a hundred times.  And it's an argument that's kind of hard to counter.  I mean, what kind of a scumbag bike blogger would post up three out of four days of his bikepacking trip and then fail to, umm, finish?  For like MONTHS??

It's not like I haven't felt bad about it.  I have.  Terrible, in fact.  But rectifying the situation is not as easy as one might imagine.  Once you've let people down, you can't just suddenly say, "HEY! Here it is!"  That would make you, like, a super douche.

What a guy needs, is a recovery strategy.  And what better opportunity than New Year's Day.

Let it be known then, that I, Pat S, hereby resolve to finish the blogging of the Colockum Quilomene Traverse.  [Right hand held high, as I am sworn in by your overbearing and demanding asses at this exact moment.]  Let us begin immediately, then.

Here's the link to the previous post in this saga, just in case your memory is not overwhelmingly fantastical:  Colockum Quilomene Traverse - Day Three, Part Two

After the wildly windy night, day four would be the conclusion.  In some form, some flavor.  I had somehow gotten it into my head that from Whiskey Dick Bay, we would just cruise a few miles downstream into Vantage on downward-inclined roads, with the wind at our backs.  But as you know, I am a douche.  The actual route back would require a climb over Whiskey Dick RIDGE, as illustrated below, and would therefore require additional monumental effort.  Damn. It.

The first order of business would be climbing out of the hole that was Whiskey Dick Bay.  Randy was up for the challenge.  Or maybe, it was the fact that he didn't have any other choice. 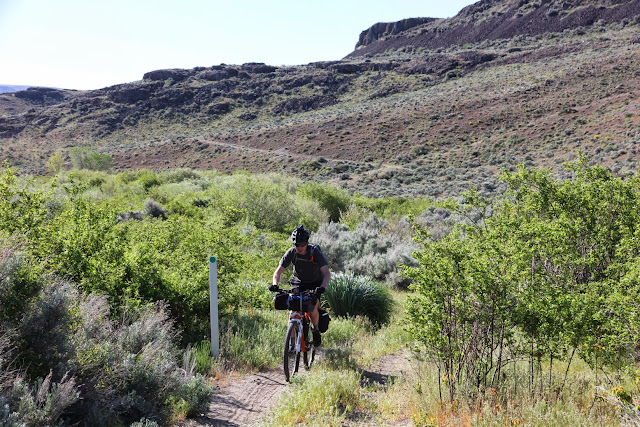 Stu was not far behind.  For the same reason, I suppose. 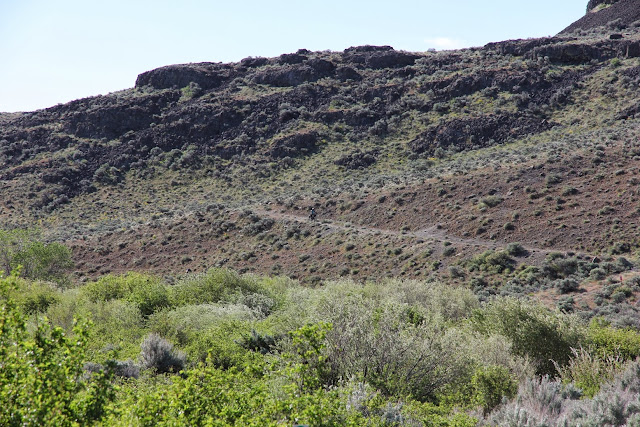 It wasn't long before we had climbed far enough to secure a proper view of the righteous campsite that had serenaded us through the winds from hell.  Meg and Steve had just totally set us up on that frightful night.  What a sweet spot. 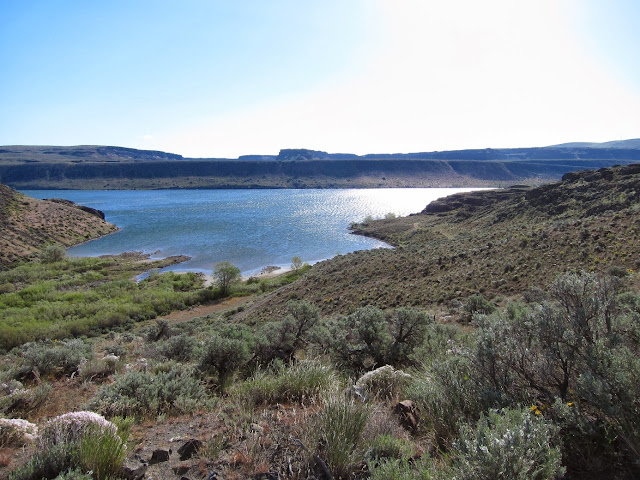 We continued to climb and climb.  And climb.  It didn't hurt at all.  I don't have the soundtrack, but Ward was whistling as he rode.  Something from Mary Poppins, as I recall. 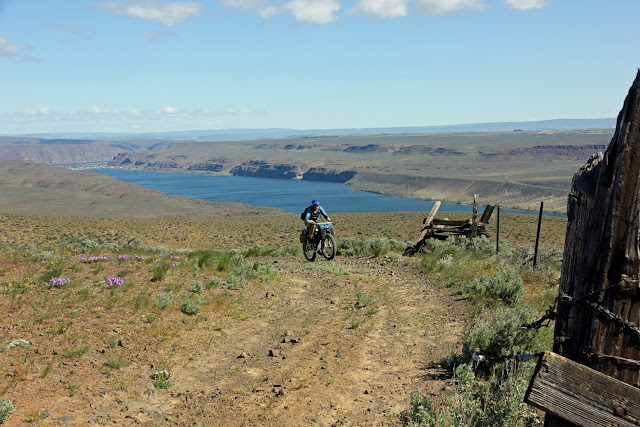 Somewhere between the 10th and 20th commandments, as I recall, is one that says you shall not covet your neighbor's (in this case, Meg's) Revelate Viscacha seat bag.  Apparently, then, I am going straight to hell upon my departure.

In the meantime, I think I will be ordering one of these this year.  I really need to cut down on the weight of my bikepacking setup and this solution just makes too much sense to ignore. 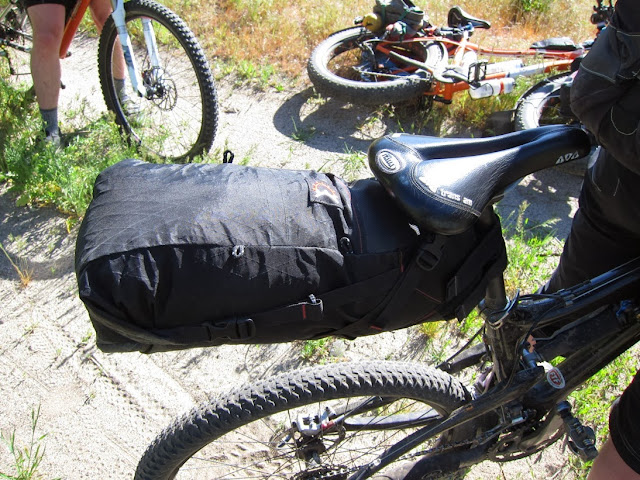 Another sweet meadow, if someone were so inclined as to put together a base camp-style adventure in this area, just sayin'. 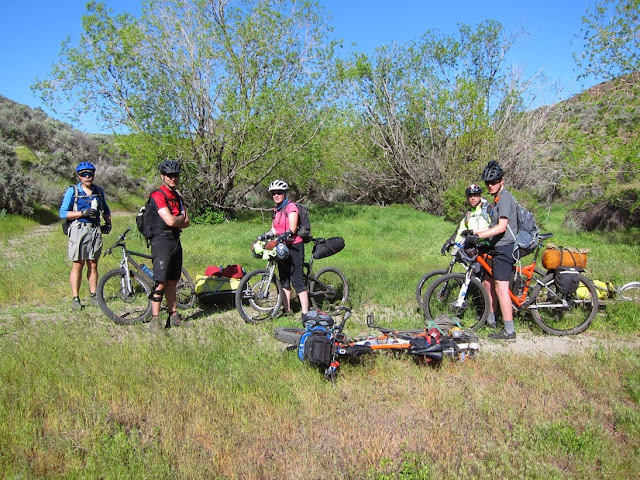 From there, yet more climbing was done, and on soft and sandy surfaces, no less.  Fat-tire jealously is hard to identify on the trail, as the proprietors are prone to conceal it, but the grinding of teeth could be heard, just barely, if one were to listen carefully. 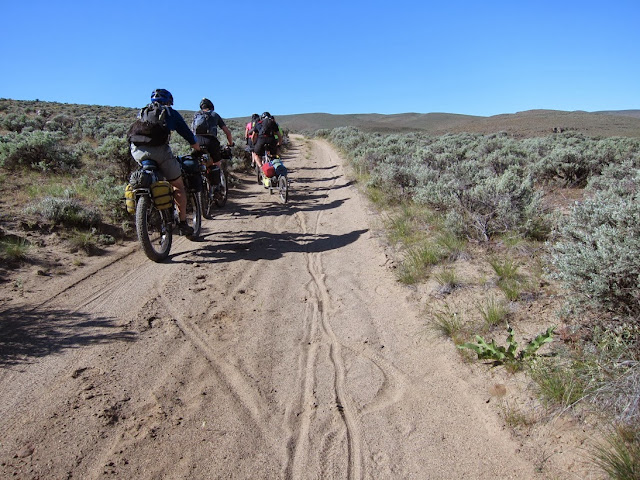 A home to something fairly big, and because of that, a cause for momentary acceleration. 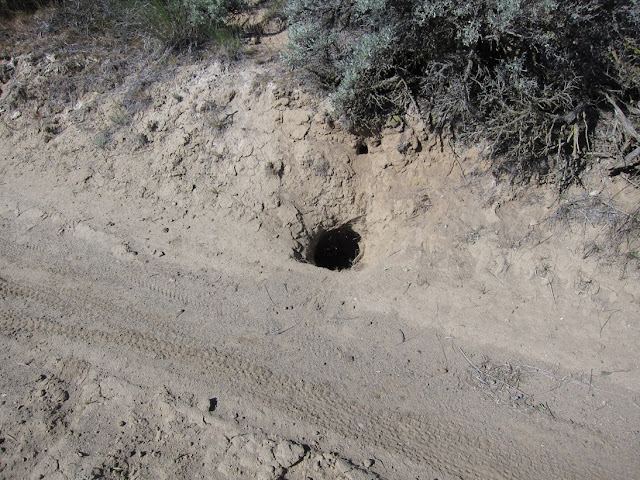 I have to say, in all seriousness and honesty, that the climb was the sweetest of the trip.  Maybe we were just so beat to hell that we had didn't recognize the difference, but I really think that this particular climb and the accompanying mood was special.  Damn, the view from the top.  The only thing that could make it any better . . . 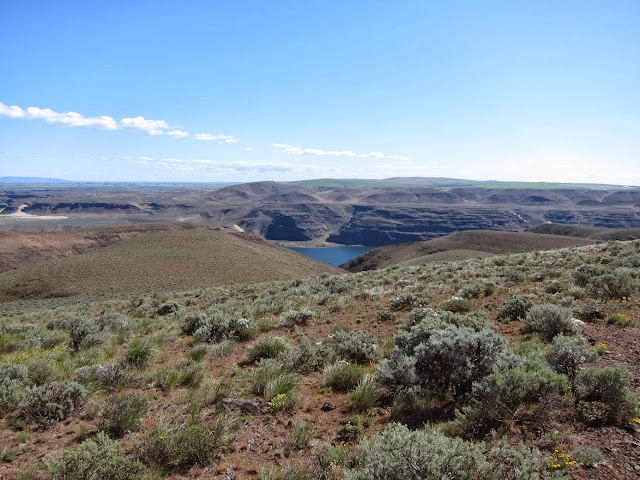 . . . would be the the juxtaposition of a coupla RAD, tour-tested fatbikes into the scene.  Hot damn! 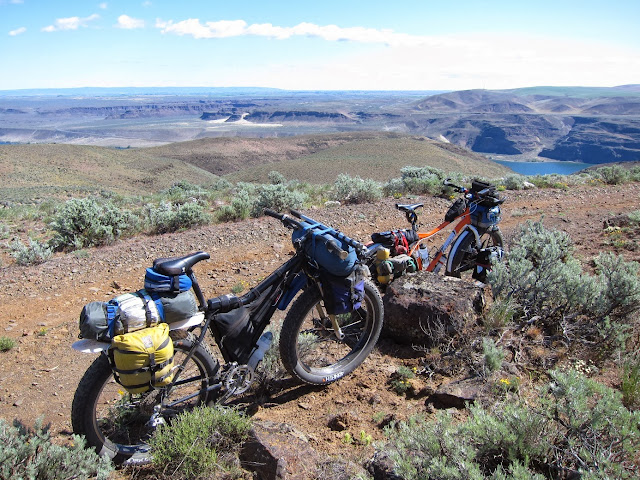 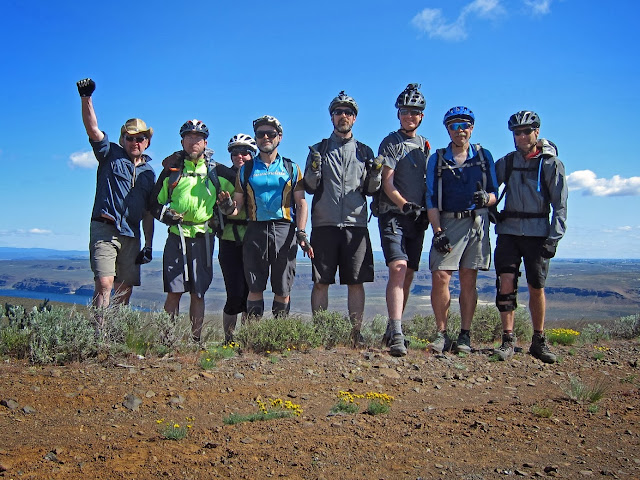 Photo-ops thereby taken advantage of, all riders proceeded upon the downward journey.  All three trailer boys are rocking the descent in this photo. 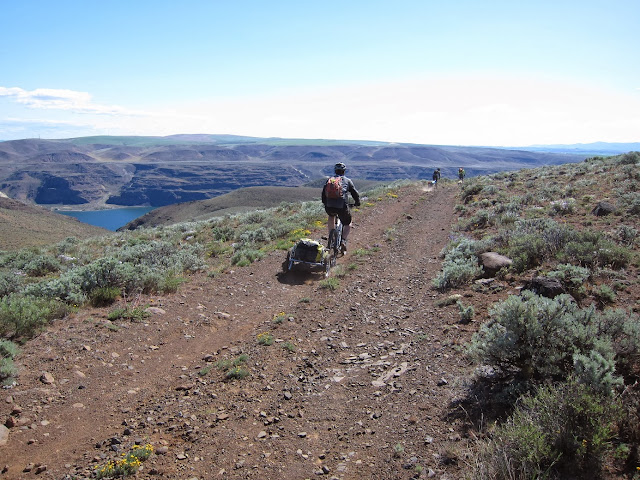 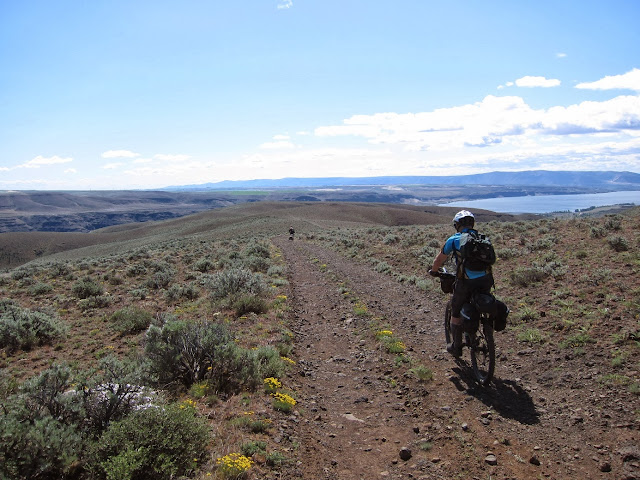 . . . until just a second or two later, Chris had one of his signature trailer-induced moments.  The kind where the trailer would flip over and snag on something, and launch him over the handlebars and into the scrub brush and rocks.  Harsh. 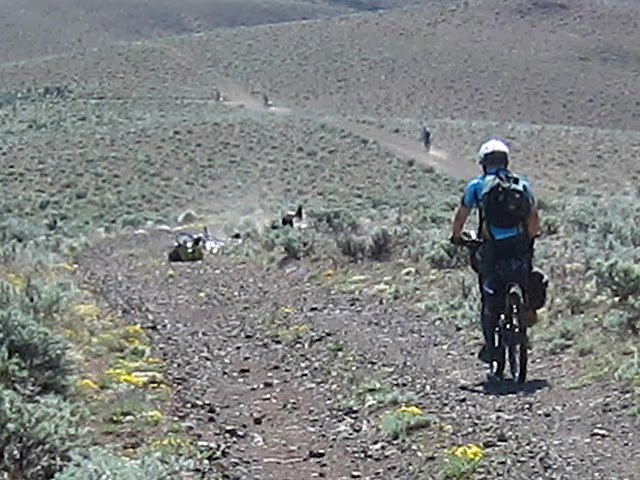 I don't know how to describe how great this view is.  But that's the Columbia just south of Vantage, on the right.  Hopefully the perspective captures the fact that we are going downhill.  We are gonna live.  Life is good. 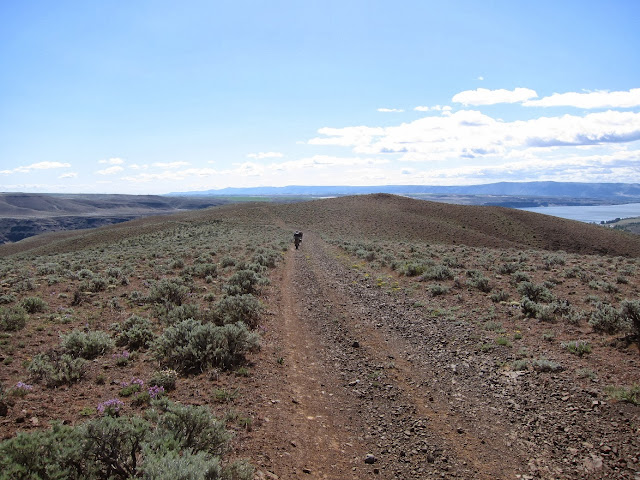 I know I've said it before, but Chris was amazing.  I rode behind him for a bit, just admiring the torture he inflicted upon his Chinese knockoff trailer and how he made it all look like it's how things are supposed to work. 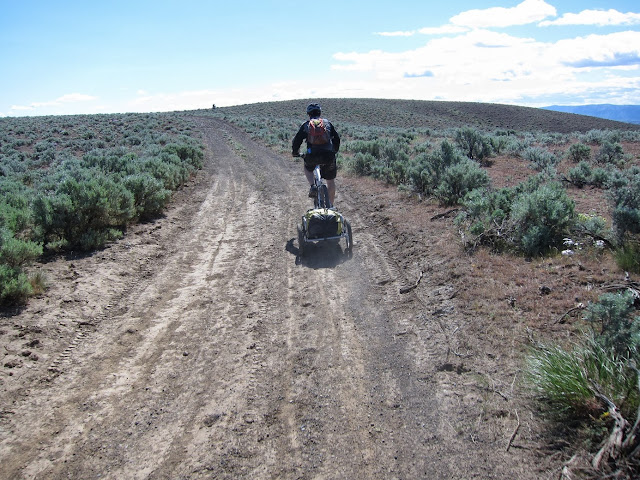 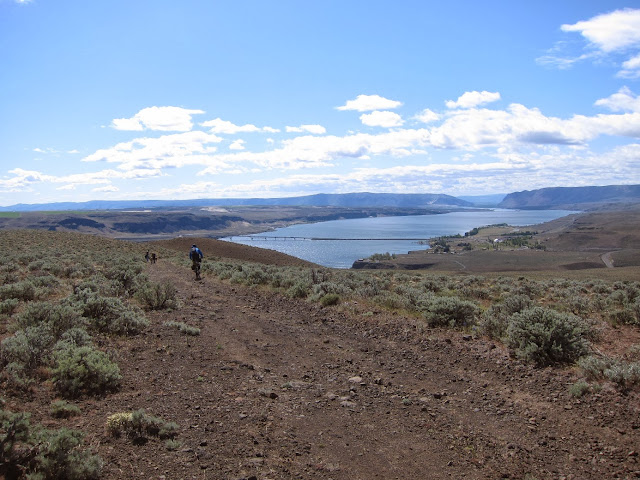 A sweet corral that caught my highly artistic eye.  Don't like the pic?  Feel free to bite me. 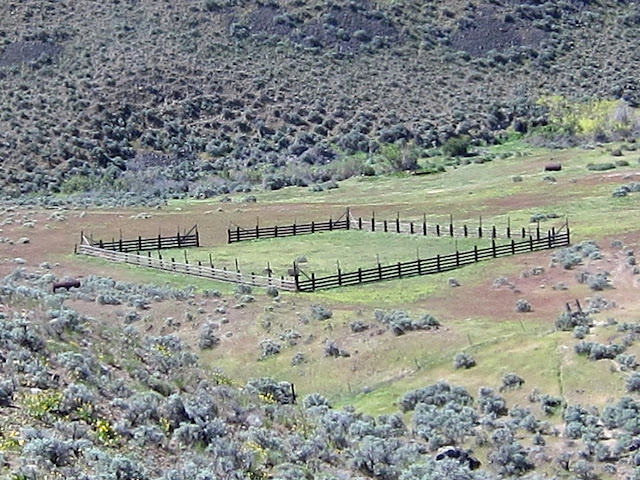 Randy and Ward.  Geez, these two guys rock.  No way this trip would have ever happened without their initiative and knowledge of the area.  My hat's off, gentlemen. 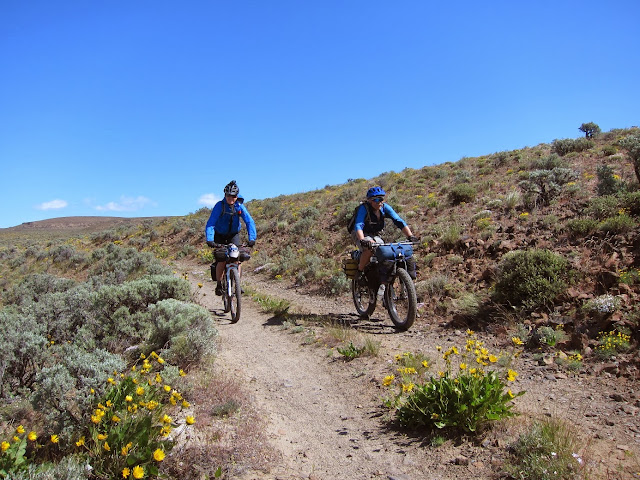 Tarmac felt funny, after all that.  And good. 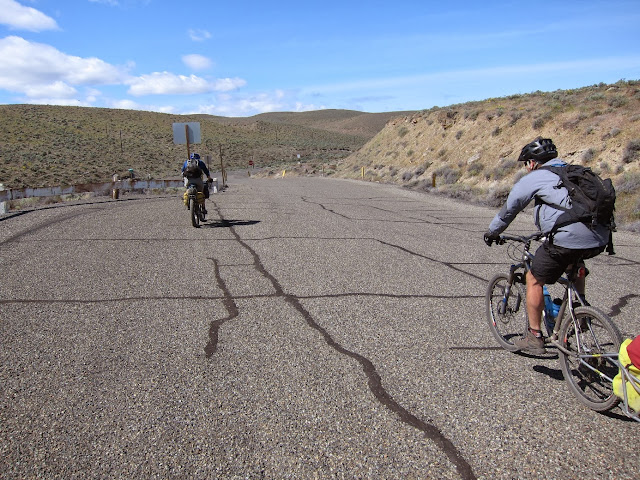 Yes, that's real blood and I am totally badass.  But you knew that already. 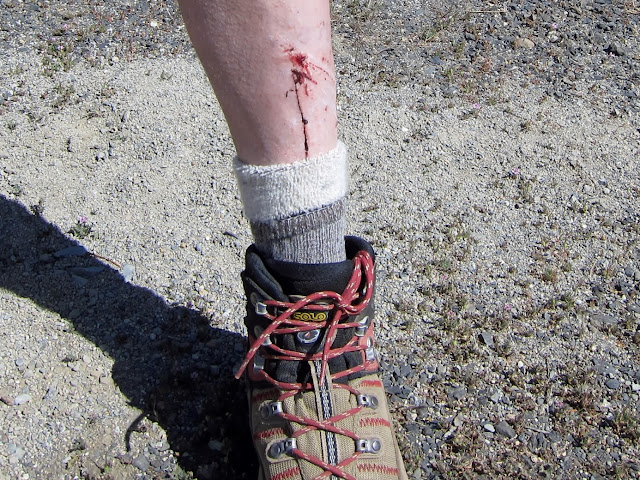 Here's the rad crew that emerged from the wild.  That's Steve and Meg in the middle, who came in from the south and set up camp and delivered ice cold beer.  "Beer fairies."  Look it up in the dictionary. 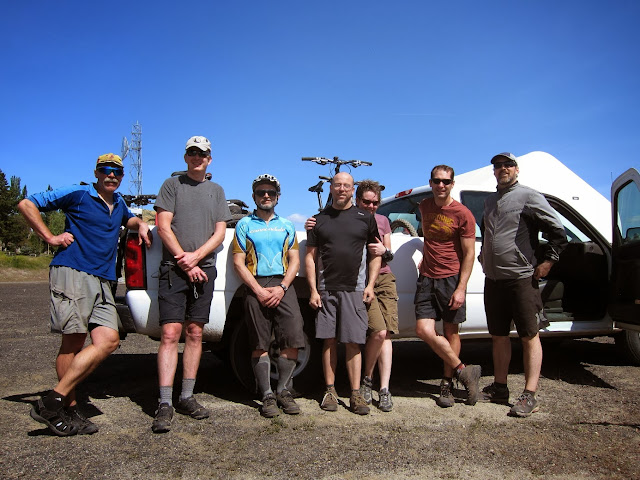 Here's the six of us nutjobs that went start-to-finish. 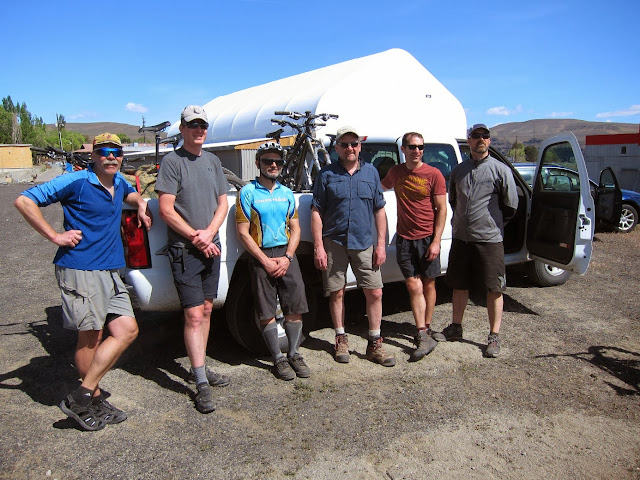 Look, I don't want to start bawling or anything, but I just feel totally lucky to live in this day and age where we have the technology to somehow connect with like-minded fanatics and pull something this awesome together.  It's easy to minimize the significance of this trip and what it was, but I think it was REALLY special and something that can't be easily duplicated.  I will always feel like I was extremely fortunate to be involved with this exceptional experience.  Thanks, guys.

So my New Year's Resolution seems to be complete.  Peezy!

In all seriousness, I want to wish you a fantastic 2014.  May it be full of really rich and meaningful experiences, whether they be bike-related or otherwise.

Thanks man - good job on the resolution.

Somehow I missed the part where Chris went down one last time.... and I feel guilty right now for laughing at that. Sort of.

Since it's all burned now the poison oak situation might have changed, I'm HOPING for the better- although it may use this mild winter to try to take over the universe. :/ I'll try to get out there as soon as the clay solidifies and check things out.

Glad you captured the enduring durability of the chinese knock-off; and its operator. This resolution was worth waiting for Pat, esp since the fire.
I too feel very fortunate indeed. And the pack job I had to do for that trip, rivaled even packing to summit Raineer.
thanks to all seven of you

Wow Pat! And you are anything but a doosh bag!!

More than likely, we were the first to bike pack through both wildlife areas in one trip. Hopefully we won't be the last. I feel like it's kind of a "classic" route as it takes the straightest line possible from North to South and travels from the Wenatchee area to Vantage. Would make for a challenging adventure race route for those who are so inclined.

Through the '90's, several of us made it a point to take some sort of trip out there every year with the purpose of riding every ridge and valley that had a "route". At that time our traverese wasn't posible due to private land holdings. The "land swap" that made this trip possible is what drew us back out there.

Already talking about returning this Spring. But this time thinking about a simpler plan... at least as far as the shuttling is concerned. Thinking of parking at Vantage again... and starting and finishing the ride there. Although we may add a simple shuttle up to the wind farm visitor center as a "boost" (if we can find a "truck friend" with the day off). This year, hoping to spend some time along Beacon Ridge and the higher elevations of the area (big views!!) and then pick a canyon or ridge route (or combination of both) to drop down and return on the remainder of last years route... anybody in?

Cheers everybody! Happy New Year and thanks again Pat and everybody else for making this my most memorable bike trip EVER!

We're also using a now discontinued sling from Bedrock Bags + Thermarest gear view dry bags* for the handlebars. The space limitations of this lashup will force you to take absolutely minimal gear. I did a solo 2 night/3 day bikepacking trip into the Teanaway this summer and was soul grateful for not having any more weight than I did once I got into multiple sketchy creek & blowdown crossings & one section of almost non-existent trail.

* If you want one of these, order it NOW from Campmor etc. Looks like Thermarest isn't making them any more... they've swapped over to a lighter version that I'm suspecting may not be quite as durable.

The Viscacha is an incredible piece of kit. Absolutely cavernous. I can fit all of my clothing, my bivy, an ultralight tarp, and my sleeping pad. You won't be disappointed.

great write up and about time! i thought I just missed the last day. One problem though now I have another paranoid bike riding fear to go along with the premature derailleur hanger failure phobia: the trailer-induced rollover.