The title sounds kind of, uh, governmental, I know.  Maybe sinister even, if you're of a conspiratorial bent.

If the google machine brought you here to show you Senator Antoine's annual farm subsidy report, or the results of the Antoine Commission's investigation into the CIA's activities in Kiribati, my apologies.  You are in the wrong place.

If, however, you're wondering about midwinter riding conditions in the Antoine Peak Conservation Area, you're in exactly the right place.

I've been a dull working boy these past weeks and months and left work yesterday with a particularly strong jonesin' for some exercise.  I've also been accumulating some soft packs over the winter, as I plan to convert my fatbikepacking setup from a rack-based system to a Revelate-style system, in order to reduce the obscene  weight of my current setup.  And then there's my photographic gear, which has been sitting under a serious layer of dust.  I thought an exploratory trip out to Antoine would be just the ticket for getting a little exercise, shaking down some of the new gear and remembering how to trip a shutter.

I was hoping . . . that because it's so dry down in the valley, that the road would be somewhat rideable to the top.  Boy howdy, was I dreaming.  It was absolutely FILTHY, and not the wholesome-healthy-pure-goodness kind of filthy.  But I'm getting ahead of myself.

From the parking lot, it looked to be all systems go. 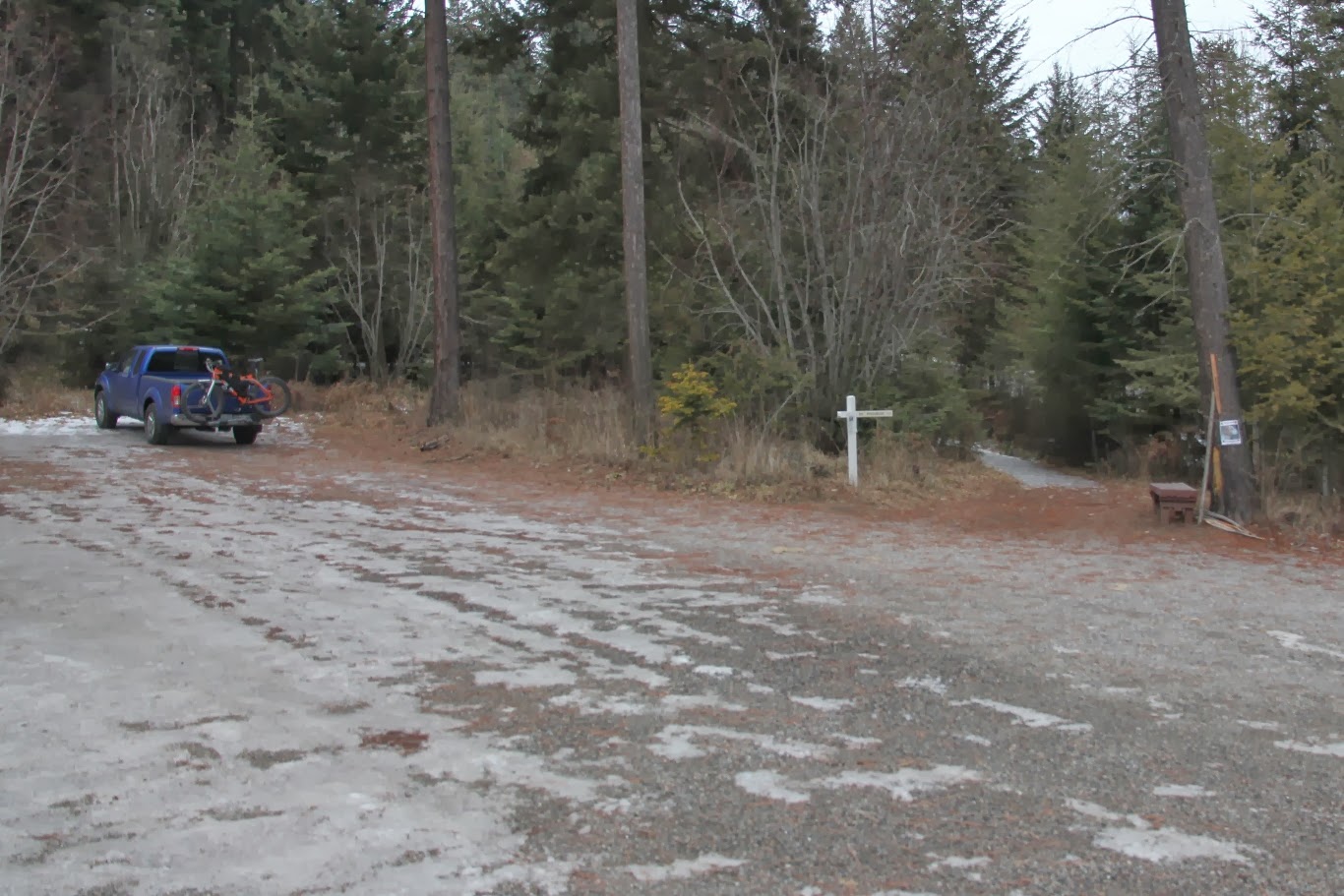 But less than 20 yards in, the harsh reality smacked me hard. 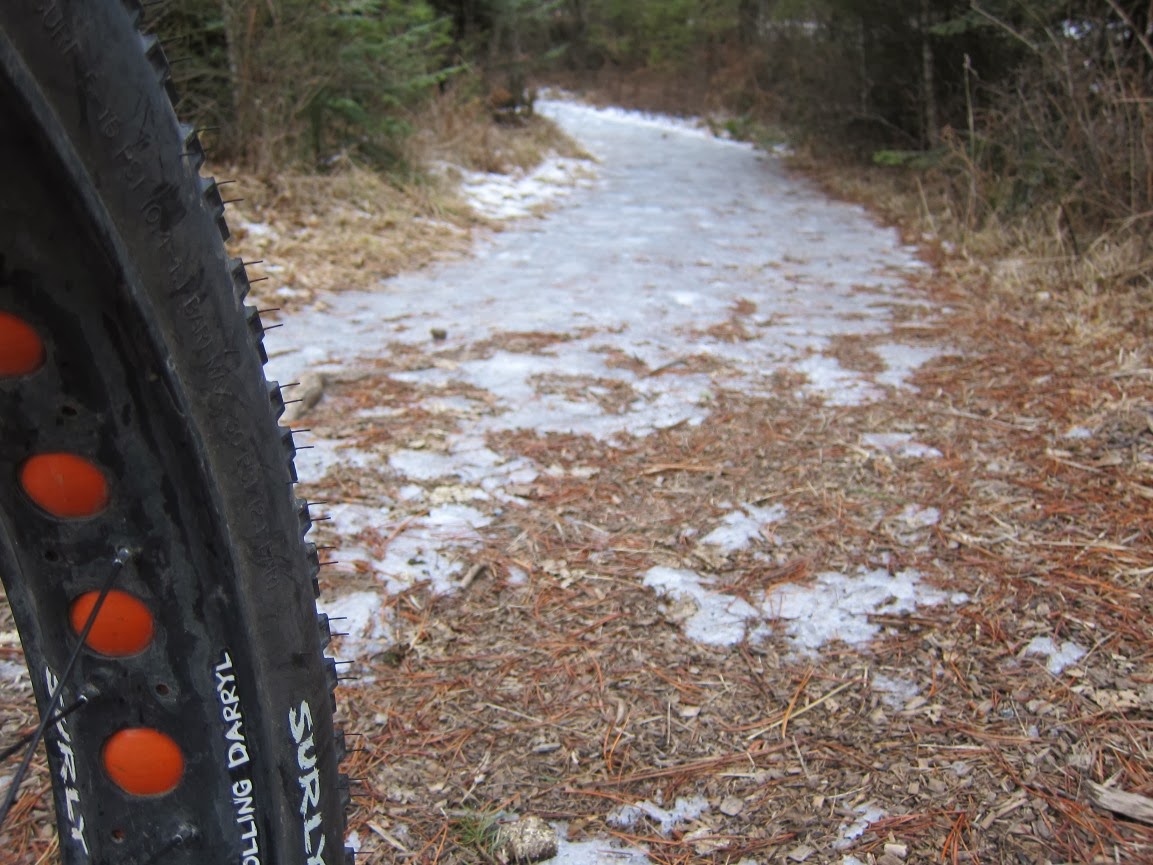 If you are familiar with Antoine, then you know that the initial rise out of the parking lot is one of the steepest sections of entire climb.  On this particular day, it was the victim of previously foot and paw-packed snow that had subsequently gone through several freeze/thaw cycles and was solid ice that stretched so far from edge to edge, that even at the perimeter, there was no path that offered any amount of reasonable traction.  I couldn't stand on this shit, let alone ride it.  I was wishing I'd brought crampons.  I actually had to bail over the edge and onto the road that parallels this first, short section. 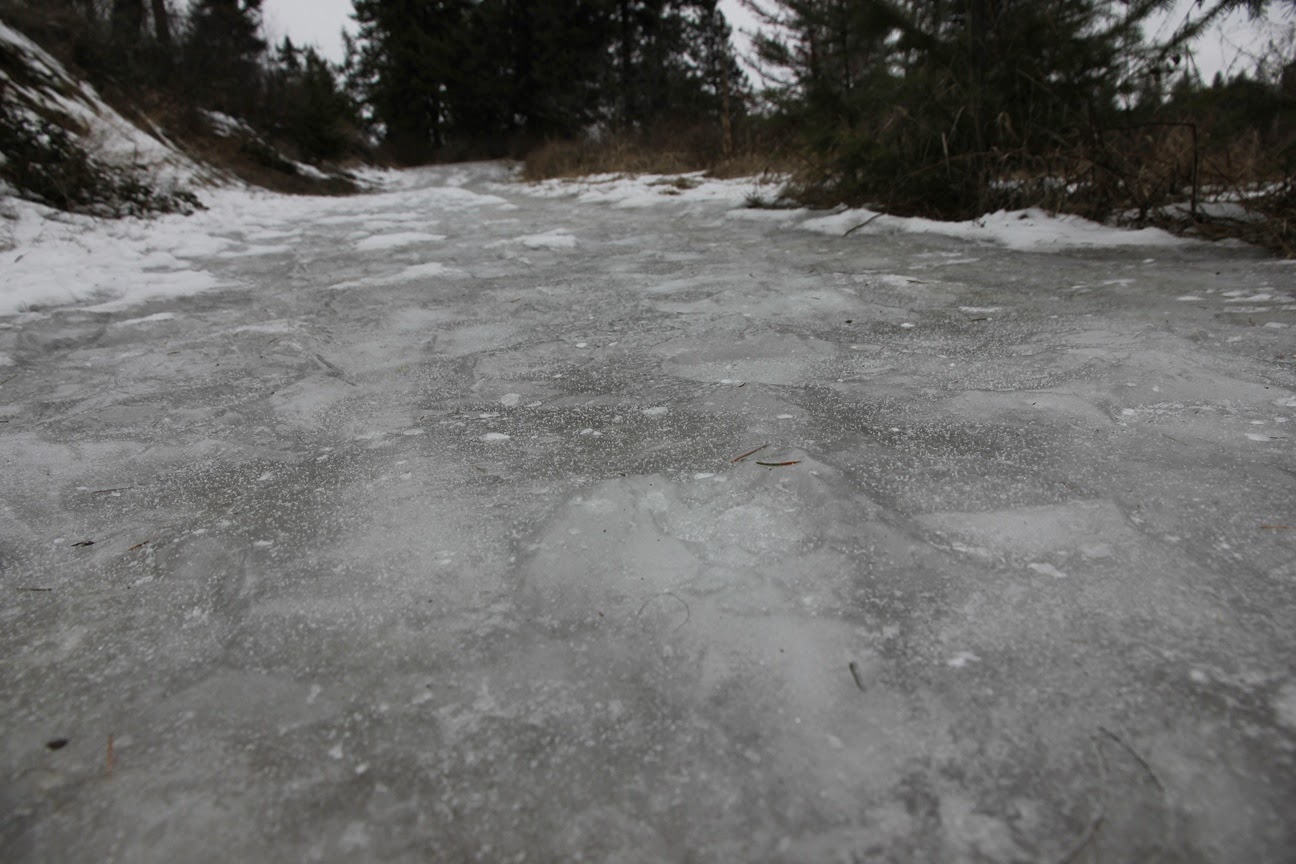 My modified hope, at this point, was that since most of the traffic that had created this ribbon of a skating rink was foot traffic, I might be able to get past the ambulation range and into something that if not pristine untracked snow, was at least rideable.  At the Middle Road fork, things were still pretty icy.  The edges look rideable in this next photo, but they really were not, for the most part.  I was hike-a-biking through all of this, with just barely enough room to walk at the edges, while trying to keep the bike upright on the ice just next to me. 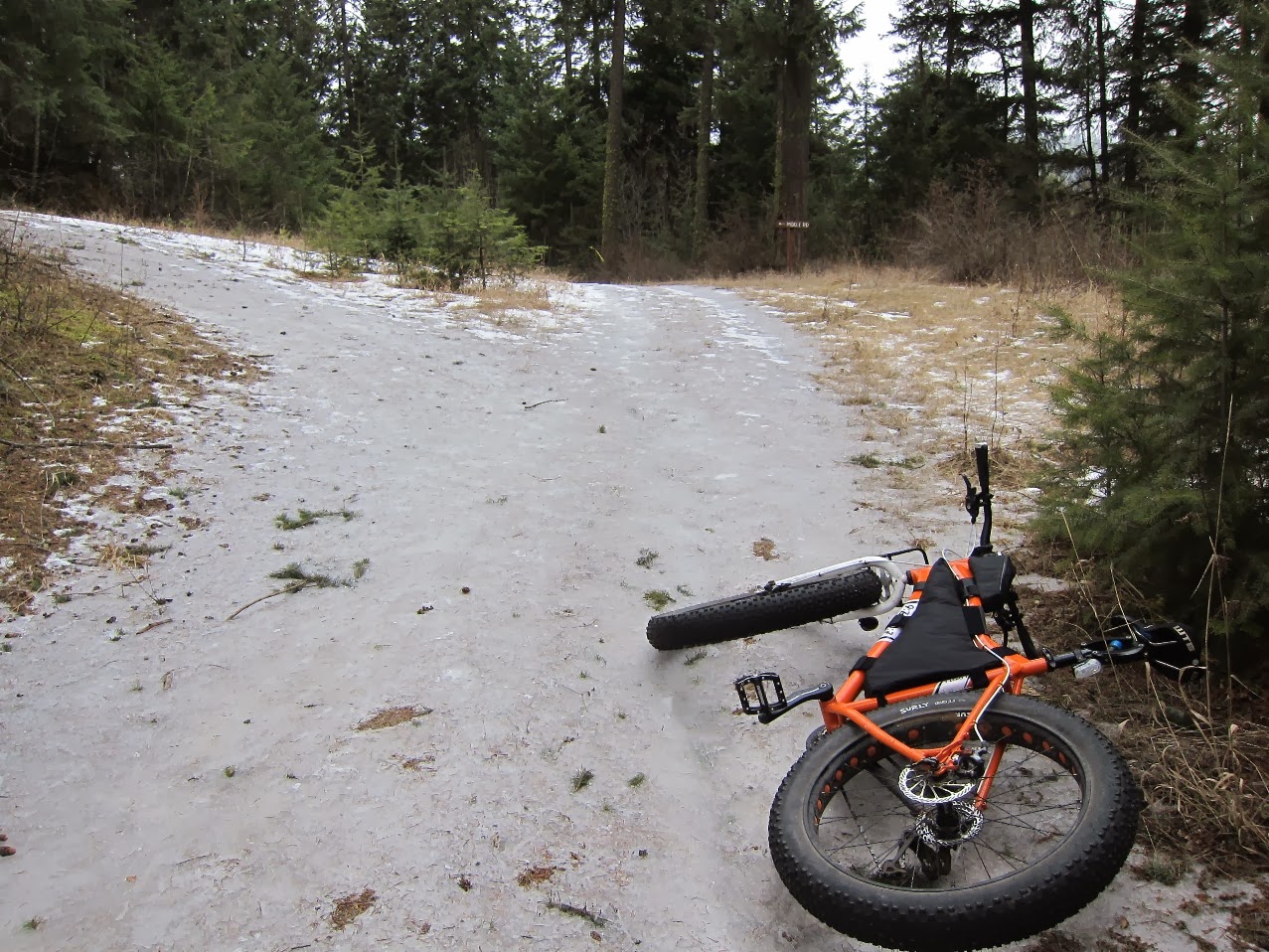 Eventually, I was able to spend some on-and-off time in the saddle and made it to the pond.  I was tempted to ride out on on the ice, but remembered at the last minute that I'm supposed to be smarter than that, at my age. 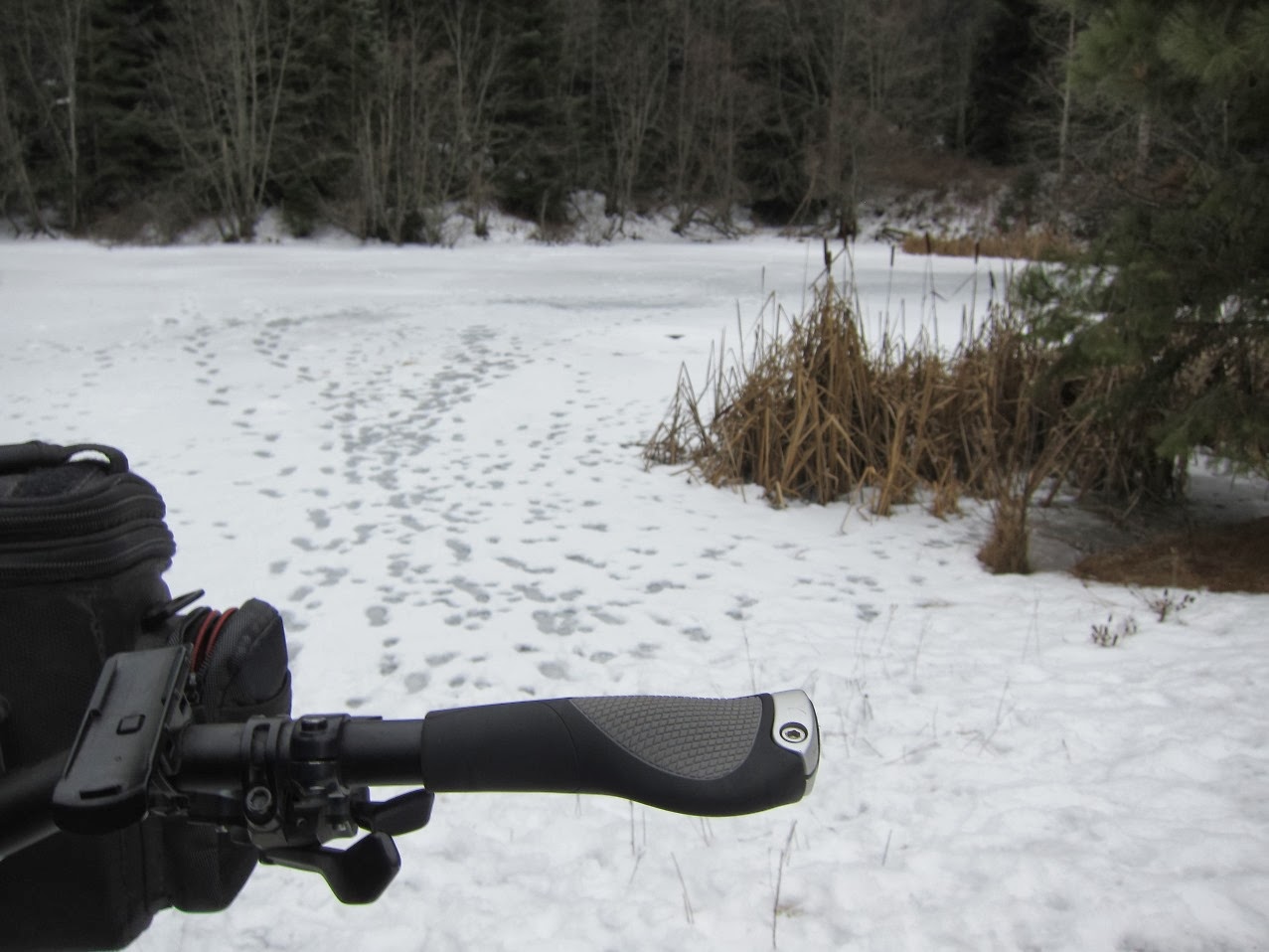 I thought that maybe at the convergence of the Middle Road with the main road, the
foot traffic would subside and the surface get more rideable.  At first, this looked to indeed be the case. 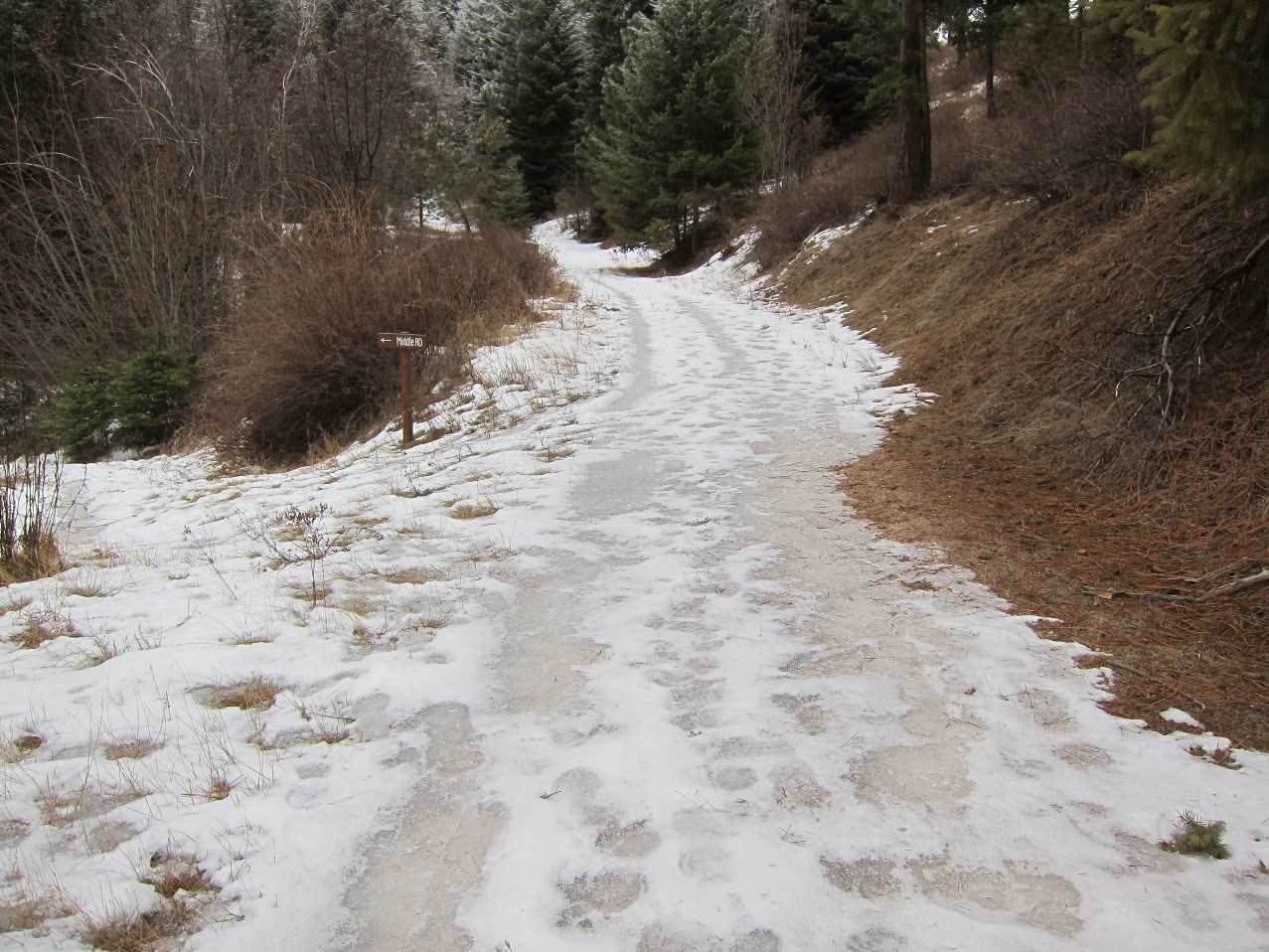 But then it turned straight to shit again.  My feet had to be on white to have any traction at all.  There was no standing on the ice.  That stuff was for dragging my bike across. 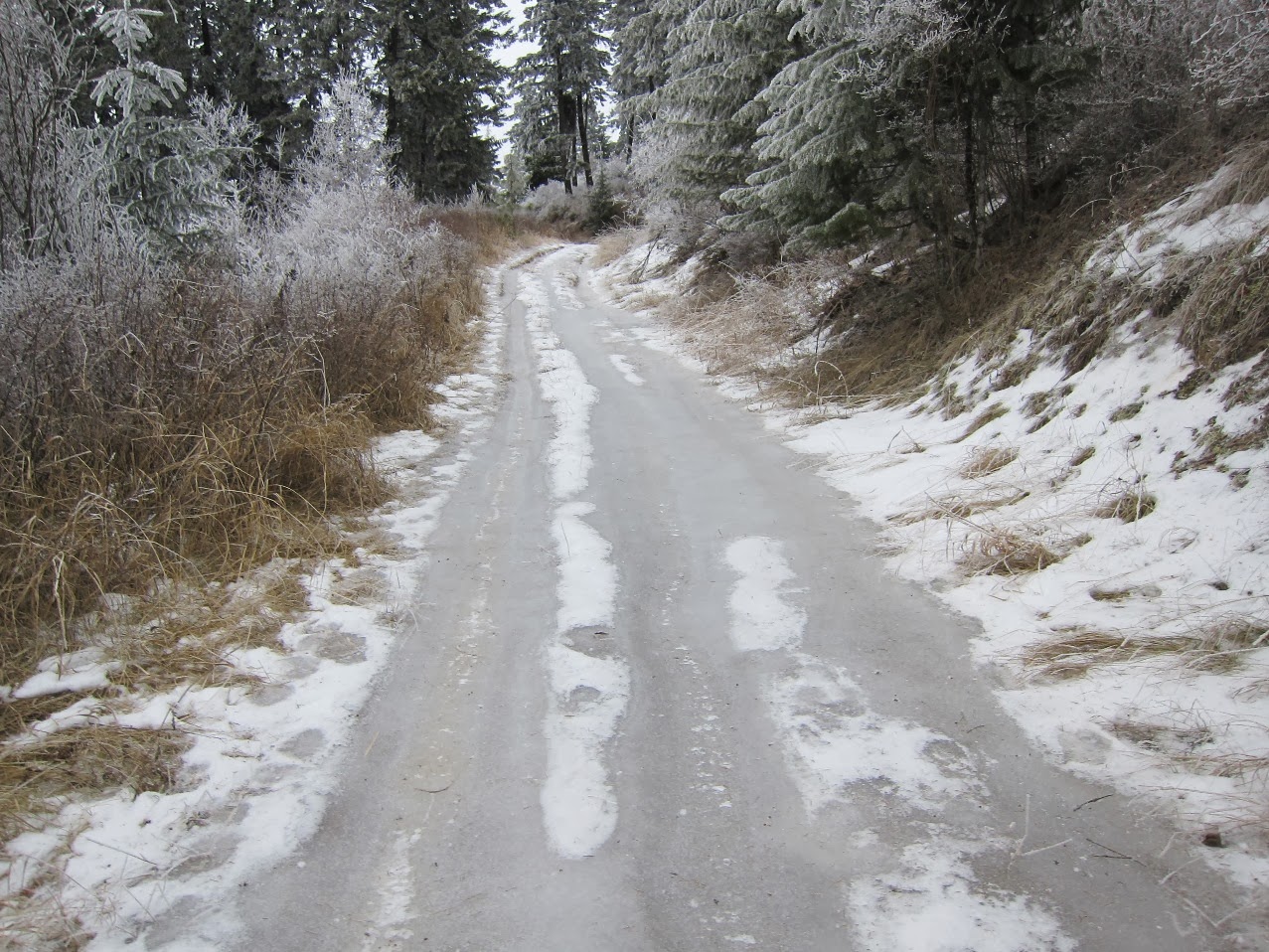 My modified goal was to make it to that first clearing that offers a view of the valley floor.  Modified mission accomplished.  2-1/2 whole miles from the parking lot and one hell of a lot of work. 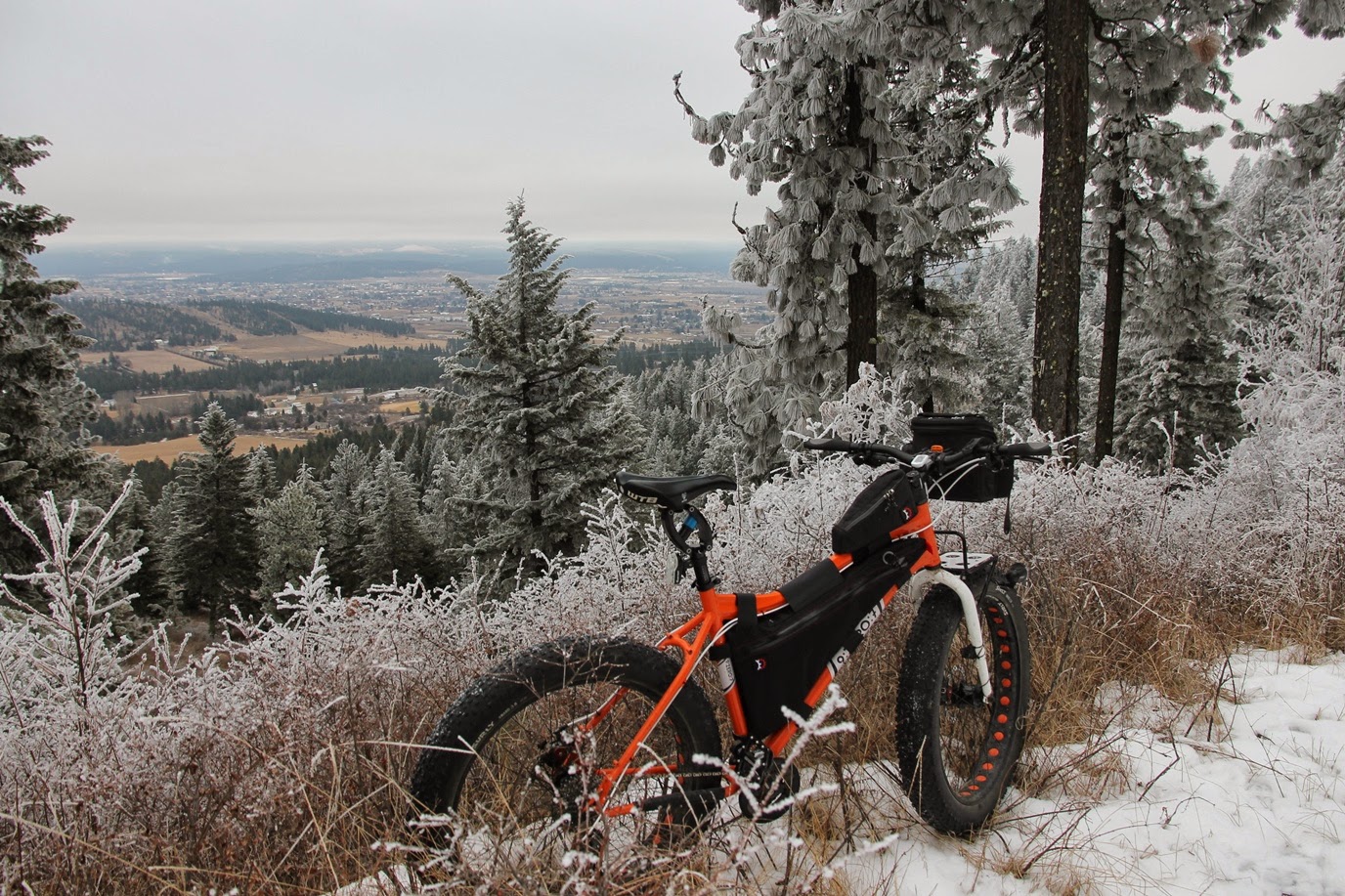 The most striking thing I noticed about Antoine today was just how dead-silent it was.  I heard a bird two different times and a chipmunk once.  And that was it.  There were lots of ungulate tracks, but none were fresh - they were all cast into the frozen concrete.  No carcasses of poor old fellas that weren't strong enough to endure the harshness of the season, and even the dung piles looked old.  It's like the area had gone to sleep for the time being.  Dog days of winter, I suppose.  This plate 'o beans was the freshest looking piece of wildlife evidence I saw all day. 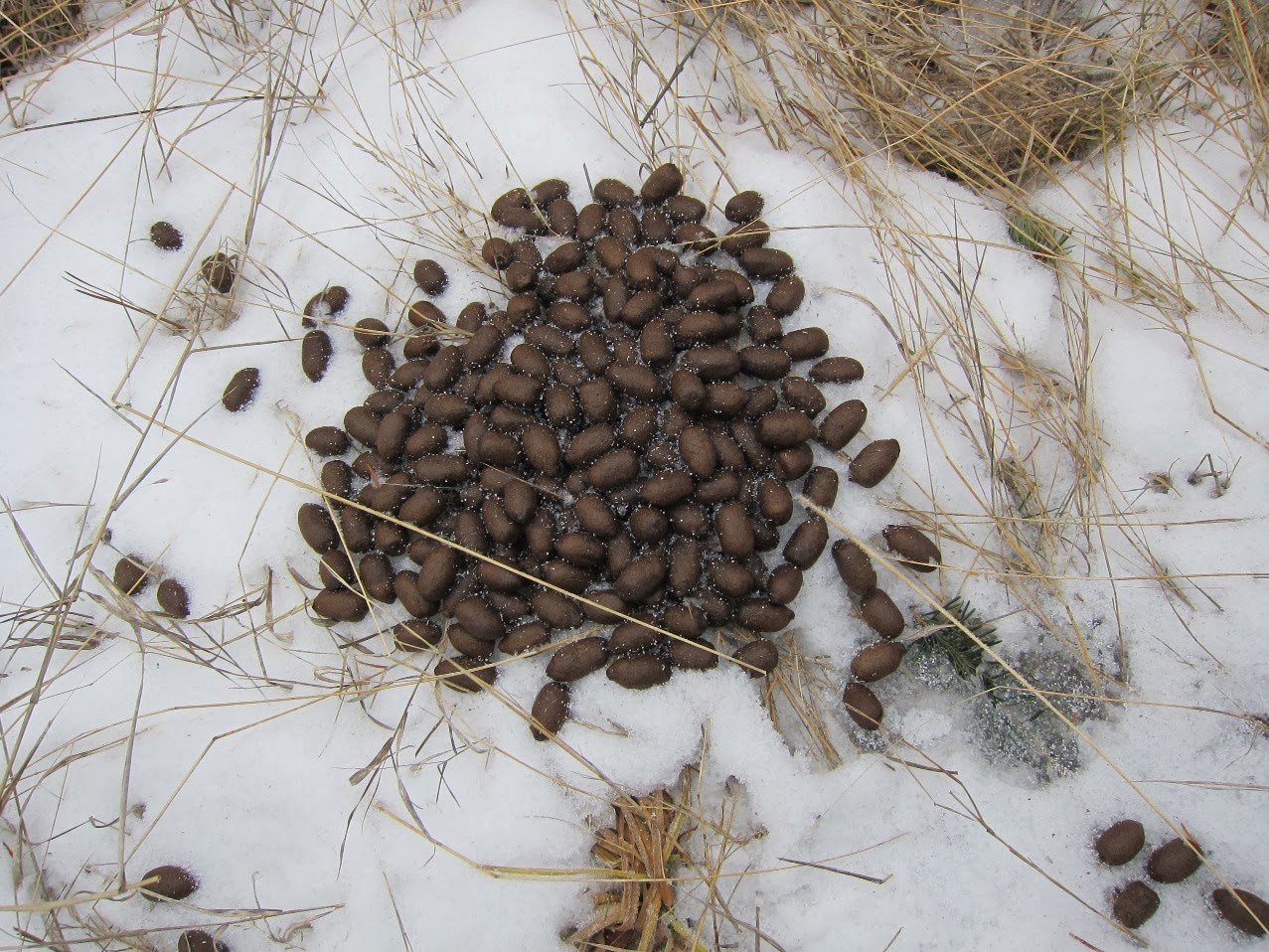 The sentinel wasn't saying much either.  And quite still did he stand. 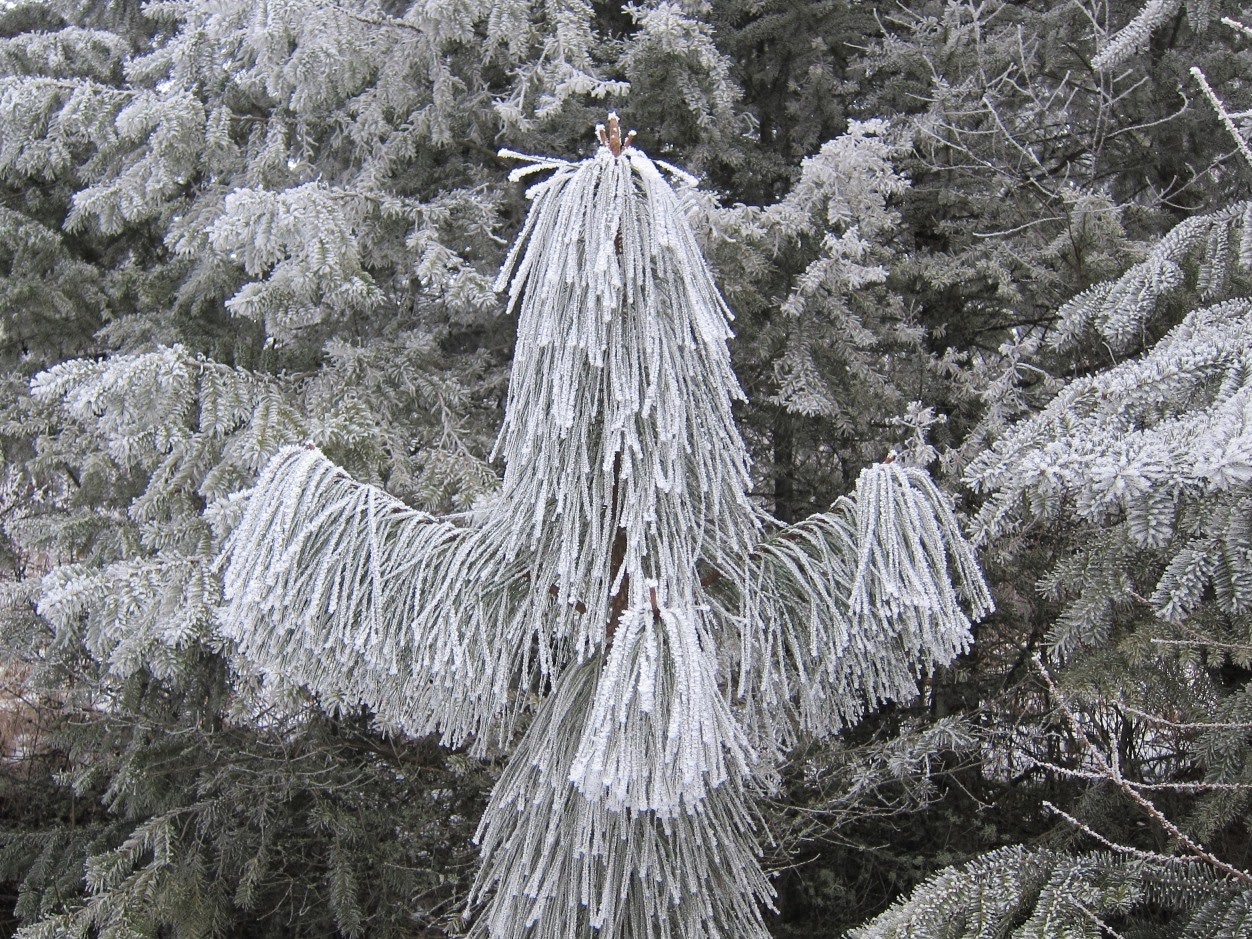 I thought the descent might be a different story, but it was just as tough.  All up, I spent maybe 20% of my time on the bike.  Here's a sampling of the crunch . . .

Though the summit attempt was a bust, it was great to get out and bang around on Antoine.  I sure dig that place as just a constantly-changing environment in which to consistently get a good outdoor workout.
Posted by Pat S at 9:45 PM

Add some Dillinger fat studded tires onto your lust list. Of course they're out of stock for a while.
- Ventura

I fell for you. Today we got a really good thaw and all the snow and ice is gone. It's going to be 19F tomorrow. Nothing a couple of layers can't solve.

good to see you're getting out and about. I had to double check - I wasn't sure if that was the same bike! I like the Revelate bag approach.

Get fat bike, worry it's overweight.

Get all your favorite spirits and wines at Duty Free Depot!

Get professional trading signals delivered to your mobile phone every day.