Maybe one of the few consolations of getting older is that you are quicker to recognize experiences that are truly once-in-a-lifetime. They generally come out of nowhere. Like tonight, for instance.

I was minding my own business, riding home from work. The weather was perfect, the ride uneventful. That is, until I jumped onto Trent or Spokane Falls Blvd or whatever they're calling it these days. You know, the U-district. I was westbound, just east of Division, by Midas Muffler. The 'Don't Walk' sign was flashing and I knew I was toast, but I stood up and hammered anyway. And whadya know, it held. I generally LOVE this next part because you're rolling downhill past the Convention Center and traffic is moving slowly and you can get in the mix and get your adrenaline rush on.

Unfortunately, tonight, I pulled up behind a big-ass class A diesel-pusher multi-hundred-thousand-dollar behemoth motorhome. There was cussing and moaning and bitching and no picture-taking going on, but it was about this size and color: 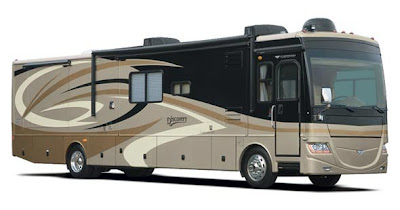 The light changed and this monstrous dude spewed a bunch of black smoke out the back. I turned my head and coughed, which I normally reserve for my doctor, and then I called him un-thinkable names, which I normally reserve for my doctor. I couldn't see the light because this mammoth blocked everything including the sun. But I decided that I was getting on his bumper - I would just stay close and let his shadow to drag me through the light, no matter what color it was.

And then it happened. I think maybe he had one of those rear-view cameras and got freaked out about some idiot on a bike tailgating him. Or maybe not. Whatever. He punched it. So I punched it. It was effortless! I suddenly realized I was drafting behind a two-story building . . . I was riding in a vacuum!!!!! Just imagine staring at a wall of fiberglass like this as it pushes all the air out of your way! 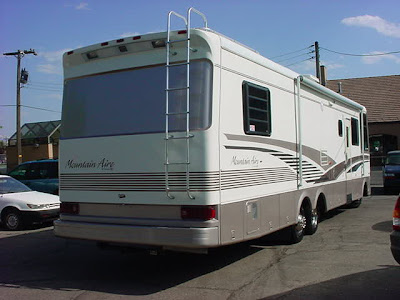 We blistered our way past Azteca and Kinko's. The Opera House was a glass-and-concrete blur. We must have been doing, uhhh . . . 75. Yeah. He tried to drop me, but I was the BICYCLE KING OF THE UNIVERSE! For two blocks. And then the light at Washington turned red and my crown turned to dust. But it was the sweetest two blocks of my life. And what made it the best was that he punched it. Good luck finding a grandpa behind the wheel that will do that.

You know that I know that I can never duplicate this experience. So if you see some dude on a bike this weekend chasing motorhomes down the Argonne on-ramp . . . it's not me.
Posted by Pat S at 11:22 PM

I ride my bike around the convention center area all the time. I HATE getting blasted with exhaust - it is the worst!

I almost want to find a little oxygen mask to make a point. When you're inside a car it is easy to forget how horribly smelly it is making the air outside. The diversity in exhaust smells never ceases to amaze me. It's like no two are all alike. But they do all smell like cancer to me...

Hmm, so that explains why I suddenly felt like I was riding through sand for two blocks. You usurped my title of BICYCLE KING OF THE UNIVERSE.

It feels good, doesn't it? What a shame you'll never duplicate it.

Um, how did you know I take the Argonne on-ramp?

Careful chasing buses on the highway. That's how I lost a tooth at 50mph. Ask me about it some time.