When Jacque moved out of her apartment in Browne's Addition, there were some recyclable bikes in the weird common basement storage general area. It was clear they'd been languishing there for a while. Actual details on who owned them and that kind of thing were a bit fuzzy. She was sensing my angst and assured me that the property manager had told her it was cool to find adoptive homes for the bikes. . . or . . . errr, something like that, whatever. Fuzzy, like I said.

It would have been totally stupid to ask a bunch of questions. I'm a tow-truck-driver-in-training, and like the real tow-truck drivers that I idolize, that small crack in the ethical landscape was all that I needed. This was my chance to step up and roll with the big dogs. . . pit bulls of men who will get in your face and back your ass down for asking why they're towing your rig. I'm big time now, and my poop don't smell. (Although like other tow-ers, it's been 3 days since my last shower, but that's another kind of smell.) 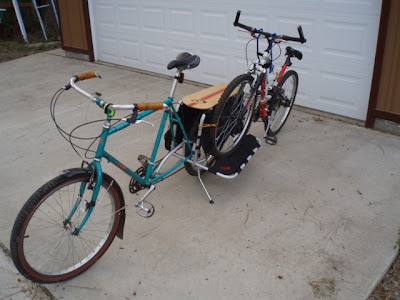 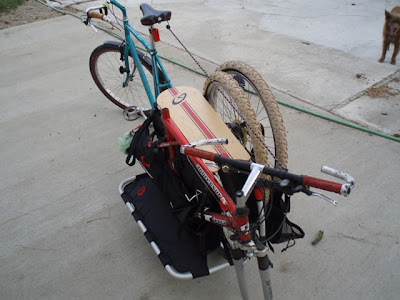 If there was any way to get diesel fumes to spew out the back of my Xtra, my dream would be complete.
Posted by Pat S at 11:25 PM

For spewin' fumes, I recommend eating three or four highly sulfurous hard-boiled eggs the morning of the big tow.

That bungee cord in the second photo looks to be stretched to its limit. Either you got lucky or you're not telling the embarrassing tale of the lash mark associated with the crack in your ethical landscape.

To where did you tow these bikes? Are you collecting them in your yard like I do?

I've wondered for a while now how to get a second bike home without having to hold it by the stem and ghost ride it. If I don't have an Xtracyle is there a better way?