(... gotta write about studs once a year, per the northern bike blogger code of ethics . . .)

I've been denying it as long as possible. But the view out the window this morning made it pretty clear that winter has arrived. Krap. I'm still burnt out from all the shovelling last year. But let's not dwell.

On the bright side and just in time, my new studded tires arrived this past week. 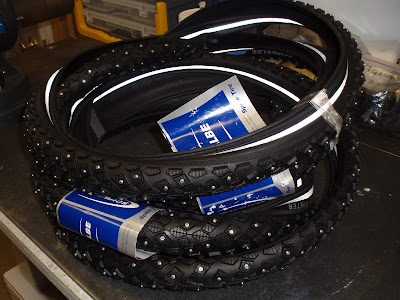 They're Schwalbe Marathon Winter 700 x 40's and I know exactly what you're thinking: "Pat, how many damn pairs of studded tires do you need?"

Here's the rundown on the studded tires I've collected since I moved back to Spokane 9 years ago and the twisted thinking that led me to buy another set. 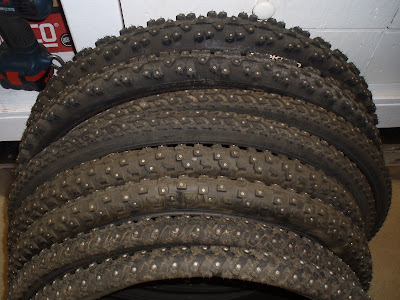 The set at the bottom is my first pair, purchased in the winter of 2000/2001. They're Nokian Mount & Ground, 26 x 1.9 (160 studs per tire), that I bought from Peter White Cycles and they're a pretty decent all-around, do-a-little-of-everthing tire. Peter White's kind of grumpy, but his studded tire page was really helpful in sorting out what to buy and I figured I owed him my business. Plus, back then, studded tires were quite a bit harder to find. I picked these up a coula years back at North Division Bicycle, 'cause I wanted something that was a little gnarlier to put on my mountain bike. They are quite a bit wider than the Mount & Grounds, so you can run a little lower pressure and float over the loose stuff more better. But that also makes them more slower. 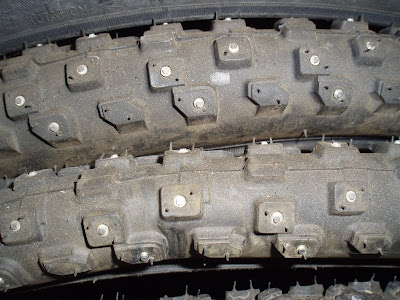 Second from the top is a set of Nokian Hakkapeliitta W106 (as in 106 studs) 700 x 35. Peter White again (I think). I got these as an all-around tire for my cyclocross bike. They're probably my go-farthest set and I've done some pretty long rides on 'em. They do well, but the drag is higher than you'd think. Not really a problem running around town, but it can really wear you down on a long ride. 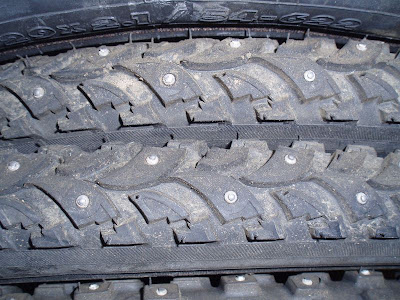 On top is a set of Nokian Extreme 294's (yep, 294 studs per tire), 29 x 2.1. These mothers are the baddest studded tire out there. I rode up a damn wall of ice last year on these things. I would swear I was lying to myself except that there were witnesses. When you drop the pressure down to 20 psi or so, you can float over really junky stuff and you have so many studs in your contact patch that the grip is just obscene. Downside is that you will work your ass off pushing these things around. They are heavy and there's lotsa drag. But if you don't mind going a little slower, they're the ultimate grippers. 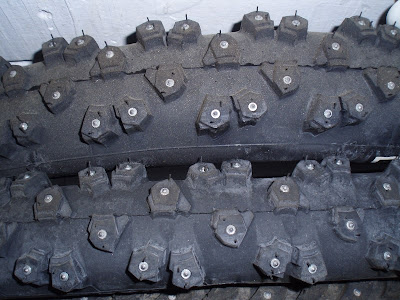 Now. About the new ones. Last winter I made it my goal to ride consistently all through the winter. Mission accomplished. But little of it was commuting. My round trip is 34 miles and the roads on the work end are pretty winter bike un-friendly. This year, my goal is to see if I can commute through the winter, even if it's just one day a week.

To do that, I gotta be able to roll good. And the pundits say it's gonna be a warmer drier winter, which to me means less of the deep stuff and more black ice. So I think the tire for the job is the Schwalbe. Purchased from Peter White, for the same reasons. There are no studs in the center, so you can pump it up and roll there with minimal stud contact, or if you need to, you can let some air out and get some studs down on the ground. I'm hoping the inverted tread pattern lets it roll with a little less drag. Plus it has reflective sidewall, which I have come to really dig. I changed tires a bazillion times last winter, which got super old, so I wanna park this tire on my bike for the season and see what I can do with it. Here it is next to the Hakkapeliitta. 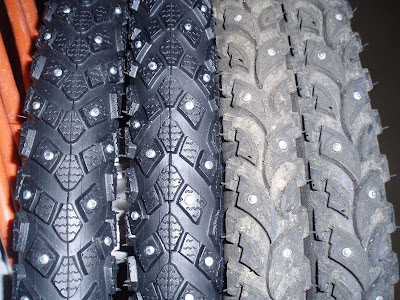 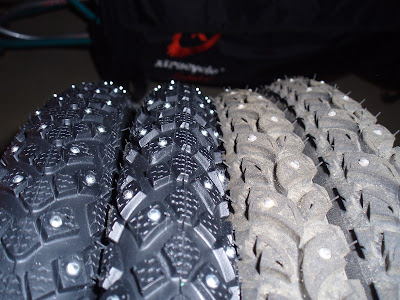 Here it is, mounted up. 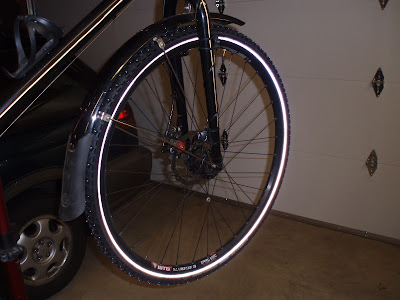 Geez, this post has gotten way longer than I intended, so I need to cut to the chase.

No one needs 5 sets of studded bike tires.

The Kendas are going on the Xtracycle.

The Nokian Extremes are for sale - $125 for the pair. They go new for between $90 and $105 each, so this is a good deal, considering they're like new. If you have a 29er and wanna do some winter mountain biking or get around town with complete confidence, this is your tire.

Winter cycling continues to grow in popularity and every year there's a new batch of folks that wanna give it a try. It's great fun and I'd like to help. Winter gear is pretty intensive and dropping big bucks on studded tires can be tough. So I'd like to offer these two set up as loaners, so people can try before they buy. I have no idea if there's even any interest, but we're gonna give it a shot. The plan is pretty loose, but something along these lines:

You give me a shout and reserve the tires. Come on by and pick 'em up or I can help you mount 'em, if you need. You try 'em out for a coupla a weeks, maybe longer if no one else is in line. The idea is to get them into the hands of as many people that wanna try them out as possible. Maybe you find out that you can't live without studs and go buy a pair of your own. Or maybe you decide it's not your thing. Either way it's a win.

You can learn more about all the these tires on Peter White's page except for the Kendas and they are here.

If you wanna buy the Extremes or try either pair of Nokians, email me at pat[dot]sprute[at]gmail[dot]com.
Posted by Pat S at 10:19 PM

That's very nice of you to do that, Pat. As primitive as it may be I have an ice biking solution for now, but at the end, if you still have the tires, I'd like to check them out.

Hey Pat, Brightspirit would like to try out biking in the winter. Can we take the 700's for a ride?

As an aside I once wrote a review for Nashbar tires. http://www.icebike.org/Equipment/nashbar700c.htm

Nice review on icebike . . . hadn't seen that before.

What a collection. I never knew you were such a stud, Pat.

Funny, I went the other way after using my winter marathons for a year I found they weren't very good in two areas, loose-snow and hard-packed/ice rutted multi-use trails. So I bought a pair of nokian extremes, used. We'll see how it works out!

The marathons worked great otherwise, no trouble on the glare-ice coated side-streets.

electric, interesting. The pendulum swings . . . check out my post from this time last year

I'm convinced that the right tire has to do with how far you need to go and what kind of winter it's gonna be. I'd like to go more far and I'm banking on icy with not much snow. Time will tell if I'm a genius or a fool.

Hope you will check back in and let me know what you think of the Extremes.

Pat, do you still have that other set of 26 inchers available for loan?
I still haven't found any used sets for sale and I can't afford to buy new ones. Even though it would only keep me on the bike for the short term, I'd love to try these out (I've never ridden in the snow before)!

Yeah, so this noob got to discover today that she simply couldn't ride in a straight line with just her non-studded knoblies.
Hoping studs will help!