John got this idea about doing a once-a-week winter bike hang. Then he implemented the thought. Or maybe it was Nate's idea, I'm not sure. Whatever. Nobody knew what to think at first, but now these hangs are low-quantity, super-high-quality events that are not to be missed. I've been out of town for the last couple and was really looking forward to this week's edition. I was not even a little disappointed.

Wade brought show-and-tell. This is the righteous trucker-biker-mudflap-blingy-shiny decal. You're looking at V2. The V1 boobs were too small and if you're gonna do something, you might as well do it right, even if it involves re-work. So says Wade. 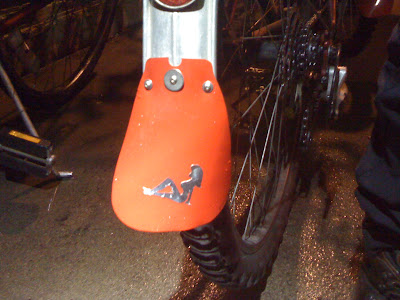 That's Glen on the left. Wade is illuminating himself from above. Stephanie and Nate are getting into position. John had already bailed. 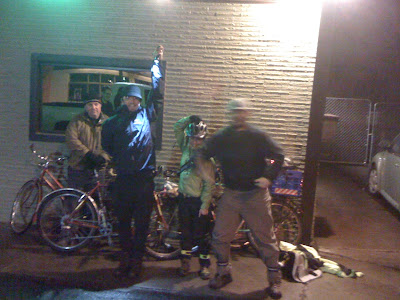 That's Glen on the left. Wade is illuminating himself from below. Stephanie and Nate are in top form. John had already bailed. 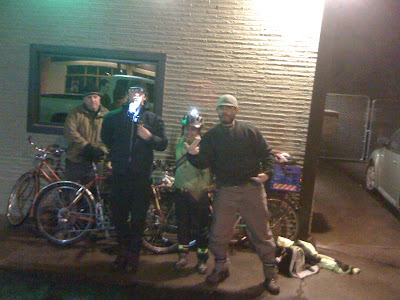 Somewhere along the way, Wade hatched a plan for a summertime Sunday morning ride that's all about getting to a ballfield and playing a game of kickball. We would have to tote beverages and BBQ. And of course, the ball. Brilliant. I'm in. If you believe that necessity is the the mother of invention, you are sorely mistaken. It's obviously beer.
Posted by Pat S at 11:26 PM

I'm glad I had to be home. I would no doubt be doing something embarassing in those pictures.

Note to future hangers: the hang spot changes according to whim. Watch my blog -- next hang (Dec 23 -- xmass eve's eve) is looking like Huckleberries.