I'm genetically predisposed to sweating like crazy. (Oh, did I mention this post was gonna be gross.) But seriously. I mean like eating ketchup makes me sweat and I am not kidding.

So imagine what a long ride on a hot day flushes out of my body. Or better yet, don't. But the point is that sweat carries gobs of salt away with it and then I am imbalanced (love that word). Don't ask me to get technical on this. I just know from experience that I've had to take fancy electrolyte tablets on long hot rides or else I will be miserable at best, toast at worst.

But I've also learned from more recent experience that I can substitute way more funner (and cheaper) salts for the fancy ones. Like those crazy corn nut chips. Which we decided on a trip last year were made by sweeping up the dust from the floor of the corn nut factory and comprocessing (?) them into little circles. Which is sort of confirmed by the fact that the official corn nut site (which is very fun, btw) doesn't even mention them. Hey, they are cheap and they worked for me.

But I'm pretty sure I've found something better (albeit more expensive) this off-season: 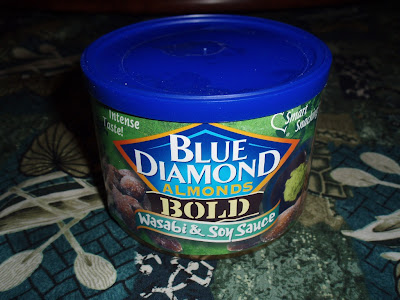 I love wasabe and I've only had what I think might be the real thing one time in my life and it was so good it was spiritual. And then there is a host of krap out there that uses the word to sell their shit, and this krap is just pathetic. But then in the middle is some stuff that is decent, and this is one of them. I could possibly eat about seven cans in one sitting, if I let myself go. Yes, that good. I'll for sure be carrying a few (nuts, not cans) on rides this upcoming hot season.
Posted by Pat S at 12:21 AM

I like them very much, too. I don't want to alarm you, but they are available in large bags instead of the small cans. Walgreens.