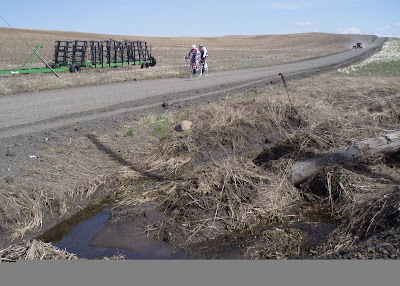 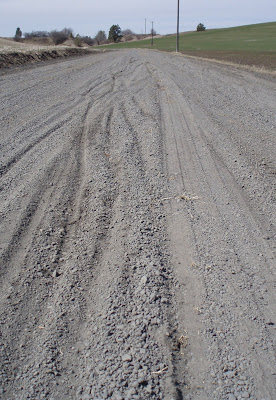 I don't think the gravel is the worst of it, I think it's the rollers and wind. And then again you can't really separate the two. But I can't say for sure, I'm a spectator. It's just what I hear, what I parrot. Everyone who's been through this particular spin cycle says it's the worst they've ever felt and the best they've ever felt.  WTF ever that means.  Crazy buncha bastards.

Only thing I know for damn sure is how great Team Two Wheeler was for manning up all the volunteer spots - flaggers, marshals, drivers, . . . you name it. I can't begin to say enough good things about their positive, can-do attitude. And I know for damn sure, based on firsthand experience with several of 'em.

Double shoutout, though, to Bill Radobenko, for helping with sign setup. It's a huge job and it was just so rad to have help and company.

Not sure about the future of this event . . . it probably can't continue with just the 65-70 racers that came out last year and this. Maybe it's worth another year or two to see if it can grow and draw to a point that makes sense.  The experience is already legend.  I just hope it's not something we look back on way too soon.
Posted by Pat S at 12:31 AM

You got it right Pat. That was the toughest course I've ever raced. The gravel was my bane.

Kudos to all the volunteers that made this happen. The experience was one I'll not forget.

It was a super fun race to host. Yeah, 67 riders was a little disappointing. We'll talk more about next year after we collect our thoughts. And we couldn't have done it without you on the team Pat, thanks.

Thanks, Mike. Agree on it being a fun race to host.

Eric, I saw you on the road several times - you were riding strong, and by the look on your face, riding through the pain!

I don't know if this is The Official Stance, but I'm all for having this race again. It doesn't matter what size race you have, it'll be a lot of work. Why I want Ronde van Palouse to continue is because of the numerous racers who came up to me after the race, thanking me and the volunteers for having the guts to put on such a challenging race.

Anyone can get big attendance for a race that's flat or just 25 miles. Ronde is so far off the scale in difficulty, it's in its own league. When a rider finishes it, they swear (to paraphrase) it was the best of times and it was the worst of times.

Now that's something different that the area doesn't have.