I've been way ready for the Manito Tap House to open pretty much ever since I first heard it was gonna be the Manito Tap House. Thanks to a tip from Spokane Southie, Patty and I learned that the soft opening was happening Friday night, and since we were on a neighborhood bike date anyway, we swung by. 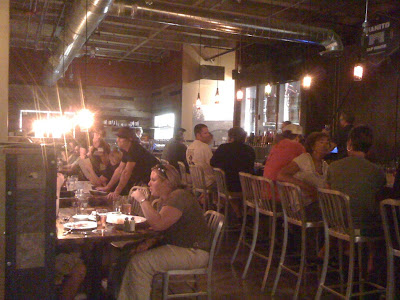 Turned out there was nothing soft about it, as the place was packed. It was kinda late and we weren't into waiting for a table, so we left, vowing to return. Soon. We got our chance this afternoon.

If you don't know much about the place, you can check out another of Spokane Southie's posts here.

The atmosphere is great, and the number of beers on tap is over the top.

Patrick, the owner, spent some time talking with us - he obviously digs the bike crowd. He has plans to install a custom, arsty bike rack. He's gonna keep a pump and basic tools behind the bar, for patrons to use. And keep some tubes on hand for sale. And oh yeah, he mentioned a 10% discount for cyclists through the Bicycle Benefits sticker program. Saweet! (Now, where did I put my sticker?) This is such a rad, rad, RAD addition to the neighborhood.
Posted by Pat S at 5:08 PM

Glen, ya, wondering the same thing. We can't bail on Jones completely though, they've been good to us and they're rad. And central. Nothing would make me happier than to bail completely on Benni's however.

Benni's is superb. For example, I really hope that picture of the growler is not considered "full" at Manito Tap House. Cause that's a pint's worth of foam there.

All the same. Looks rad. But until I go check it out, I'm withholding granting it two "rads" + all caps "rad."

Plus. Man. I really miss the PTI. That was such a great shit hole for breakfast.

John; grasshopper; you are a demonstrated and pronounced seeker of truth. But in order to progress spiritually, you must now let go. Pear Tree is dust. Ashes. The arisen Phoenix is mighty, tho.

Admittedly, the growler-filling process was awkward at best, a little hard to watch. They'll dial it in, though. C'mon, opening weekend, give em a break.

As for Benni's, you must realize that the "what was" has been supplanted by the "what is". Finally. Krap service is so yesterday. Great neighborhoods, fortunately, evolve.

I know that my words are just words. So I urge you to just go there, and step foot inside the MTH, if you can find space to set your foot that is, as it's fairly happenin' already. I am confident that you will immediately understand my rad count and possibly bump it by a rad, if not by a cap RAD.

Taking it a step further, when you start to realize that you can stop off at the MTH and get a buzz going on one of over 50 great beers on tap and then head upstairs to shop for affordable yet fashionable clothes, well hell. This is totally the new cool.

The Good Doctor and I tried to go the same time you did. Can't wait to go back when we can shoehorn our way in.

Ben there twice now, mid afternoon was the key to get in. Most underwhelmed by the menu. Expected upscale pub food, not $5.00 yam chips. I like the walkable location and the beer selection plus all day Sunday happy hour.

I say get dinner but then buy the beer at the Hop Shop. At least you get a full 16 oz for $4 instead of a small glass of beer for $6. Plus the atmosphere is much cozier! And the service is a lot more personal when drinking beer.

And when it comes to pub food I think the Two Seven still has Manito Tap House beat. But overall, it is great to see more business on the hill!

Somebody posted $6 for small glass of beer? For real? If so my first visit will be my last.

I'll withhold final judgement on the joint until that first visit, however I typically find SH establishments to be, well, SH establishments, which are too upscale and overpriced for anywhere in Spokane. That photo of the food. Is that an appetizer? Do high prices and miserly servings make a place better? The SH attitude seems to be to charge more and say it's good for you then expect people to flock to the place. Micky D's should take note. Just raise the price on their burgers and say they're organic and the Big M on 29th will have more business than it can handle.

Waiting for the novelty of the place to fade first

I'd like to suggest Ace Hardware for the next bike hang. No beer, but goddam, finally a hardware store where you need it! Maybe they'd less us fondle tools and shit.