Coupla weeks ago, Patty revealed that she's not too much about drop bars anymore. That totally registered and made sense to me and also gave me, in my mind, full permission to craigslist-out her Trek road bike that we bought 5 or 6 years ago. I got one response, which is pretty much all it takes, and the bike was gone. I'm not exactly sure that she saw things happening quite that fast. But damnit, I knew what was best for her, so I took charge.

She graciously rolled with that, as well as my bike shopping agenda over this last weekend. What woman doesn't like to shop, I rationalized? Well . . . my wife apparently, when I'm along.

What she ended up being smitten with was a Trek flat-bar road bike at Two Wheel Transit. But not the exact model or color that she was after. Tomas, being the superior salesmen that he is, happened to mention, and actually write down on the spec sheet that he printed out for the model she *was* after, that they had one (2012, no less) that had just arrived, in "Seafoam!" (that's the only and EXACT word that was added to the printout, in beautiful, rad penmanship, complete with exclamation mark.) Apparently, it's a particular style of salesmanship and color of green that spoke directly to Patty. I was clearly toast.

I'm not exeedingly bright, but at least smart enough to know when to zip my pie hole, which is exactly what I did. They put it together and she picked it up yesterday.

She is super-excited about her new bike and I am even more super-excited for her. There are some transcendently dramatic, thrilling moments in life that involve nuptials and new babies and that kind of thing, but after you get through all the heavy hitters, getting a new bike is still in the top ten, I think, unless you've had either ten babies or ten new wives, of course. (If you've had both, you're in a class by yourself, and a new bike probably won't register in even the top 50, so don't get your shorts all bunched, you're not my target audience.)

One thing, from a bike-nerdy husband's perspective that is great about dealing with TWT, is that you KNOW the bike is put together right and that the fit is good. Thanks Tom (I assume) and Tomas, Patty is thrilled.

And headed out on her first commute on her brand new bike. Good times. 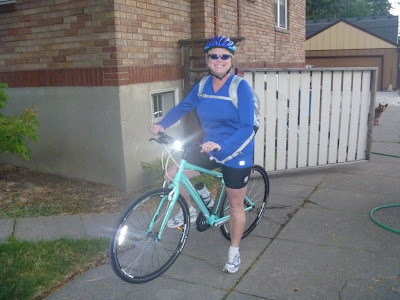 Shiny! Makes me seafoam at the mouth in jealousy!

If you need your ex-girlfriend or ex-boyfriend to come crawling back to you on their knees (no matter why you broke up) you must watch this video
right away...