Patty and I bike-dated down to the new Flamin' Joes on 29th tonight. Only the best for my gal. 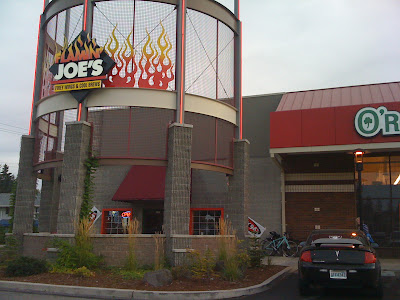 There's no bike rack, so we had to chain up to a downspout (lame). I want to think there are plans for a bike rack, time permitting. So I'm not issuing a demerit just yet. 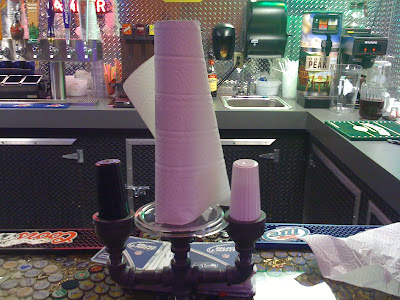 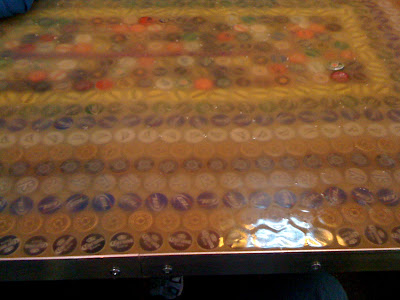 There are about a million wing flavors, including the original set . . . 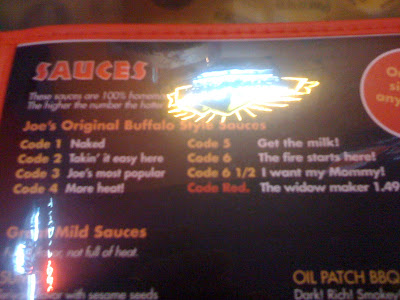 There's a code red challenge (not sure why bogger dumped this picture on its side, but whatever, blogger) . . . 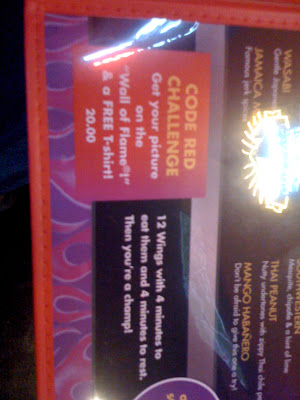 This is what our actual order looked like. It was BAD. In the good way. 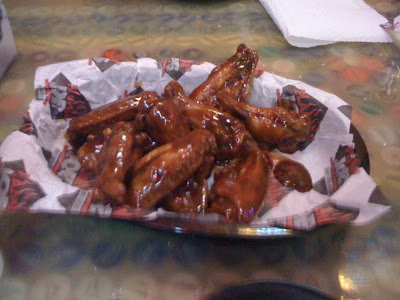 Beer-wise, this is the tap list.  Not super-inspiring, your regular sports bar deal . . . 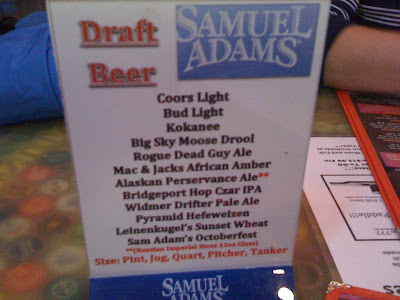 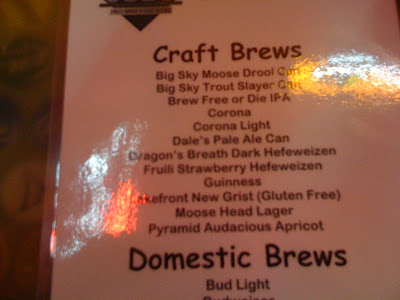 But here's something a little different . . . big bottles are apparently the big deal here, and the list is long (again, not sure why blogger dumped this picture on its head) . . . 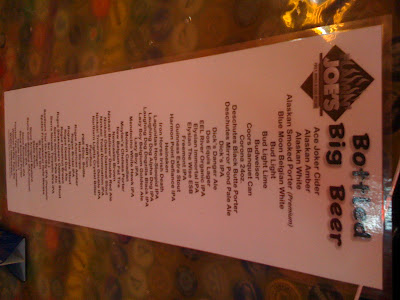 Here's what a big bottle looks like in the hands of a patron . . . 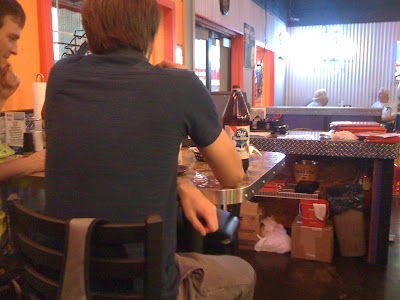 So there's a party-time, gee-wiz factor to the place for sure, and I'm good with that, if not all hyped.  But what has me pretty damn excited is the view through my bike hang spectacles.  This picture doesn't really do it justice, but the place has a ton of room and can accommodate some pretty badass crowds. I don't know if you remember the Chapala layout, but there were all these sort of individual, compartmentalized dining rooms on the main floor and then a whole 'nother balcony level.  With the remodel, the main floor has been completely opened up and there looks to be massive seating on the balcony level too (we didn't actually go up and check it out). 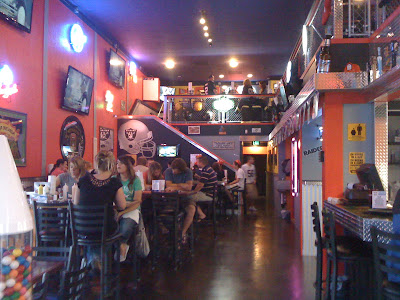 IMHO, our biggest bike hang problem over the last coupla years has been crashing in with a big group and overwhelming the establishment.  Think South Perry Pizza debacle.  The south hill neighborhoods are conducive to and filled with more boutique-ish establishments.  Until now, there hasn't been that place that has the general capacity to not be phased by a 20-ish large group rolling in. Until now.

All that's necessary for a good hang is a reasonable beer list, some honest bar food, space enough for everyone who shows up, and good enough service to make us feel appreciated for dropping our hard-earned dollars.  After that, we're good on our own.  Based on initial impressions, I'm thinking Flamin Joes might deliver. So yeah, I'm excited.
Posted by Pat S at 9:49 PM

That's some mighty fine recon work there Pat. I think Flamin Joes is a great idea. In fact, I think wings are always a great idea.

You had me until the comic sans font appeared. On a beer menu, no less. What were they thinking? Nothing says "craft brews" like a childish, over-used font. Shame, shame, shame!

I checked out Norther Lights wings today for lunch. Good stuff. Huge "wings." In fact, I'm not sure those were actually wings. Hopefully they were chicken. Good beer. (Specifically, a special cyrstal that is finished in Dry Fly whiskey barrels - carmel'y)Huge place. Central.Good wings.

It'll do for future hangs too.

Alan, I specifically remember some kit discussions involving "kerning" perhaps. Foreignest thing to me ever. I totally love your passion for printing/graphics. But maybe you could give these guys the slightest bit of leeway. I think you might appreciate the destination a time or two this winter.

John, NL is just head-slappingly obvious - can't believe we haven't landed there already. Thanks for the hard core due diligence.