Squeezing In A Ride

Patty and I road-tripped to Seattle for the weekend. The occasion was a party: Jacque and roomate Brita were born on the same day of the same year. How flippin cool is that? And this year marks their 30th. They were gonna keep things low key. How flippin lame is that? Luckily, they came to their senses and decided to throw a speakeasy-themed cocktail party birthday bash. These two dames know what they're doing when it comes to house parties and it was a gas. 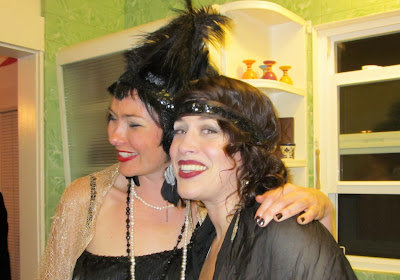 I suspect you'd have no trouble looking at a bunch more pics of pretty girls in roaring 20's outfits, but this is a bike blog damnit, so snap out of it.

It was a relatively quick trip over and back for us, with quite a full menu once we got there. Squeezing in a ride didn't seem likely, but riding in Seattle is always fun and I'd identified maybe, possibly, a window of opportunity. So I packed my newly cable-splitterized contraption in the trunk, just in case.

Sure enough, the window materialized, and I found myself in the darkness of the hotel parking garage, assembling my bike for a ride. 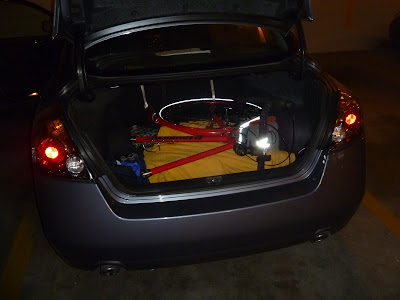 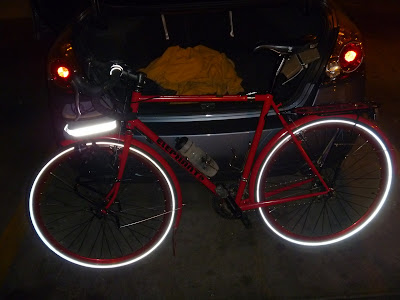 It took me 7 minutes to put the bike together. It should take about 2. But I really haven't put the coupled halves of the bike together that many times yet and let me tell you, they're pretty damn squirrelly, what with parts flopping all the hell over everywhere while you're trying to screw two separate joints together at once, with just two hands. Not sure if the garage had security cameras but if it did, I'm pretty sure I made the guard's whole shift. At any rate, me and the bike were finally ready.

My potential next-year cross-state tour on the John Wayne Pioneer Trail occupies my mind for a significant portion of every day now, and as a result, no trip to the west side is not gonna involve some sort of recon. In this instance, we were staying in the U-district, which is hella close to the very last few miles of the route - on the Burke Gilman trail out to Ballard. One of the things I hadn't figured out was where I was gonna do the ceremonial dip of the tires into the Sound.  It's now figured out - Golden Gardens beach. 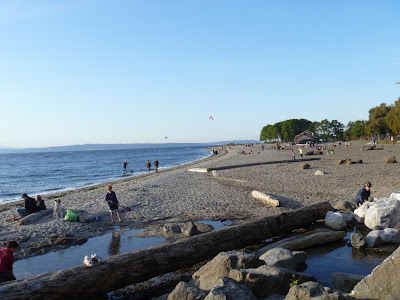 It was a wonderful mid-October afternoon in Seattle and I immensely enjoyed the adventure of sneaking in a ride where one should never have fit and piecing this little bit of the trip together.  The subtle point (or maybe not) is that if I'd have had to haul a bike over on a roof or hitch rack, it would have been way too much of a hassle, given what we were doing and where we were staying and parking and security issues and all that.  Even more than that, the bike would have gotten way in the way of what the weekend was all about.  But with this coupled gizmo in the trunk, I was able to work in a ride and keep it real.

I know. You could give a shit about my stupid-ass ride and next year's trip. Fine. Be that way. Here's some more eye candy, then.

Pat, how the f' have ya been? Glad to see your riding you bike.