Crossing Washington On The JWPT - Day 1

Day 1 was the first bona fide day of touring and the plan was to ride about 50 miles, from about mile 15 on the map below to about mile 65. The only access to any kind of services (i.e. food, water) would be in Rosalia, which was about 10 miles in.  The big event for the day would be passing by Rock Lake, which is the long, skinny body of water sitting under the 50 mile marker on the map.

For the appetizer, we ordered up more classic Palouse farm country. I knew however, that we would be trying something different for the main course. 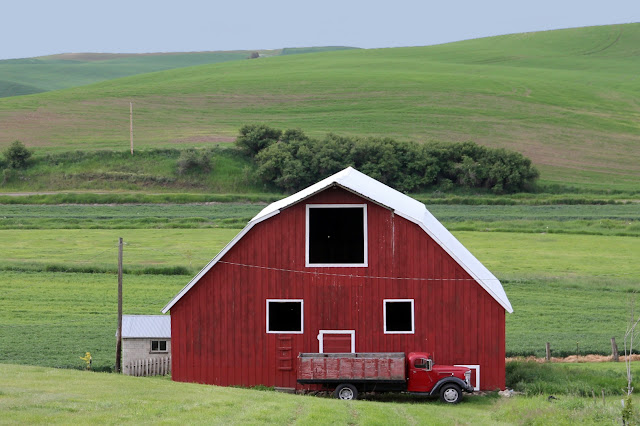 One of the brazillion deer we saw.


One of the brazillion rock cuts we pedalled through. They never got old though. 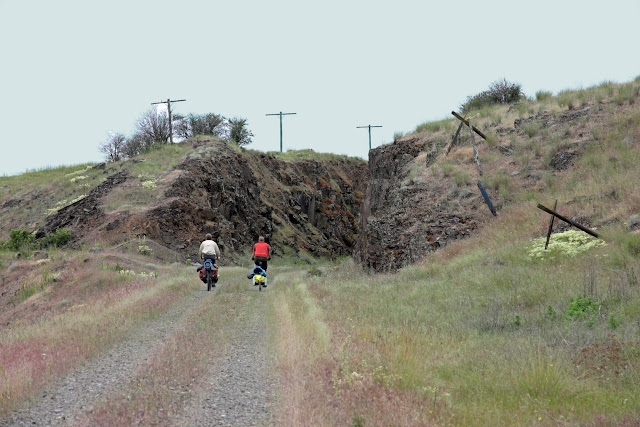 As we were just about to cross the rad trestles leading into Rosalia, Eric noticed that the filling had squished out of Scott's sleeping burrito. See the blue rolled-up pad and the sleeping bag inside it on Eric's bike? That's exactly the way Scott's was supposed to look, but all you can see is the pad. 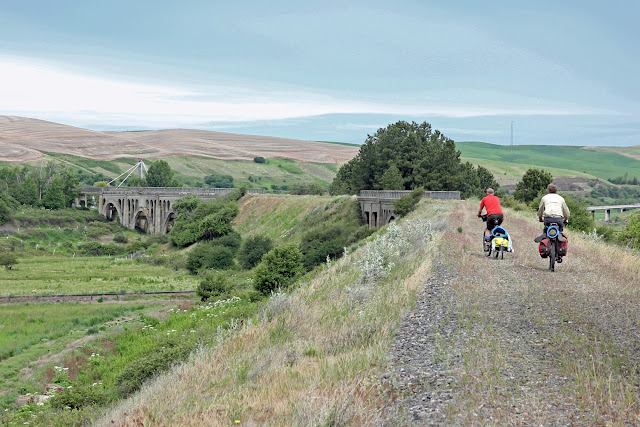 Scott promptly dropped his trailer and set about the business of backtracking. A sleeping bag would be a tough item to replace in these parts, and an even tougher item to live without. Finding it was mighty important. 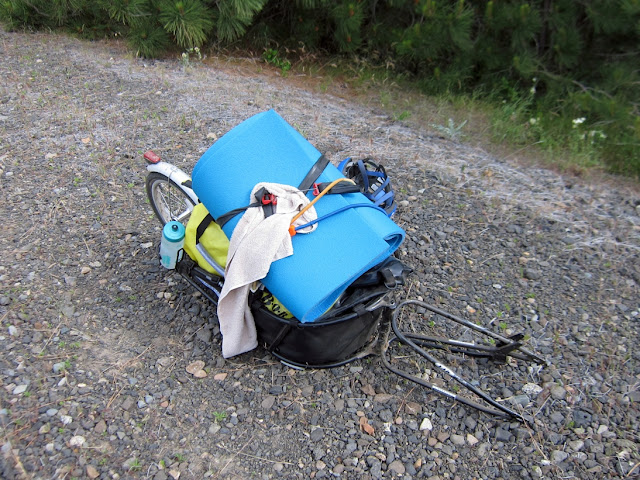 Meanwhile, Eric and I rode into Rosalia in search of breakfast. There were two choices: A coffee shop and The Fairlane. The coffee shop looked nice, if you were after coffee and pastries, but we needed something a bit more solid, hearty. The Fairlane looked like maybe the kind of place that could deliver. It's a real different place though.

The proprietor (who we didn't at that moment know was the proprietor) was out front smoking and there wasn't a soul inside. We struck up a light conversation, about the availability of coffee and some breakfast food, and of course about what the hell we were doing in Rosalia and where we were coming from and where we hoped to end up. And "man, those are some crazy tires. Never seen anything like 'em". If I had a quarter for every time someone said something about my tires on this trip, I could buy a motor home and be done with all this cycling nonsense.

The proprietor, as well as he establishment itself, are one-of-a-kind. He's a biker (the Orange County Chopper kind) and the place is totally multi-purpose - everything from cafe in the morning to bar and grill in the afternoon/evening. With a dance floor. And areas with big-screen TV's and sofa's. And parking space for his kickass custom chopper, which he told us he built himself. Everything there happens on Fairlane time and in the Fairlane way. Bottom line though, is that we got exactly what we were after. 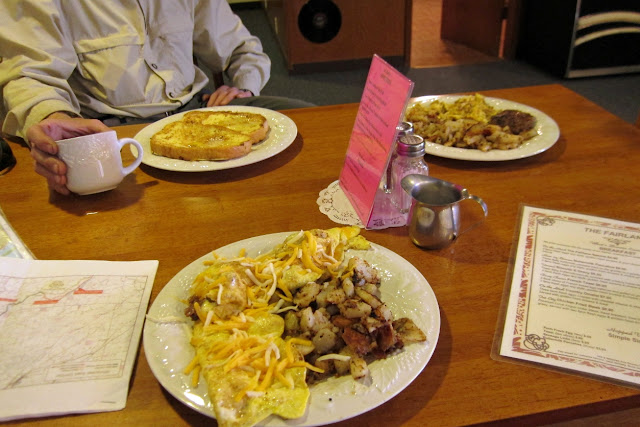 While we were eating, a group of 10 or 12 bikers rolled up and the place started to coming to life and the beer started flowing. At 10:30 am. Righteous. More questions about what we were doing and why, and "hey man, check out those tires!" In general, once everyone kind of got their heads around what we were doing, they were full of support and encouragement. Or maybe that was just the beer talking. Whatever it was, it was good. 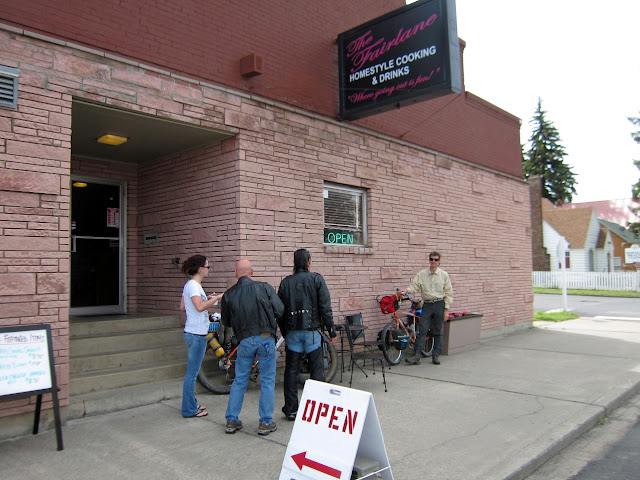 Meanwhile, after more than a few miles, Scott had tracked down his bag . . . it was right where he'd left it.

Just outside of Rosalia, we bagged our first tunnel. It was kind of rinky-dink, a culvert affair, but definitely a tunnel, for damn sure. And therefore worthy of a mild celebration.

Next stop on the westbound Milwaukee Road would be the town of Warden Malden (Sorry, Warden happens in a coupla days!). Houses and a post office and that's it. But we didn't even see them because the rail line was on the other side of a majorly big berm that separated it from town. What was interesting about Warden Malden though, was that it must have been quite a significant hub in railroad days. There were multiple concrete foundations next to the trail that would have supported water tanks for filling steam trains and probably coal hoppers and who knows what all else. And obvious sidings. There was also a cool old weathered building that looked liked it was probably a bunkhouse for crew or maybe even a station. Or both. 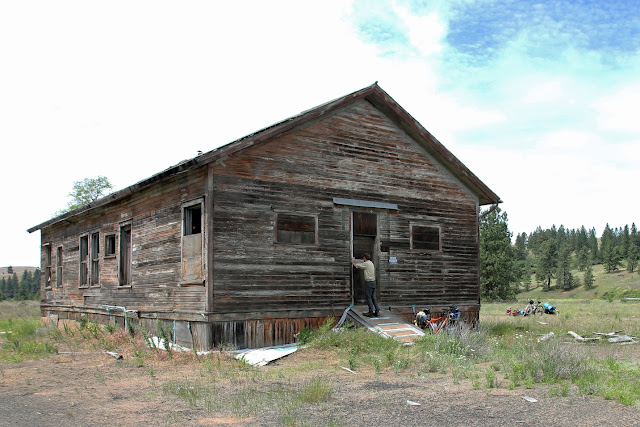 No water though, and we were getting pretty parched. Next stop was Pine City. Not even a post office there, just houses. We looked for someone, anyone, out in their yard whom we could ask if we could fill our bottles from their hose. Nobody around. But Pine City also has a grain elevator and the grain elevator has a spigot. We knocked on the door but nobody was home. We hoped it would be okay and then we just let it rip. Did I mention we were really thirsty on death's doorstep? 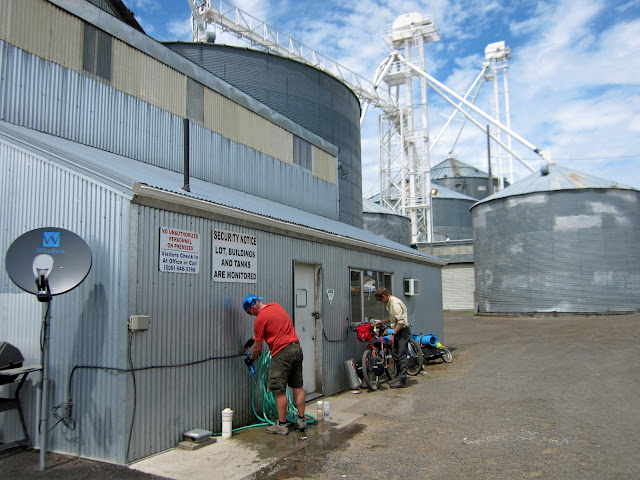 The portion of the trail approaching and passing through the Rock Lake area is hands down the most spectacular portion of the eastern section, scenery-wise. IMHO. I'll just shut up and let you enjoy the next few pictures. 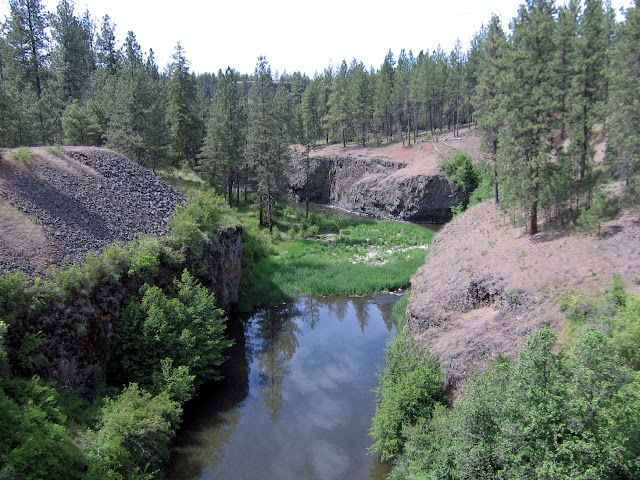 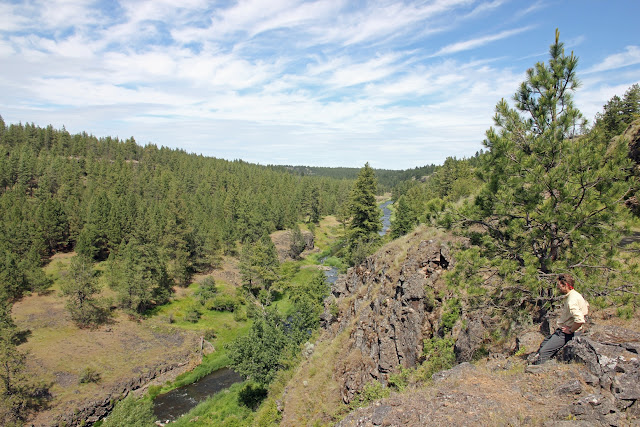 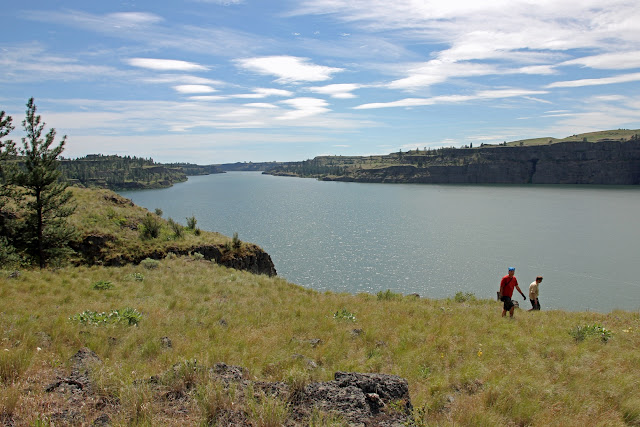 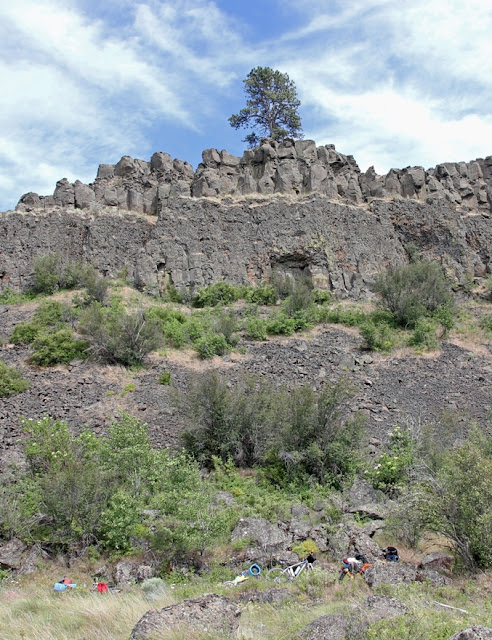 Rock lake is an obvious product of the Missoula Floods, with its sheer basalt walls. The railroad is carved right into the side of one of those and as a result, there are a number of awesome tunnels and trestles. Not the wimpy kind, but the super real deal. 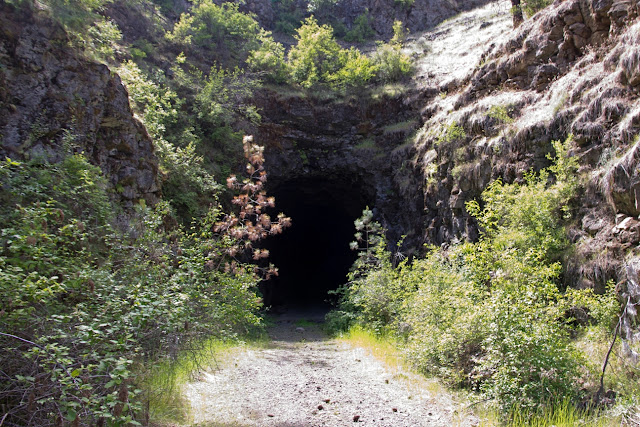 At the outlet of the second tunnel is a rockfall that is hardcore hike-a-bike, no two ways about it. Dump everything off your bike and carry it across and then come back for your bike kind of stuff. So rad. 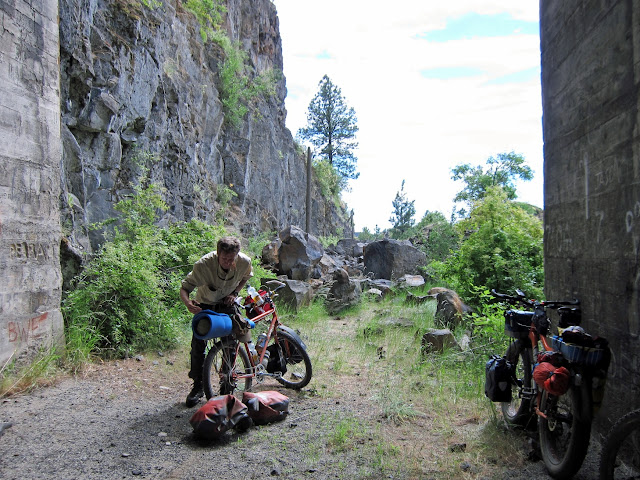 Scott and Eric, admiring the view from WAY above the lake. Just over the cable guardrail is a tremendous drop . . . I don't know, 100 ft, 200 ft, whatever. Awe inspiring. The trestle itself is unimproved and pretty much just they way they left it. Part of why the eastern portion of the trail, despite its harshness, is so awesome . . . it's totally authentic. 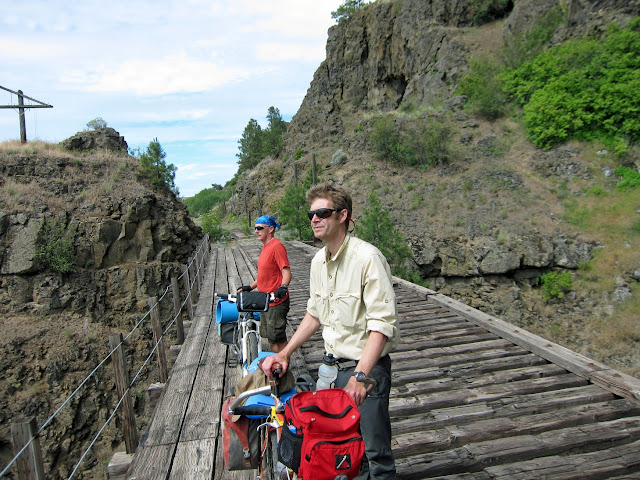 What a cool old signal tower. But rusty and decrepit and a little scary, structurally. What kind of fool would climb up that rickety old ladder just to take a picture. 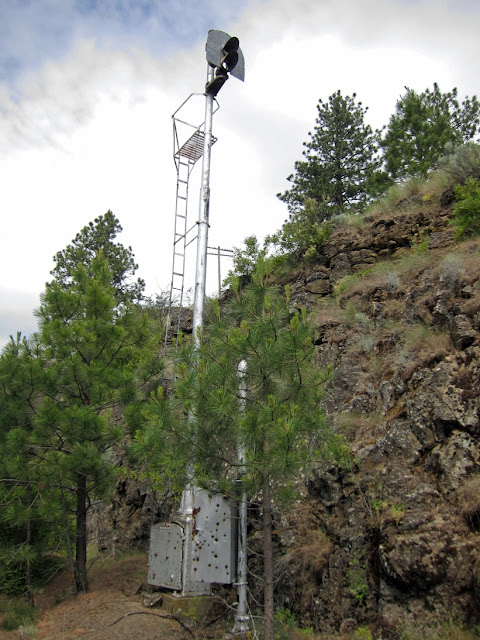 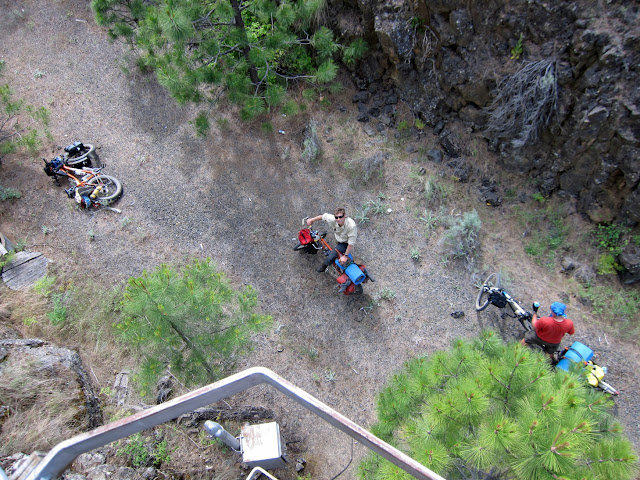 The landscape had definitely changed over the course of the day. 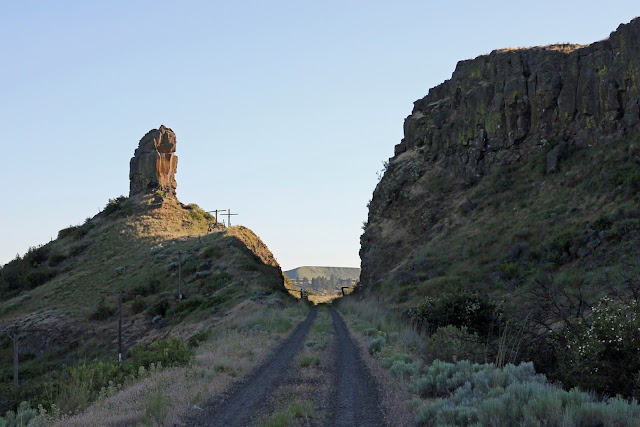 Or in terms of my previous lame analogy, "Beef. It's what's for dinner." 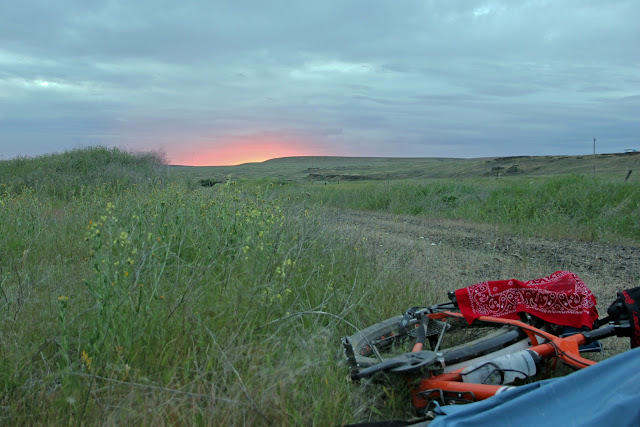 It was a good day - we got our mileage in and it went pretty much according to plan. Little did we know, this would be our last "normal" day.

Really great stuff and amazing photography. You do not disappoint. However, I am wary of the foreshadow of impending doom in the final paragraph.

BTW, it was Bike to Work Day here in Denver, and I rode my Pugsley among the throngs. If you figure out a way to cash in on fat tire comments, let me know. I, too, would be much wealthier if I profited every time I heard a variation of, "Man, those are some big ass tires."

Pat, this is really great but the anticipation is killing me. I need more info fast! Thanks for these great postings, I check 2-3 X per day for the next one. Steve.

I'm enjoying reading about your trip. I love the Rock Lake area.

This appears to be a trip of a lifetime. I am so jealous it hurts.

Great posts! I just worry about what you said there at the end, though. At least by telling the story we know that you didn't die?

Can you get all the way past Rock Lake now? I had heard that some rancher closed it off & forced a 15-or-so mile retour around the entire lake.

There is a rancher that owns approximately 2 miles of the trail in the middle of the Rock Lake section. The state managers have advised me that the section is closed to public use. In a candid moment, they have also said no one will probably know if that section is used. Coming from the Pine City direction, I haven't seen any signs.

Too bad you didn't get off the Trail in Malden and notice the beverage machine at the Town Hall/Library/Community Center Bldg.

If you'd been there during Library hours when the bldg is open, you could have scored a shower too.

Malden is kind to Trail Riders.

Really love this entire story -it has been and remains an inspiration to me. During the months of the year that I am stuck on a boat in Alaska basically working 24/7, I often refer to these pages as a sort of mental vacation. So I finally got to put together a very short exploratory trip from the Olympic Peninsula over the mountains to check a few things out. my riding buddy can't get much time off, but we managed a long weekend with my camper and our bikes. We made it to the Pass the first night after work, and woke up the next morning and just rode the tunnel - VERY cool! Then we drove to Plummer ID, spent the night, and did an out and back ride on the beautiful paved Trail of the Coeur d'Alenes (which looks like it could have been part of the Milwaulkee Road as well?). Then, the next day we drove to Pine City and did an out and back on the Rock Lake section, even stopping to climb the signal tower (that sucker is scary!). I really want to do a straight through ride on this trail! On the way home we stopped at the Cle Elum depot and got an excellent history lesson on the place, as well as the railroad.

Interestingly, the Olympic Discovery Trail follows much of the corridor on the Peninsula that was also run by the Milwaukee Railroad as a spur - using barges to Port Townsend. Growing up in PT, I remember the sound of the trains still running along that track - today I ride my bike along it quite a bit.

On a side note, the section of the Corridor East of the Columbia was almost recently shut down forever Read here.

Anyways, my permits are in place from both DNR and the State Parks for the next year, so I hope to visit the Eastern section more extensively, eventually leading to a longer through-ride. Thanks again for the inspiration, great story, and pics!

Guess I can't edit the above comment. Looks like the CDA Trail was NOT part of the Milwaukee Road. Also, I see you are well aware of the threat to the Eastern JWPT, and are doing something about it - thanks!