Crossing Washington On The JWPT - Day 3

Day 2 had been pretty demoralizing and we all agreed to just sleep on things and figure out our next step in the morning. The wind blew all night and into the morning of Day 3. On top of that, it looked like rain was coming our way. Scott had done what he'd come to do and was headed north on Highway 261 for the 10 or so miles into Ritzville, where he'd rendezvous with his wife for the lift home. He's a really good guy and it had been great riding with him and we took a minute to snap a parting-of-the-ways timer shot. 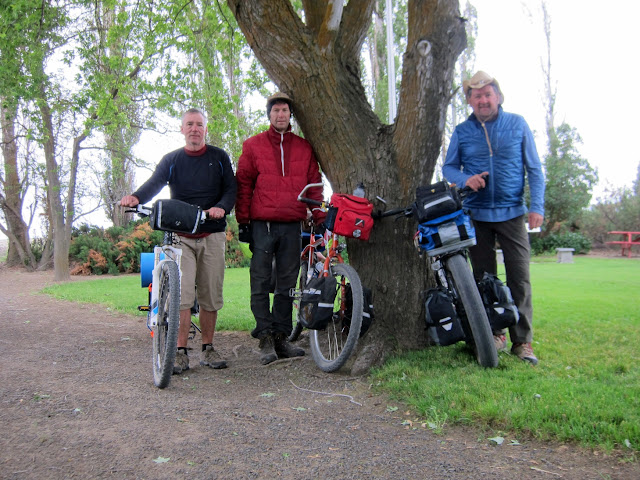 For me, this was the lowest point of the trip, enthusiasm-wise. I could have so easily decided to screw this shit. I had a week of vacation ahead of me and why did I want to waste it out here in the middle of nowhere, eating crap food and getting rained on and pounded by the wind? I could be sleeping in at home and chilling and living the good life. Bon bons and bubble baths. If I had been alone . . . I might have thrown in the towel. Or not. I'm not sure.  Luckily, the weather didn't phase Eric all that much and deep down I wasn't ready to quit and was up for the challenge of another day. Touring partners are good to have, in so many ways. After a bit of cursory discussion, it was settled and we were on our way.

We started at somewhere around mile 85 on the map below and would have to get to mile 180 to catch back up. We weren't really thinking about it that way, though. We were just ready to adapt to our situation and do the best we could. As it turned out, we would get as far as Othello, at about mile 140. But I'm getting ahead of myself.

Almost immediately after hitting the trail, things felt better. The wind began to die down and yeah, it was raining, but it was okay. 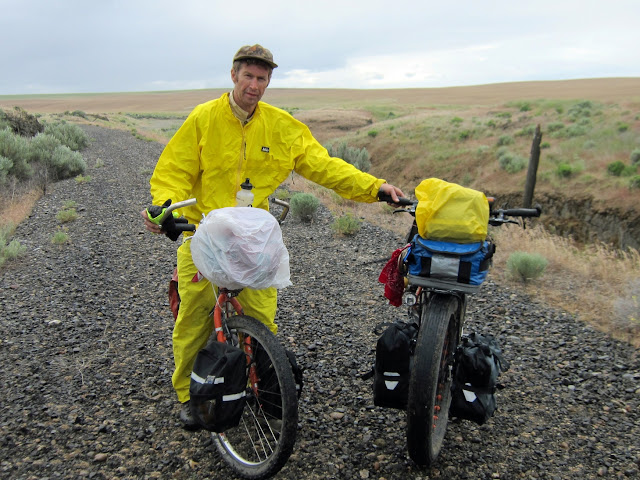 It would be 16 miles between Ralston and Lind, and it would be probably the roughest section of trail on the whole trip, dictating an average for the section of just under 7 mph. But we just found our pace and got into savoring and appreciating the experience of riding through some of the mostly gnarly and desolate terrain that we would experience on the trip. Crazy as it sounds.

Additionally, I was still kind of mourning the fact that the burger and beer that we were hoping for at the end of Day 2 didn't happen, and was thinking that maybe the consolation prize was a hearty, greasy breakfast waiting for us at the same bar and grill. So there was that.

I don't know why, maybe a dream I had, but I was pretty sure that the JWPT trail tunneled under Hwy 395. Turns out though, it trestled over it. 'Xcept that the trestle was gone. The detour is the out-of-focus path on the far right of the picture below and one just like it up the other side of the highway, to connect back with the trail. 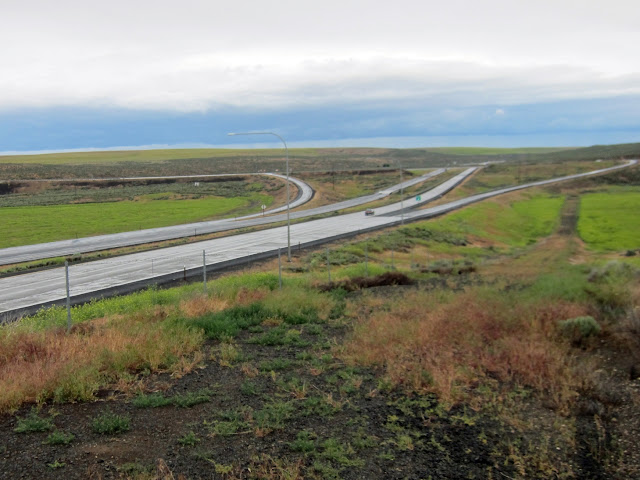 At the bottom, and connecting the two paths, are these tunnels. So maybe there was something to the dream after all. 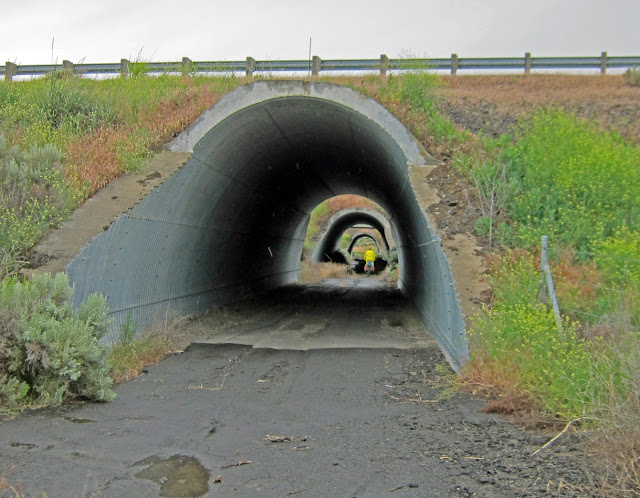 About 2-1/2 hours after we'd left Ralston, we finally arrived at Lind. Upon quick survey, the bar and grill didn't open until 4:00 that afternoon. No other cafes or anything. Damnit to hell. Oh well.

It was time to once again modify my expectations. Inside Jim's, they had just finished pre-heating some pizza pockets and those weird BBQ burritos you normally find only at gas stations and were loading them into the hot storage case with the glass doors.  Freshest they would ever be, so apparently the force was with us. 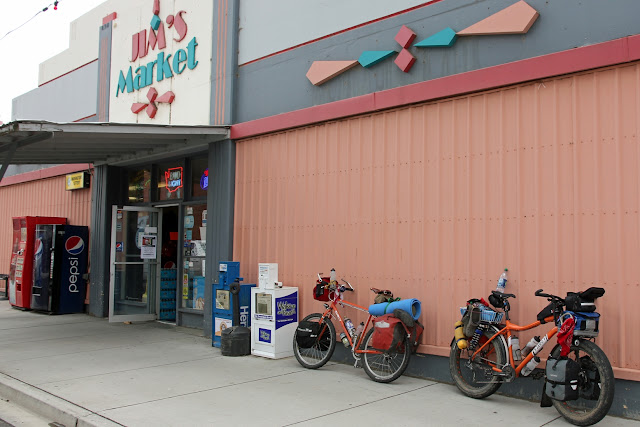 Just outside of Lind, we encountered the amazing remains of what must have been a spectacular trestle. And another convergence of dead and live rail lines out here in the middle of nothing. So wonderful. 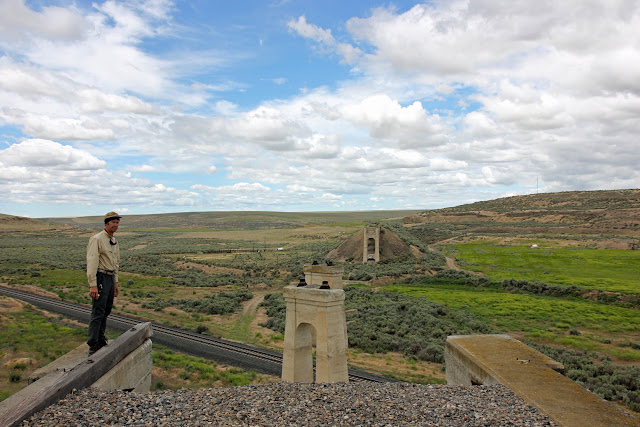 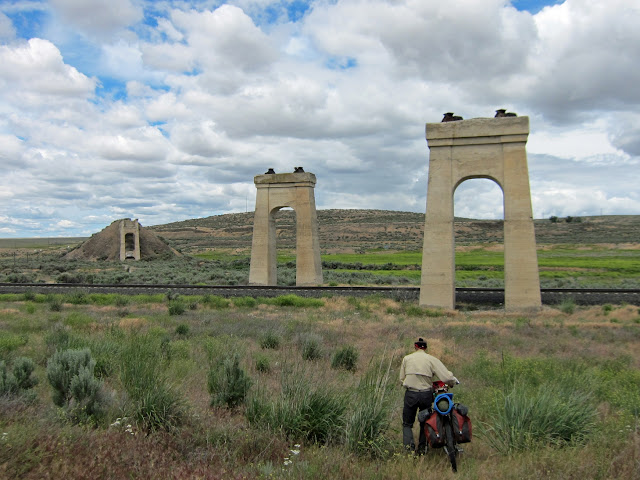 As we were detouring across the valley, another train came through, going the other direction. We were right there trackside, allowed to experience the massive rumble. 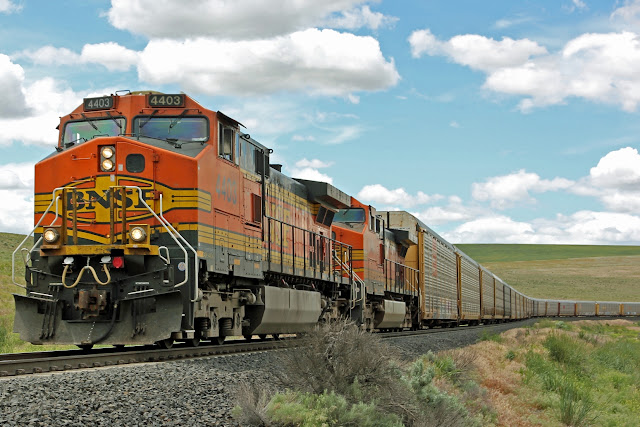 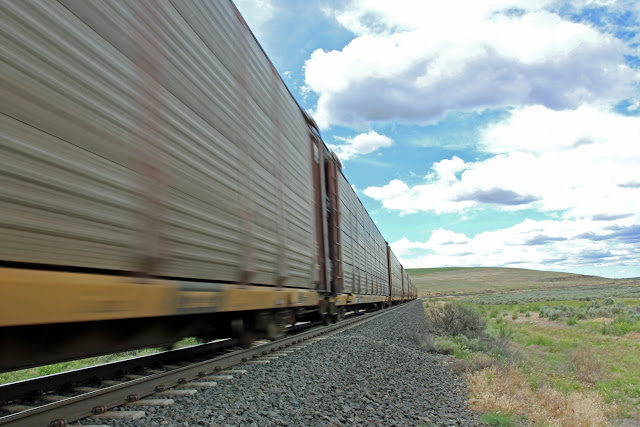 The trail was not all that friendly, but it's part of what added to the incredible character of the day. 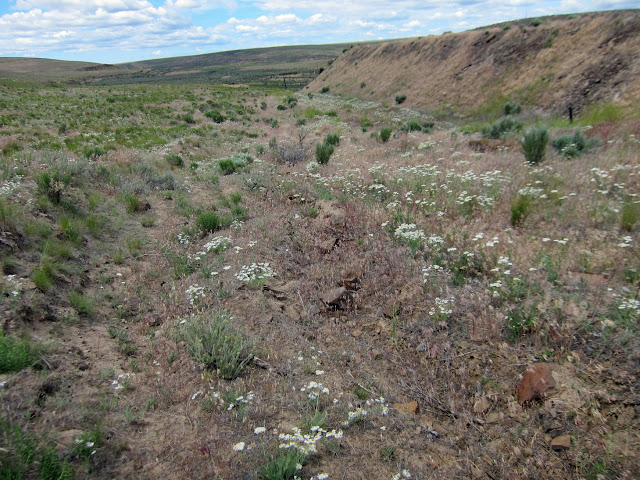 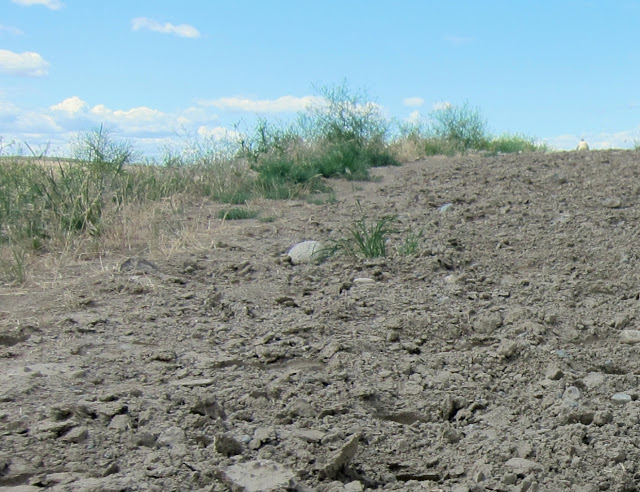 The ranchers and farmers and others who make their homes out here, I suppose, get used to the sky because they see it every day. I'm sure they rely on what the sky tells them, but they probably become somewhat complacent to the beauty, how could they not. Those of us that live in more populous areas think we see it, but we don't much, really. I became so aware of the sky and it felt to me like such a privilege to be able to spend three or four straight days looking at it against the natural horizon, in all its moods. 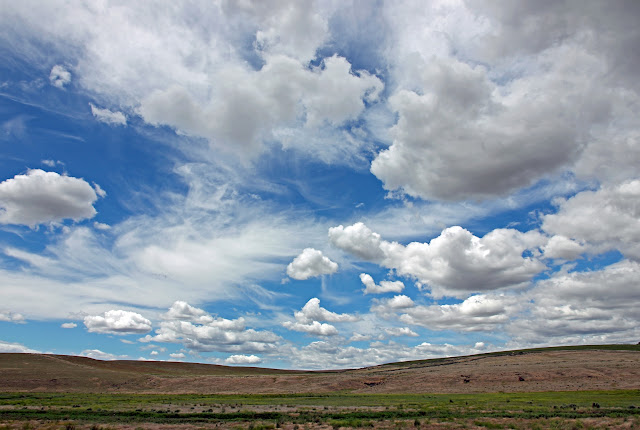 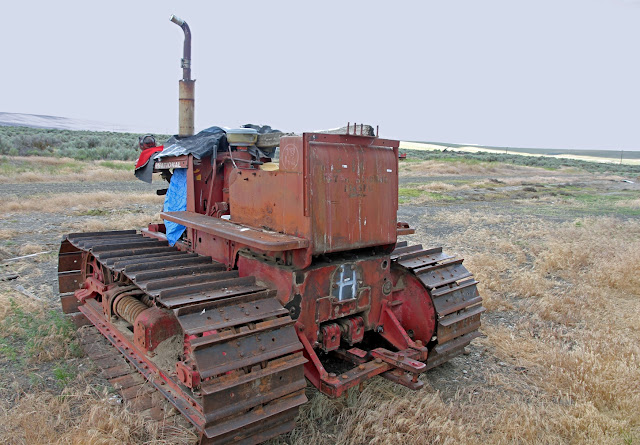 Eric and I had just a couple of non-negotiable guiding principles on this trip and one of them was to avoid traps at all cost. Otherwise, we'd have gone right in. 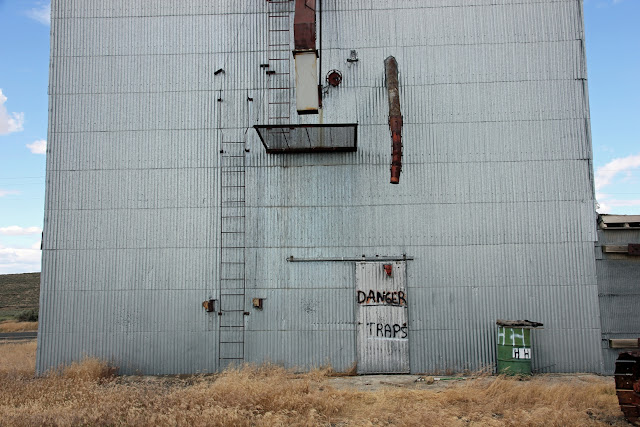 We finally reached Warden late in the afternoon, legitimately hungry and thirsty, and bee-lined right for the Mexican restaurant . . . it was a genuine mom and pop shop. It could have been closed, given the lack of patrons and visible activity of any kind. But they were there and as we parked our bikes, they came out to greet us. As we were escorted inside and seated, pop retreated to the kitchen and our waiter, the 14-or-so-year-old son took over the hospitality duties. He was extremely attentive to our needs and in addition to his normal tasks, it was clear that he was charged with relaying questions from the kitchen and returning with answers. Since he spoke the best English. Where had we come from? Where were we headed? Where did we live? And most importantly, How much did one of my tires cost? The meal was fabulous and the experience even better. 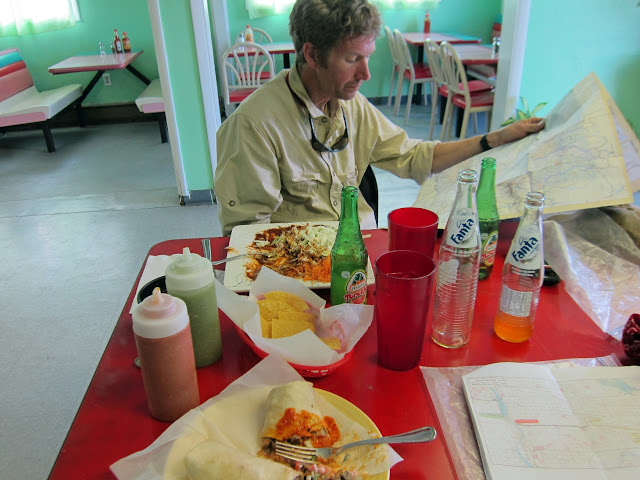 We rolled from Warden to Othello via the detour I had recon'd along the irrigation canals. The wind was getting fairly strong again and we were pretty beat and so we just kind of got through it, what a shame. The master plan called for us hitting this section early in the day, when we had the energy and enthusiasm to fully enjoy the views. It was still very cool, don't get me wrong. 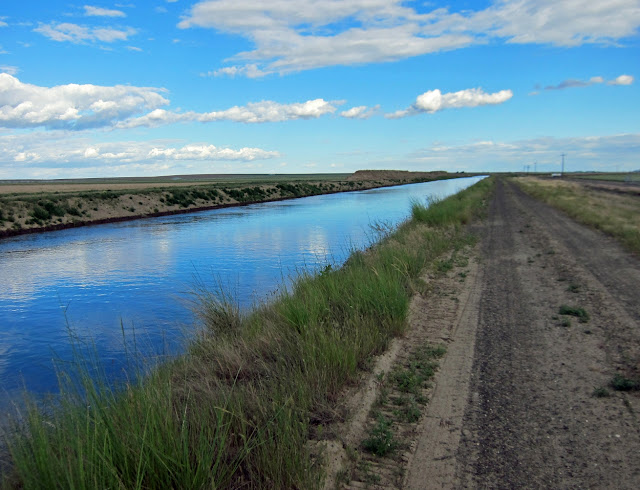 At this point, we were supposed to be through Othello and almost 40 miles down the trail, just shy of the Columbia river crossing at Beverly. But here we were in Othello and the wind was blowing hard and it was getting late and it was clear we were at the end of our travel limits, for this day. We talked about splitting a cheap motel room for the night, but the thought of piling in to a walled box after having spent the last three nights outdoors just didn't hold that much appeal. Eric suggested that we try to find a church lawn to sleep on, but all the churches we looked at didn't have much in the way of lawns. We finally stumbled across this school and happened to catch a very cool administrator, just leaving work at about 6:30 or 7:00 pm, who gave us permission to crash on school grounds.

We hadn't yet thought much about Day 4. We would deal with that in the morning.  For now, it was just so awesome to have soft, level ground upon which to retire. 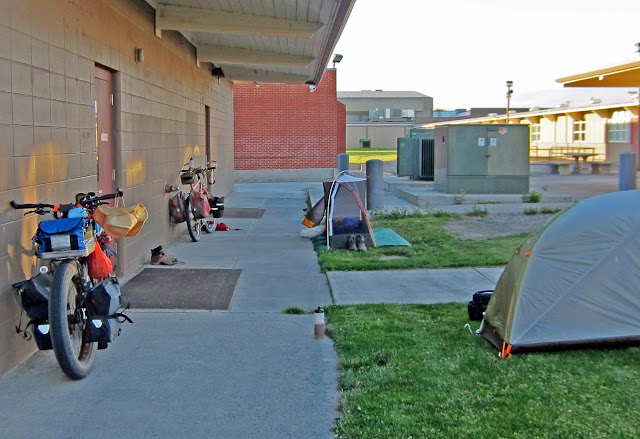 Next morning, the custodial staff showed up at about 5:30 am to find us sleeping on the lawn. Their response was an offer to open up the school for us so that we could use the bathrooms and take showers and fill our bottles. I told them we didn't need towels, but they wouldn't take no for an answer.   You hear about this stuff all the time from people who tour, but it's quite another thing to experience it firsthand. It instantly restores your faith in humanity.

At the outset of the trip, I'd been pretty sure that I knew how each day would go. At this juncture, it was pretty evident that I didn't know jack and in fact had very little control. What a wonderful feeling!

ah, the suspense has been killing me. It was great riding with you and Eric and sharing part of the journey. One of these days I'm going to check out the Cow Creek area again, it's still bugging me just where those roads go. Also, ride from Lind to Othello/Beverly, using your posts as a guide.

One of the hazards of the trip I didn't foresee, is bike fever. I don't need any more bikes, but thanks to Eric I've looking at the Surly Troll and Ogre and thanks to you I'm looking at fat bikes.

The term epic, at least when it comes to rides, is often overused. Not in this case.

While not necessarily on a bike, in my life I have experienced a few events of similar stature. In each case plans unraveled, leading to frustration and/or desperation. Though uncomfortable while happening, the process of fighting against failure exposes the raw essence of living.

Coupled with your day two post, I can sense you achieved that lofty state. Trial and sacrifice are tools to remind those of us who live in a predictable, prepackaged world of the value of risk and living in the moment. Overcoming adversity makes success (and Fanta) that much more sweet. Truly, the journey is the destination.

Alan, spot on. The food was awesome, but the shower . . . ahhhh! 3+ days' accumulation of sunscreen, sweat and grime swirling down the drain was a damn fine thing.

Scott, I wanna ride the Cow Creek section, too. Let's keep in touch on that.

Andy, yes. You said it better than I ever could. Exactly.

If you need your ex-girlfriend or ex-boyfriend to come crawling back to you on their knees (no matter why you broke up) you need to watch this video
right away...