I'd indicated earlier that I intended to screw around and experiment with the slimed tubes that went through flatstravaganza and I did dink with them for a while to see if I could get them to seal up, but life is short and there is much competition for too little precious time and I got done looking at them. They had signed up to be tissue donors though, so I extracted some flesh before I heartlessly dumped them into a mess of a mass in the curbside container. 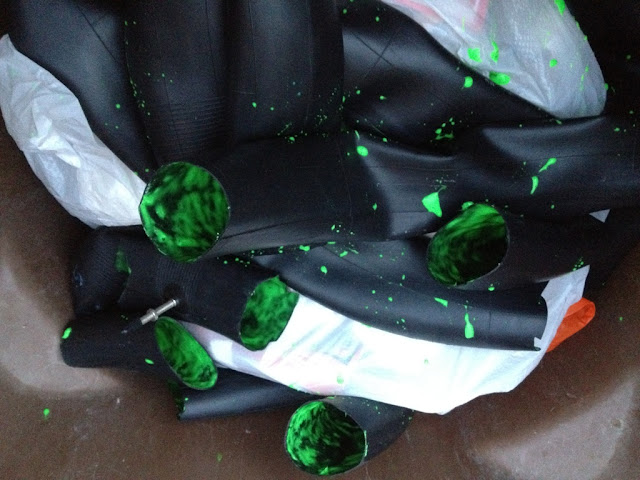 My iphone's interpretation of the inside of a slimed 26 x 4.0 tube. Other-worldy, I know. Something Jules Verne would be all about investigating. 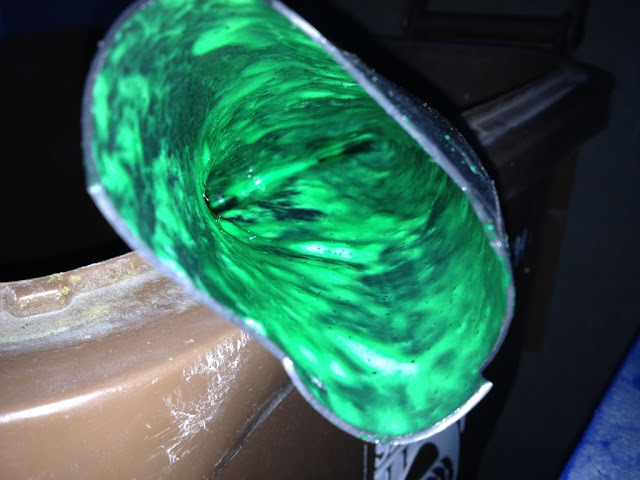 The pile of donated tissue. I keep remnants of different tubes around and use them for different things, but primarily, for making rubber bands. I just bumped the size range considerably on the top end of my rubber band factory's capability. Exciting stuff. Along with some salvaged valve stems for which I have the makings of a plan. 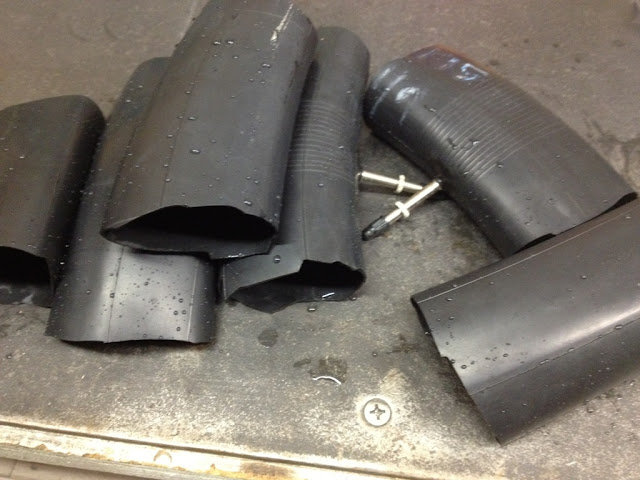 This was the first time I'd tried Slime and I'd read gobs of online testimonials purporting its magicality and so maybe my expectations were too high.  I certainly subjected it to the worst conceivable test.

On the other hand, it was a golden opportunity to prove itself as a wonder-healer of all manner of massive flat attack, but it backed away from the challenge.

I guess the bottom line for me is that I'm not all that impressed. It's possible that it may have sealed a puncture or two that I don't know about and saved me from a repair stop, but ultimately it didn't provide the solution that I hoped it would, and in the meantime, it added a bunch of weight.

It's possible that I'll experiment with Slime at some point in the future, but not anytime soon.  What I have been spending time reading about and that has my full attention and hopefulness is a tubeless solution, so that's probably what I'll be playing with next.
Posted by Pat S at 11:20 PM

Tip: colonscopies can reveal chronic green jello abuse without the need for resection.

For a minute there, I thought I was having those flashbacks they warned me about in the 70's.

FWIW I had a buddy who said put a bed spring through his tire once (folks used to use the hill behind town as a hillbilly garbage dump) and Stans actually sealed it up. I haven't tried it yet but I may yet try it one of these days.

Dam hateful goatheads.... are your tires still any good, or are you tossing those as an offering to the Flatstravaganza Gods also?

Dr. TLI (if that is indeed your real name), old-school as I am, I'm not yet convinced of the virtues of arthroscopy . . . nothing quite like a good old fashioned major incision, even if it does completely sever an artery. And you talk about chronic green jello abuse like it's a bad thing.

Verslow, stories about the incredible feats of Stans abound, and your buddy's is yet one more example. I've got a jug sitting on my workbench and I'll be trying it next to see what all the fuss is about. The tires are okay and even if they're not, they're still gonna be okay, because they cost the obscene amount of $120 each (unbelievable, I know, but fat tires are still niche and therefore incredibly expensive) and I refuse to let them die until I see ample threads showing. I'm enjoying your thread over on MTBR about how to spend a week in Sept, BTW. Hope you guys have a blast, wherever you end up.

There's a chance you're qualified to get a Apple iPhone 7.