A really rad adventure went down today, that I didn't really even see coming. It's big enough that I'm naming it the February BikeEVENTure.  What makes it even more amazing is that I didn't have to do one bit of planning or scheming . . . all I had to do was commit to throwing down.

It all started with an email from my friend Chip, earlier this week.  There was this google earth snip attached of the Spokane River, where it joins up with the Columbia River/Lake Roosevelt.  In gambling context, this is where the Two Rivers Casino lives.

He asked me if I knew anything about the riding along the banks of the Spokane River in this area.

He might as well have been asking me what I knew about the riding conditions on the moon.  I don't know about pregnant pauses in email exchanges, but after a lengthy delay spent figuring out what to type, I basically responded as honestly as I could by saying that I had no freaking clue and had never even begun to consider this as a riding opportunity.

In closing, I added that I was intrigued.

He responded by wondering if I would be interested in helping him check it out on this fine Sunday.

We launched our ride at the same place that the fisherpeople launch their crafts.


The first thing I'm sure you're wondering is how my fancy new camera bag performed.  Thanks for asking.  It did just fine.  It's a little bulkier than I would like and I'll be in search of a betterer solution, but this one will get me started in fine fashion. 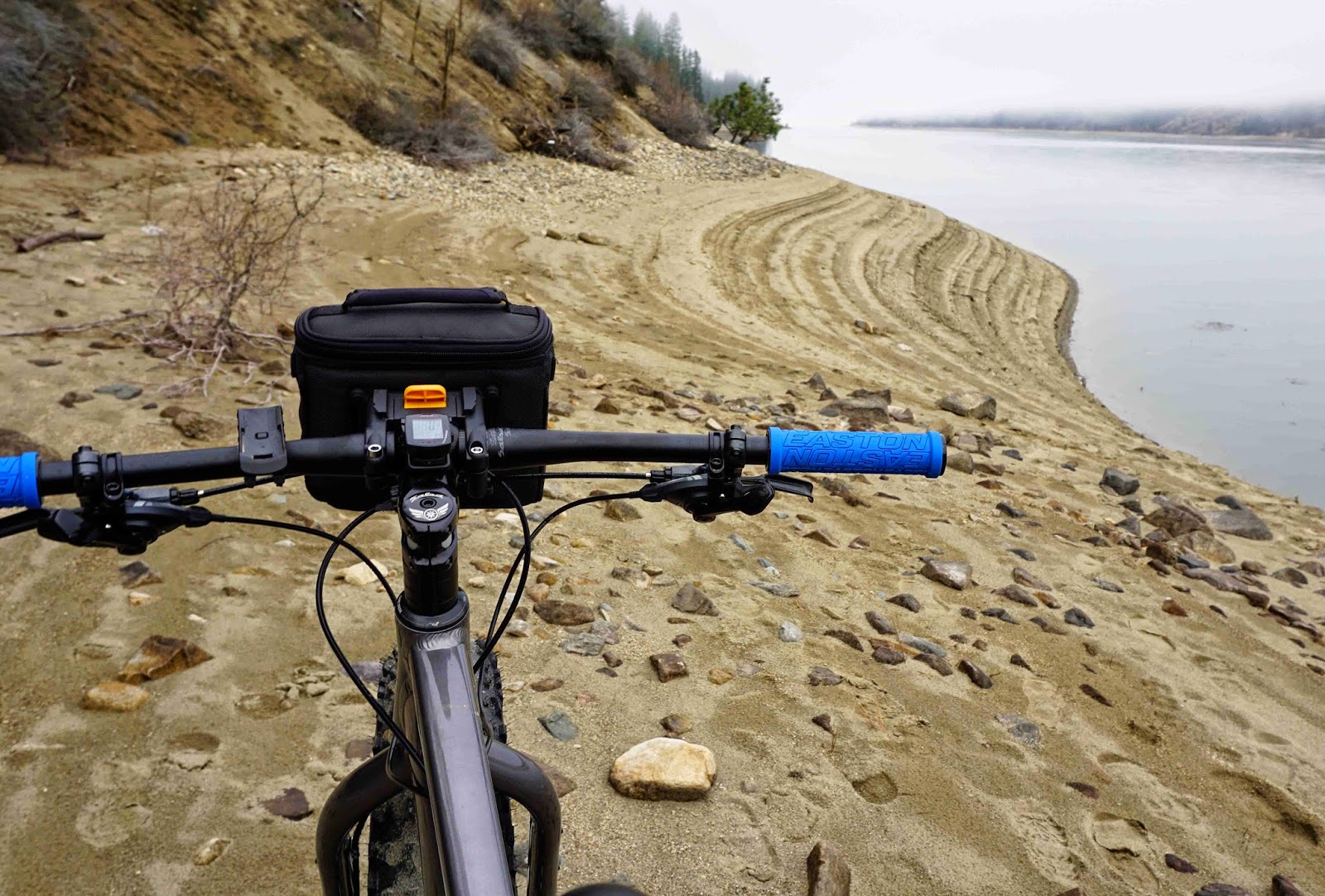 So what's the riding like along the banks of the Spokane River near the convergence with Lake Roosevelt, you ask?  Thanks for asking.  In a word, adventurous.  Chip and I both dig new adventures on bike and today we were gifted with one.  I'm getting to be a fairly old man and this was something totally new to me.


The camber on the way out meant that the right half of the tire didn't get much work.  That would change. 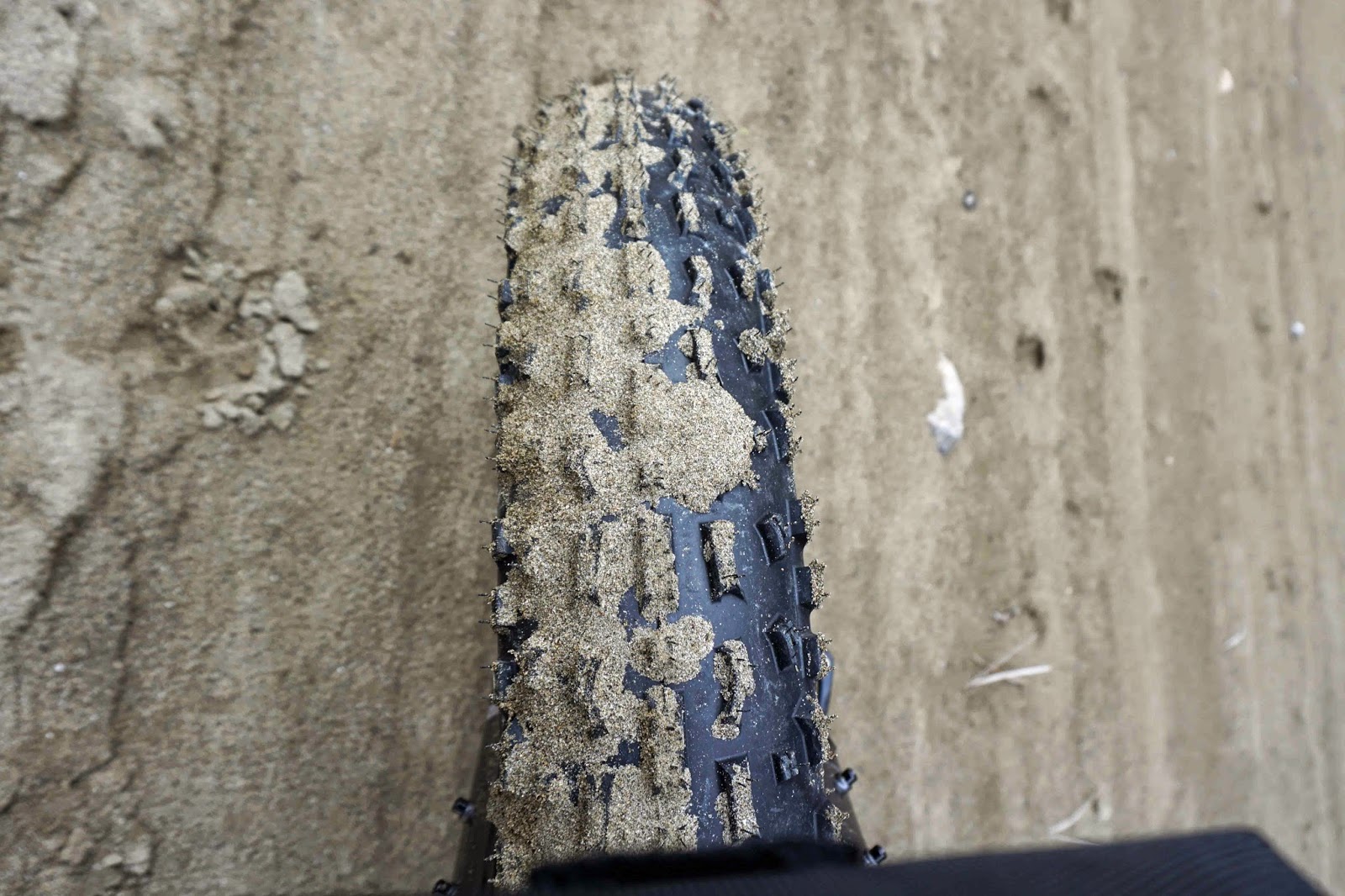 Beach find #1 was this cool bone.  If I had little kids at home, I would have snagged it for the perfect paddle that it is.

Hey.  HEY!!  Calm your ass down!  One innocent reference to corporal punishment and you guys come all unglued!  Fine, whatever.  I did not touch the paddle and it's laying exactly where I saw it, FWIW.  Geez, people. 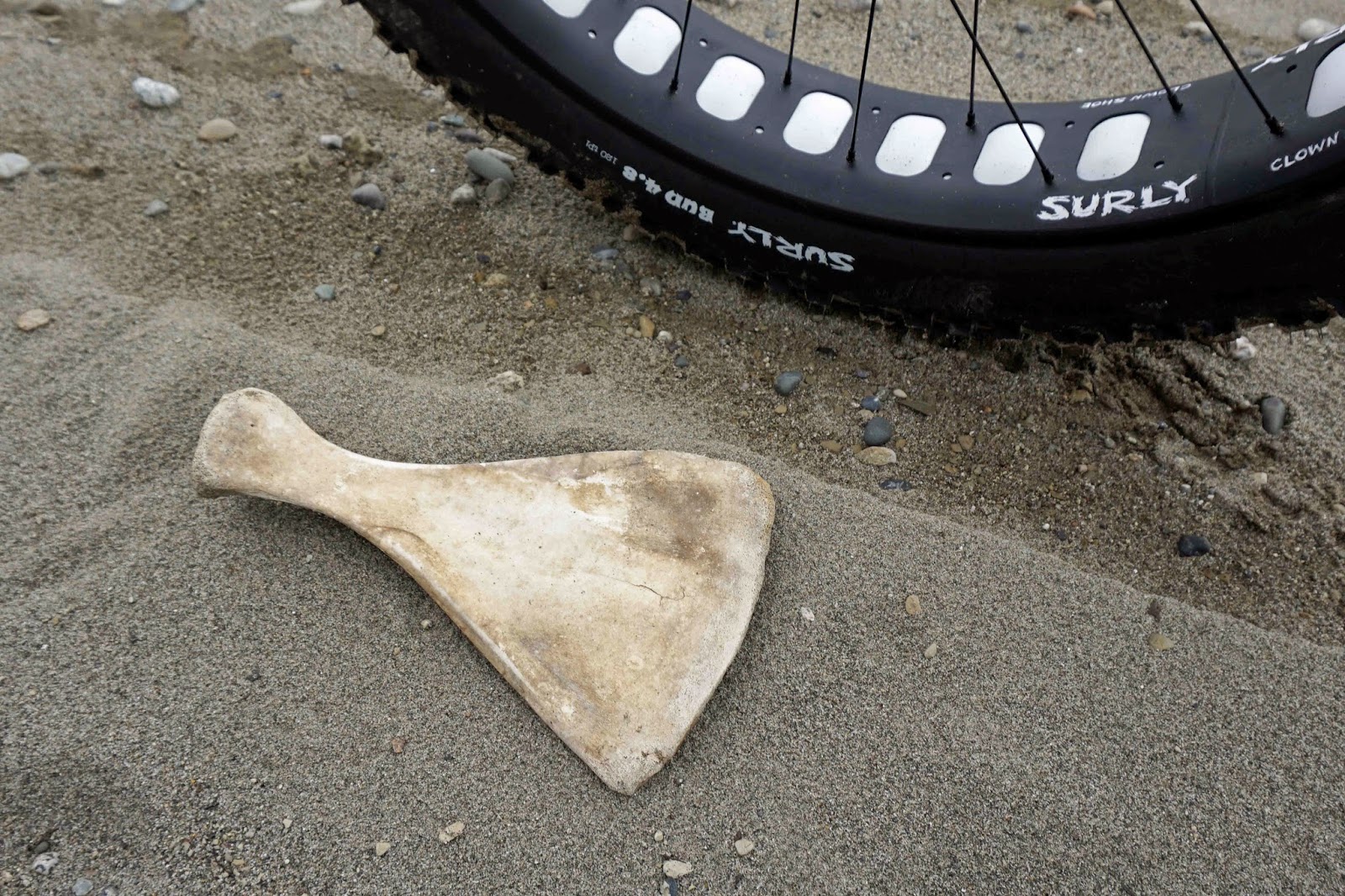 In case it looks like it was all rainbows and unicorns out there, it wasn't.  There was sand, yes, but there was also nasty, slippery mud just below the surface, in varying degrees.  There was no indication of where it was or wasn't present.  My super knobby, grippy Lou on the rear?  This is the mark it leaves when it slides out. 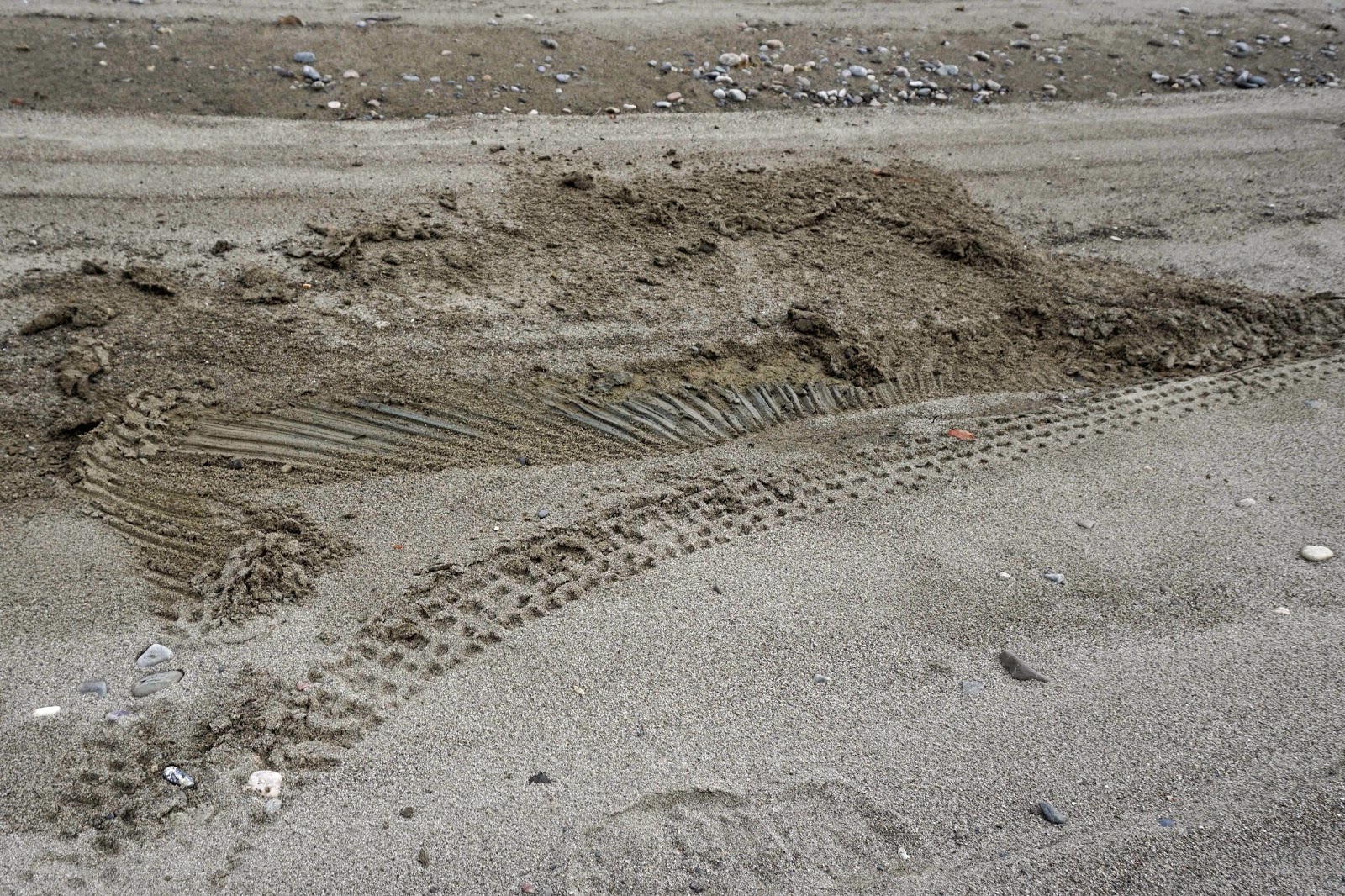 There were a coupla pretty filthy inlet crossings, and this was one of them.  Slime at the bottom and slime on the climb out. 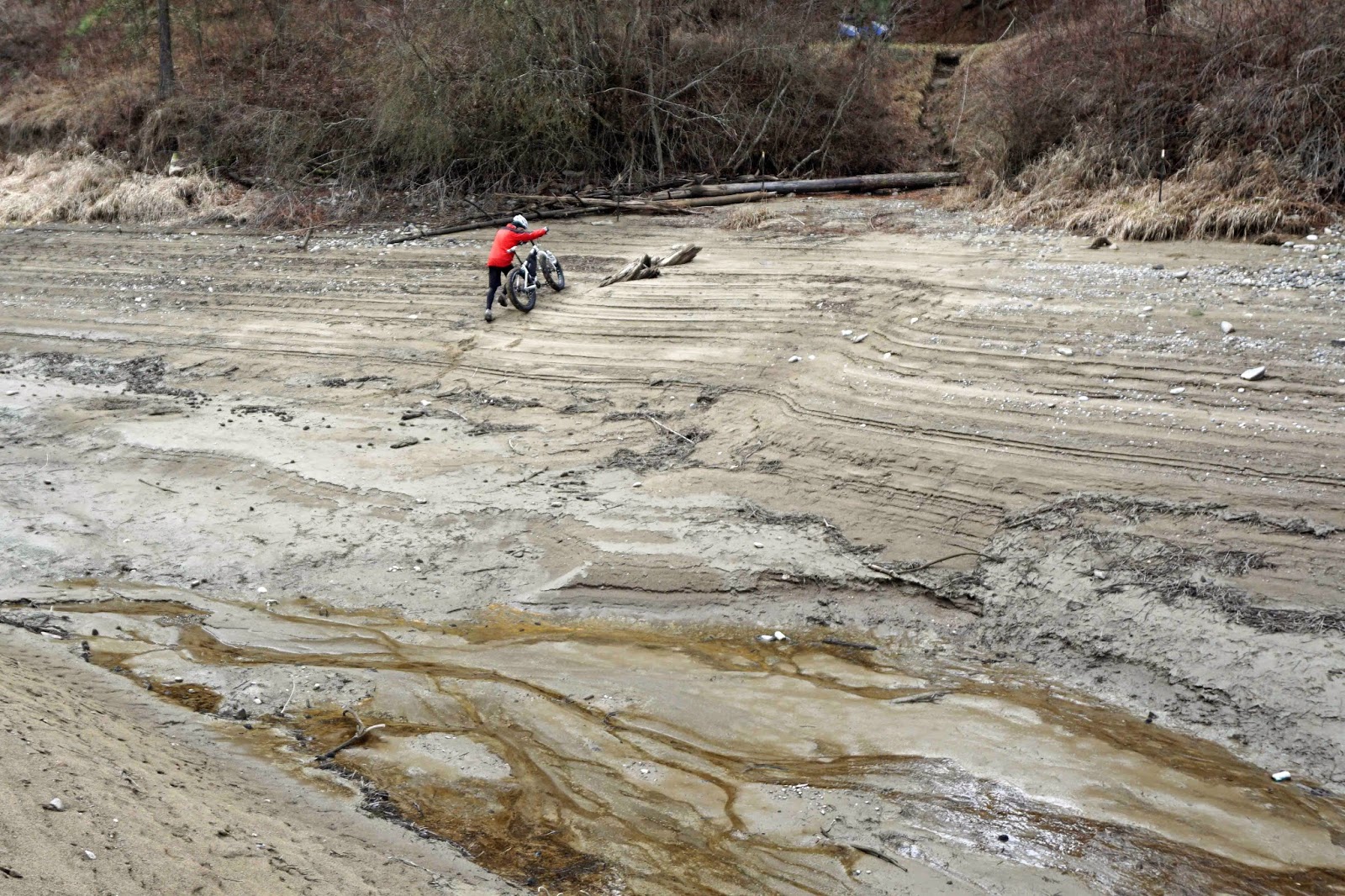 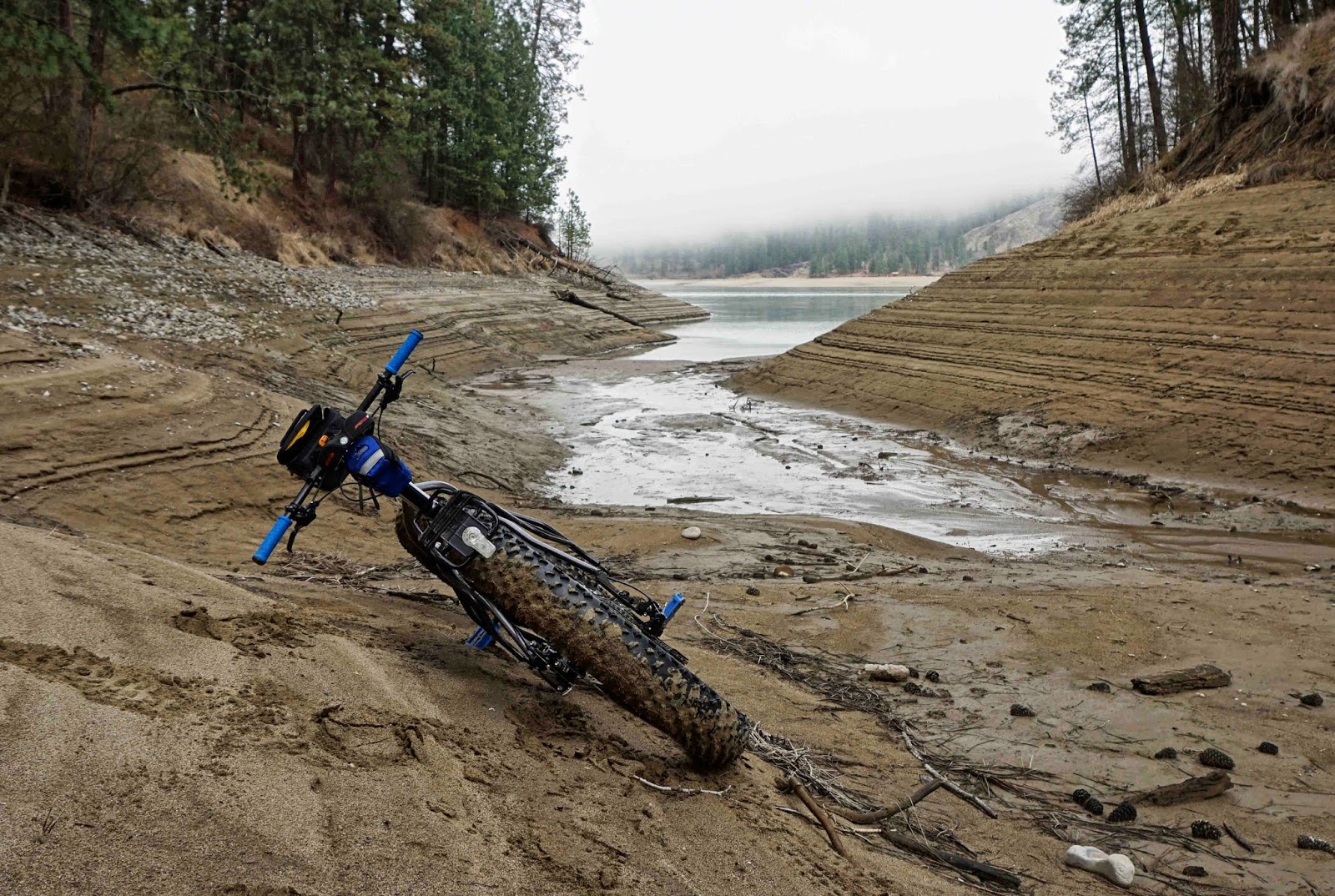 Our lovely, rideable beach abruptly ended about a mile-and-a-half downstream of the boat launch.  We did some exploring by foot to see whether there was any possibility of a continuous route, but pretty much came up empty. 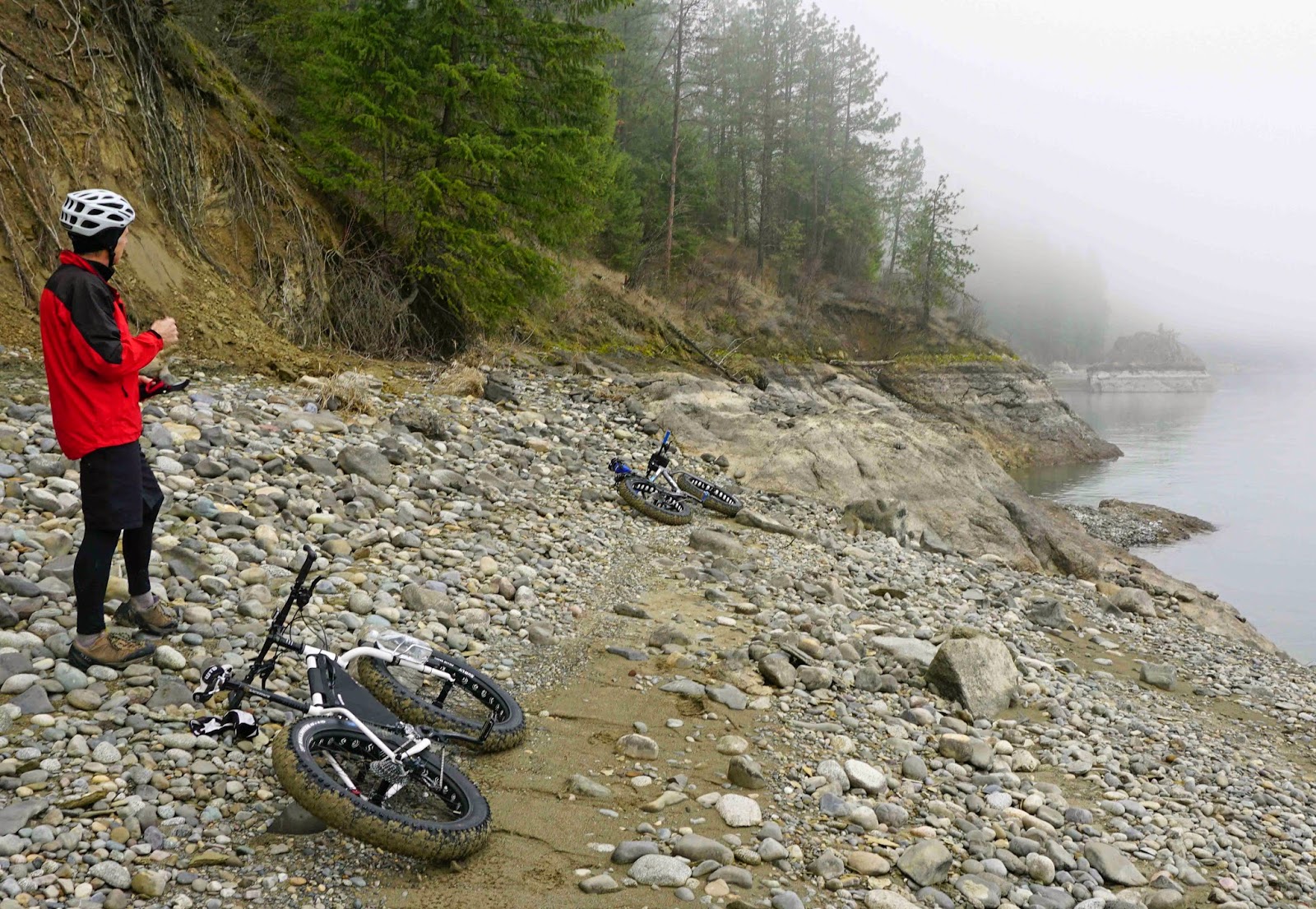 The fog was starting to lift on the way back.  Things were looking up.  In addition, we were both starting to gain some experience and confidence in our bikes' ability to excel on these surfaces. 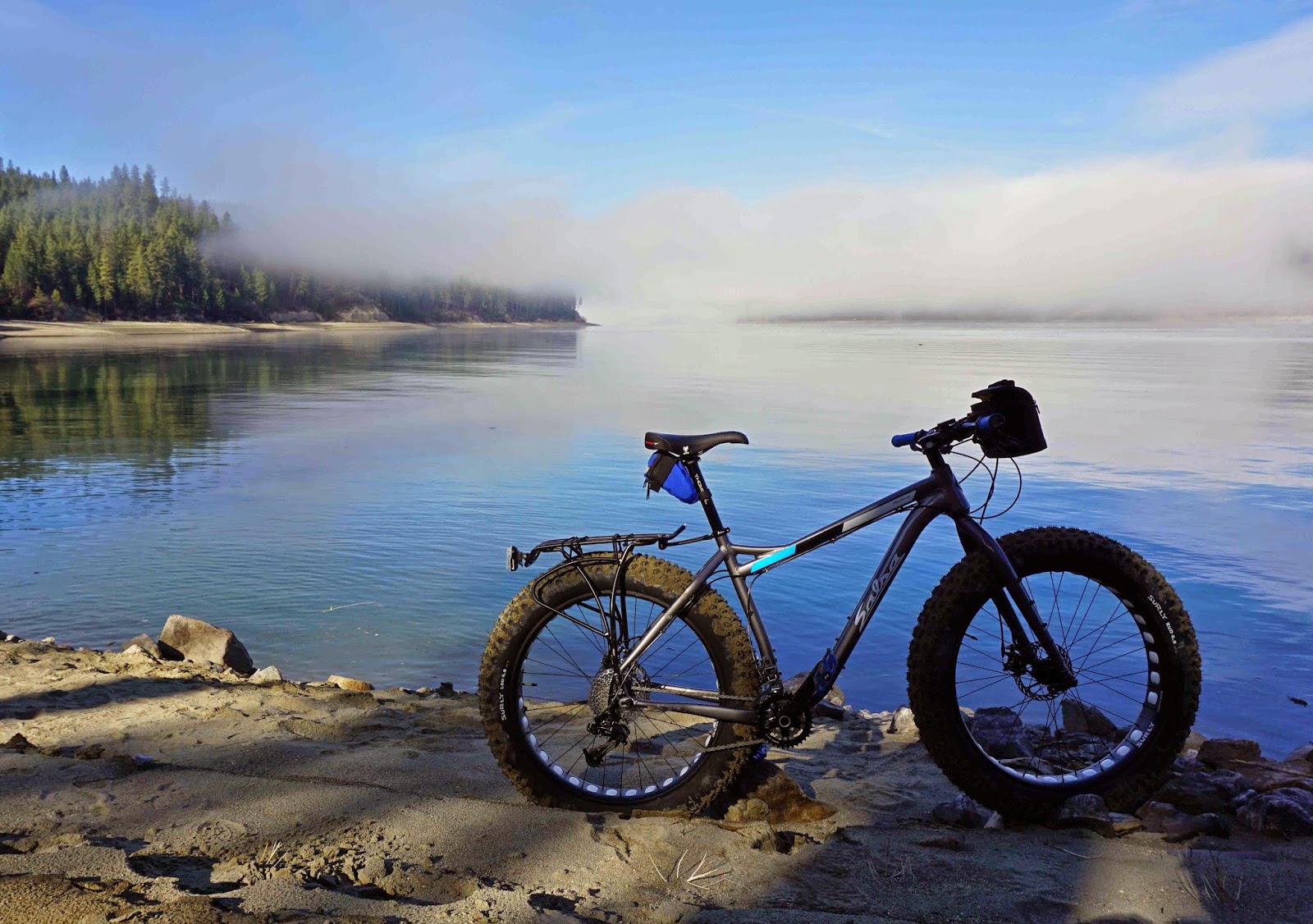 We then set out in the upstream direction of the launch.

Just to not paint too rosy of a picture of the day, this ride involved a shit-ton of hike-a-biking.  For reference, we were out almost four hours, and covered a distance of about 10 miles.  I can't even be confident of that distance, because for a lot of the time, we were going too slow for my computer to register.  Trees falling off the bank and toward the river are everywhere, and we climbed over a buttload of 'em. 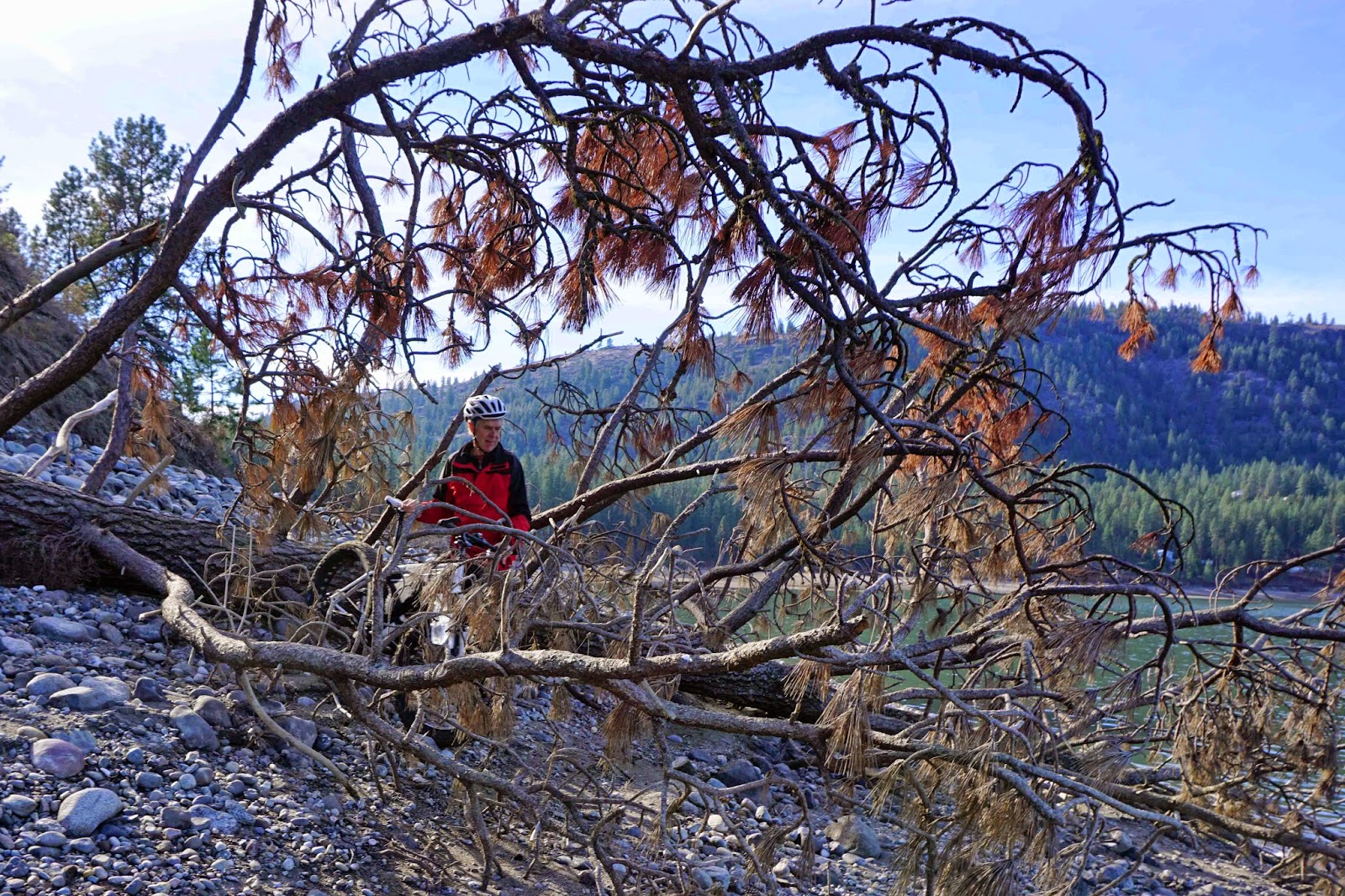 Every once in a while, though, you'd hit a sweet spot that would make the whole thing worthwhile. 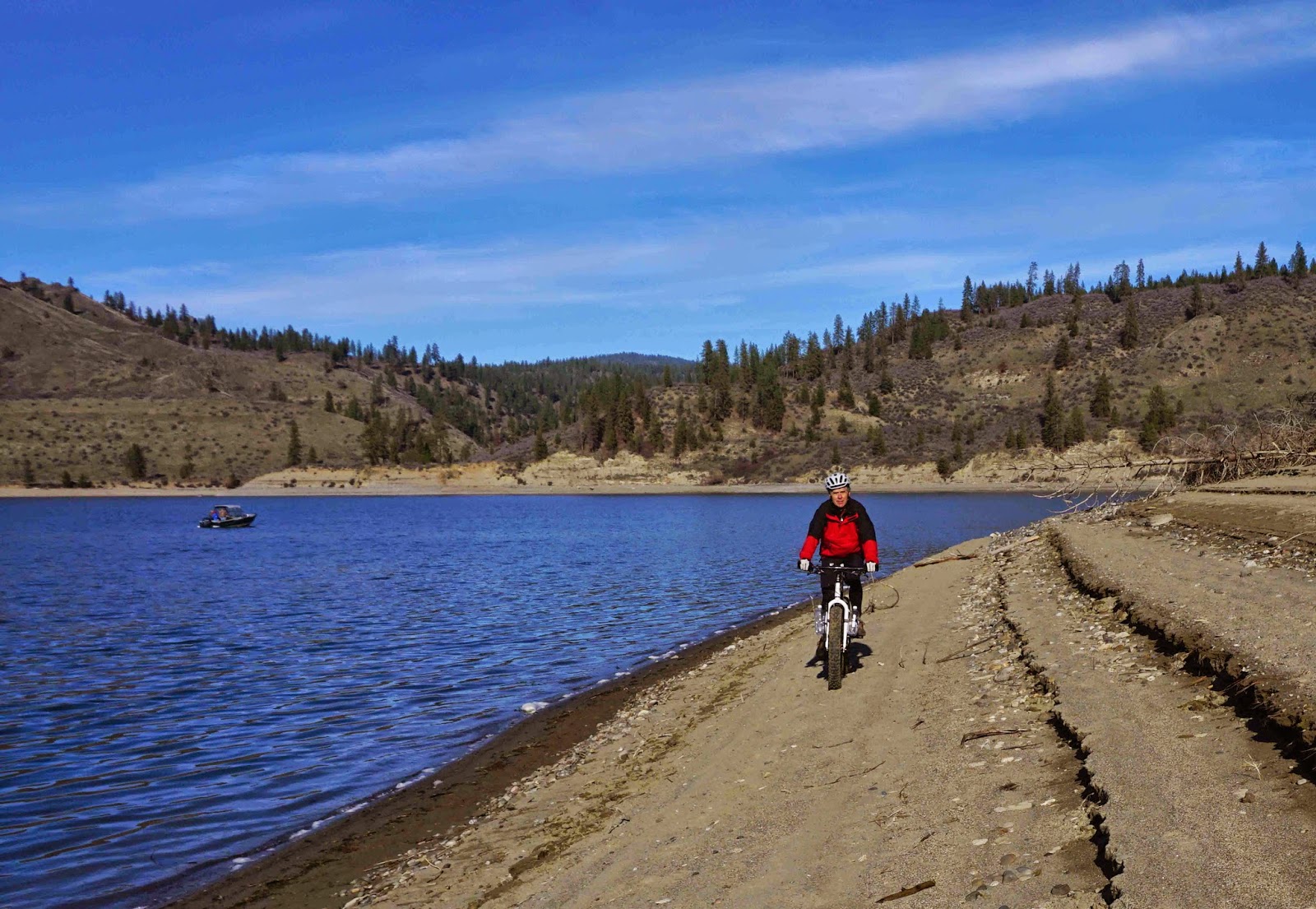 I feel like I learned a lot about high volume, high flotation tires/rims on this trip.  Or have just started to.  I intentionally began the ride with my tires in the 8-9 psi range and incrementally aired down throughout the ride.  I ended up at 5/4 psi front/rear.  And I'm pretty sure I didn't get low enough.

What I can tell you is that a the start of the ride I was relatively tentative about my grip and ability to roll over fields of river rocks like these, and by the end, I was confident in attacking them.  Not that there's not a limit, of course, but I came away quite surprised at the boundaries of that limit. 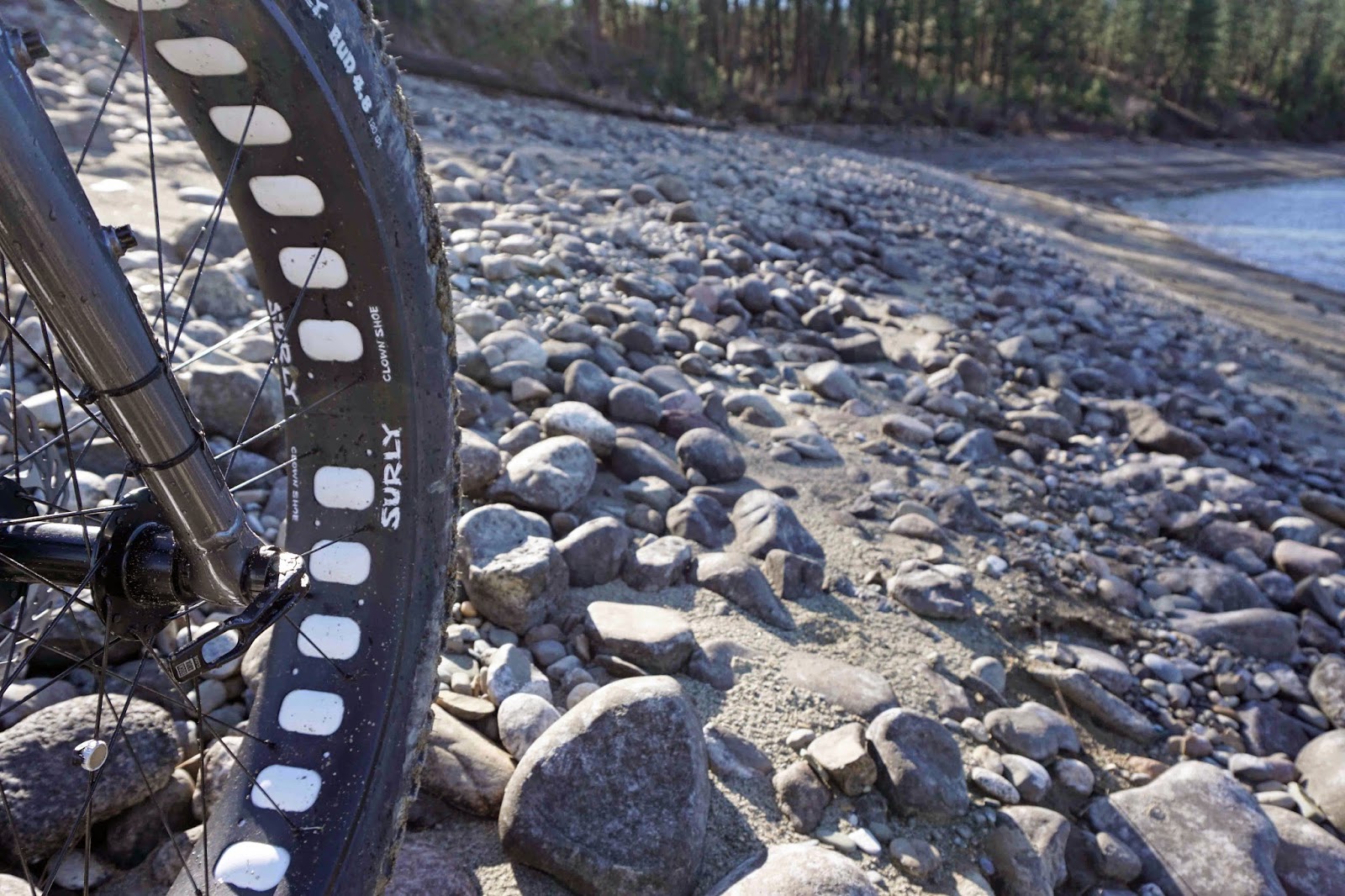 Speaking of limits, did I mention the hike-a-bike component? 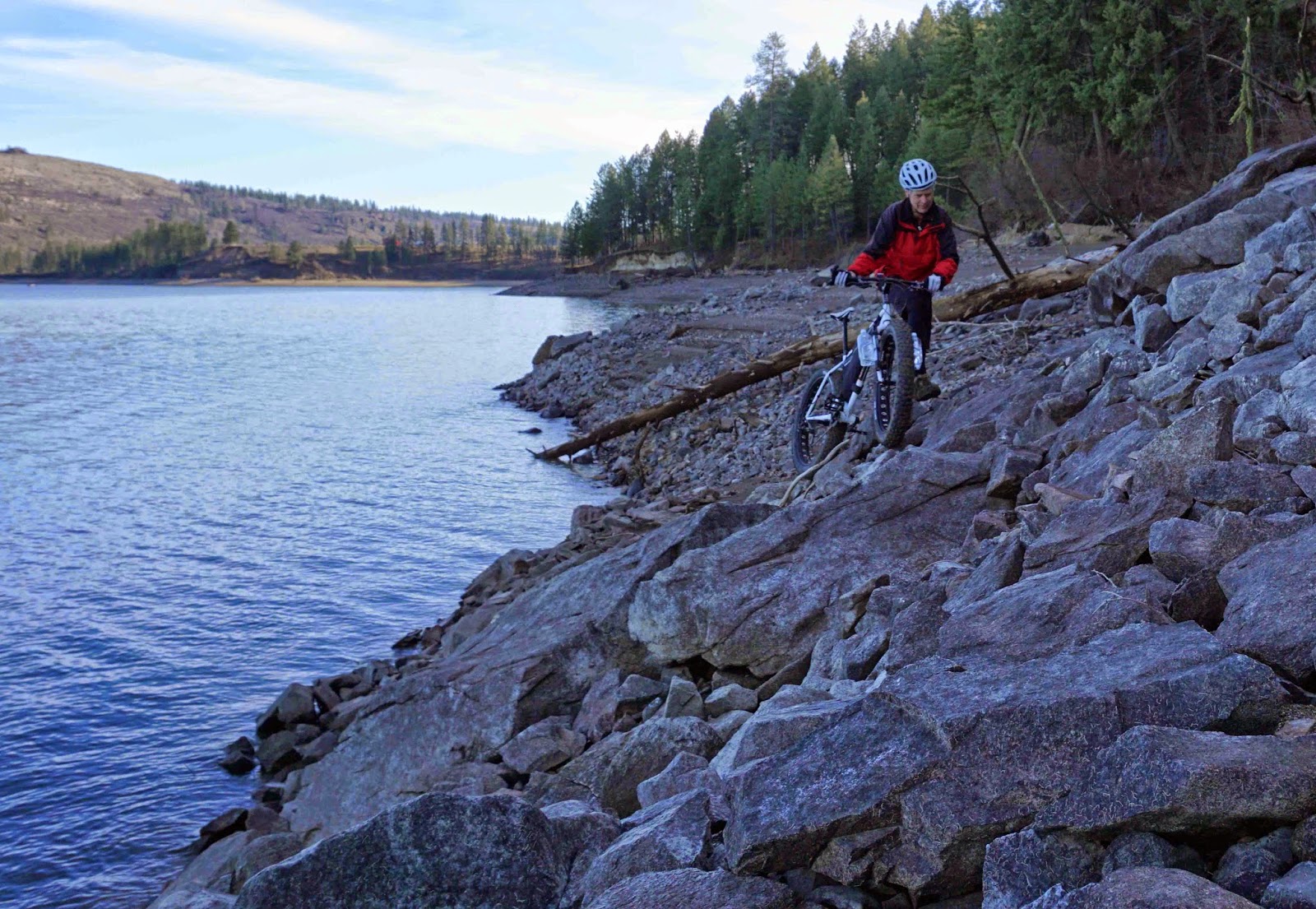 But when the riding was good, it was really good. 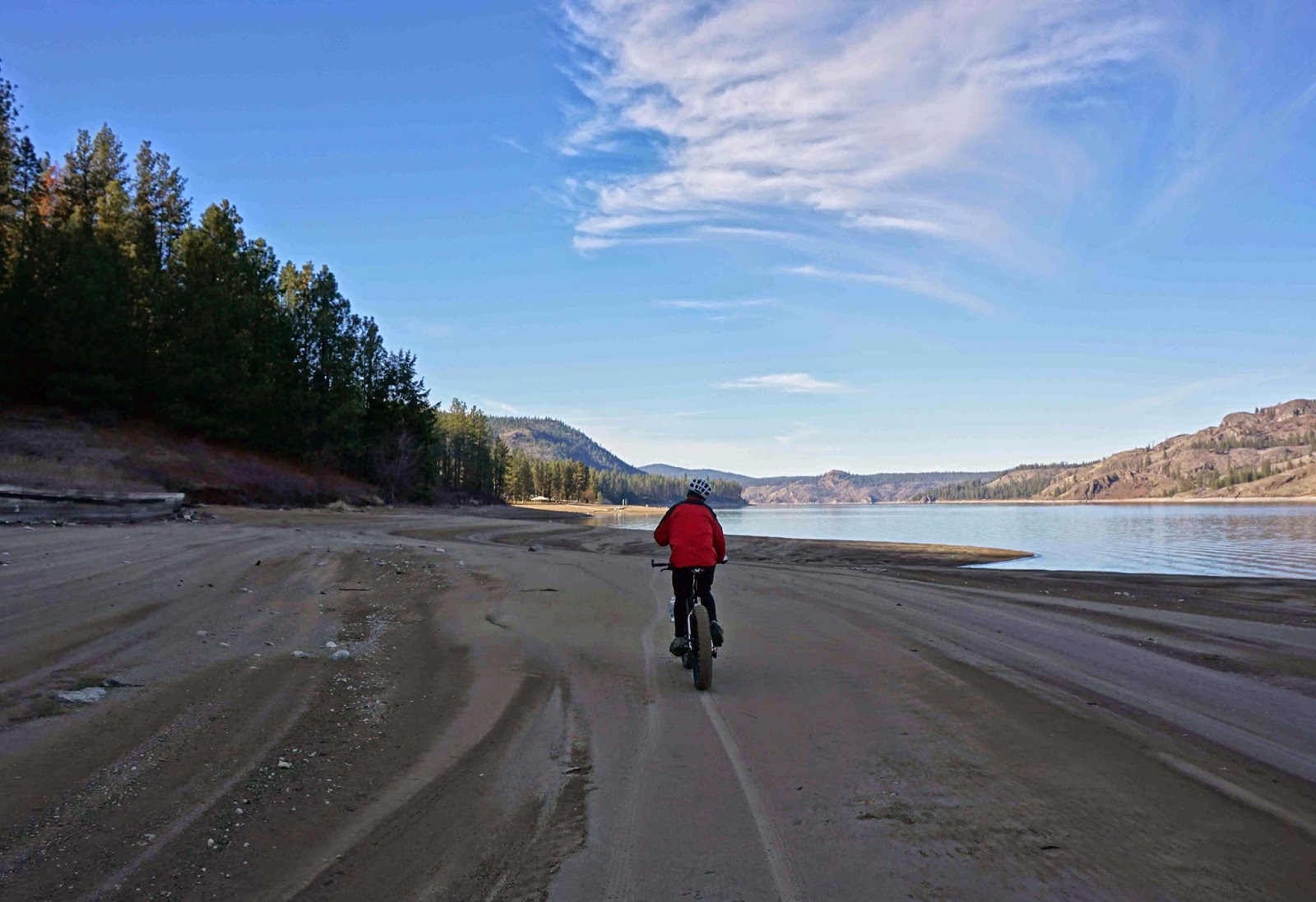 Beach find #2 was a genuine Frisbee brand frisbee. Unfortunately, banging it against a fallen tree to clear the mud that had accumulated in the concavity broke it in half, rendering it beach trash.  At this point I was compelled to carry it back, so as not to be a beach litterbug.  Damnit. 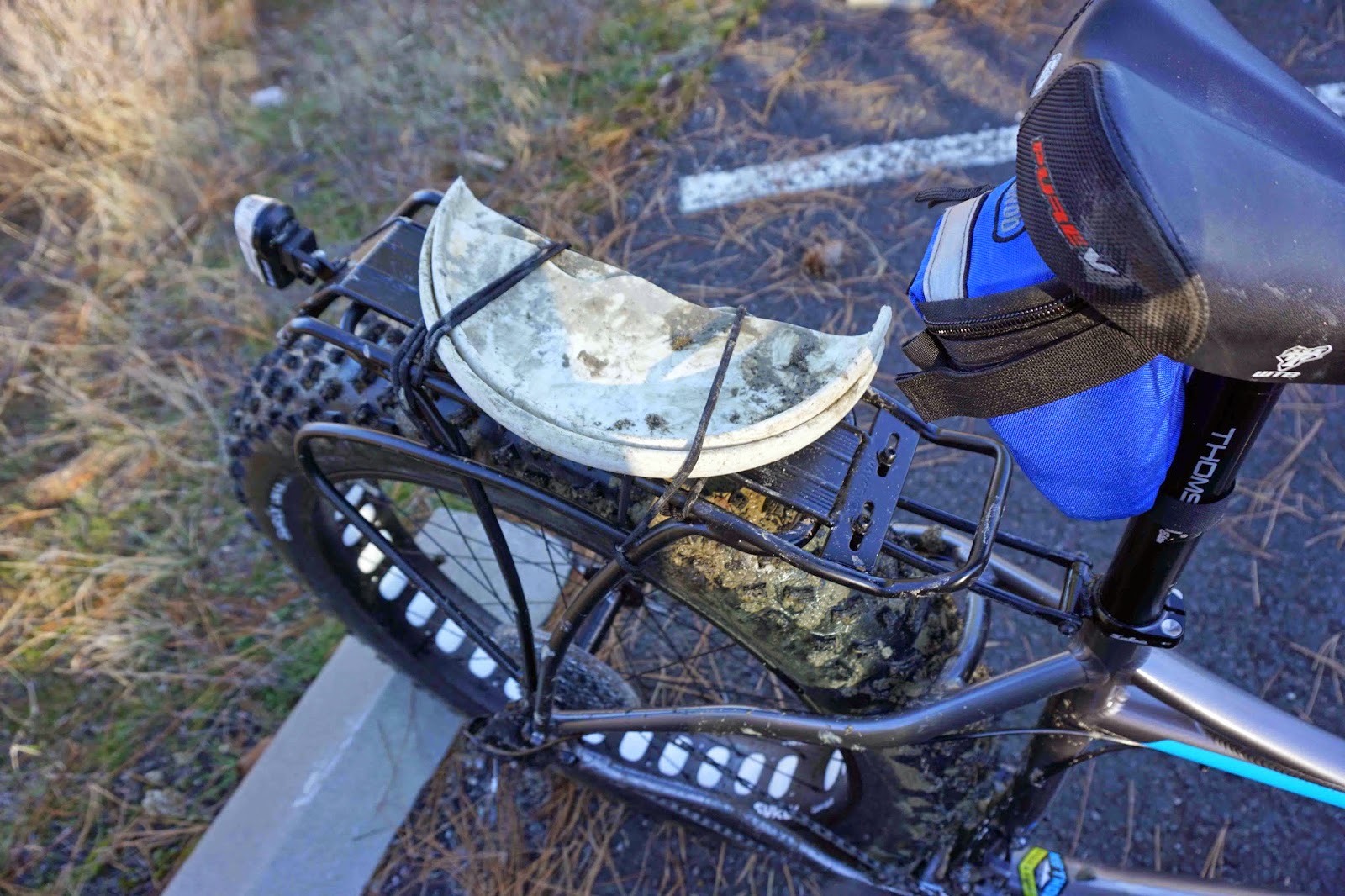 So in conclusion, a coupla primary takeaways:

First, the Blackborow is rad.  I am super spoiled and privileged to own both a Bucksaw and a Blackborow, and the Bucksaw is way sexier, for sure.  But if I had to choose between the two, at this 5 minutes, I wouldn't even need time to think about it - it'd be the Blackborow.  "For anywhere a regular bike can go, there's regular bikes.  For everywhere else, there's the Blackborow."

Second, and most potentially impactful to you, gentle reader, is the fact that the exploration of this area is far from complete . . .

The car ride back was about feverishly processing what we had just experienced and there was this mellow buzz about the parts we hadn't got to, and then when I checked my email tonight, Chip had already developed the Phase 2 plan.  And it sounds rad.

The return to the scene will probably happen sometime next month, if this weather pattern holds.  We both felt that some drying out of the substrate would be a good thing, rideability-wise.

We also both feel like this is too bigga thing to keep to ourselves, so if you own/ride a fatbike and are interested in the Phase 2 opportunity, hit me up at pat[dot]sprute[at]gmail[dot]com and  I'll keep you in the loop on Chip's Phase 2 agenda.
Posted by Pat S at 11:52 PM

that looks great! i was looking for sandy places to ride and was going to take my fat bike to people's park. funny i never thought of lake roosevelt as i spent lots of summer weekends there - neighbors had a cabin somewheres east of keller ferry. i think the water is low until june. i started googling and found lots of dirt roads and trails for the fargo, too. Hawk Creek Harbor looks promising. (celtictunes at yahoo)

Chip and I both feel like we've just exposed the tip of the iceberg. I think there's a ton of fatbike riding fun to be had on those banks. The water actually drops WAY down in late spring, for fish run and flood control purposes, just before they jack it up for max power storage in the summer. Exploring at "low tide" could be really fun. I'll keep you in the loop regarding any future trip out there.

Hi Pat, I have been reading your posts with some interest, particularly in the JWT ride you did a couple of years ago. We need to talk! BTW- I was a campground host at Porcupine Bay last summer and was dismayed to find you riding in the drawdown area (the banks) of Lake Roosevelt. You see, it is against park rules for bicycles to be anywhere but on paved surfaces of the park. When (not if) a park ranger sees you, you WILL be cited and fined. You are allowed to walk and hike in that area, just not bike. Yeah, a huge bummer I know, cuz I took my bike with me last summer to get in some off road action, but was stymied by the rules. All I can say is the way it was explained to me is the rules are there for the preservation of the park and its resources, period. So take care, and watch your six! For a list of park rules (very dry reading but very informative) check out http://www.nps.gov/laro/parkmgmt/upload/2014_Compendium.pdf. That document is a list of rules specifically for Lake Roosevelt National Recreation Area (LRNRA), and the Lake Roosevelt website that covers such things http://www.nps.gov/laro/parkmgmt/lawsandpolicies.htm

If you need your ex-girlfriend or ex-boyfriend to come crawling back to you on their knees (no matter why you broke up) you have to watch this video
right away...