It all started with a text message on a dark and stormy night, exactly one week ago.  (Okay, the dark and stormy part is an embellishment, but do you want me to tell a story, or deliver the stock market report??  Okay, that's what I thought, then.  So shut your pie hole.)

So on this dark and stormy night, the text message read exactly as follows.  And I quote.  Verbatim.  Reproduced here just as written.

"Steve and I riding Vantage sunday. Prob ride to whisky dick bay.  Anyone welcome. No time set yet."

Holy, Living, Hell.  Talk about your heart pounding immediately out of your chest.

I'd already sort of committed to a ride with Chip on Saturday, and I couldn't afford the time to ride on both days, so I had to be kind of a heel and back out of the Sat ride, but in my defense, once the Q is in your blood, you are kind of helpless to its allure.  And the fact that there was this grand opportunity to ride it in February (are you freaking kidding me???), well, you just don't say no.  Sorry for being such a heel, Chip.

The message came from Ward, my Yakima-area buddy who has the connector tendencies and charisma to pull people together to do rad riding shit.  The message didn't go out to just me, and a flurry ensued, and five dudes ultimately scrambled to put all their other life shit aside and rally down to humble Vantage, Washington, on the morning of Sunday, Feb 22, '15.  At around 10. 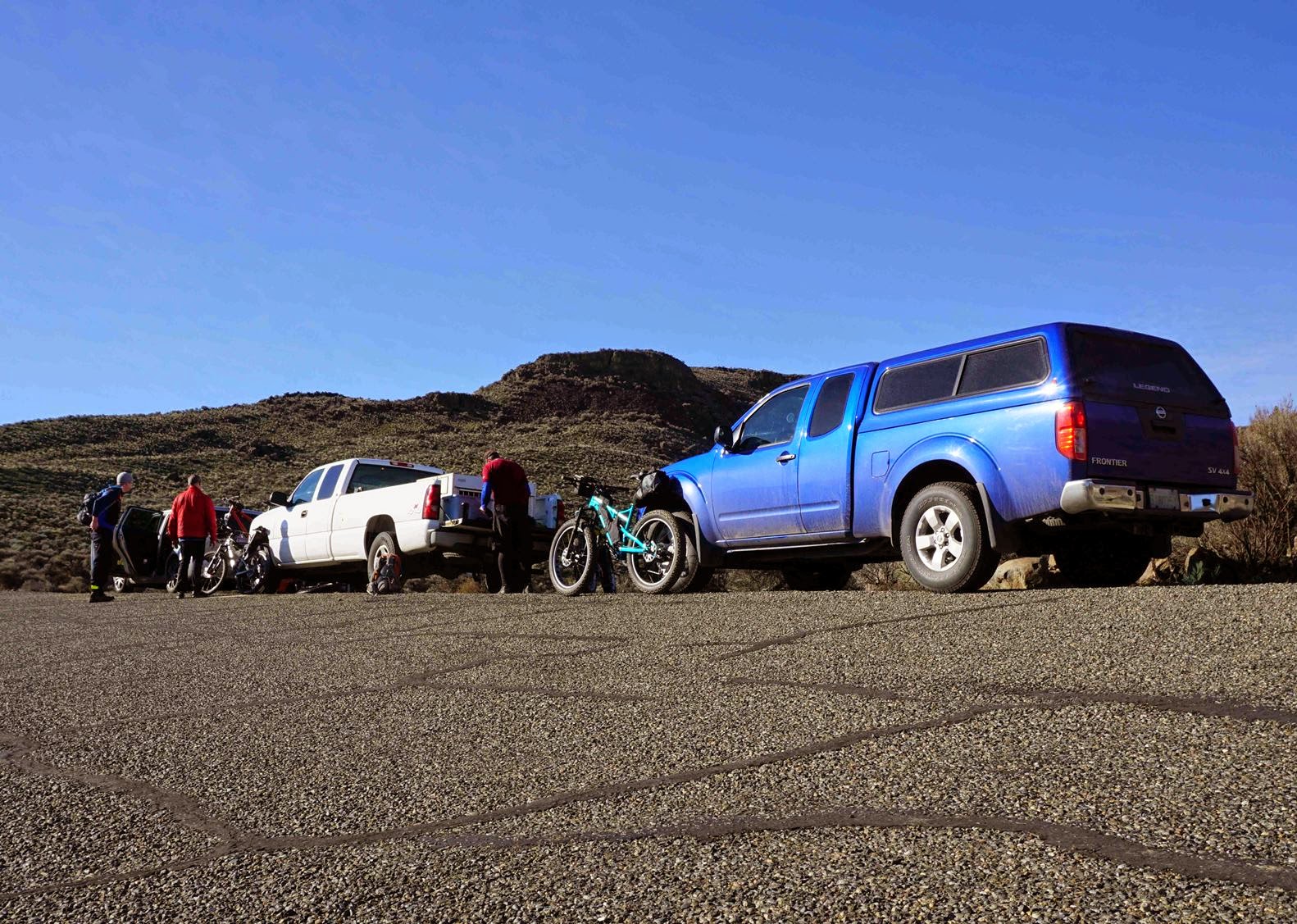 Shawn, of NW fatbike fame on FB, had been out to the Q before, and so had I, but never at the same time.  Once you've been in the Q with a dude, you have a bond.  It sounds corny, but it is just flat out true.  It was cool that we were going to have this chance to suffer together. 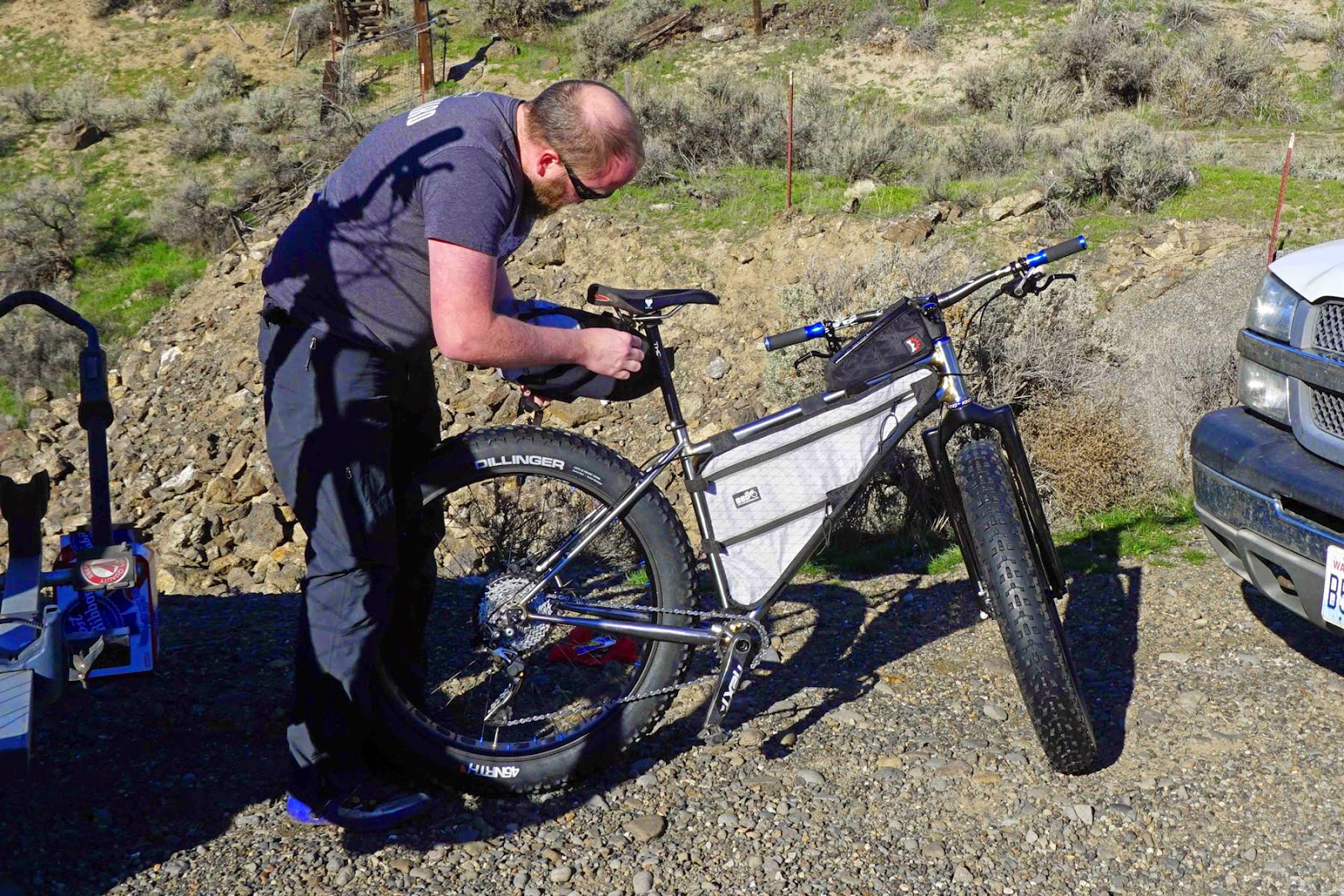 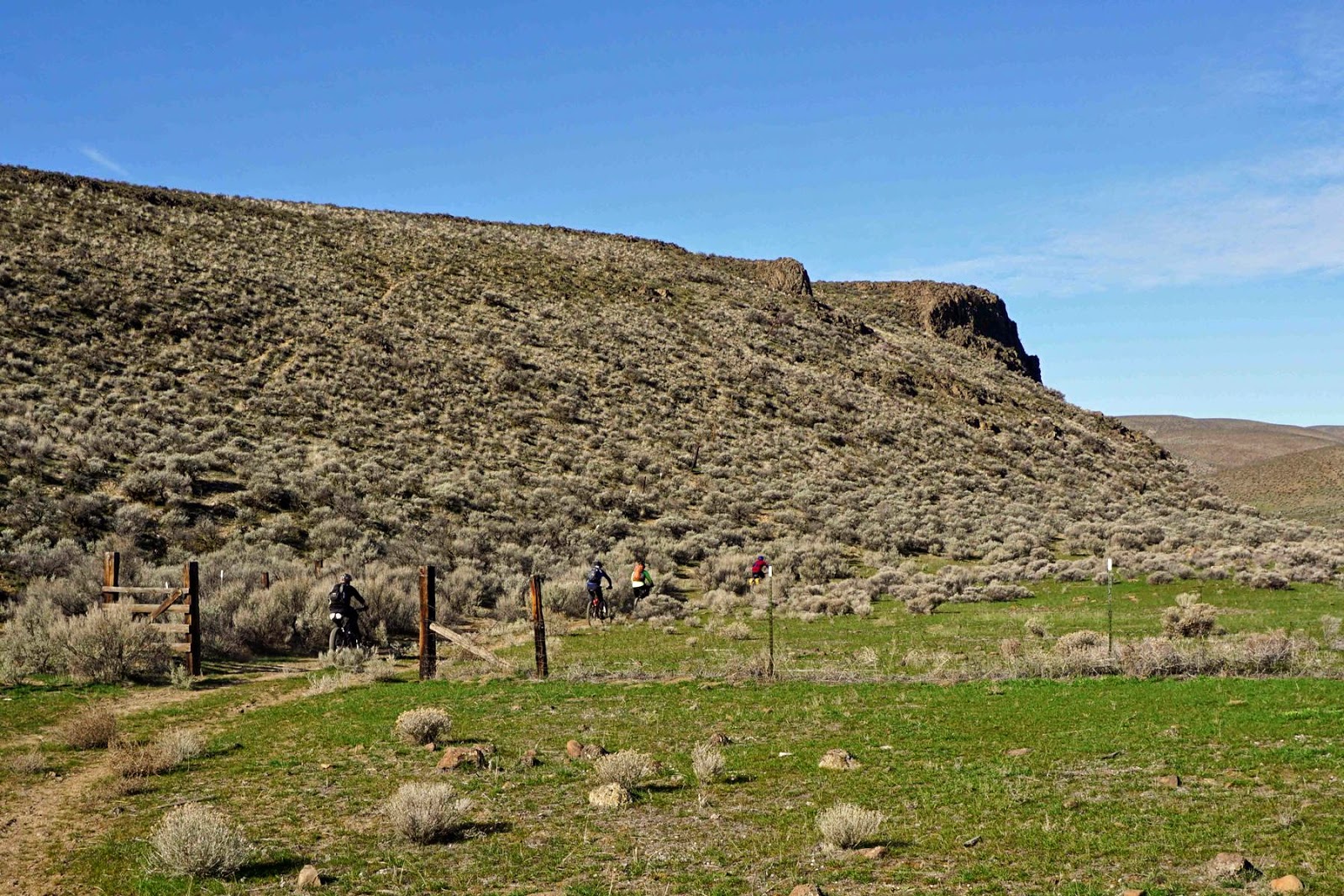 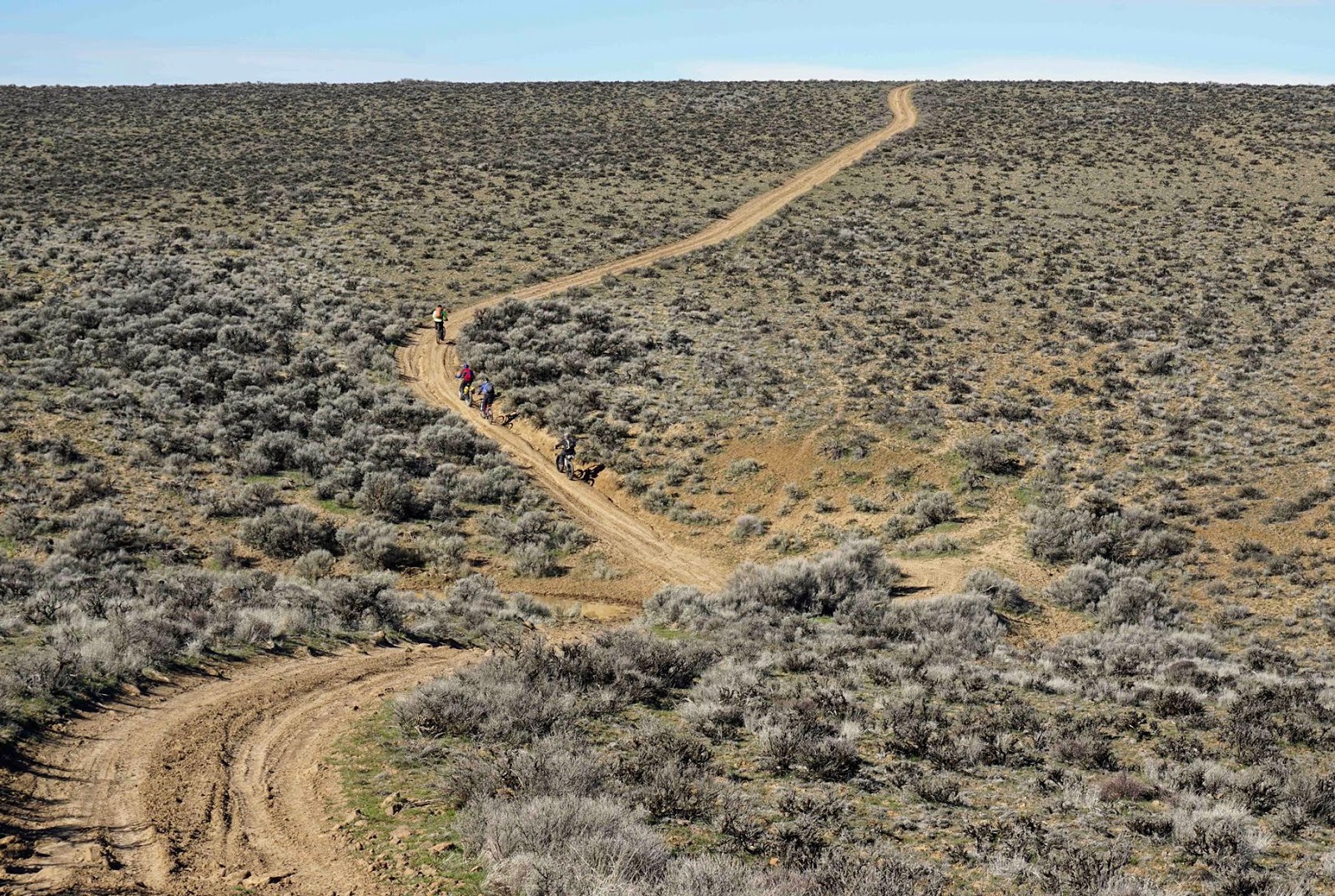 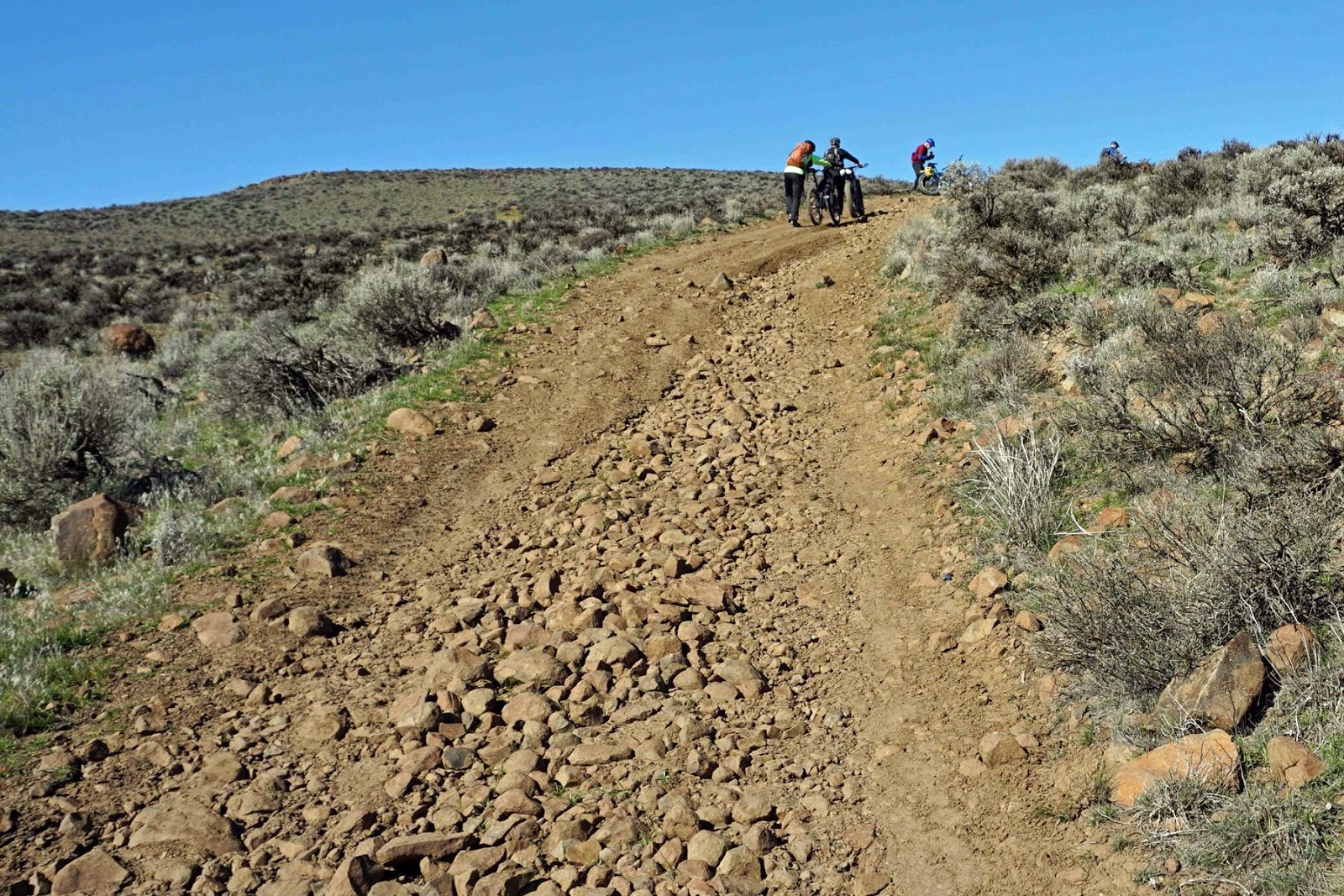 Too little oxygen, too many layers . . . 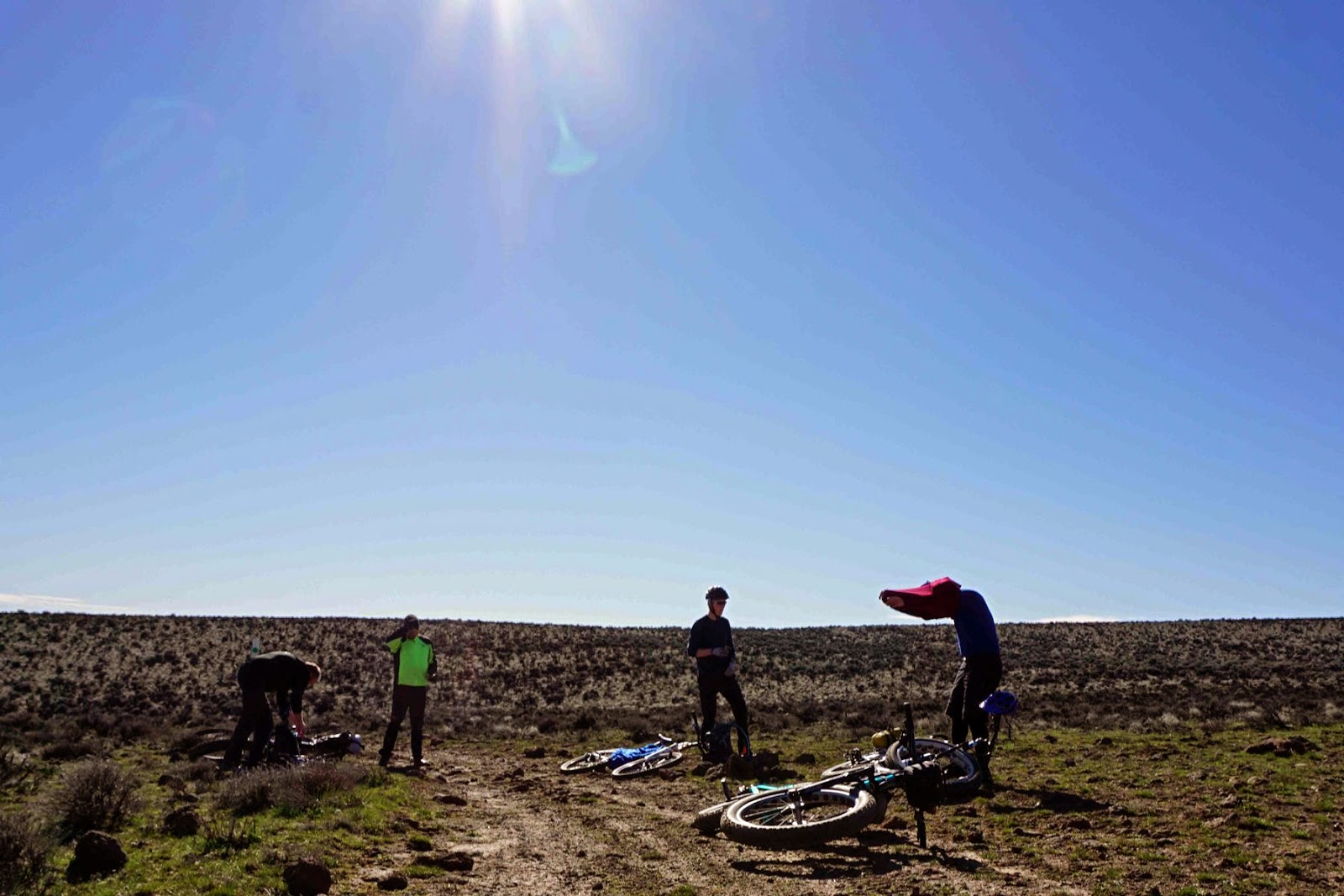 The wind never, and I mean never, does not blow in the Q.  It's why they build wind farms there.  But the wind was not blowing.  And the sun was shining.  On Feb 22.  In the Q.  Are you shitting me. 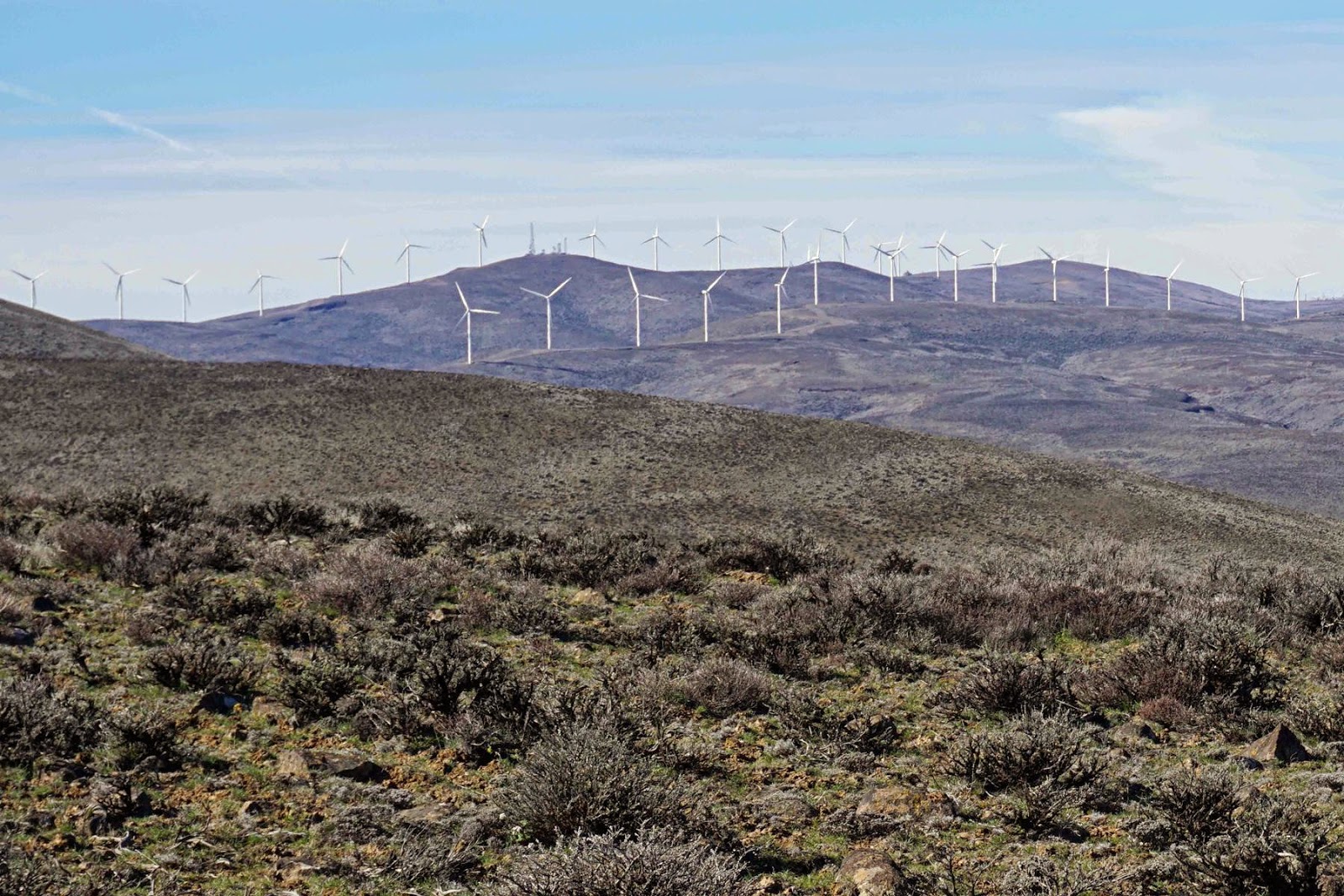 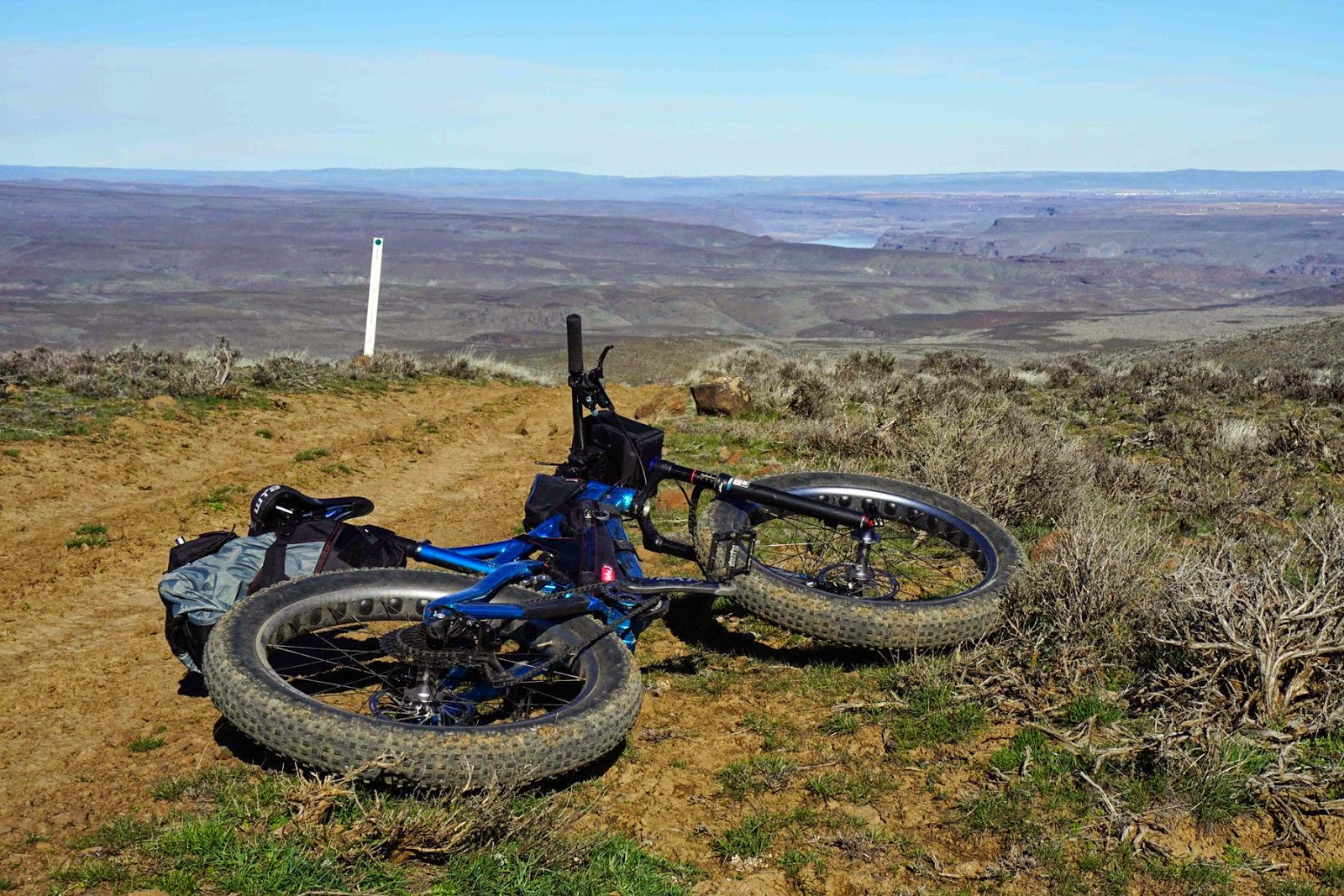 Soon thereafter, the well-earned descent began, and we could once again assume our roles as men, instead of weeping, climbing, ladies. 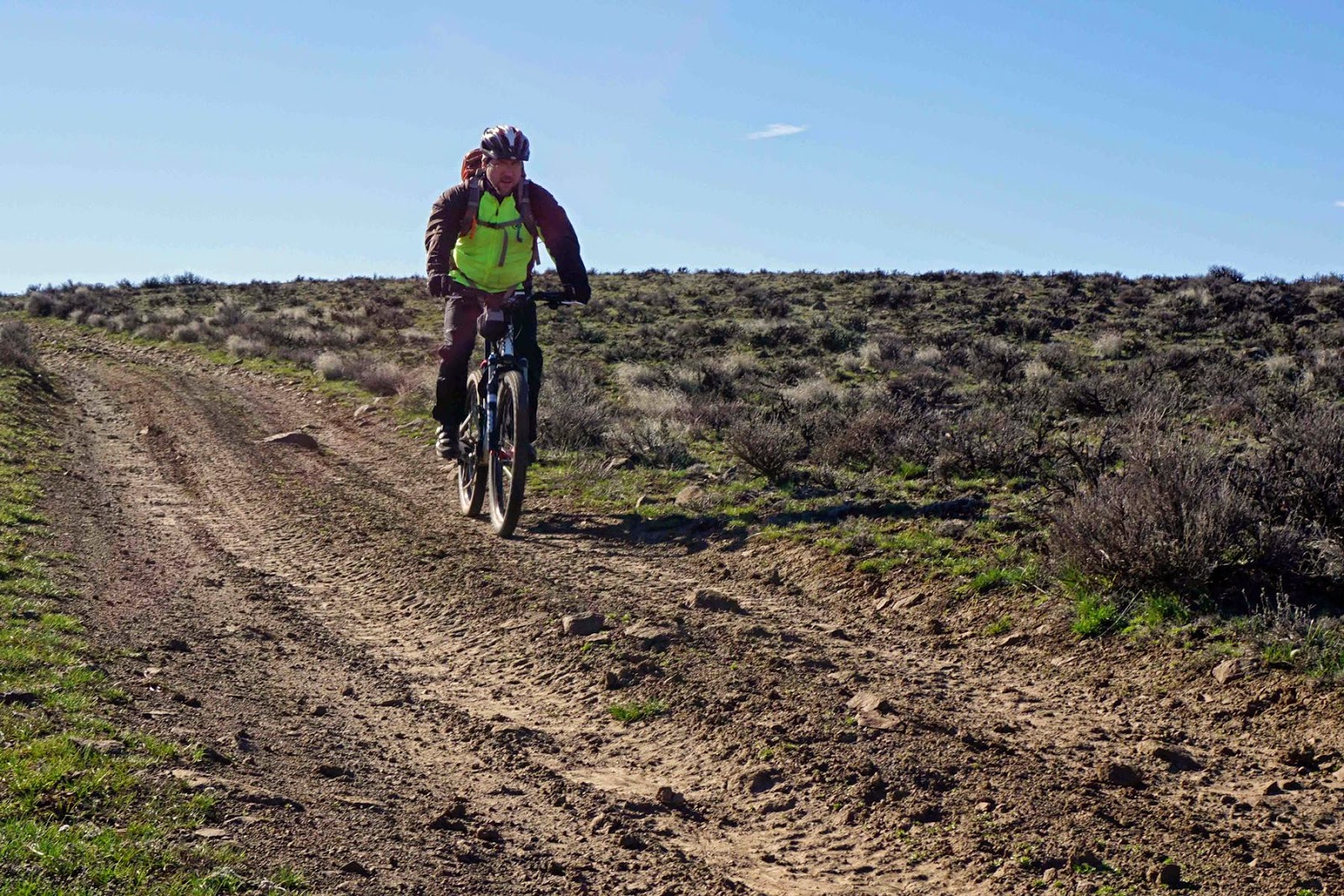 Randy, miserable and killing it . . . 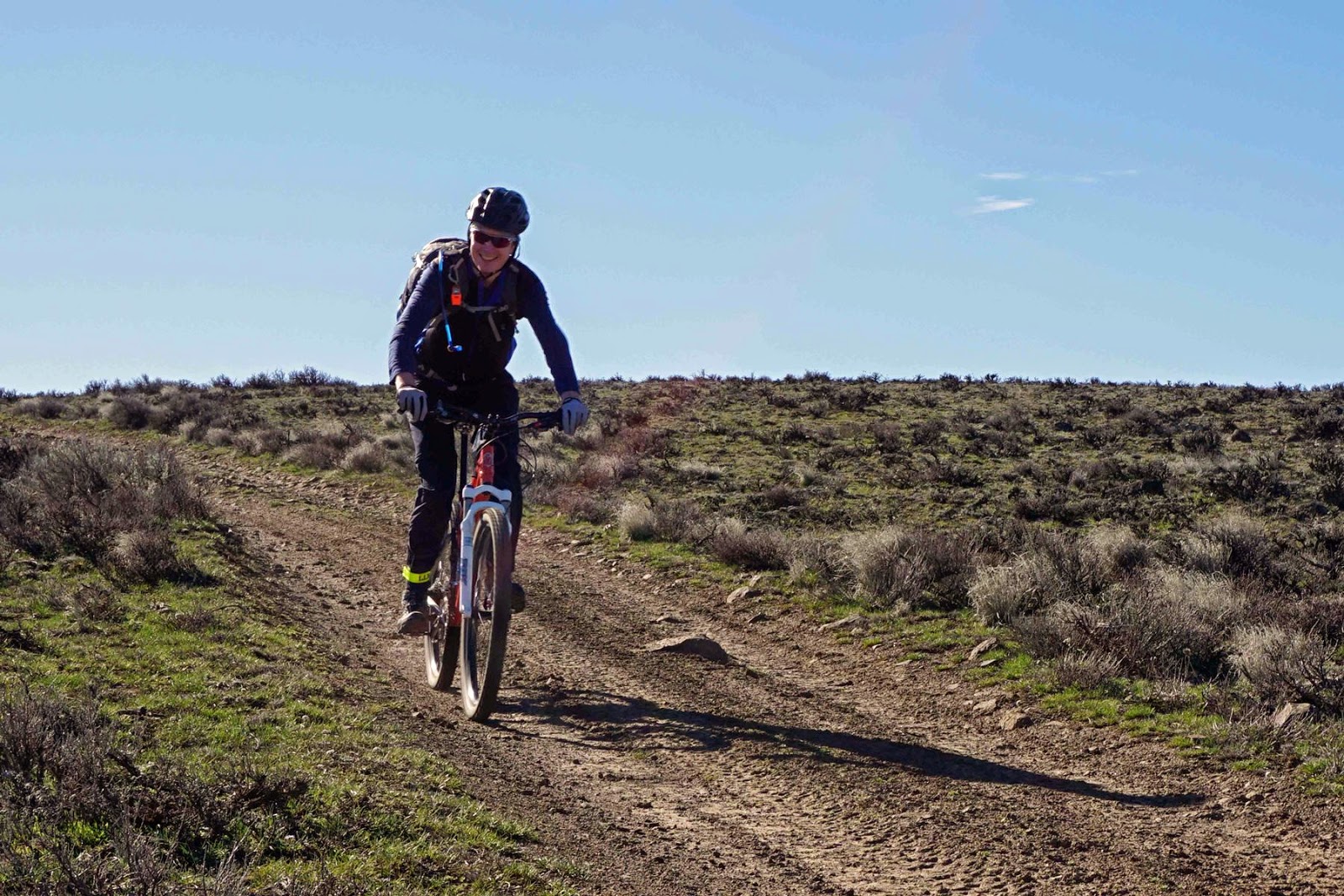 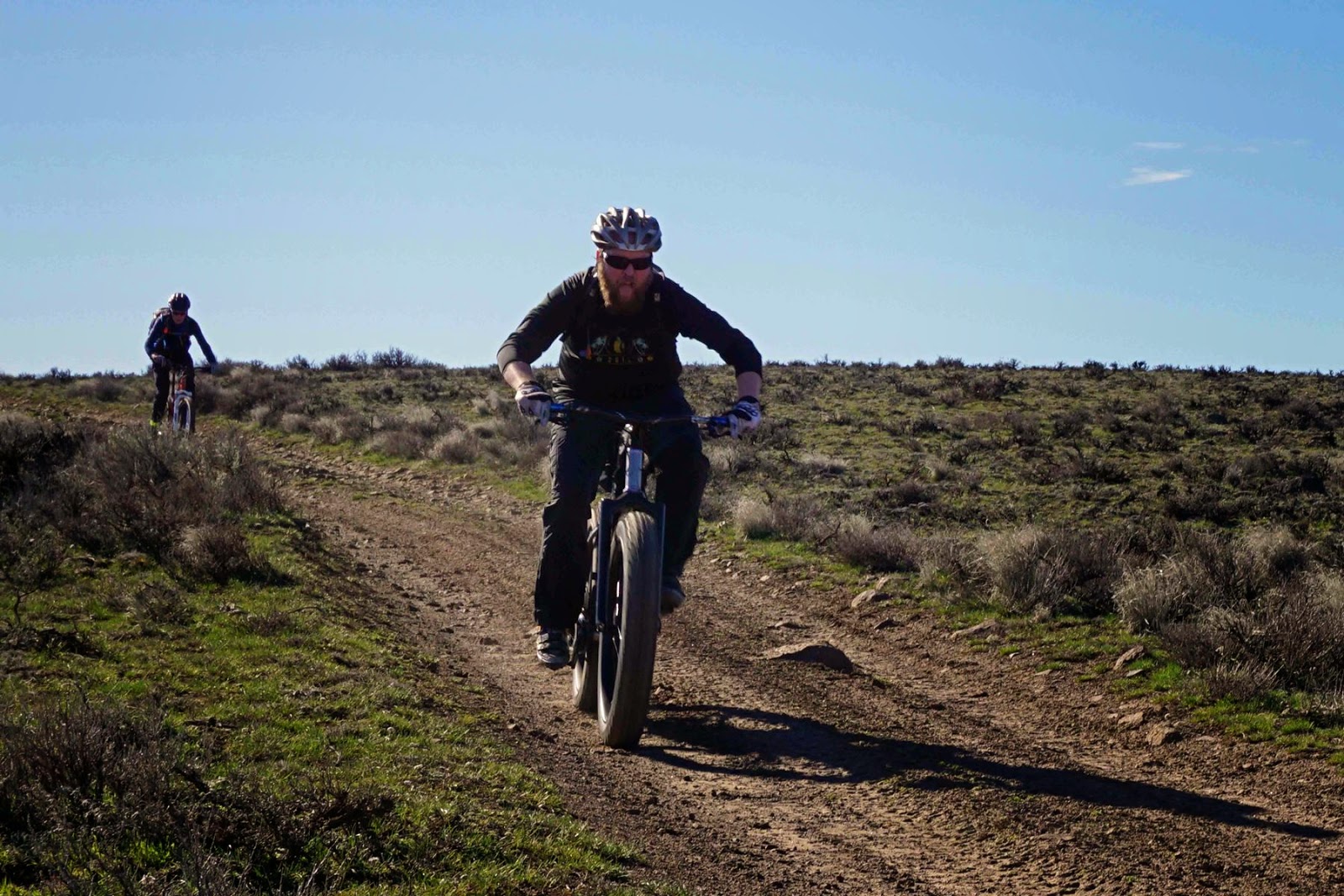 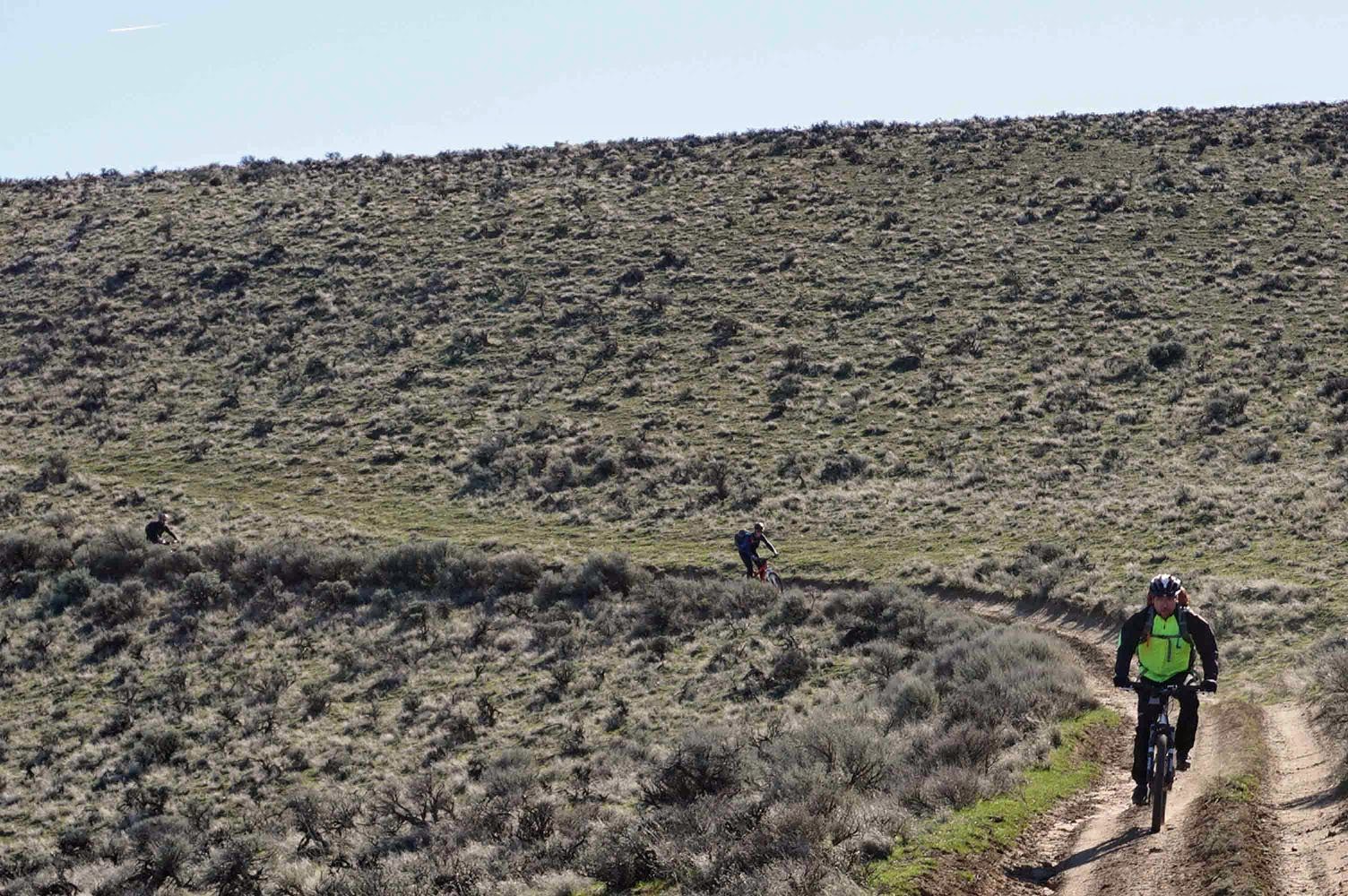 Meanwhile, Ward was killing his brakes.  As bigga place as the Q is, he filled it with the acrid smell of burning brake pads.  If you can believe that.

But while you're sympathizing with his plight, might I temper your sense of sympathy with the knowledge that he was beating the rest of us into submission on every climb, due to his insane level of early season fitness.  Skinny bastard.  Damn mountain goat.  Or in other words, don't feel TOO sorry for him.

The other thing of note, is that he recently drilled out his 100mm rims.  Dang!  That's a thing of beauty.  These are the fatback hundies before anyone even knew what hundies were.  And now they are something incredibly unique.  I think he said it took him something like a week and a half of nights after work to do the drilling and de-burring . . . 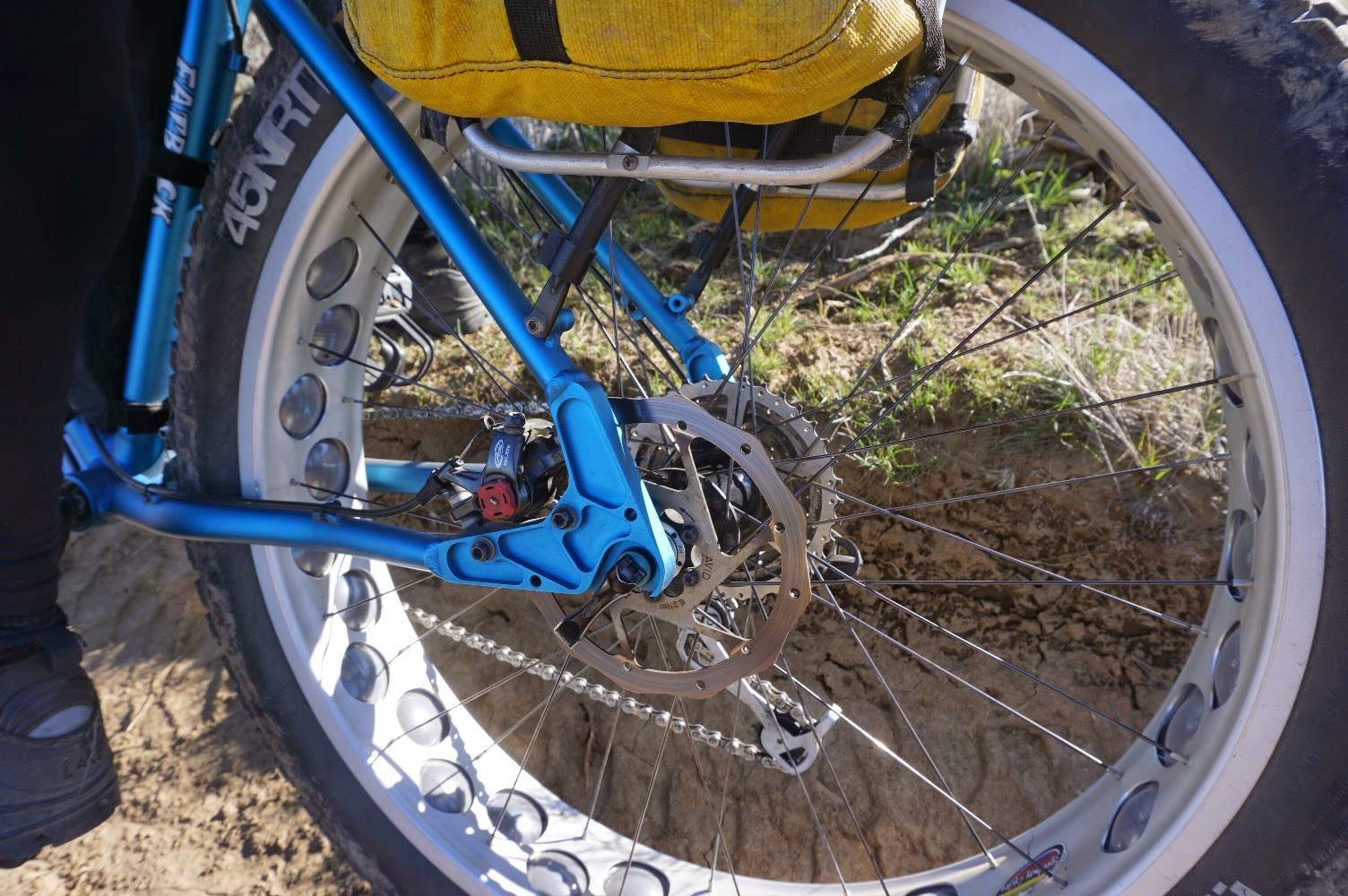 There is no way any amount of photography can come anywhere close to capturing what I love about the Q, but if I had to choose one pic from the day to try and do that, this might be it . . . 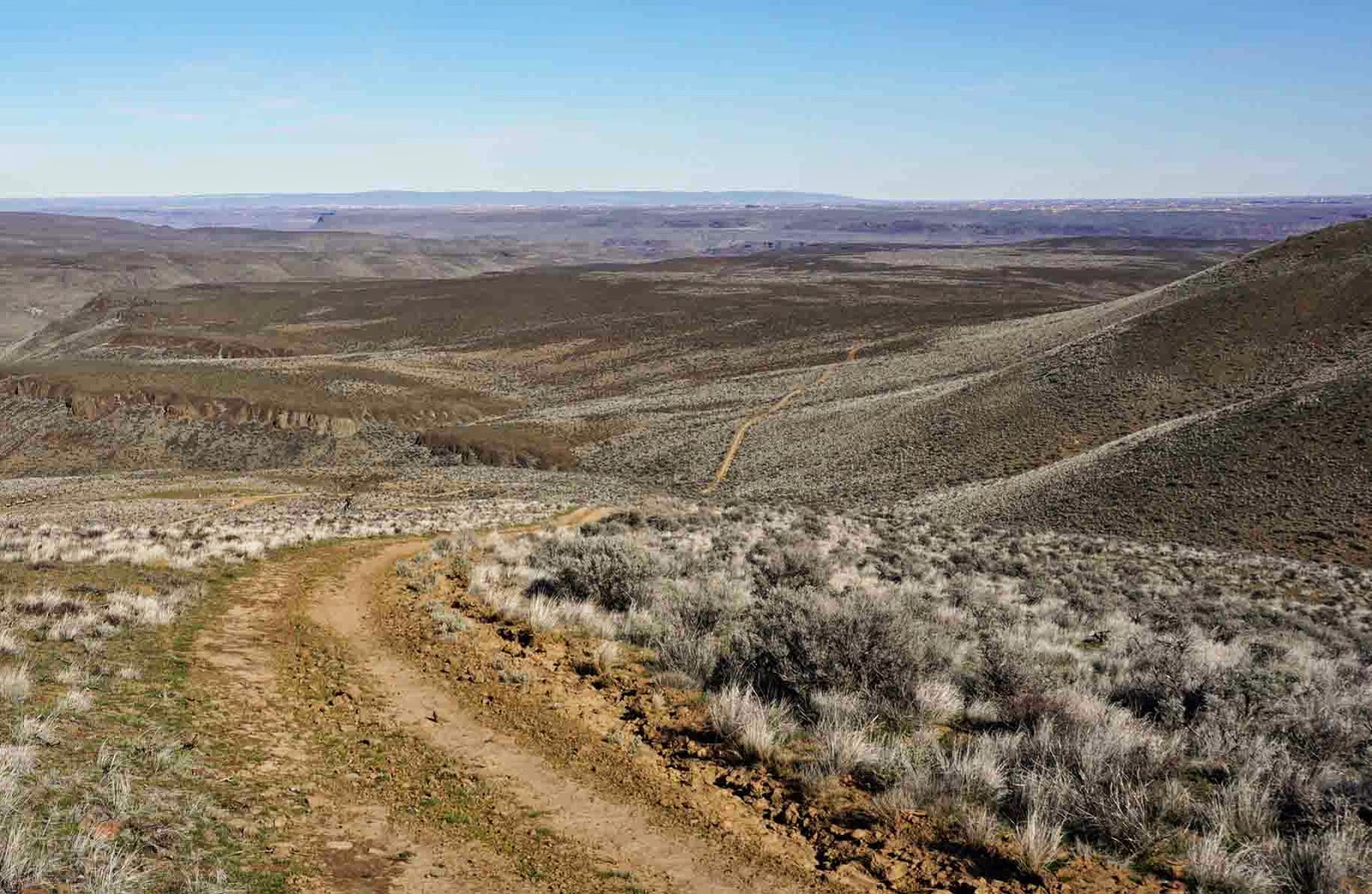 We were co-existing with this outfit for a while, but one whif of Ward's scorched pads and they were "OUTTA HERE", like, ummm, "what's that smell, man??: . . . 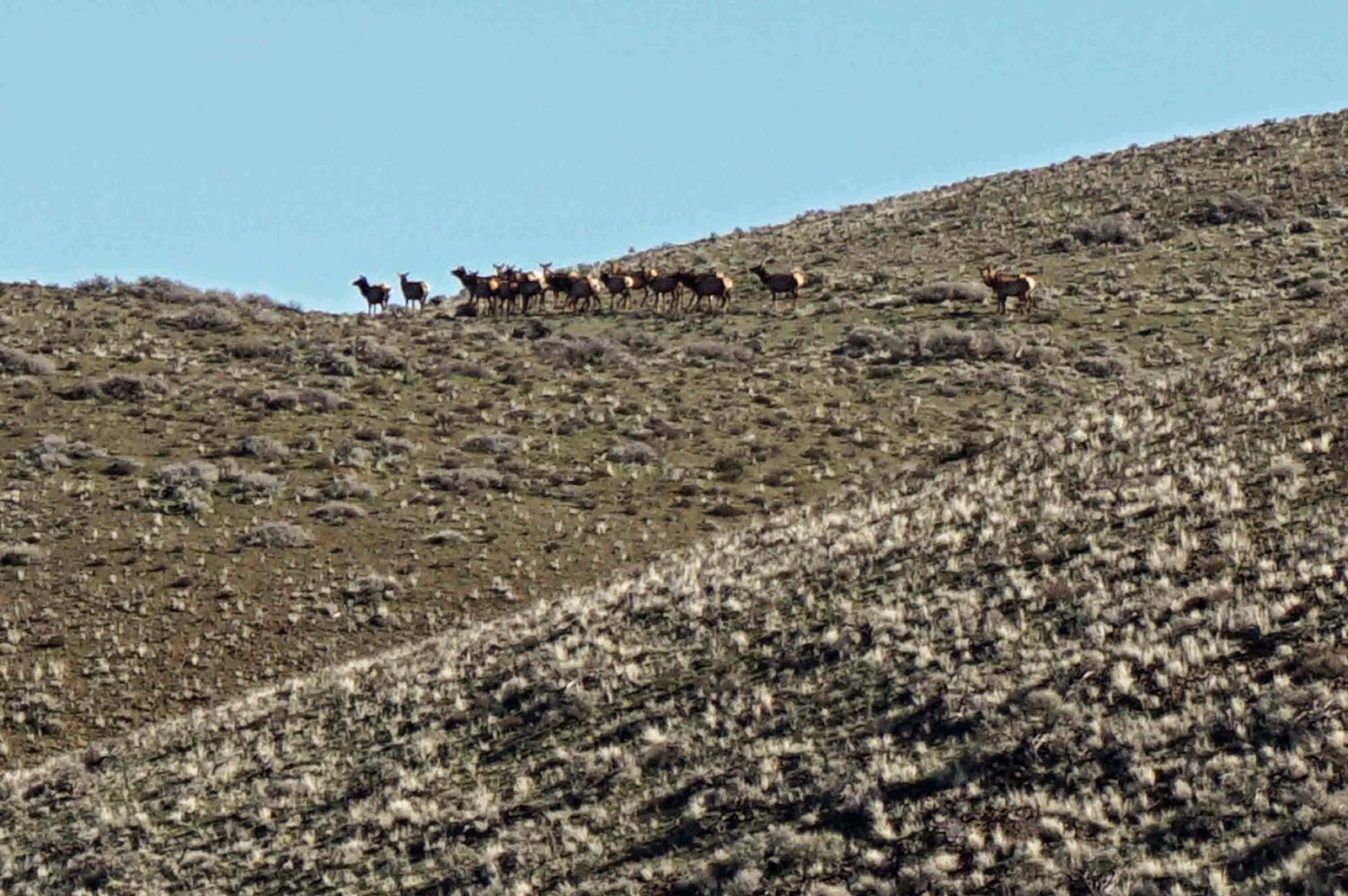 Luckily, on this day when none of us were in any kind of riding shape, we were able to preserve our scarce energy reserves by sticking to the beaten path . . . 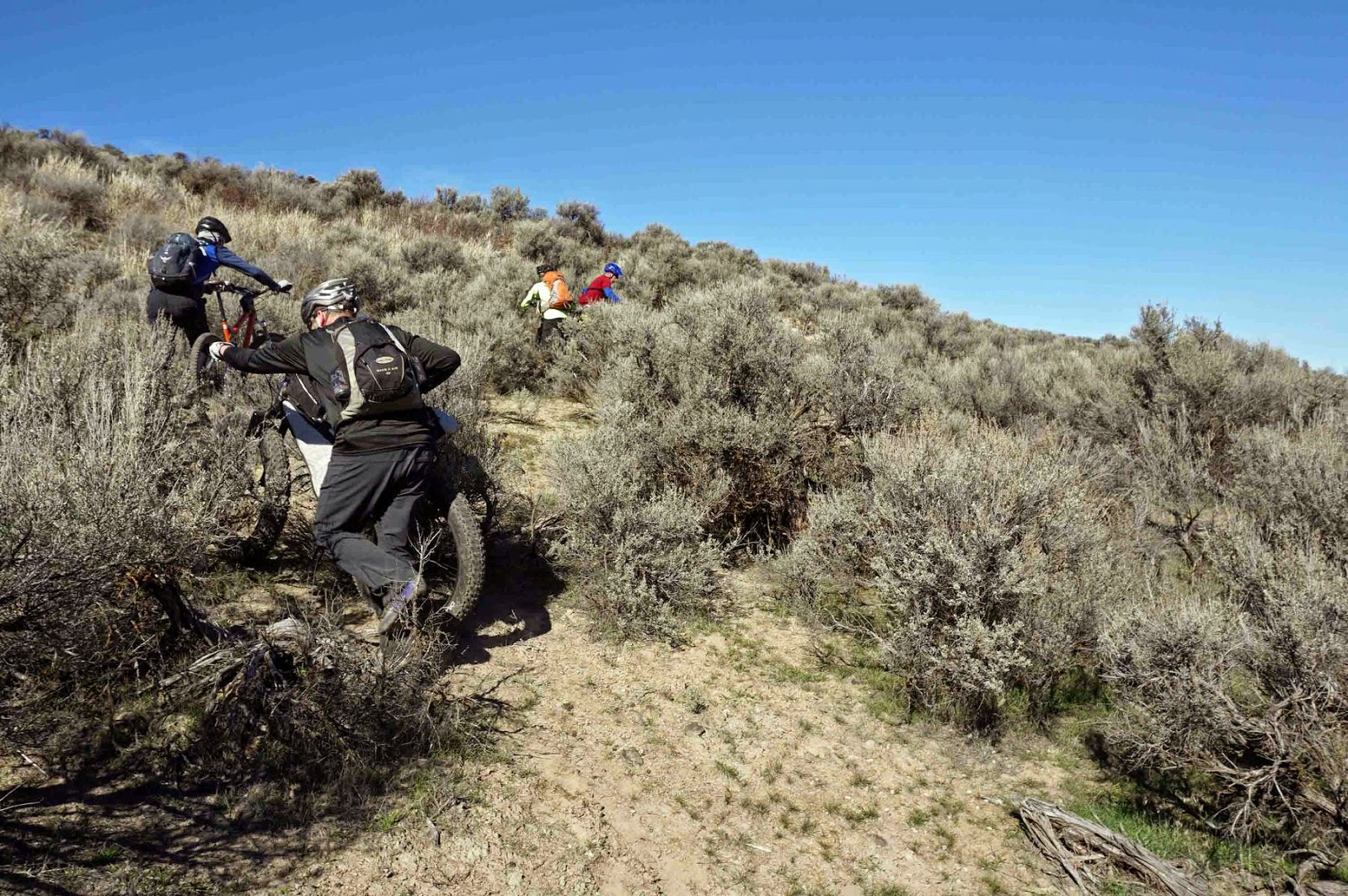 For just one moment, or maybe three, I considered lying down on this luxurious elk-created mattress and going to sleep and quietly dying . . . 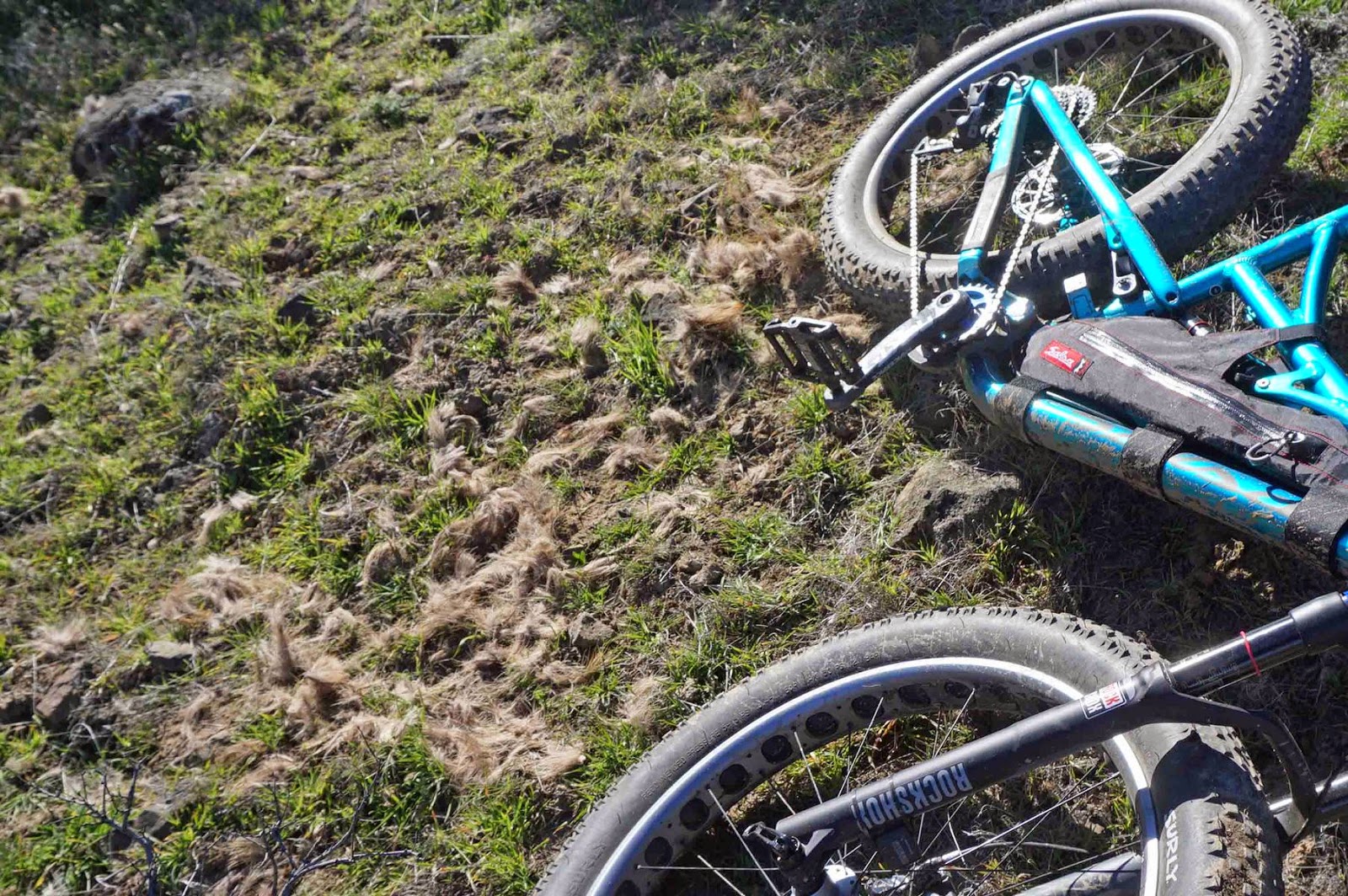 The rad crew.  And let me just pause here for a minute to observe something.  The Q is not for everyone.  Probably there are quite a few people who would try it once and not go back.  And then there are those few who would.  The crazies.  Who would just cancel everything and throw down on short notice because of the promise of a grand adventure that can be packed into one amazing day.  I feel so incredibly privileged to have somehow gotten hooked up with these dudes and landed in the same circle of passion and appreciation for this area . . . 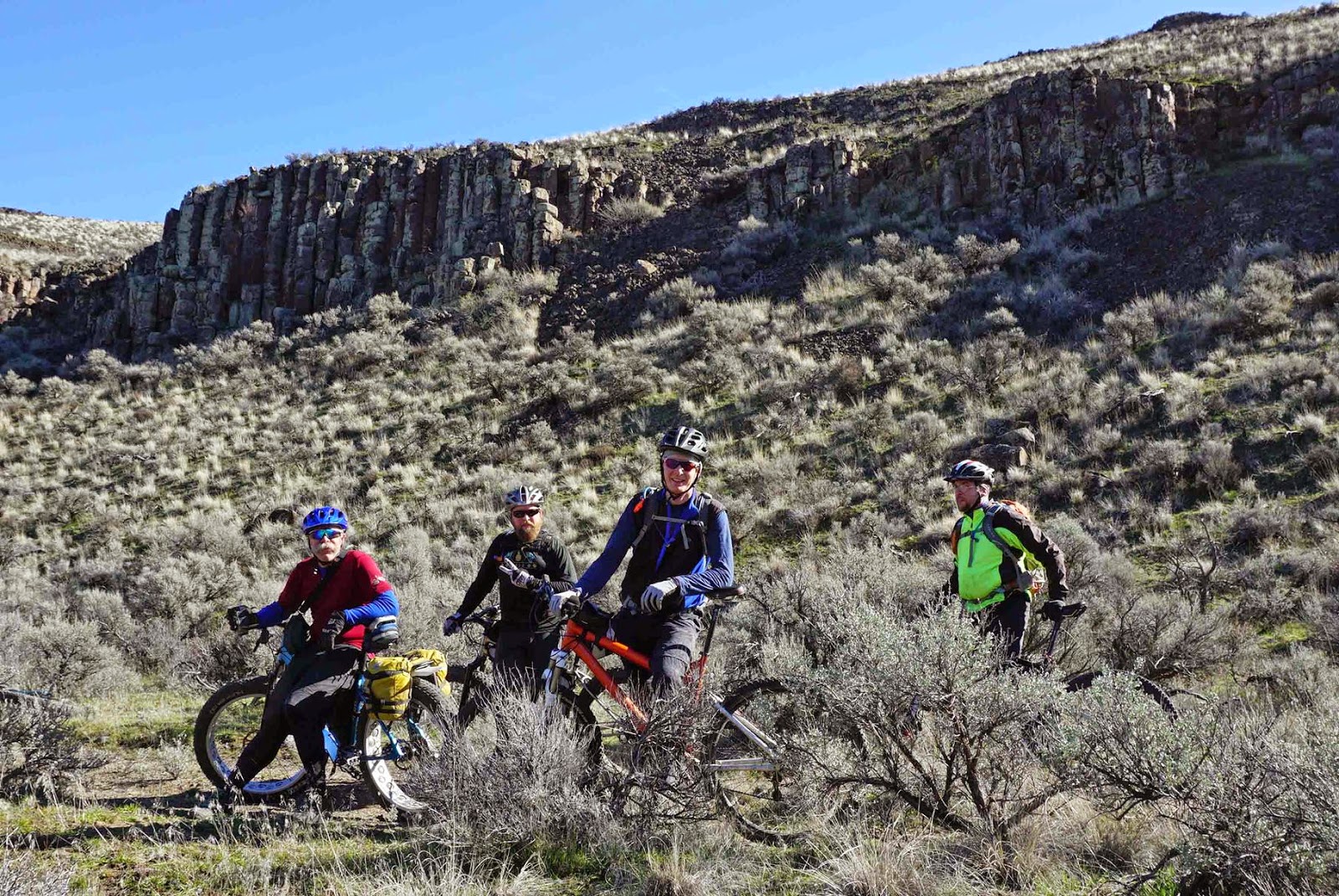 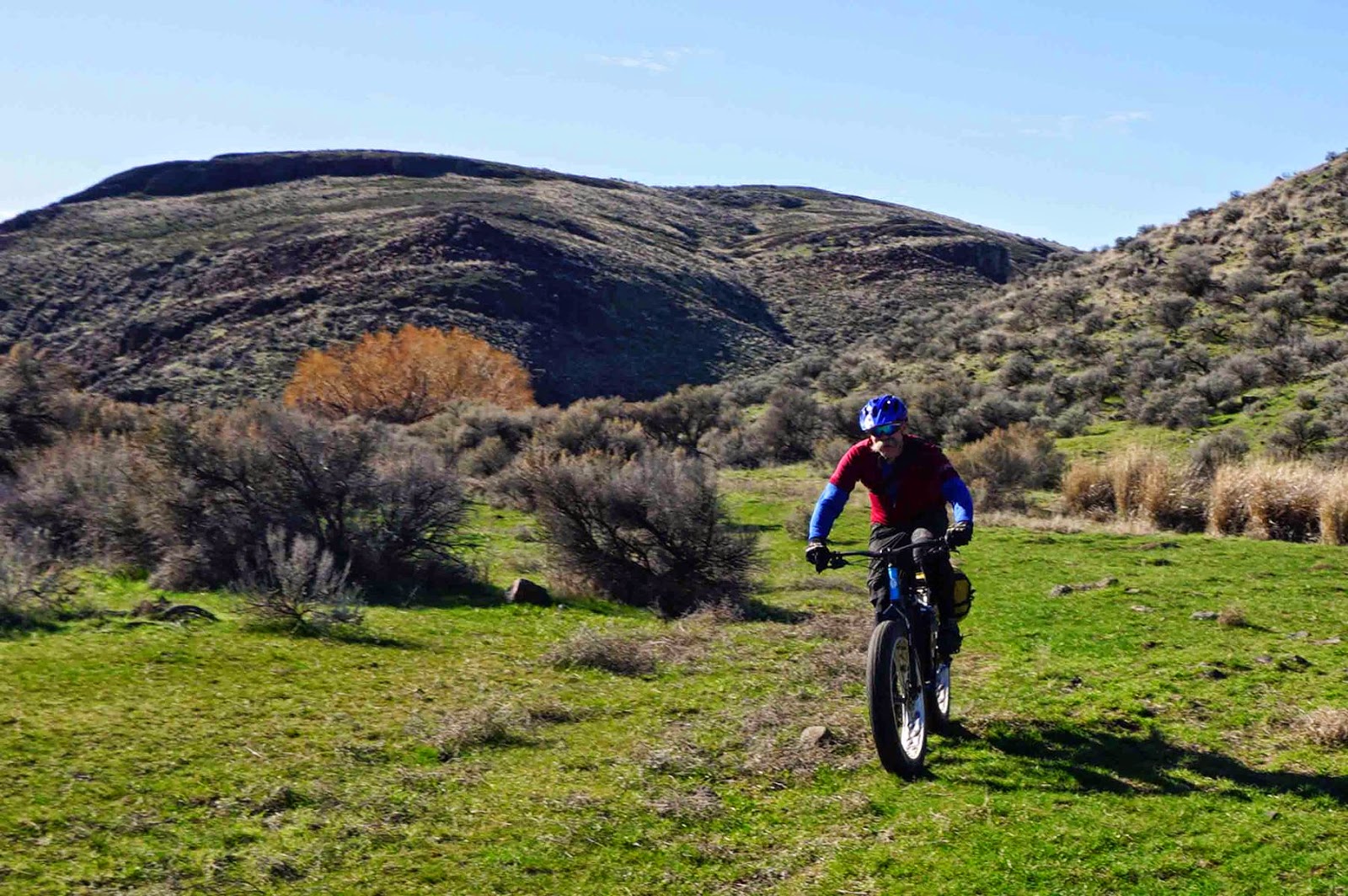 There was a, uhh, slight ulterior motive for this outing.  That being the placing of a beer stash for a possible upcoming overnighter.  Anything worth doing, is worth doing right, of course. 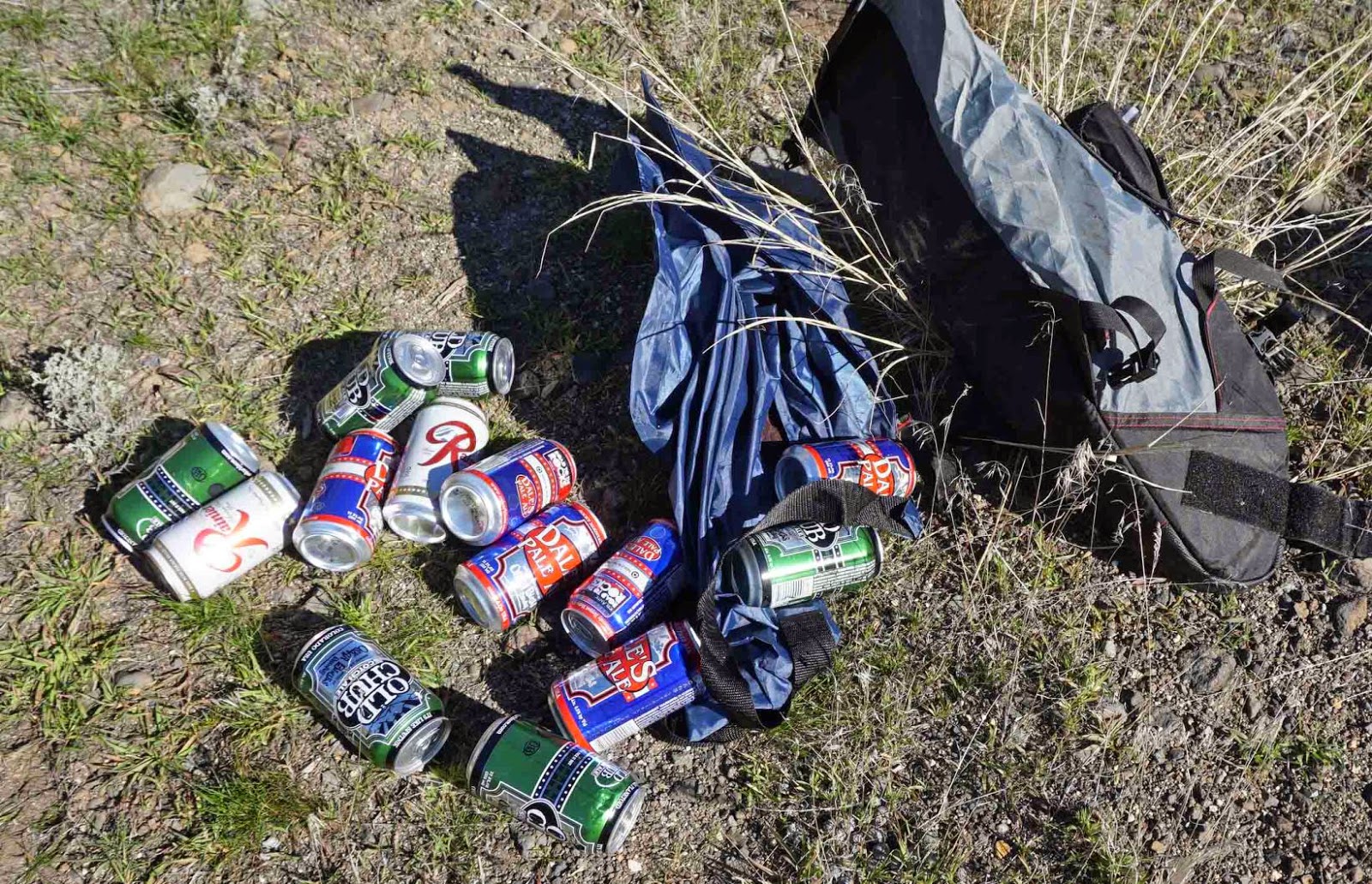 Not all beers were meant to be stashed, though. But I'm sure I don't need to tell you that . . . 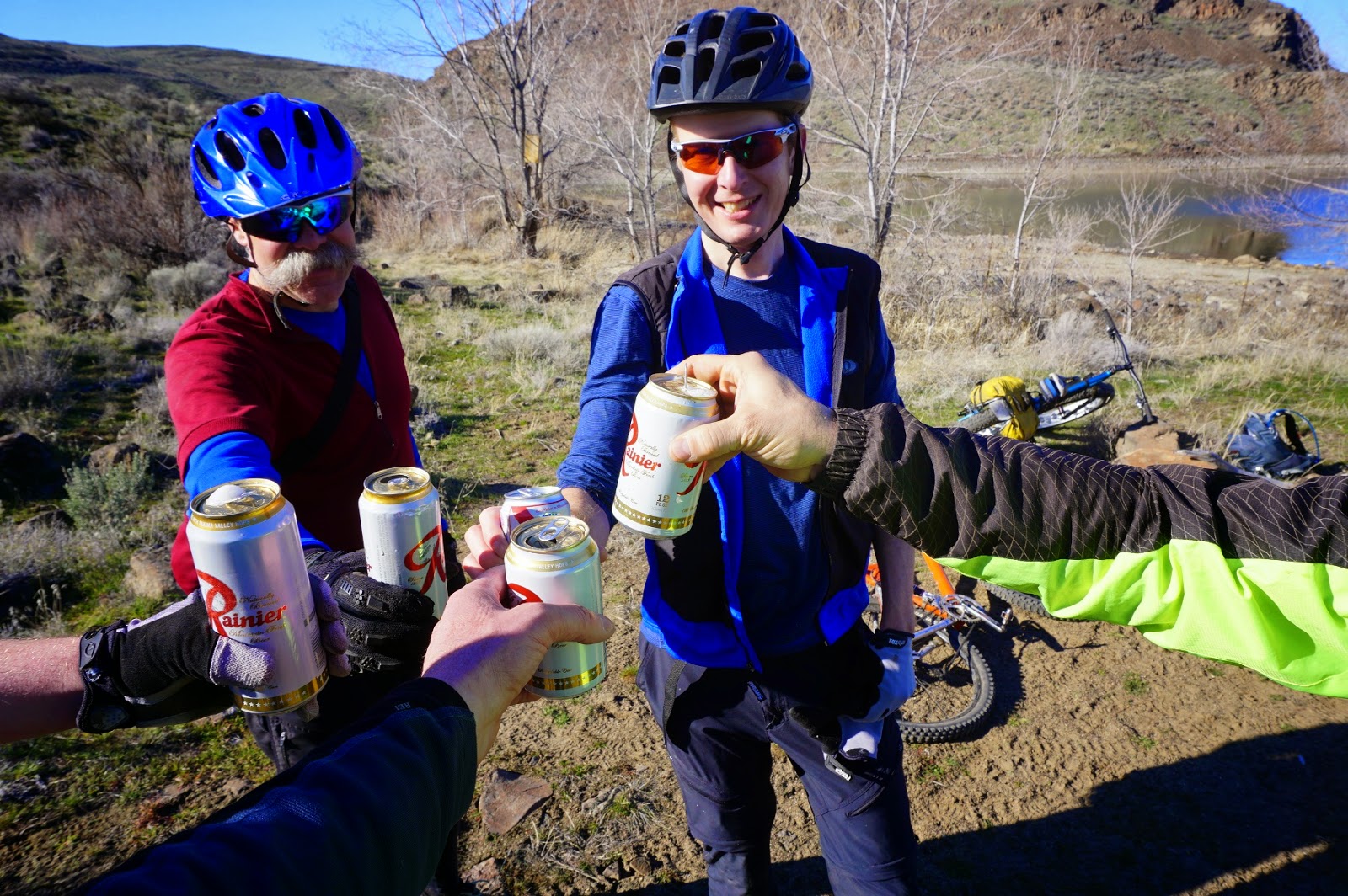 Whiskey Dick Bay.  Yep, the same place where I almost lost my life in a windstorm in '13.  It's too painful to talk about, but a true story, trust me . . . 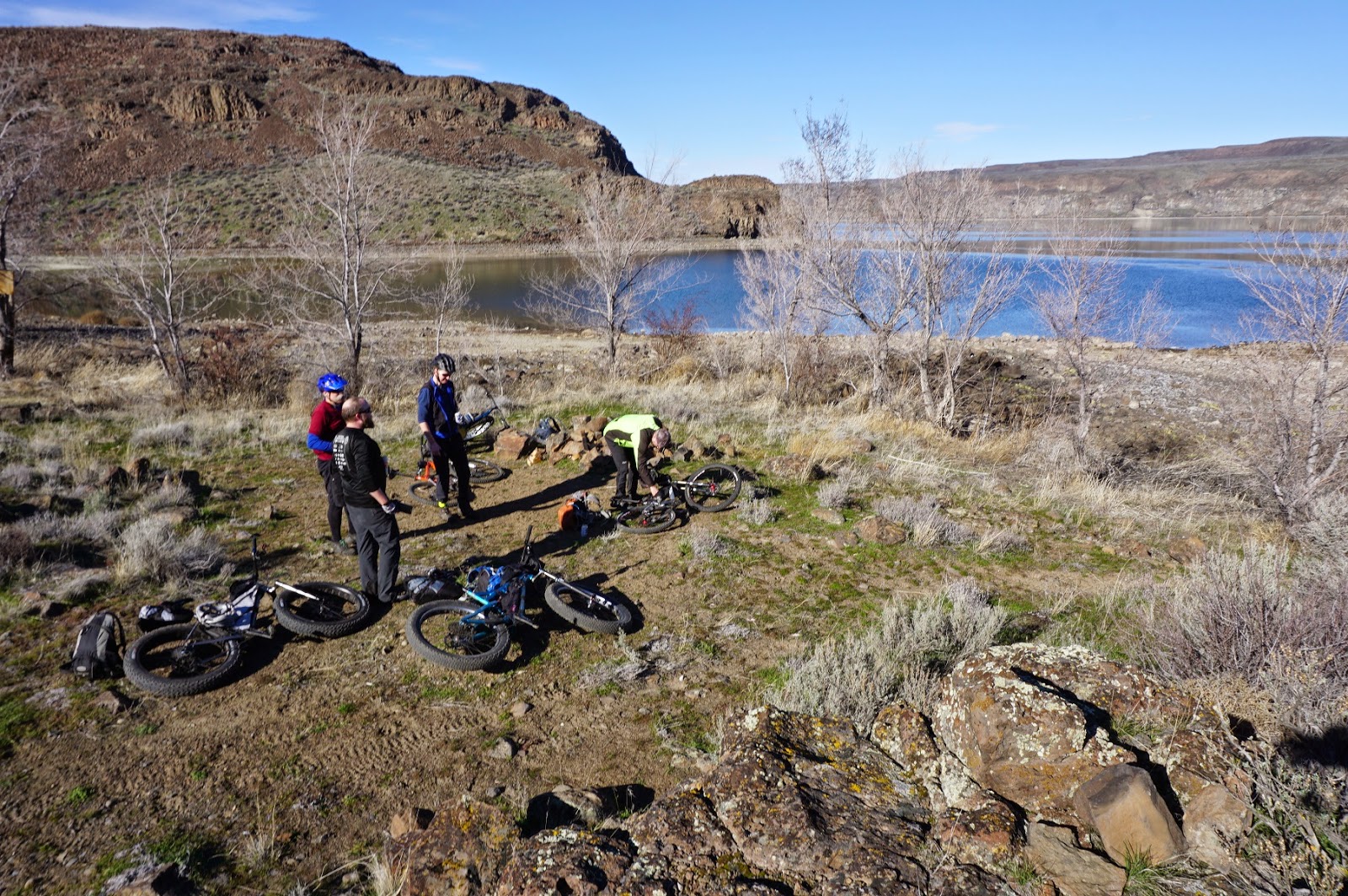 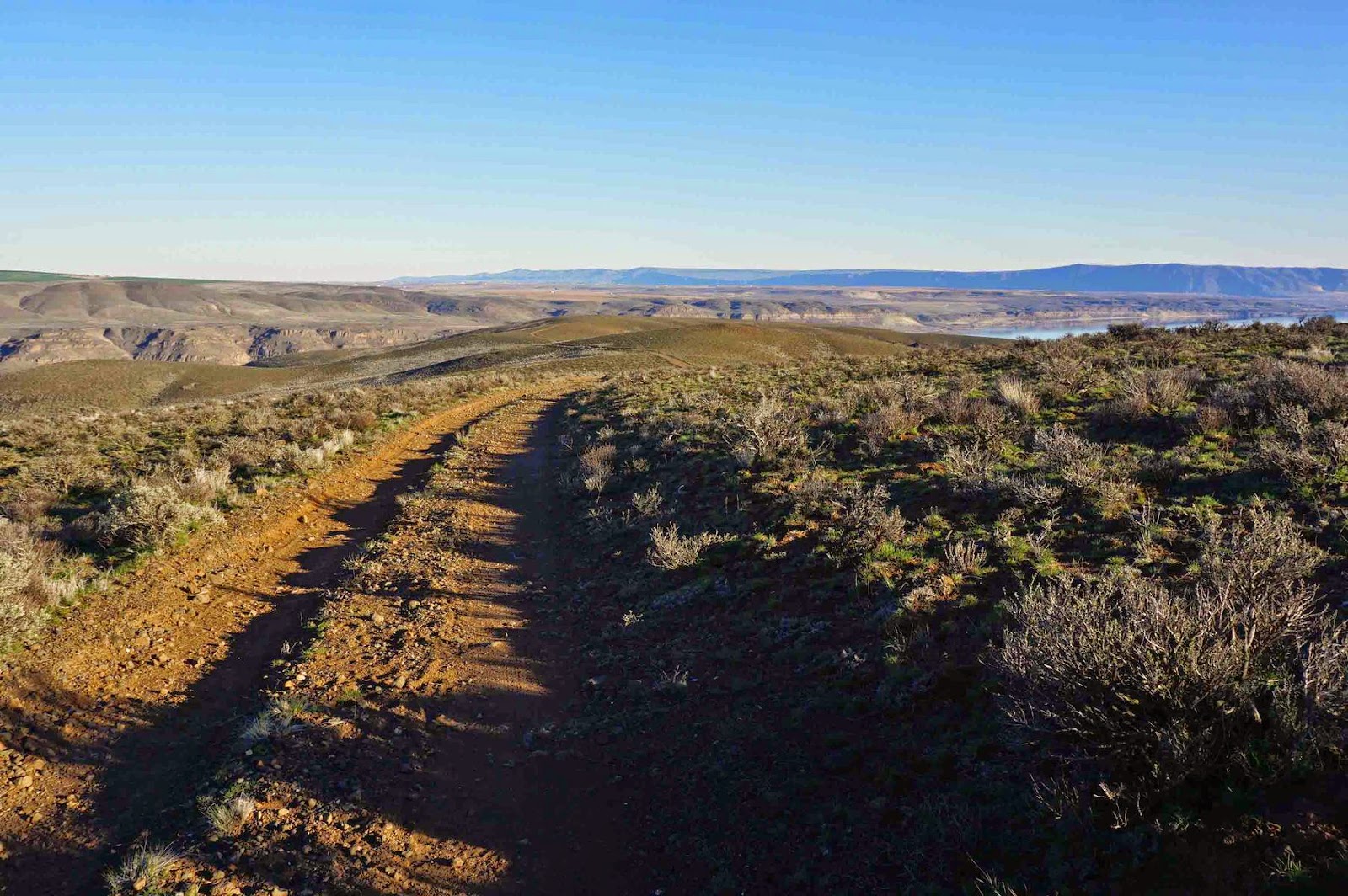 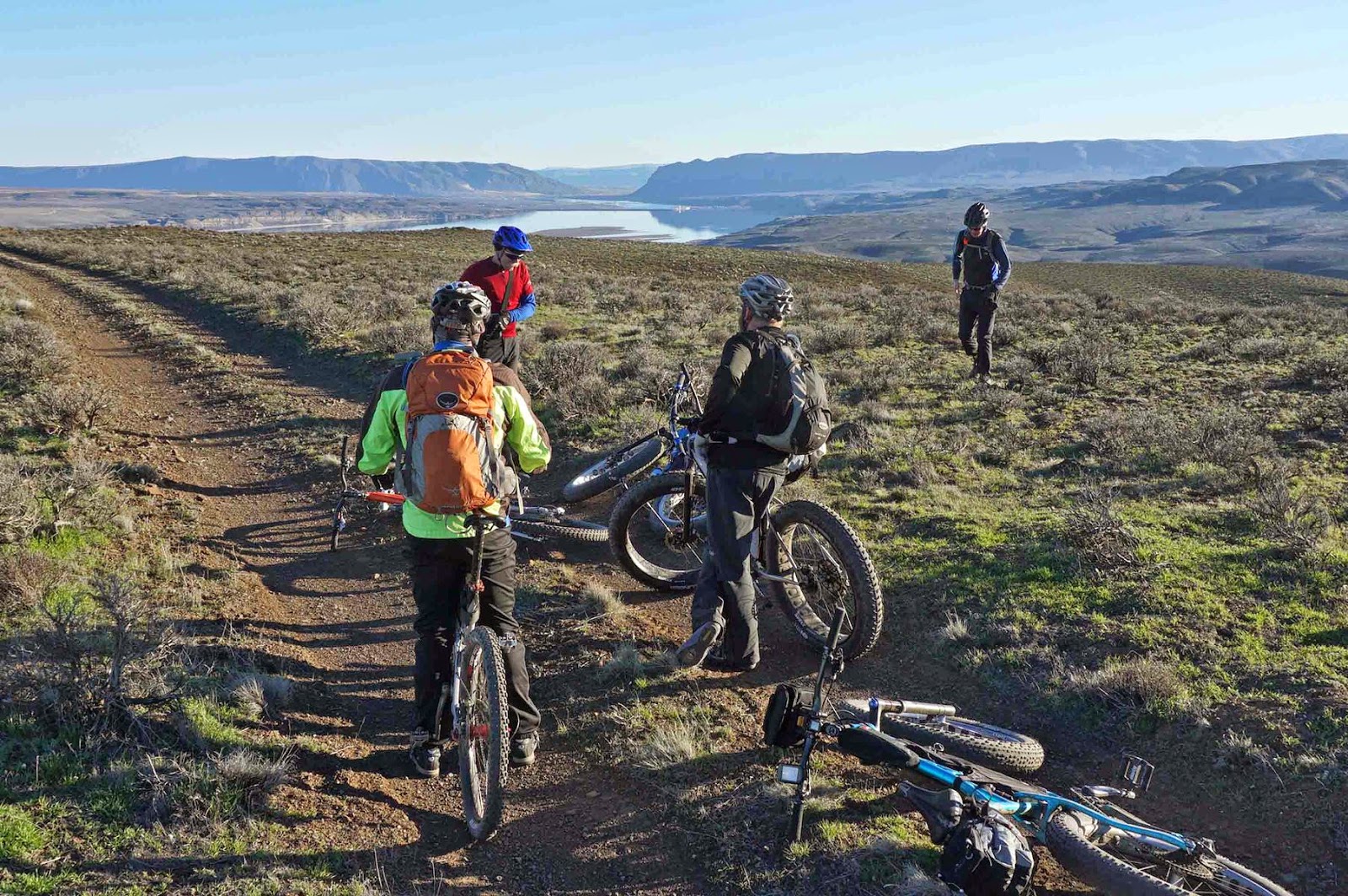 There's been a lot of map activity this winter/spring, whereby Ward got a hold of the Green Trails map folks about a map of this area that used to exist but now didn't, and then they found some old stock in their basement, or something, and Ward snagged a few of them and sent them to a few of his lucky friends, me being one, and then I accidentally scanned one a blew it up on a large scale plotter at work and sent him a few hard copies, and then he took one of those and made it into a canvas print which he gifted me with.  So cool.

And that's Meg on the left, which is Steve's better half, or vice versa, I am not sure.  They are both so cool. 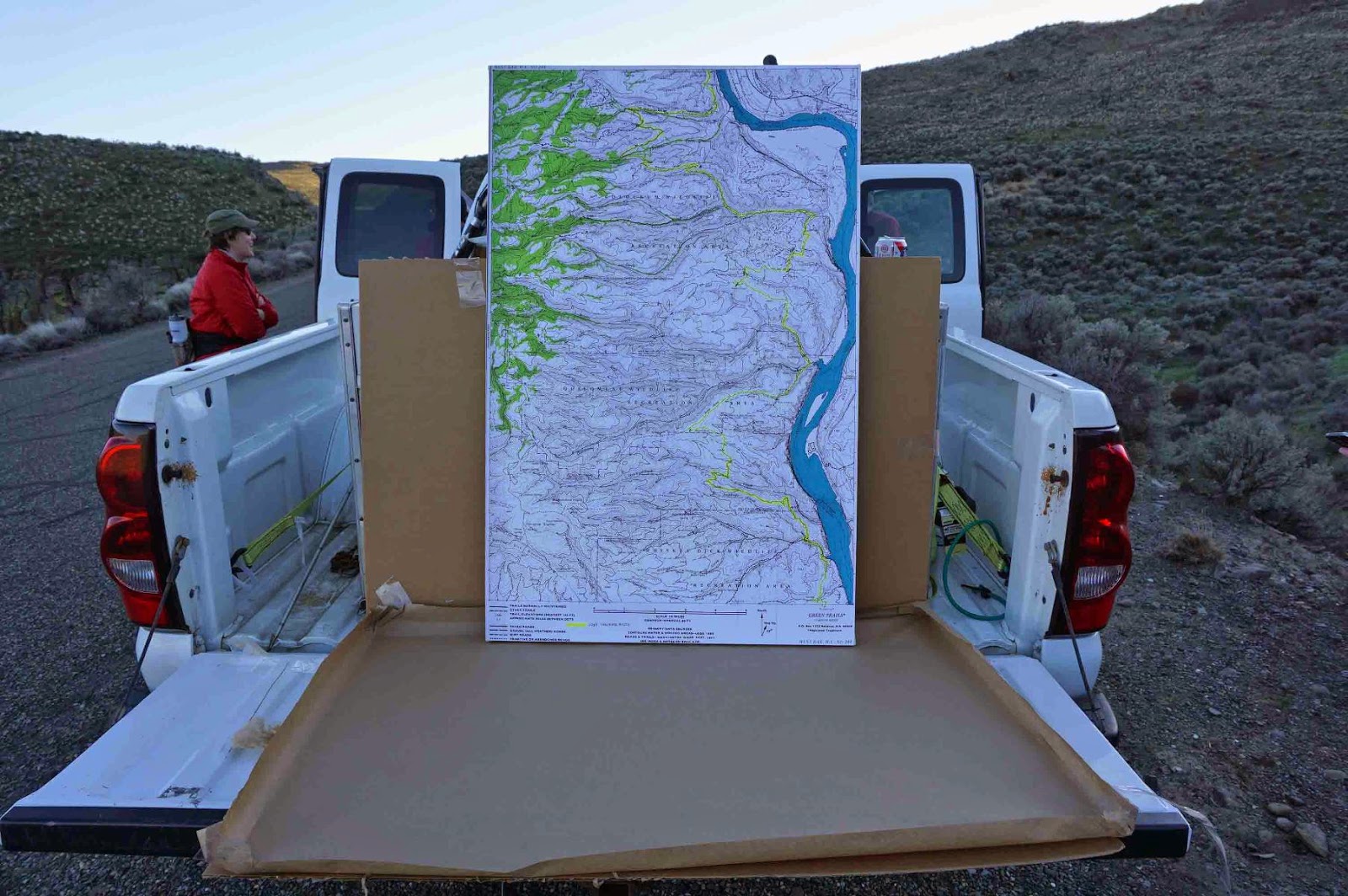 My work week pretty much sucks the life out of me these days and I'm not exactly sure where I summoned the energy to throw down and spend a long, taxing Sunday on this Q adventure, only to show up as a rag doll at work on Monday morning, but wherever it came from, I am so grateful that I was there, in the Q.
Posted by Pat S at 1:07 AM

The bag and camera are working out great, for the most part. The bag is naturally suspended, and then with all the foam inside, I feel really good about the protection from jarring and vibration. Quick access is tops.

Of the minor dislikes, it's seriously fugly. And I don't have any more ability to use it one handed while moving than I did with DSLR. I miss my little P&S for that. The other thing that I totally failed on was the ability to quickly switch out lenses to my zoom lense when we came across the herd of elk. I was carrying the zoom in my backpack and I looked like a total idiot trying to get the backpack off and lenses changed and ended up missing the opportunity. Not sure what the answer is here. Oh, and the other thing about the camera is that the manual is horrible. Unbelievably horrible, which is making learning about the camera a lot more difficult and time consuming than it should be.

Awesome write-up as usual Pat. Randy & I had a conversation the other night about another "recon" into "Q" bay... possibly a Sat./Sun. overnighter. There is an alternate route into/out of the "Q" canyon that I haven't ridden since '95 that we'd like to check out. Will keep you posted.

The smoking brakes says as much about the route pitch as the amount of cargo Ward was carrying... and beating y'all up the hill with... dude's a MACHINE, lol!

Haha... right back at ya Meg! If I remember correctly, you smoked husby, Stan and I last time we climbed up the other side! (She left us in her dust)...

Should be mentioned that I was the last one down ALL of the descents... WAY the last one. And on every descent, the Pat powered Bucksaw came flying by everyone like a KTM...