Well, highly unlikely, I admit, but you have to dream big or you will die. (Or some sappy krap like that, so I have been told.)

The start of '09 has kind of turned me on my head. We pretty much had the year planned out and it involved building a new house. And then the "financial crisis" hit. And I could pretty much go on a 3-day, 750 page rant about that garbage, but this is a bike blog, after all.

And so the idea of building and borrowing and letting it all hang out in this environment started to seem like maybe not such a good idea and even though we hadn't made a firm decision I kind of knew in my mind what was coming and if we weren't going to build then what I would really like to do is spend my time on two wheels and if I was gonna do that I had better get started as soon as possible because it takes time to get in shape and did I mention that what I REALLY want to do this year is race because I'm not that young but I think I could still compete if I could have a little time to train and would be halfway smart about it.

Patty and I have spent a lot of time talking about the decision not to build. I think we're there and I think we're both okay with it. And the last thing I want to do is let the year go by . . . waiting. This is an opportunity - a year, or maybe more, that has opened up . . . a window of time that is ours to live deliberately.

And with her blessing, I started to make racing plans. And I started dieting, because "fat guys don't ride bikes fast". And I shelved my green building books and started lugging around a bike book. 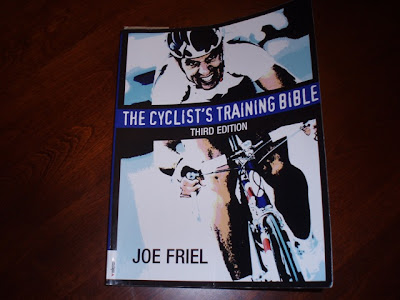 I'm working on my training plan and race schedule. That all takes some thought. But for right now, gratefully, there's not a lot to think about - it's base mile time. That just means getting out and riding and laying off the hammering. I can do that. I'm feeling pretty dialed in to winter riding. Saturday was a Cheney-area 40-miler. 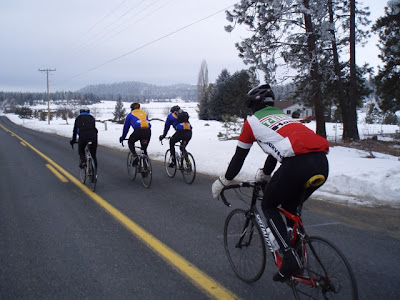 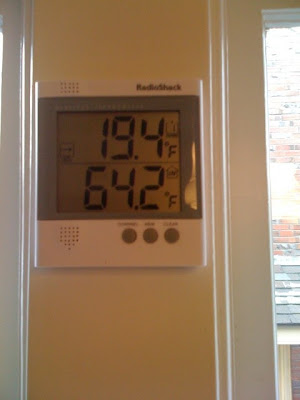 I met Mike at Riverside and Government Way. Having teamates to ride with makes all the difference. 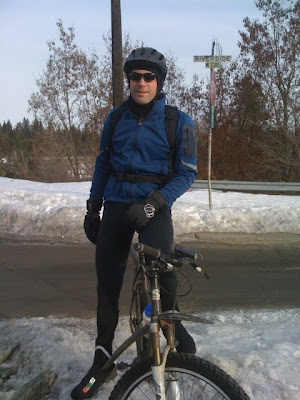 We did a 30-some miler that included Rimrock. 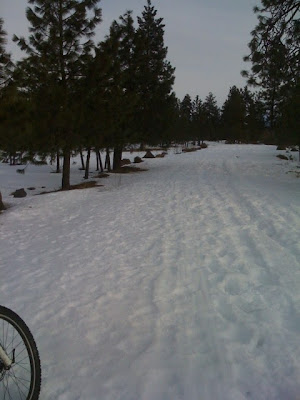 Filthy whoopdee tire tracks were our only friends. 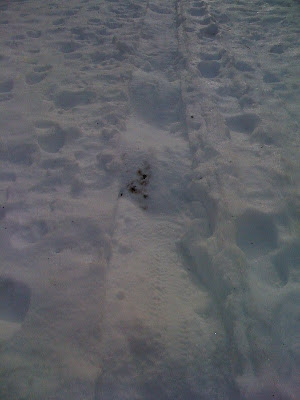 I am ridiculously out of shape and totally excited and suffering like a dog and trying to be patient about my progress and I CANNOT wait for the firt race.
Posted by Pat S at 10:49 PM

It's a bummer you're not building but you have to do what's best. So what kind of racing are you training for?

That will be fun. I was talking to John about trying a couple of criteriums just for the heck of it. I mentioned removing the fenders and rack from my road bike and using that. He said it would be cooler if I won with 'em on. Of course, I think the only way you'll see me at the podium is if I was making a speech and that's even more unlikely. :-)