Winter glove love continues to elude me. And it's not for lack of trying.

All I need is something with 1) a little wind protection, that 2) breathes enough that my hands don't drown in sweat and subsequently freeze, and 3) that I can take off (so that I can, say, take a picture or fiddle with a zipper) and put back on without running myself off the road and/or looking like a total spaz. Is that asking so much???

By far my favorite gloves: 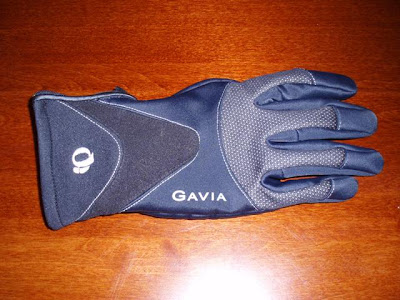 Unfortunately, they draw the line at cool and run from cold. I thought that maybe pogies would solve this problem. Pogies were a worthwhile experiment, but as my friend Jacque put it, "they're kind of like clipping your hands in". (I'm thinking about being glued to my bike in four places as it goes skidding over a cliff. Hmmm.)

Last year I was conned by these (supposed) Pearl Izumi bad boys who were bragging about how they were so all about winter riding: 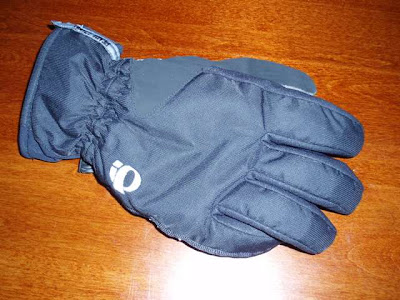 Posers. Turns out they are glorified (a tiny bit of fleece on the thumb for wiping your nose), overpriced ski gloves. They get wet and stick like glue to your hands. And all the dexterity of boxing gloves.

I was excited to run across Planet Bike's Borealis half-lobster gloves. I love that company and was hoping for a miracle. No dice. Not that they aren't a decent glove for the half the money, but they're just like the PI ski glove, except with your ring and pinky fingers webbed and fused. Except that the liner has seperate fingers, which is just stupid. PB, get real. 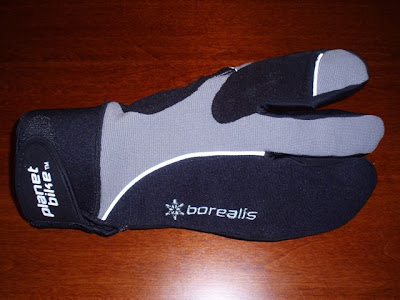 My latest experiment is a wool glove inside a nylon shell. I've read a lot from people who do this and thought it was worth a try. 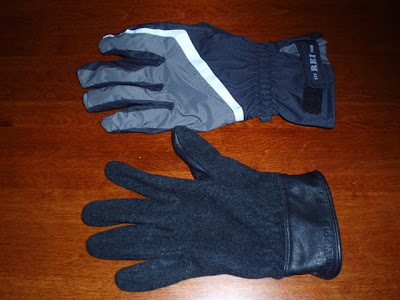 I think fans of this system are mainly people who ride frequently and have trouble drying out thick, heavy gloves from day to day - they are able to dry the wool gove separately from the shell. On today's ride I was delighted to discover that I now had to remove and store (somewhere, while moving) not only one, but two gloves, to perform even the most simple task. I am an idiot.

Technology will eventually save me. I'm just not sure when.

If it's not too cold--for me that means above freezing--I find that running gloves work pretty well. The wind chill and humidity are a factor but for the most part I find them adequate. When it's colder I bite the bullet and go with the ski gloves.

I hope you write Planet Bike about that liner. Maybe they'll listen.

I hope you post the holy grail when you find it. I think you need different gloves for each range of temps and conditions. I rode in PI lobster claws this morning, which worked good until after breakfast, then the sweat came. I swapped into the REI fleece glove/mitts at the Scoop, which are great for 35+ or hard riding, but not enough for 32- or mid30s with rain. If that makes sense. I don't think there is a holy grail actually.

Call me crazy (or cheap, or poor), but I have some thin polar fleece mittens and wear some inexpensive running gloves from REI inside. If it's too hot the mittens come off and the gloves work well. I have yet to get too cold and have been in some pretty cold stuff. Haven't gotten them wet though.

At some point you have to switch to mittens. For me it is below 15 degrees. I use REI's Liberty Ridge gloves, which kept me warm down to -2. They are stiff and bulky for cycling, and eventually get damp inside, but better than frozen hands. There are probably better mittens out there, especially for $90.

Gloves, gloves, gloves. tried every combo or glove out there and there is no one answer. PI amfib lobsters are the warmest most water resistant. Craft makes excellent range of warmths but their XL is too small for my hands. Patagonia thin poly liners add a few degrees to any glove. Carrying a buffet line of gloves is no fun, but water is the biggest enemy.