This had to have been designed by a blind-since-birth inventor who had the form of the common bicycle grossly inadequately described to him.  Or by someone who was willing to bet their rack-building career on the conviction that bikes in the near future would be getting super skinny. Or something along these lines, I'm not exactly sure. Don Quixote on acid?  Is the "handle" so that you can pick up your 10-pack of bikes? Or maybe I'm totally missing something and doing it all wrong? 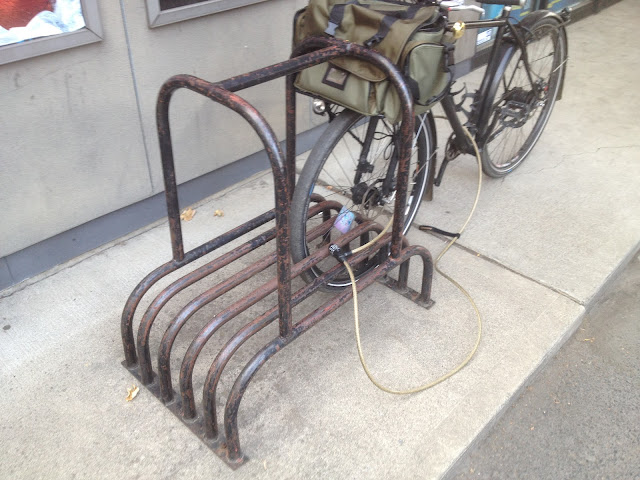 It's totally endearing in it's wackiness, though. On the very rare occasion that I ride my bike to and park it at the Conoco station at 29th and Grand, hitching my steed up to this post is a treat. Somewhere out there is someone who didn't get the memo that they were supposed to be marching to the tune of a drummer, let alone a specific drummer, and ended up marching to the tune of a piccolo player instead. I salute you, sir.
Posted by Pat S at 11:17 PM

From what I've seen, it would be possible to dedicate an entire blog to dysfunctional bike racks. In any case, it's nice to see your Karate Monkey make an appearance again. Nice bike.