I had ambitious plans for this day, with even more ambitions about how to integrate my new bike into what needed to get done.

First off, I was supposed to get up early and get out to Loon Lake, where my family has a cabin, and pull the family boat out of the water. This is an annual drill (actually there are two of them - putting it in at the beginning of summer and pulling it out at the end) that involves driving the boat from the cabin, at one end of the lake, to the the public launch, at the other, and pulling it out with your truck and trailer.  Thing is, it's a major challenge to drive the boat and the truck down there at the same time. So it usually involves rounding up someone else to go with you and drive the truck and/or boat while you drive the other, and people have schedules and lots of stuff to do and it's just a hassle to organize.  So I figured out a few years back that it's just way easier to do the gig with your other buddy - your bike. 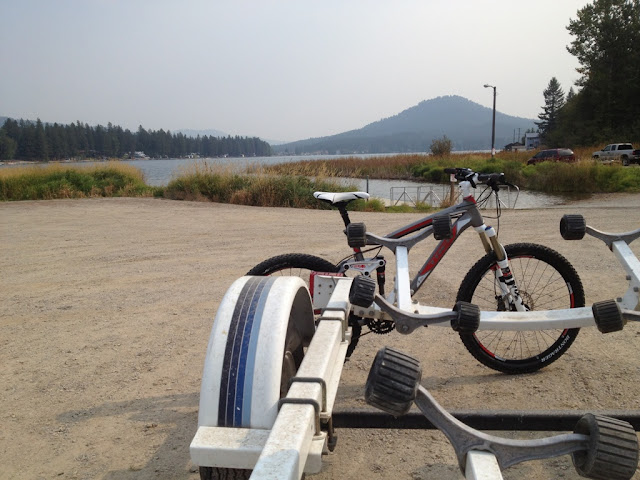 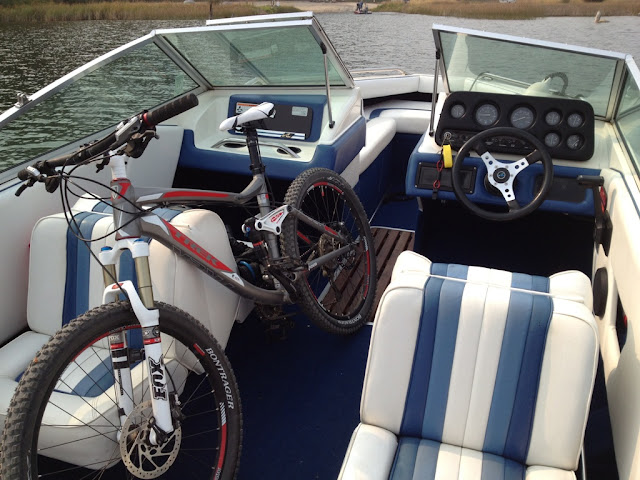 So all that's fine and well and you'd think that by now I'd know that it takes more than a coupla hours, but true to my nature I was once again overly-optimistic and figured that I could get out and do the job and then get back to town and ride said bike off-road out to 7-mile in time to catch some of the Men 4-5 and all of the M/W 1-2-3 cyclocross races at Riverside.

What I failed to account for is that the ride from the launch to the cabin is not flat, because lakes don't form on flat surfaces. Just sayin'. And I knew this, but still, I over-optimized. And then I was in a hurry, so I pushed it. Which left me with a less-than-ideal amount of gas in the tank when I got back to Spo. But still, I was determined to hit every damn trail on my rad new singletrack-eating machine on the way out to 7-mile, starting with the bluff.

Heh. That particular rocky section at the top of the bluff trails, just below 25th, that launched me over the bars and landed me on my head last time I rode it, thereby cleaning my clock?  Look who's cleaning who now! YOW!!!

Mathematics is/are cruel, and by the time I got back to Spo, there was no doubt that making it out in time for the M/4-5 race was out of the question. But I had great optimism that I could make it in time for most, if not all, of the M/W 1-2-3 race. It's a 55 minute-long-race, so that's a huge window to fit, if not fall, through.

Boy, is it a long way out to 7-mile on the trails. At some point, I realized that my only hope was to get off the dirt and onto the paved CT.  And that's when things got even sloggier. The stock tires don't roll so well on tarmac. As well they should not.

Yay for me. Plan and execute. I arrived just in time for the race to have already ended. The only thing funner than the ride out was the I'm-now-totally-wasted ride back. 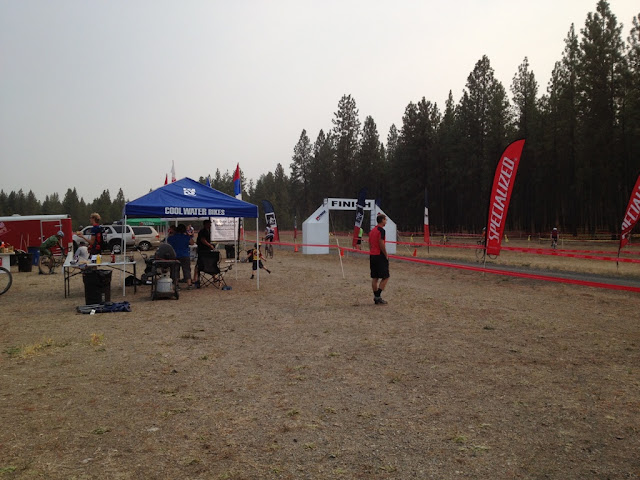 All is not lost, though.  The good that came out of all of this, and honestly the major point of it all, is that I spent a bunch of time aboard my new ride. While I don't yet know it well, I am certainly getting to know it. And it continues to be a pleasure to make it's acquaintance.

With that, I conclude my spontaneous, makes-no-sense, "Days Of The Week" mini-series. There will be no post titled 'Monday'. It's over, as it should be.

The pictures here are kind of really lame, I know. Hey, I was busy riding. I did stop on the way back and take some senior pictures for an upcoming post about the bike, so I guess if you read between the lines, what you might hear me saying is that I'm not happy about this and I'll try to do better. 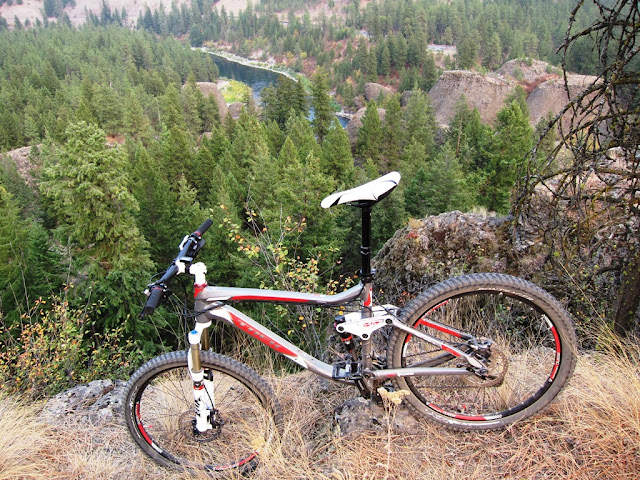 Hope you had a good weekend. Now get your ass back to work.
Posted by Pat S at 10:12 PM

That's a nice looking boat, as well as bike. Seeing your bike loaded up, I can't help but think of potential boat/bike opportunities for you come next summer.

Andy, there's a lake nearby (Lake Roosevelt behind Grand Coulee Dam) that has hundreds of miles of shoreline, most of it public access, with lots of sandy, marshy fatbike ride-able sections. I think it would be ideal for a bike-boat camping trip destination. Maybe someday.

I hate when I wake up after the weekend to find an empty underwear drawer and "Monday" still in the wash.

Get professional trading signals delivered to your cell phone daily.