Of Apples And Cheap Bikes

The four following pics from John's Fruit Foraging SOS this morning.  John and Justin hauled back bushels of wild, public-access apples, which they will process in different ways.  I have no such intentions.  I brought back exactly six, which is the amount that seems about right for immediate consumption.  I don't know about Justin, but there is some 24-hour apple butter reducing going on on John's stovetop at this very moment, and I tasted an early tester of the applesauce this afternoon, which was pretty awesome.  Serious pressure may come to bear on Liza, regarding a pie.  The whole thing is quite rad. 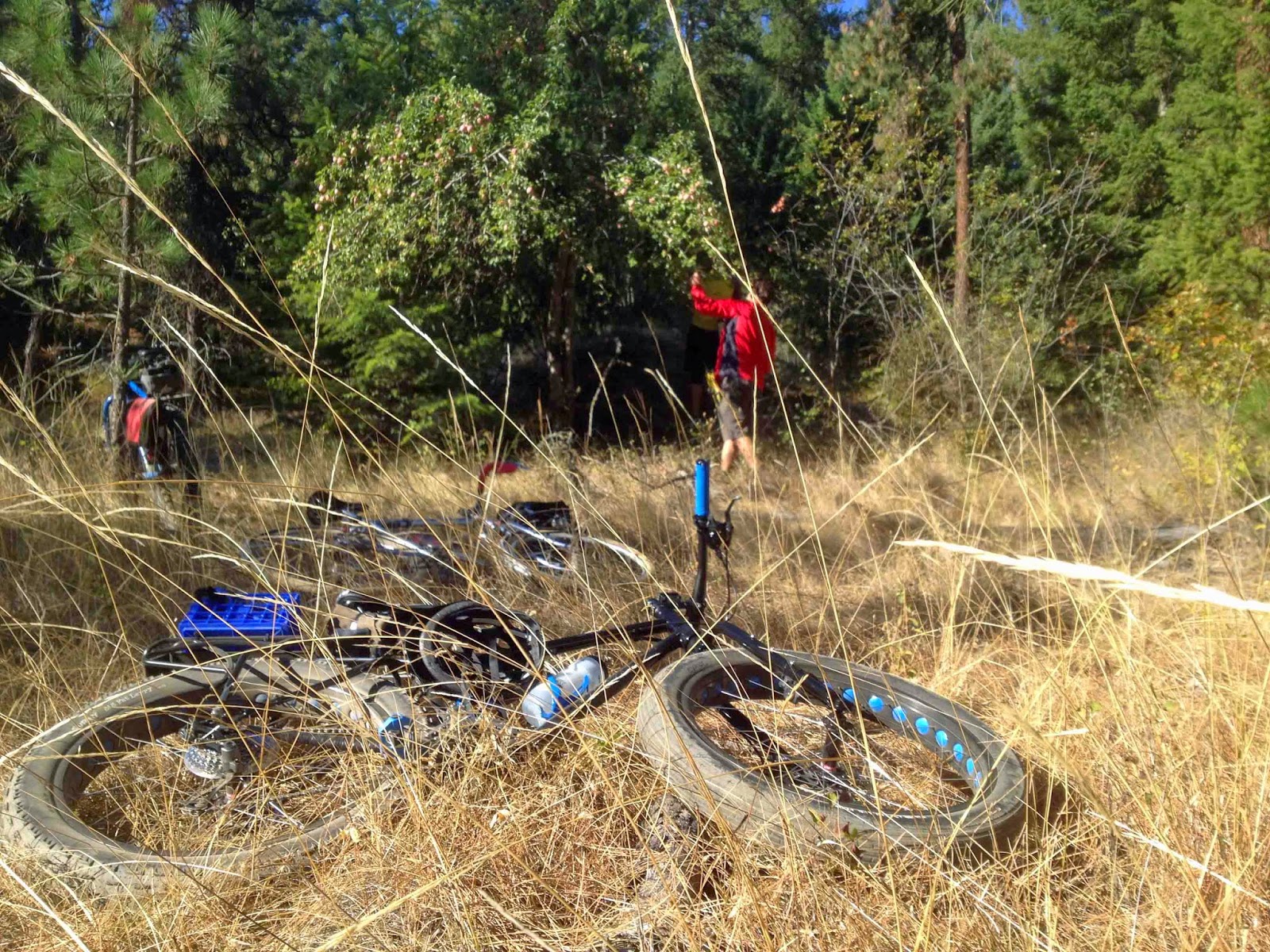 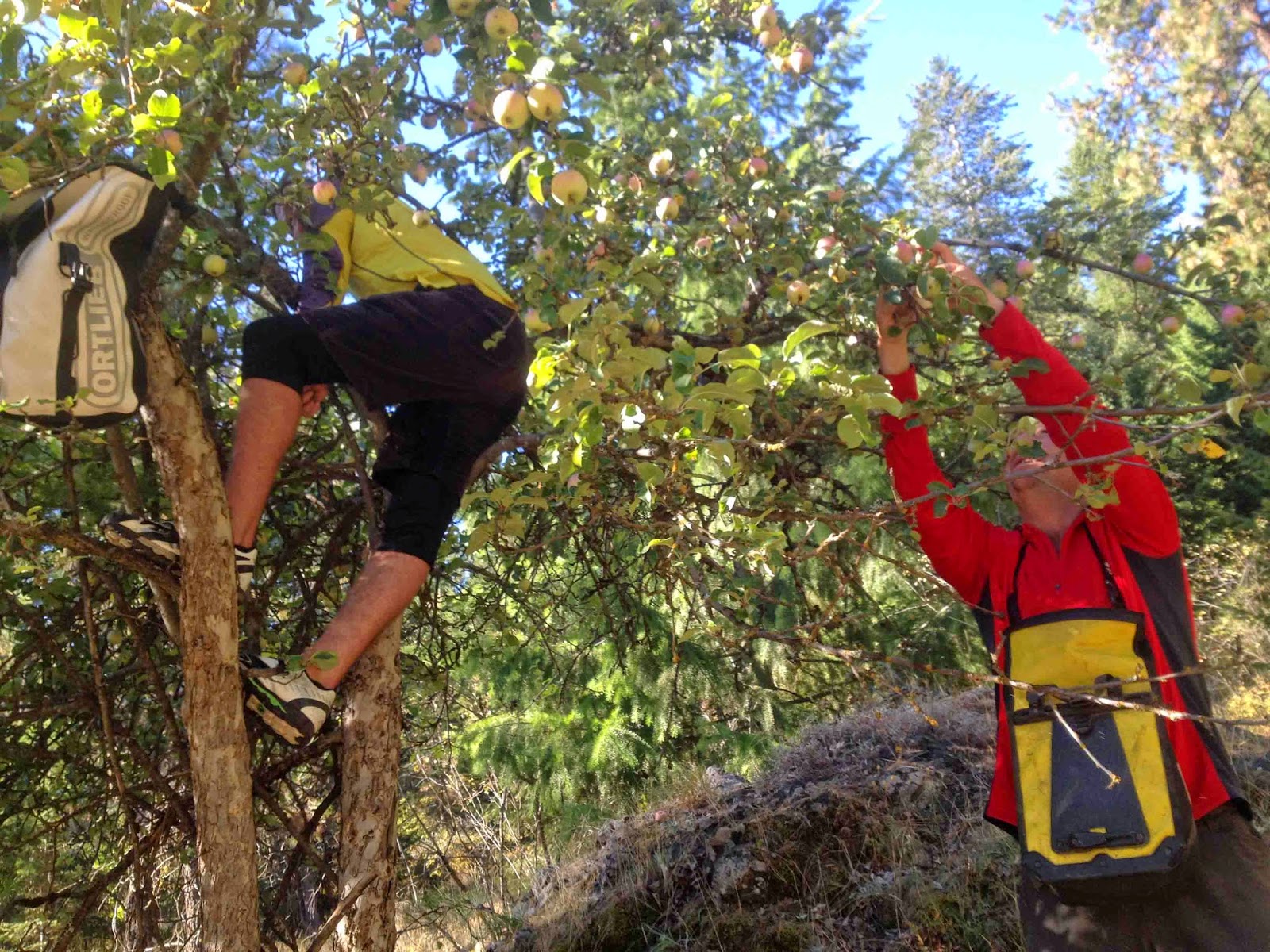 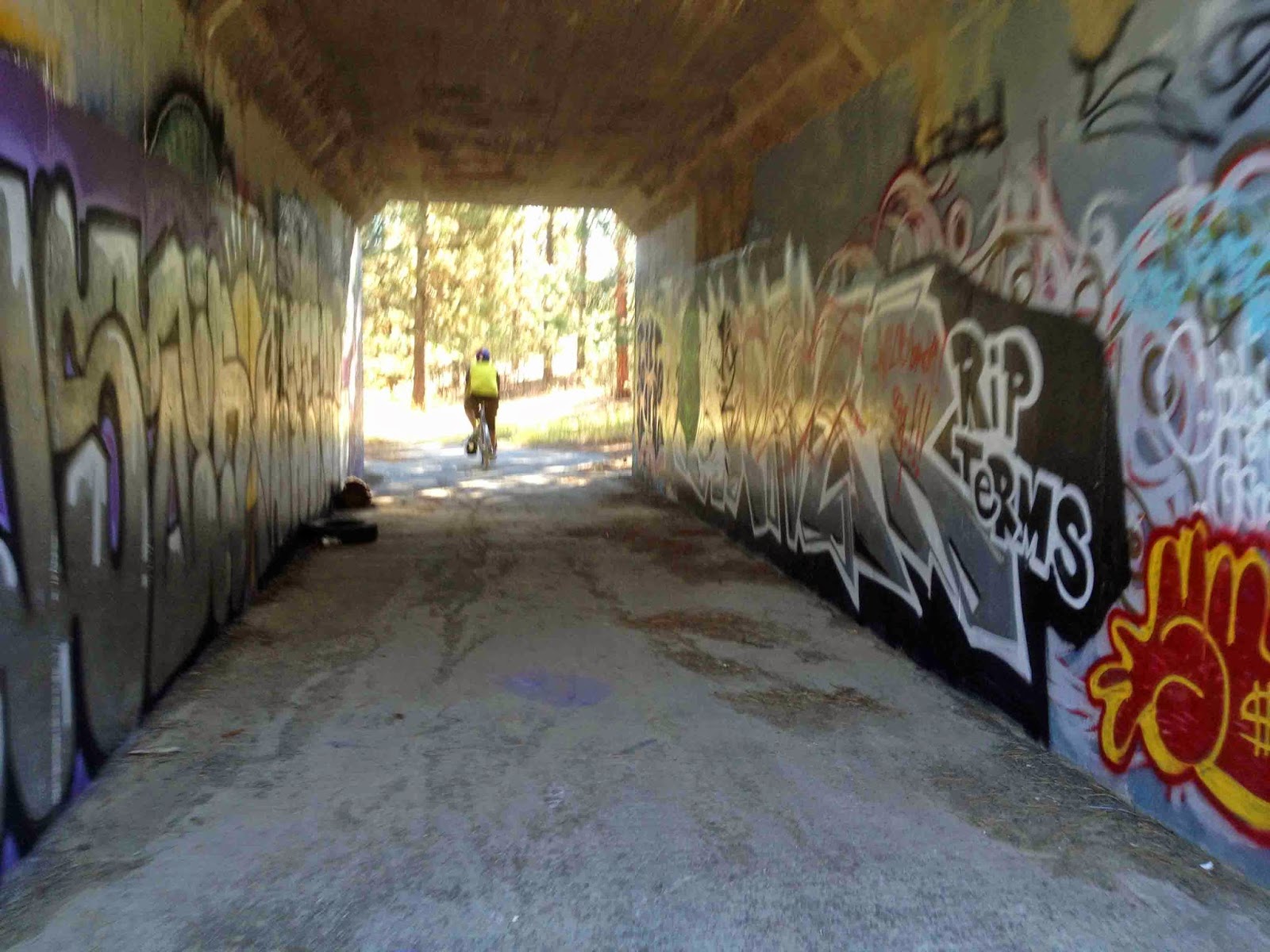 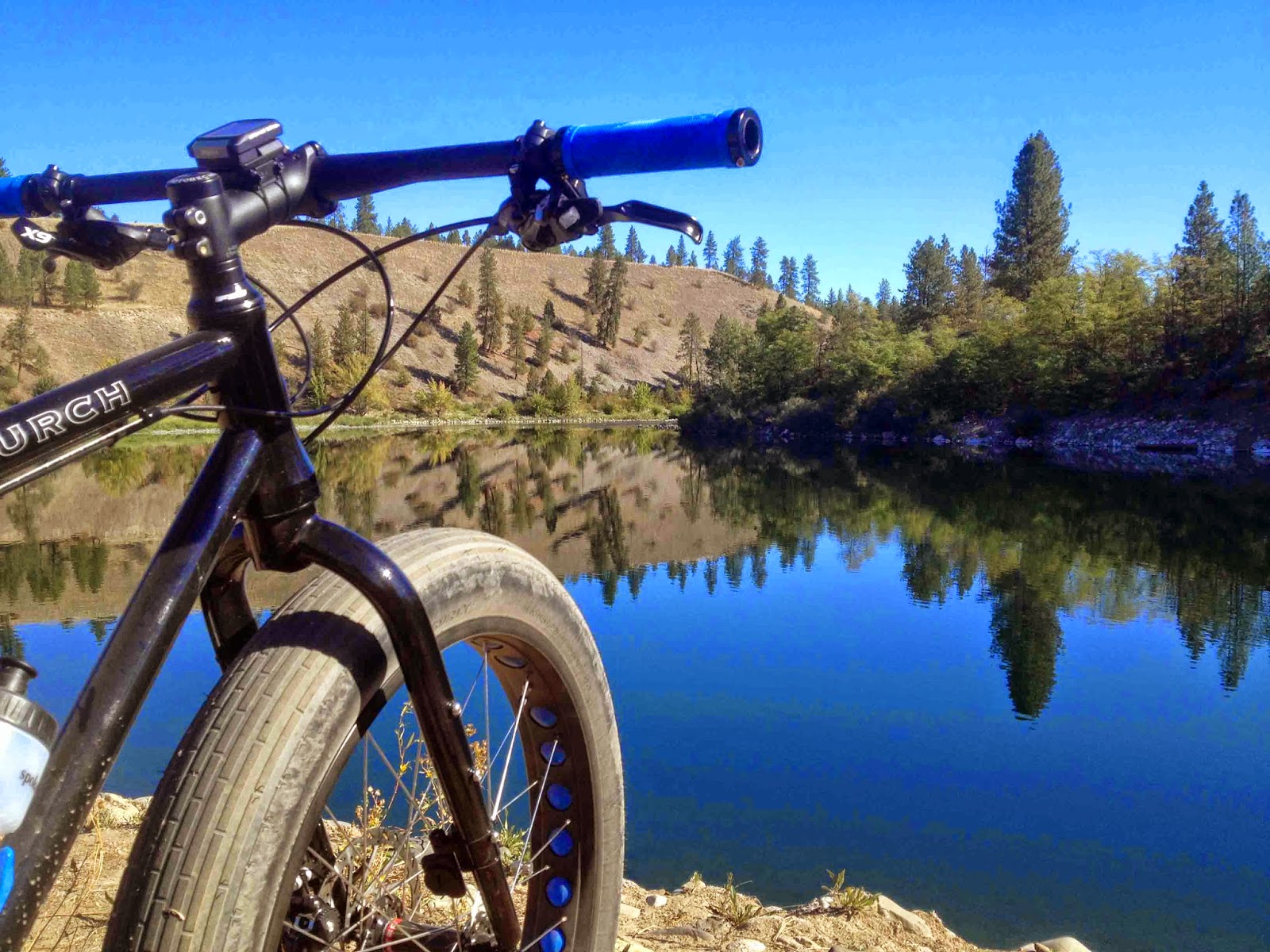 As far as the Lurch is concerned, yep, it was the first real outing, and there is good and bad to report.  The goodest of the good is that it made it the whole way, I suppose.  It's not super awesome, but it's okay.  The rear wheel was moving around in the sliding dropouts, despite an inordinate amount of pressure the the QR skewer/cam.  The seatpost kept slipping down and dropping the saddle height, which was super annoying.  I have plans for fixing both of these issues.

But honestly, why should I have to?

The answer to this somewhat rhetorical question is that I bought a bikesdirect mail-order bike.  It seems that it's just what goes with the territory.

I've had a couple of heated discussions/disagreements with some folks on the MTBR fatbike forum about the Lurch, and bikesdirect bikes in general.  Their position is that you get the same quality bike/components that you would through traditional channels, while saving hundreds, if not thousands.  I could not disagree more.

I'm not categorically putting down bikesdirect, just the opposite, actually.  I just think that with them, you pretty much get what you pay for (which is also the case with the alternatives).  And if that's all you can afford, then it's cool that you have this option, as long as your expectations are in check.

I mean, the amount of time and cash I've had to put into this bike so far to make it sort of work for me is pretty substantial.  The second half of that equation is that I don't know how everything will hold up, in the long run.  Some stuff has already been replaced and more will need to be as time goes on.   I'm guessing that I probably wouldn't have had to replace these items had I gone with mainstream brands.  And there's no shop to leverage when things get messy - they will help you, but they will charge you.  With bikesdirect, you're dealing with a remote mail order house over the phone and however good their service, it's just not as effective as walking into your LBS and working through an issue.

Maybe these bikes will end up being a great deal for some who just want to experience the different models and genres that are out there, without doing a ton of riding, which is great.

For the people that like to ride hard and ride a lot, I'm not sure how these bikes will work out.  I can very easily envision the scenario whereby you have more money buried in your mail order bike than you would have had you gone to one the major brands through your LBS and purchased what was right in the first place.

Once again, I am not trying to drag BD through the mud.   If they provide the opportunity for people to get on different bikes and try them out for a fraction of the cost of bikes that go through more traditional distribution channels, then I am all for it.  For me, though, at this 5 minutes, I can't see ordering another BD bike.  I needed to do it this time, and I think I've figured out why I wouldn't do it again.
Posted by Pat S at 10:18 PM

Thanks, Pat. As someone without the tools/time/rad skill base (although I am a decent with bike tools) the math adds up. This has been a great help!

Where was the tunnel picture taken?

Those BD fat bikes are sold at a decent price, but I don't think they are a great value given the quality of what you get.

On One sells a rolling chassis for $725 and a complete fat bike for $1375 that is head and shoulders above the BD product.

As a detail oriented person a BD bike would drive me nuts. There is a lot of denial going on in that thread on MTBR.

OTOH just imagine how stoked you will be to get a Bucksaw and sell the Lurch. ;)

>>There is a lot of denial going on in that thread on MTBR.<<

Yeah, knowing a bit about how you operate and what's important to you, I don't think you'd much care for a BD bike. At all.

All the fussery is serving one useful purpose for me - it's keeping my mind off the Bucksaw. ;-)

"For the people that like to ride hard and ride a lot, I'm not sure how these bikes will work out. I can very easily envision the scenario whereby you have more money buried in your mail order bike than you would have had you gone to one the major brands through your LBS and purchased what was right in the first place."

As someone who rides a lot and rides hard, I can attest that even going with a bike with a higher quality base build doesn't mean that you won't be replacing parts quickly. I purchased a Pugsley complete in May of 2012. In February of 2013 I had to get a new crankset as the steel insert for the pedal thread had stripped out. I've replaced bearings on my replacement bottom bracket (not a cheapie, either), derailers, brake levers, hubs, and miriad other parts so that not much left on it is stock. I do ride a lot, but even so, it feels like a lot of these replacements are more a symptom of a continued push by manufacturers to maximize profits by designing stuff to last the average rider two years, much like a cell phone.

I don't know that spending multiple thousands on a bike would see much different results than going cheap - in the long run. Parts will break. Will need replacing. Maybe sooner on the cheap bike, maybe not. A cheaper base build means you can sink a lot into it before it starts getting stupid - if the frame is one you like and of good quality.

I completely agree that buying local makes for a much easier time getting issues resolved.

I put quality parts onto my bikes and ride them hard in PNW conditions. I am not replacing parts regularly.

I tend to buy frames/forks and built to my tastes because I think in the long run I'll be happier and although it's more expensive initially it's cheaper down the road.

I bet there's even more work to be done with one of these!

Start following our signals NOW and gain up to 270% per day.

this is an interesting post but i am looking for a cheap bike and cannot seem to find one here, any ideas?