. . . has come and gone. It turned out to be a great month for riding, with roads clear enough for some serious riding during most of the month. The last ride of the month happened this morning with 3 SRV buddies - Jerry, Dale and Mike. 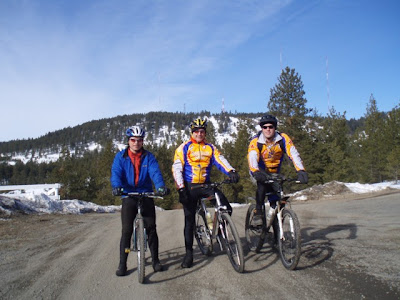 We banged around on mountaian bikes on this mainly dirt-road route south of town:

It wasn't the longest ride, but it was good work because there was plenty of vertical. The sun was shining and the winter scenery was awesome, which made the many hills hurt a little less. The road eventually fizzled out and dead-ended at a McMansion, so we had to do a bit of backtracking, but we didn't get shot for trespassing or eaten by a dog, so I'd label it a success.

As I've mentioned, I hope to road race this season and the training period I'm currently in is the base period - which is basically establishing the aerobic and muscular foundation that you can then build on with more specific training. I'm not real experienced, but I've always kind of thought of 1000 miles as a reasonable base mile target - that's kind of where I've started feeling pretty good about my riding in the past. I finished January with 259 miles, most of which were outside (which is good, because riding on a trainer is enough to drive me mad), so that's a pretty nice chunk of base training. Hopefully February will bring us more great riding weather.

If I had only one day to live I'd spend it on the trainer cause it would make that day last forever.

But yeah, hard to argue with your logic.

Looks like fun. I got a fwd of a fwd mail that mentioned a "dirt road ride with srv" leaving at 10am form 57th and Regal. Man I really wanted to go. I love the dirt roads up there -- windmill and hilby and all that. I had family in town. Looks like you had a great time. Please let me know if you guys ride that area again. I'd like to tag along.