Over the past few days, my bike life has been seriously outpacing my blogability. ness.

In an effort to get current then, let me start off with the exciting news that I have a new camera, which most of the pictures and videos in this post have been taken with, save for this first one of itself.  (Camera technology has advanced tremendously, but it's not quite there yet.) 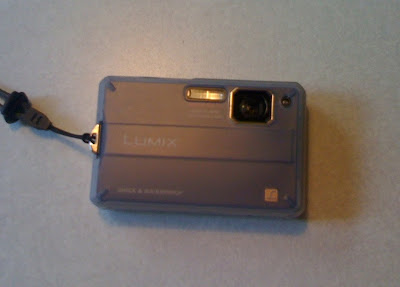 It's a Panasonic TS10 "Tuffy" (waterproof, shockproof).  I didn't fully appreciate my dead camera until it was too late.  The new one doesn't take quite as nice 'a pics, but I'm totally psyched about the abuse I can lay on it.  It takes way better vid, tho, except that it takes them in .MOV format and the files are effin humoungoloid.  So I'll have to figure out some conversion and compression scheme or something.  Very later.  It's not the high-end point and shoot of my dreams, but some budgetary restraint was in order.  I think it'll do me swell.  (That milky look, btw, is the fabulous optionally-installed silicone jacket it came with.  Think "bouncy", and wildly "grippy". I dig it.)

During my brief but intense camera research efforts, I also identified a new one for Patty - it's a Canon SD1300, which by all accounts is a great value in the point and shoot category.  It came as a package at Costco: cam+card+case-instantrebate=$120.  Jammin deal.  She has no desire to mess with settings and all that gook - she just wants to be able to . . . well . . . point and shoot.  Her last one was way too complicated and I'm hoping this is the ticket. 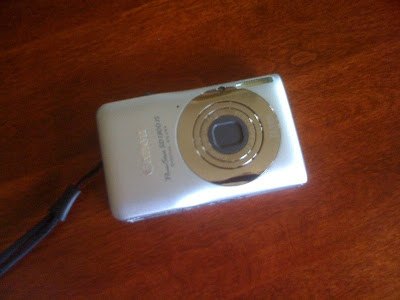 Enough bike-blog-supporting gadegtry then, and onto something a bit more directly bikey.  The highlight of these past few days was an invitation and resulting trip up to John's family property on the Kettle River.  It's spectacular just in and of itself, but with a bit of knowledge of  the events of this past year in John and Liza's life, getting to see and hear and the story of this very special place was a privilege.
﻿﻿
﻿﻿A ride in the Colville National Forest was part of the deal. Of course. John has it well-chronicled here and here, so I won't pile a boatload of redundant pics on ya, but I can't just not put up anything, either. 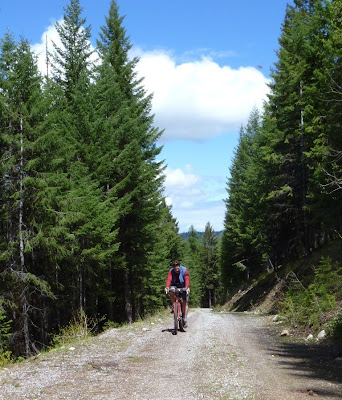 One thing I would like to point out is that John kicks my ass up every climb whenever we ride together.  Except that this time, he's still recovering from his hanger-on kickass chest thing and was purposely spinning up the hills in low gear, while I, not equipped with proper NF gear ratios, was forced to hammer a bit, consequently getting to the top of most hills before him.  It was a weird feeling.  I liked it a great deal.  And I understand that I should not get used to it.  But since it was happening anyway, I seized the once-in-a-lifetime opportunity to take a buncha pictures of him coming up the hill behind me.  My plan is that they will appear randomly in probably unrelated posts throughout the coming riding season, as the urge strikes me.

At John's suggestion and prodding, we took my dog . . .
﻿
﻿ ﻿
﻿﻿
Fortunately, reports of her death were greatly exaggerated and as of today, she was back in top form . . .

Coupla other notables from the ride:

1) Maiden voyage for the new UV water purifier. The gravity filter still rules for larger quantities of water, but the pen hereby has a niche for fast and light, low-volume scenarios. 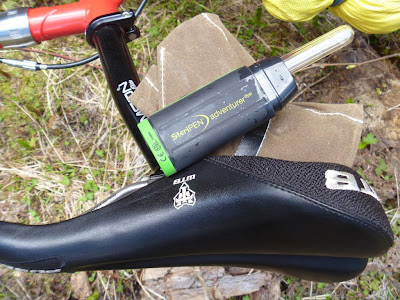 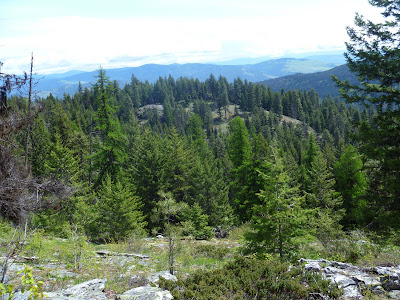 and 3) You're not gonna believe this, but I shit you not, and I have a witness. I was slowing to a stop, and my wheel caught this "kickstand" and flipped it up, and just as I stopped, it fell perfectly into place. Majicality. I shit you not. 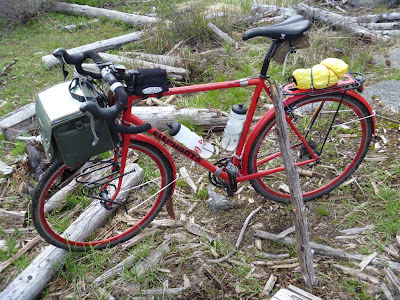 ﻿﻿
Back at John's place on the river, all the gals joined us on Friday night, and on Sat, we took a ride on the sweet country road that runs from just outside the back door, to down along the river for 3 or 4 miles.

On the way up north, John turned me on to the Northern Ales brewery in Kettle Falls.  No way Patty and I were passing back through on Sat without a stop.  The "Grouch Lager" and the "Slug Bait Sour".  Oh my. 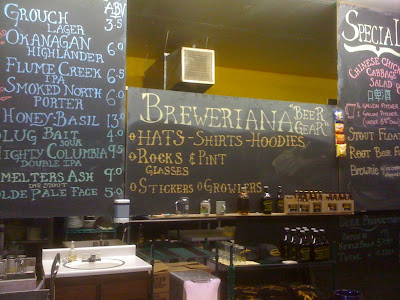 The pump track blitz build left me shovel-averse for a time, but once back in Spo on Sat night, I began to feel some shovel-love and then was subsequently totally consumed by that love and worked into the darkness on some re-shaping.  The sensuous love-child bumps are in the immediate foreground, and they are speed generators . . . 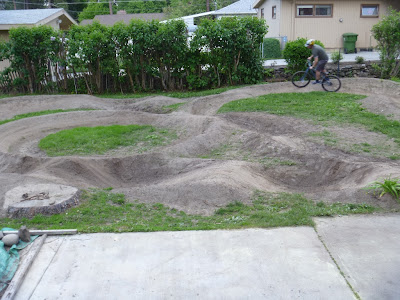 On Sun, it was out to the Cheney area for SRV/Two Wheeler Dealer's epic Cheney-Rock Lake Road Race.

At around 60 racers, the turnout was a little disappointing.  I don't know the future of this race, but I hope it continues, because there's just nothing else in the state of Washington anywhere close to as cool, as far as a road races go - a 73 mile loop is unheard of on the west side - the logistics are just impossible.  Mike and Alan had the planning so unbelievably dialed in and Two Wheeler's support was over the top. 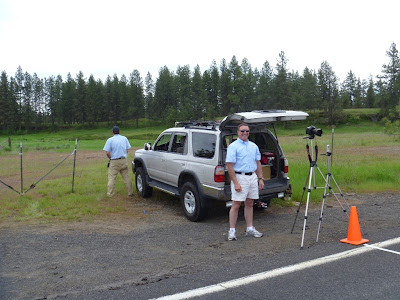 Guess we're finally all caught up then. Talk to ya soon.
Posted by Pat S at 12:10 AM

When/if you find a converter (for free) for the .MOV issue, let me know. I, too, have a Panasonic camera and it's got the same format. I imagine it would be fine if I owned a Mac, but I don't.

I have a, well, some kind of camera that stores movies in .MOV. The biggest pain in the ass is having Quicktime installed on my computers. It regularly asks, "Would you like to install Safari and iTunes, even though you answered 'No' yesterday?"
- Ventura

Wow, lots of great stuff! Brandy looks like a fun dog. Your pump track is a rarefied thing of beauty. I have to live vicariously through your videos.

Pretty awesome post. Looks like you been busy. I laughed out loud at your plans for the John pics, good stuff. I bet it felt great.

I like the John pic plan too. I have about 15 pics of Pat's ass from our weekend of riding together. For each "top-o-the-hill pic" he publishes, I'll try to publish a Pat-ass-pic.

Alan, all I know is there are a bunch out there. When I get around to finding one that works, I'll letcha know.

Ventura, agreed. Totally. Not only that, but I have an iphone and a PC, and having to deal with itunes popping up every time I plug that damn phone in to do something as simple as pull a picture off or something is enough to drive me over the edge. Funny about how Steve Jobs made the comment this week that "Keeping these devices in sync is driving us crazy". I'm like dude, ummm yeah? I'm just a stupid dork consumer of your goods, but I think maybe you might wanna take a quick look at your stupid-ass software?

BDD, I take it you haven't had much success talking your wife into letting you build one of your own, then? Damnit! You might have to resort to building it on the sly while she is out out of town some weekend and then begging for forgiveness when she comes home. That's the plan for the north extension loop on my current track, anyway. (Shhhhh.)

Jon, yeah, it wasn't a bad feeling at all, but like I said, I'm not getting used to it.

John, that's the kind of internet fame I dream about, but before you go there, just think about whether or not you really want to do that to your blog. Loyal readers are hard to come by and once you've forced them to avert their gaze, it's no small task to get them to look again.

My wife is slowly warming to the idea, but the possibility of having to move in the next year has put a damper on things. I'm laying the foundation for a long-term plan by getting my daughter hooked on dirt riding. Phase one of riding local trails is an ongoing success and phase two is about to begin with a Craigslist BMX, not unlike your new acquisition.