It's been exactly four weeks since my crash. This weekend was about getting back in the saddle. I picked up dirt after work on Friday and did some track mods over the weekend that made me feel safer or whatever - rationalization and head games and managing fear mostly, but also partly some good improvements that came out of four weeks of reflection. John was over for moral support or is that Evil Knievel, the new nutcase is messing with my head. 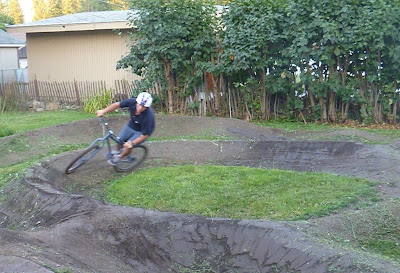 I'll be honest, I was scared shitless for a coupla laps, but once I was able to loosen up, it was so rad to be back on the track. 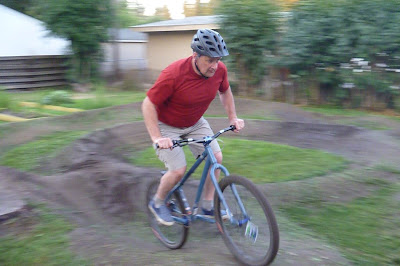 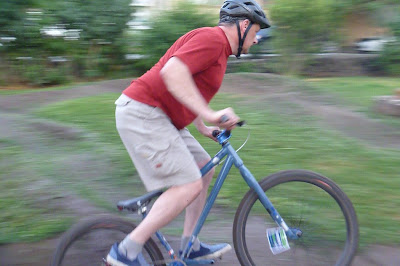 Pump track, I'm sorry for the harsh words. You complete me.
Posted by Pat S at 9:58 PM

Nutcase. Don't they make helmets? It's good to see you and the track have reconciled. Have a blast.

You put so much work into that thing. Every city should build one of these :

Andrew, yeah, every city should have a rad bike park complete with pump track and so you are lucky in that sense. My little track has pretty much taken over a bike year of my life and so it's not sustainable in the long term, but building your own track is also a unique experience that teaches you things about tracks that you wouldn't appreciate just by riding them. Intimacy and satisfaction with the whole big deal with vs just hitting a municipal park, I guess. Lotta work, ya. Limited life span, ya. Regrets, nonewhatsoever.

Thanks for the clear to fo-gettabout-it, my Italian mob roots are at ease. I will now think you play, you pay, and what's another hole to the head, we all could use one sometime :)

Chad we're clearly all good then (what human male doesn't like being called a stallion), only question that remains is when you're coming back over to hit the track?

It's good to see you and your track are friends again...loved ones know how to hurt us the most!

Pat---Thanks for the invite, would like to give it a try sometime, I see you have been having the "pro's" over riding it, maybe a bike with training wheels and I'm good to go, not record setting here..at the moment I am slammed with the interruption of a thing called a job, stupid things...and the lose of day light is creeping, but I would take a rain check.