My pump track crash was three weeks ago today. I hit pretty hard. F%@kin' hard, actually. I've had trouble focusing my eyes due to some swelling around the socket, but I think that's mostly over with now. Lingering problems are a rib injury and what I think is probably a broken bone in my left hand. Based on past experience with those two types of injuries, I'm guessing I'm about halfway there. The hand is the most problematic, because riding aggravates it, and I'm thinking the only way for it to heal is to stay off the bike, so that sucks.

So that mess, combined with some pretty serious overload at work has left my head in a pretty weird place. But maybe it's okay and even a good thing, as the out-of-saddle time is cause for a lot of reflection on what bikes really mean in my life and what I want out of them going forward. My obsession is fully intact, but I've never considered it as anything as serious as a religion. A super happy escape/diversion from the hard realities of life though. Anyway, I think I'll be altering my course a little. Not drastically.

Biggest thing is, I'll be getting a fatbike, barring something major like my own death. I'm now fully engaged in this particular form of insanity and I've been having great fun sorting through the nuances of the various equipment options. My major fatbike focus is next year's cross-state tour on the John Wayne Pioneer Trail, but I'm convinced I'll have all kinds of other fun once I get one in my hands. The following vid is more extreme than anything I will ever do at my age, but I'm so incredibly captivated by the possibilities. It may not be your thing, but maybe you can at least get a glimpse of the bug I've been bitten by:

Yeah, the idea of crossing the Columbia on a packraft. I know.

Second biggest thing is, I think, maybe, I'm ready to live without a road bike. The dedicated lightweight roadie kind, in this case my Orbea. In my mind, a road bike's always been a pretty solid part of my stable/who I am, bike-wise, but I've hardly used it these last 2 or 3 years and when I have, it's been fun, but not all that. It wouldn't have to be forever, or it could be, but I think it's time to let go of this particular security blanket. Watch for it on a craigslist ad near you.

Other than that, there was some dolling up of the Elephant tonight, in advance of the big Elephant-owner's photo shoot this week. See how well I have Patty trained to mow the yard while I wash my bike? 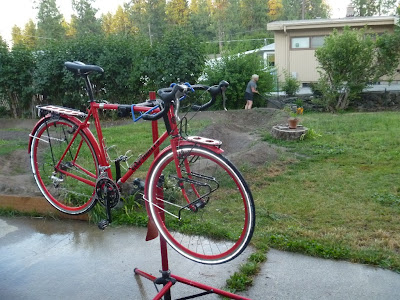 Know how I talked earlier about my own death? I think it's now imminent, once she reads what I just wrote.

I've also been working on a basement organization project - the BABSSA (Bike And Bike Shit Storage Area). It's a long-overdue project, as I have krap scattered all over hell in the basement. That pile in the foreground is what will now get organized and put on the shelves. I'm proud of the fact that except for just a couple of new 10' 2x4's, I did it all with recycled materials that I have around, including the paint. (The color is what I got when I mixed a buncha partial leftover cans of paint together and it's not pink, dude, it's mauve.) 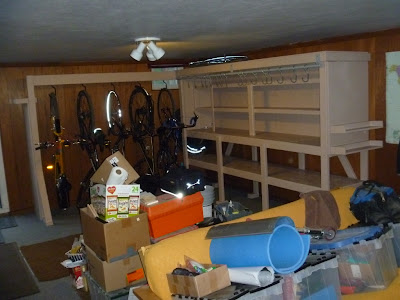 So anyway, good catching up with you. I'll try to get my head screwed on a little better and not be such a stanger.
Posted by Pat S at 10:33 PM

I don't get the fat bike thing... but I do get the packraft thing. Mountain Gear has a pack raft and when I got to fondle it first hand my mind lit up with ideas on where and how to use the thing right here in Washington state.

Anon, thanks for the tip. I need to get over there and get my hands on one of these.

3 weeks ago I witnessed the pump track whipping, and now Pat reports his severe injures...man do I feel like a royal schmuck for asking for a demo......I owe you man, still so sorry and wish I could do something.

Take care of yourself, the roads & bikes will still be there when you heal!!

Chad, as a cradle Catholic, I feel qualified to tell ya, you gotta shed the guilt, brother. I was all about the demo and shit just does happen. Besides, me and the track are all poised to come back faster, stronger and radder, stay tuned.