The fuss over what and how to take on my cross-state tour has been building for a while. The crescendo is still a ways off, but it's at a super healthy pitch right now. Which places me fully in my element.

I'm pretty much in love with my DSLR and wouldn't really consider leaving it behind, at this point. Heavy turd that it is, even. Since getting it, I've been packing it around by bike in this shoulder-sling affair, essentially a messenger bag-turned-camera-carrier. It's been okay for my shortish trips, but it's kind of a PITA and not even remotely a candidate for the long haul. 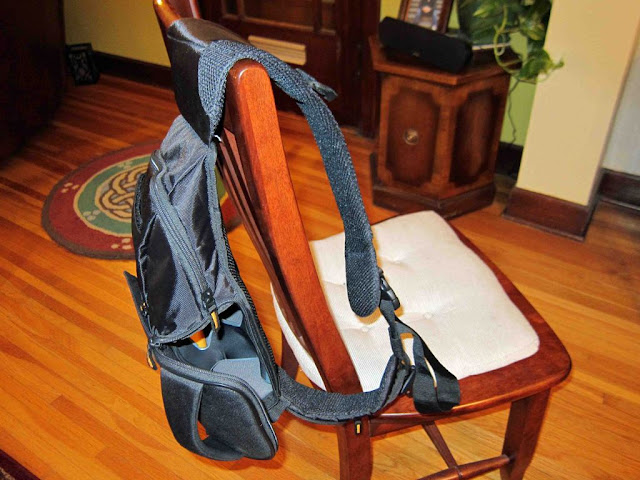 I was unexpectedly back in Milwaukee this week and ended up having a bit of free time one afternoon, which I decided to use up at the sort-of renowned Ben's Cycle. Of all the cool and unique things one would expect to find there, what ultimately ended up the fancy of my eye and pocketbook was this rather mainstream handlebar bag, complete with all its plastic mounting bits. But I got pretty excited about it, because it struck me right off as having serious DSLR-hauling potential. 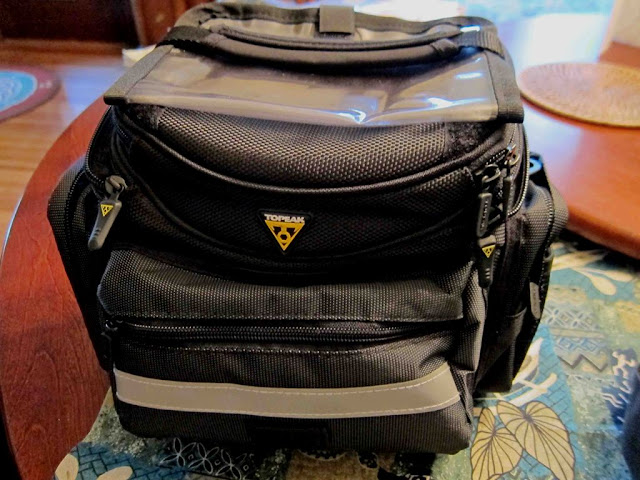 The fine folks at Royal Upholstery hooked me up with this foam remnant of just the right density. 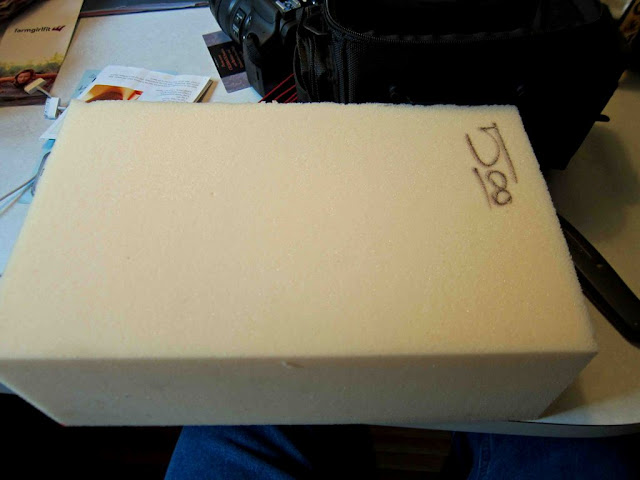 I set about carving. 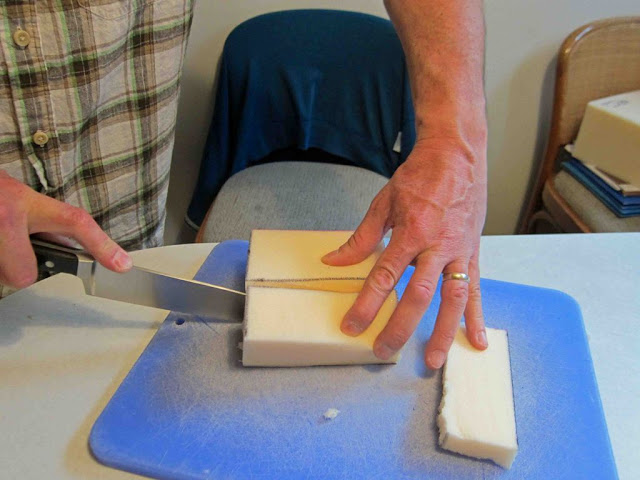 A no longer needed closed-cell sleeping pad was also sacrificed. 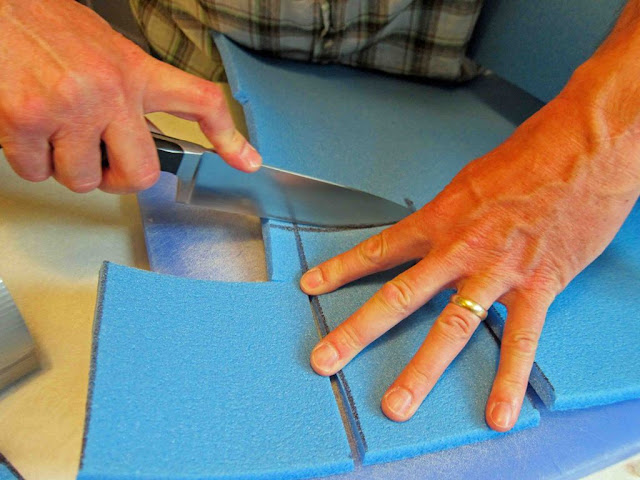 I wrapped the furniture foam with this rad stretchy nylon material that I got at a fabric store for some way different project a few years ago. So that the furniture foam won't shed upon my camera. (The pieces look uneven because the camera body is uneven. I can't believe you would question my workmanship.) 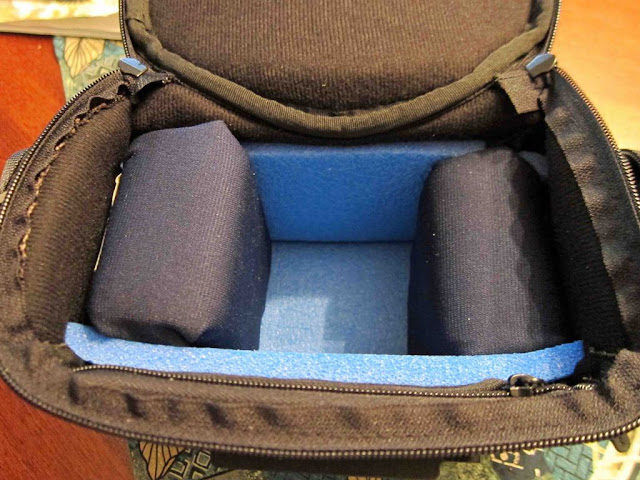 I was excited to head out to the shop and try it on. My enthusiasm was a bit deflated when I got there, however.


Post fixing of the flat, though, the bag went on and I think it's gonna be total money. Super easy access, and far enough forward to avoid being sweat-dripped upon. 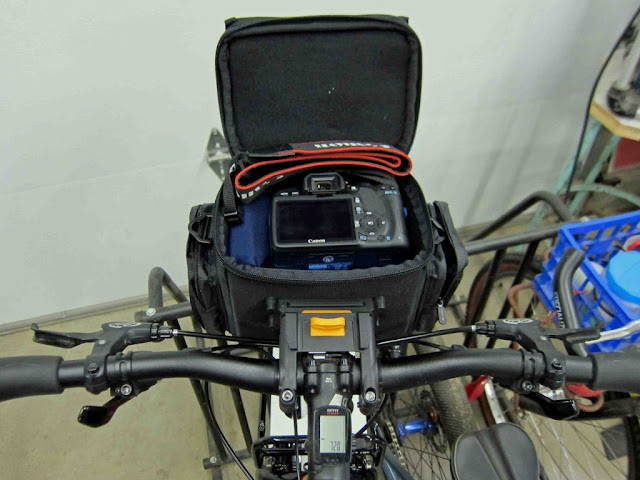 It also has some sweet side pockets and another secret top flap that will rule for carrying extra memory cards and batteries. Or baseball cards. Or toothpicks. A comprehensive selection of band-aids, maybe. 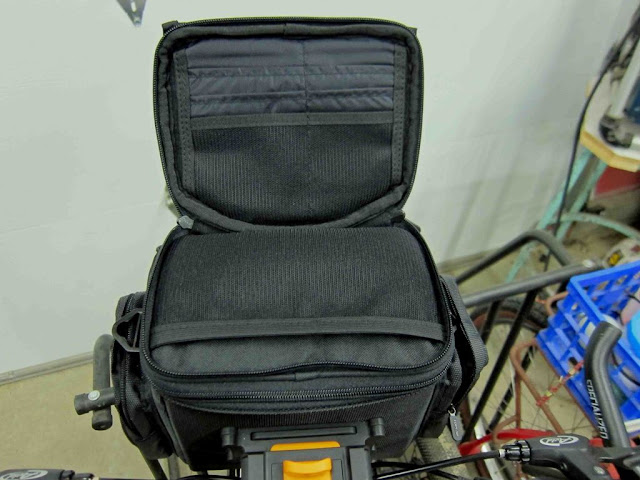 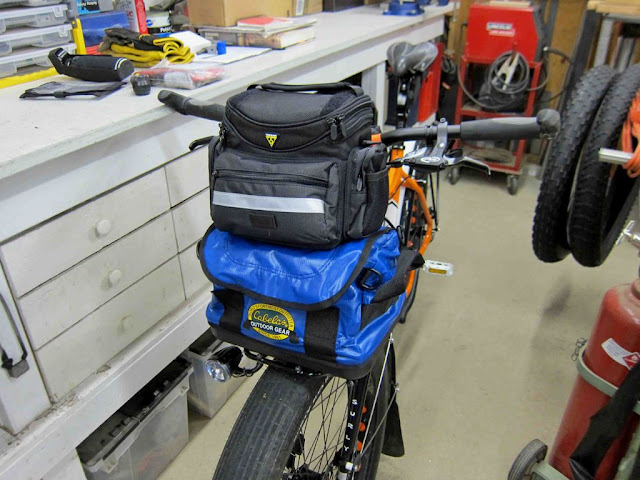 For all its shortcomings, Cabela's has a pretty respectable dog-toy section which I always scour, if I am there anyways, looking for a tackle bike bag. I scored a particular version of glow-in-the-dark frisbee which you would have to be way into the business of throwing a fris to your dog after dark to understand why it's better than other versions and which luckily, you have a life and don't care to understand. But trust me and Brandy, it's special. We thought that we should test the new camera bag and the new special fris, all at once. As we were headed out the driveway, my neighbor also informed me that there was some fancy moon event going on whereby it was bigger than it normally is. I already had my tripod on board so all the better.

188 shots later (and I am not kidding), a decent moon shot still evades me. Holy hell, moon shots are just harder than shit. It's probably not that tricky if you have half a clue what you are doing, but I obviously do not. This was the best I could do. 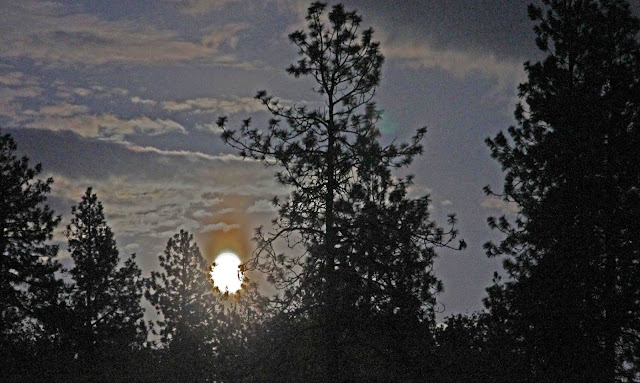 Despite that though, the new fris flies real good.

Nice job light painting! And having the dog help!

whoa. 'chucking it' is a rad pic. Like a laser being shot from a passing UFO. well done.

Thanks, Tyler and John. That was the result of setting the camera on 2 sec timer followed by a 10 shot burst mode. I'd hit the shutter button and then run frantically off to the side and chuck the fris. We did this 7 or 8 times, trying different light settings and hoping to get lucky with a trajectory that worked.

Brandy was noticeably annoyed by the imposition of all this photography bullshit on playtime.

Oh wow, so you actually did a burst mode at night? I was assuming the easiest thing to do would be to pick your shutter speed and then let the camera pick the rest of the settings. So did you just overlay the 10 shots on top of each other to get the effect then?

No, I'm quite the beginner. I just used burst to get a bunch of shots, and then simply picked the best one.

I, for one, would be very interested in more specifics on the glow-in-the-dark frisbee. There's no way I could take as cool of photos, but I do have a dog who is learning to fetch.

Also, did I miss the post when you installed some new rubber on your fatbike? Snazzy treads.

So you are the boss? I had assumed Brandy was the boss.
Also, I'm quite jealous of your upcoming bike tour.
- Ventura

The moon shot and the Frisbee out-and-back shots without the descriptions could start quite a conversation on the UFO/Chemtrails conspiracy blogs.

Doctor Andy D (D.A.D.): It's available at your local REI - it's this one. Scout will love you. More.

Ventura: Touché. Despite my momentary delusions, I am admittedly not the boss of my dog or my marriage.

TBCC: That's something I hadn't even thought of. I think it's time to start a new, anonymous blog. With a single entry.

Thanks, Pat. Scout and I will have to give it a try once she masters standard flying discs. So far she's better with a ball and we're working on the return part of the equation.

It has been said that any bettor needs to see this,

Watch this or quit placing bets on sports...