My mom passed away over the Memorial Day weekend. It sucked and it ruled. I will miss her terribly, which sucks. But she suffered so long and hard, and now she isn't, so that rules.

Me and my dad and siblings are full-on into honoring her as mightily as possible and it's shaping up to be a fantastic celebration of her life and that's all very personal, as it should be.

But I do keep a bike blog, and therefore I can't help but post up a little something mom-bike-ish. Part of my grieving therapy, I suppose. The best memory I have with my mom, bike-wise, is the whole deal surrounding my undeniable lust over a Yamaha moto bike. I don't have a sharp memory of dates, but I must have been ten-ish. Or twelve-ish. Not sure, exactly. At any rate, the moto bike was basically a bike that was developed by a motorcycle manufacturer by lopping off the engine and tranny and adding pedals. If you were to go back and look at Yamaha motorcycle frames from that same era, you would see a major, major resemblance.  It was the craziest thing, probably early 70's time frame.  You actually went to a Yamaha motorcycle dealer to buy one.  I don't have actual pictures, so I stole this off the interwebs (thank you to whoever I stole it from, I rarely do this, but it's for a good cause) . . . 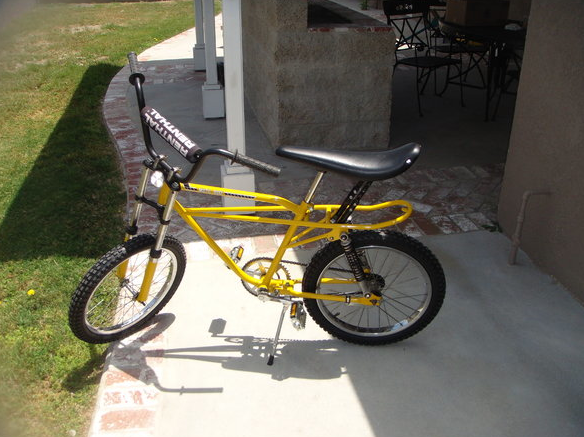 The excitement that I experienced surrounding the acquisition of this bike is beyond description. I can still taste and smell the bike and the dealership and the glossy brochures that I fell asleep with during the wait. I don't know what ever happened to it, and I don't know the exact financial details of it's purchase, but I guarantee you that I earned most of it, because Mom would have set it up that way, to make sure that I appreciated it. And did I ever. A little while after taking possession, I organized a "bmx race" in this empty field known by me and my buddies as "camels hump". Shrewd dude that I was, I made the course mostly downhill and kicked ass all over my friends, who all had rigid stingrays. Can't remember exactly what the trophy that I awarded myself looked like, but I certainly enjoyed receiving it from myself. Anyways, point of this whole thing being, I had this totally off-the-wall bike obsession (it started that early, apparently) and Mom supported me 100%. She was always about getting outdoors and being active, even before it was fashionable. 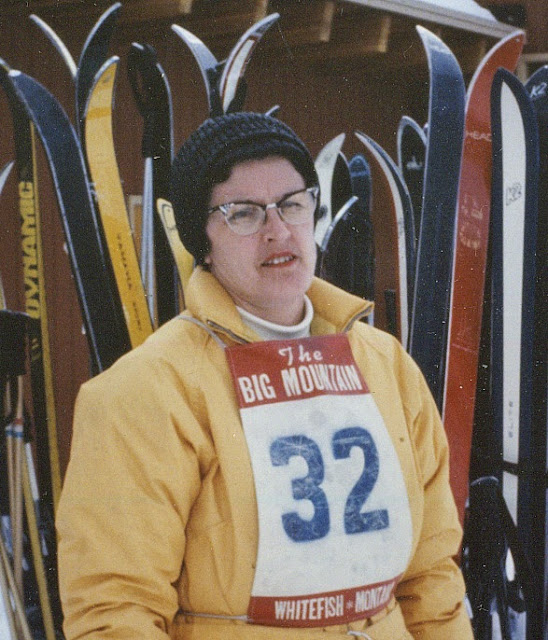 Check out the glasses. Mom is so badass. Probably righting some fashion wrongs in heaven, as we speak.

Pedals 2 People used to have one of those Moto-bike frames (I remember picking it up with a load of donor bikes). I have no idea what happened to it, John Speare might know.

I'm sad and glad for you and your mom Pat. Hang in there.

Ken is right. We couldn't give that frame away. Last time I saw it, it was in the old shop. I know we wouldn't toss it. Someone may have eventually bought it. It's good to see the original pic -- I always wondered what the fork deal was, since there wasn't a fork on it.

Sorry to hear the about the passing of your Mom.

Sorry to hear of your loss, Pat. It's difficult to convey the nuanced complexity of a person's life in a few sentences, but the story of your Moto-bike illustrates a very special Mom.

BTW, my first new bike was a Gambles department store imitation version of the Yamaha Moto-bike, circa 1975. Heavy, but lots of fun.

Thanks guys, I appreciate the kind words.

My condolences on the passing of you mother, Pat. It's so great that you are honoring her with such a vivid and special memory of such a rad bike. Thank you for sharing this with us all...I'm sure it makes all of us appreciate all the badass things our mothers have done for us over the years.