Justin was over tonight for the first time in a while. He's had some minor events going on in his life, like moving into a house he just bought for example, which have delayed the finishing of his rack. He was clearly eager to liquify some metal when he showed up. 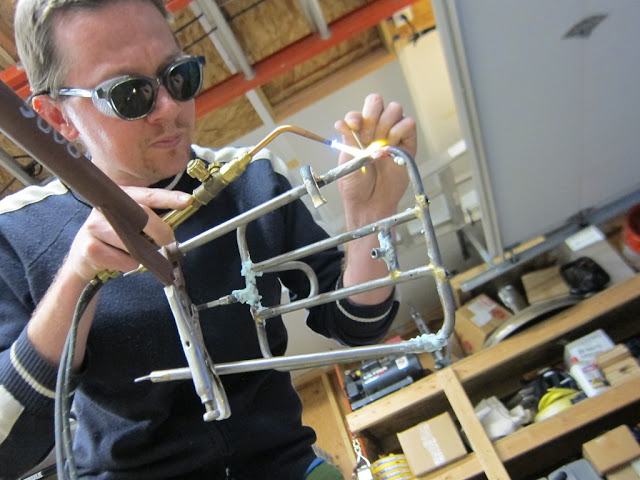 The rack was already almost done, except for some finish details, amongst which was the light mount. Which he totally nailed. It's serioulsy awesome. 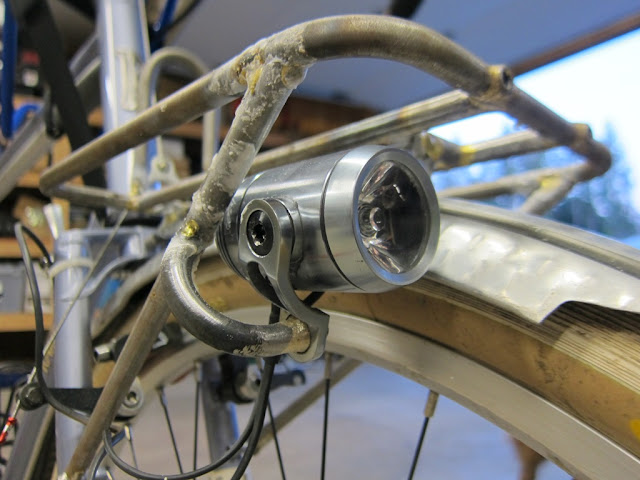 There was a point at which the fitting and tacking was done, and it was evident that it was time for Brandy and I to head down to the park and get outta his hair so he could get into the brazing zone. We took the cue. 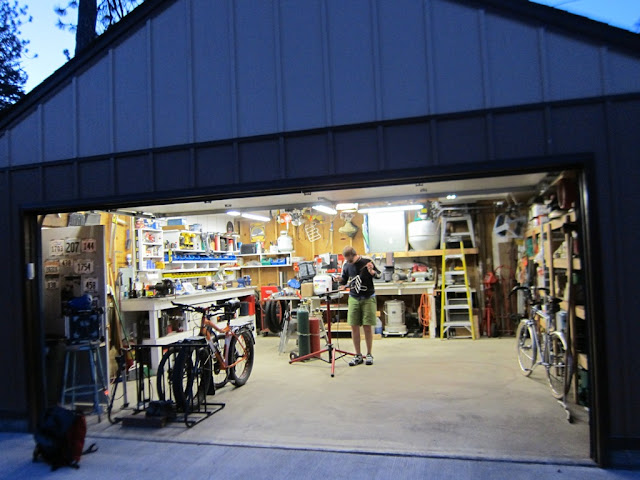 Rack projects in general are fraught with peril and this one was no exception. A minor snafu resulted in a moderate amount of hot setting and just a bit of cold setting. 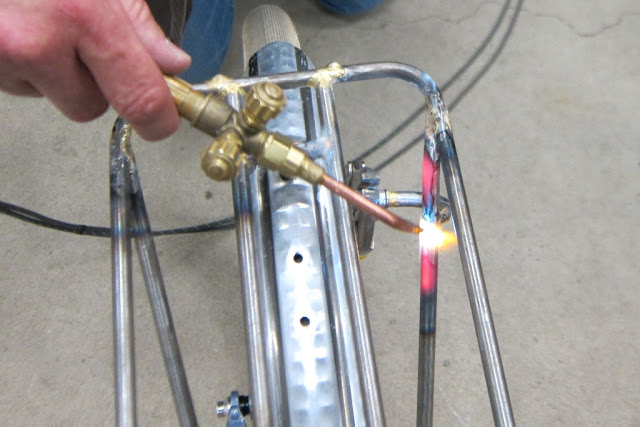 Water quickly under the bridge, though. This rack is pretty rad. Since we can't get it to powder tomorrow anyway, he's gonna ride it over the weekend, to make sure all the angles and dangles are satisfying. The angle between the deck and the stays makes it look all kinds of fast while standing still. 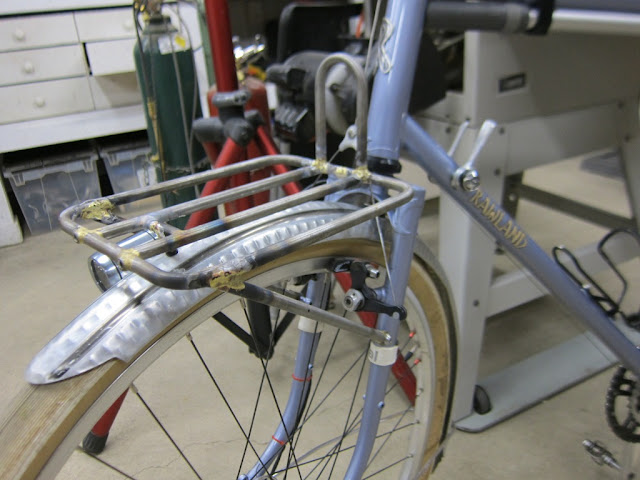 I was gonna call it a night after he left, but apparently I just couldn't. I decided to fix the slow-leak front flat on my Elephant. Evidently this the year of the thorn. Karmically speaking, I have obviously done something not good; I just don't know what. My biggest fear at this point is the sense I have that karma hits dense people the hardest. 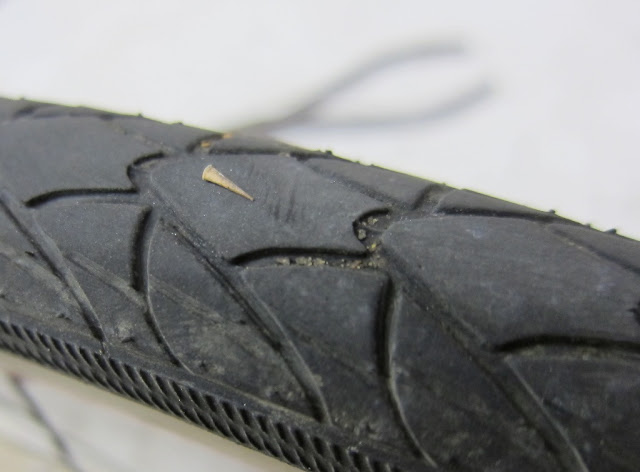 Upon pumping up the newly-repaired tube, I was treated to an explosion. I always do a quick check around both sides of the the rim/tire to make sure the tube isn't pinched in that space. Except for this once, lazy bastard am I.  Paid the price. 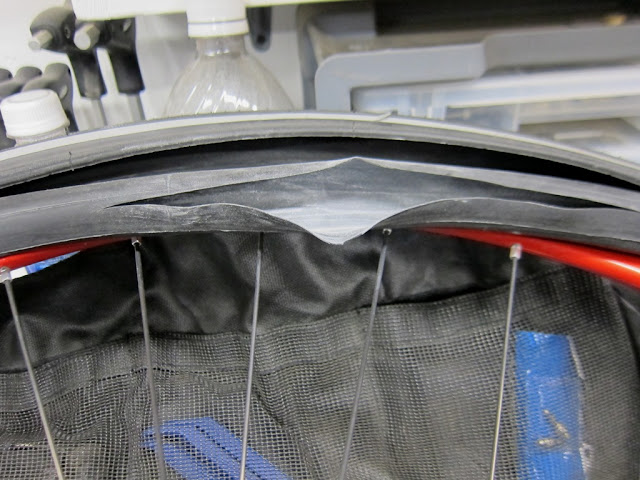 Scared the krap outta the dog. Worse even for me. 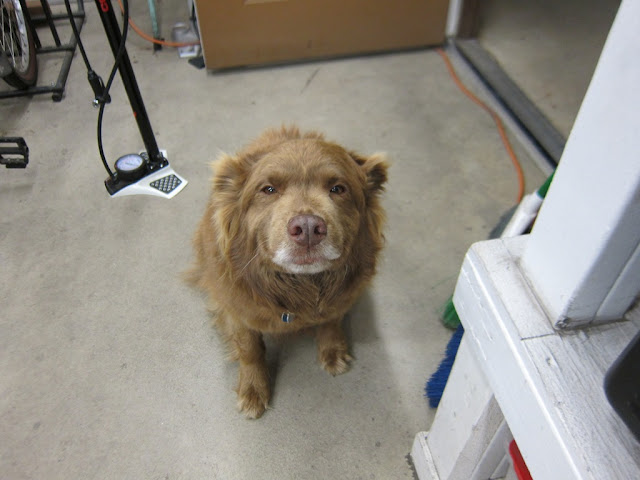 Pretty cool Thursday, then. Wonder what Friday will bring. 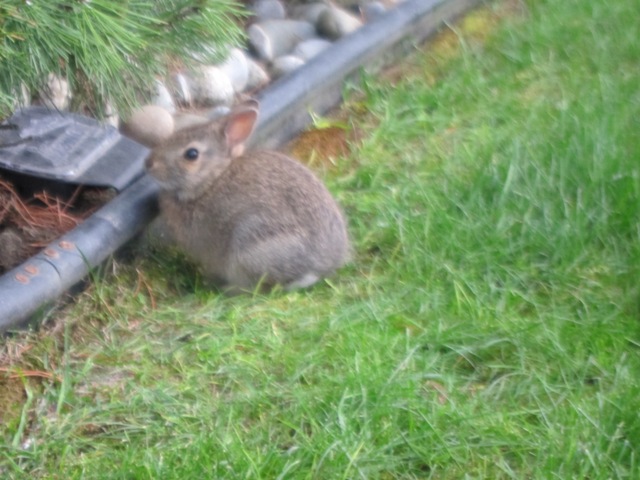 The aftershock of the explosion is evident in the stink-eye that Brandy is giving you.

I'm jealous of the size and cleanliness of your garage!

Vik: It's probably not quite as organized as it appears from a distance, but it's a pretty great place to hang out and dink with all manner of bike stuff.

Pat dinks therefore he am.

Difficult, if not impossible, to refute.