Saturday last was fully consumed with a recon trip to an important section of the JWPT. Section being, a 35-40 mile stretch of the line that hasn't been abandoned - part is still active and part is non-active, but with rails and ties still in place and not rideable, even with a badass fatbike. The usual detour is to get out on the highway or side roads and just get through this section and get it over with, but this sounds like a miserable intermission to my planned symphony, so I turned to who else . . . Google Maps. Which (who?) quickly pointed out that there are some "waterways" in the area, alongside which there looked to be the promise of some form of bikeable passage. But I'm getting ahead of myself.

Before I could launch the recon effort, I needed to figure out a better solution for transporting my portly steed, because I will be needing it (the solution and the steed), and also because I'm sick of loading this heavy-ass turd into the back of my truck. This is the rack for the job, I think. We got it last year so that we could interchange it between my ancient truck and Patty's shiny new sedan, depending on our whims. 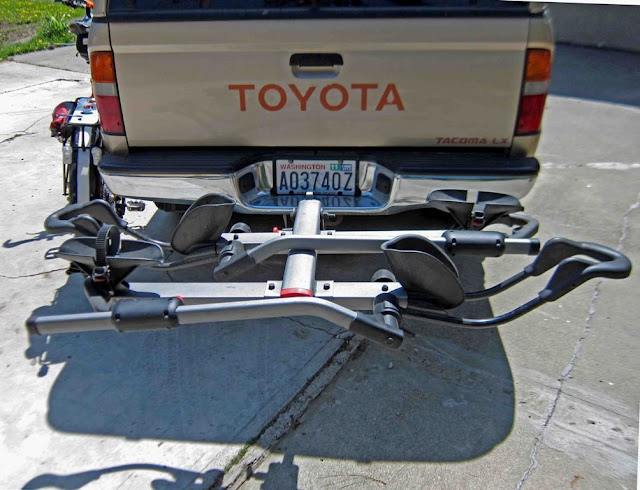 The solution turned out to be fairly painless . . . all I really had to do was drill out the rivets holding on this molded plastic jobbie . . . 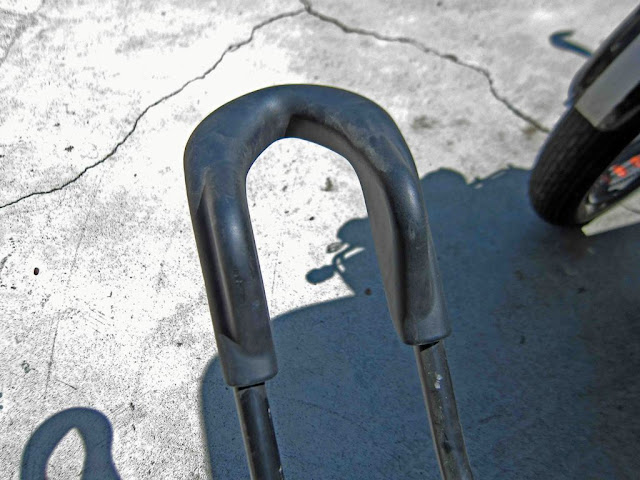 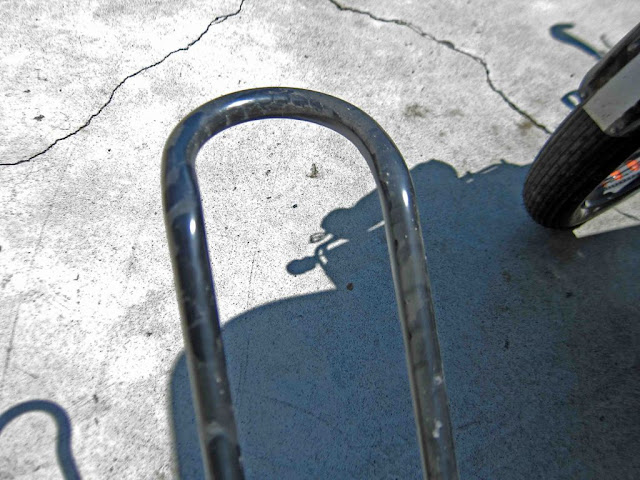 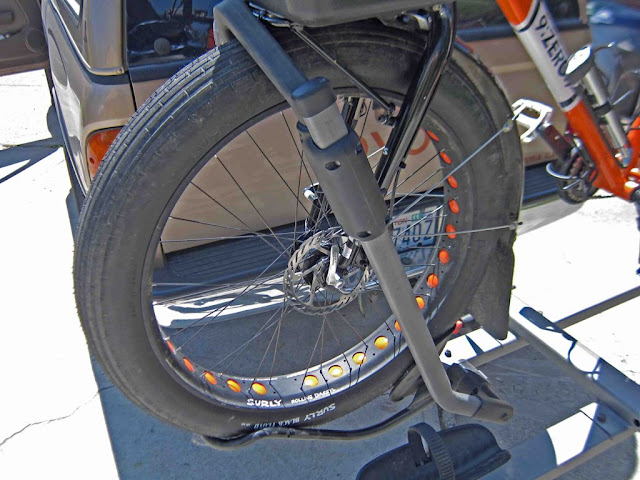 Oh and also do something about the stock rear wheel strap that was about a thousand miles too short. Thule and Yakima must be so totally hoping this fatbike craze will quickly fade away and die. 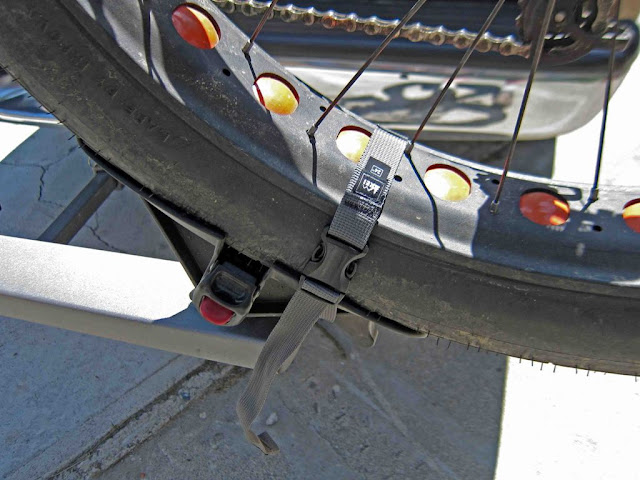 Problem solved and back to the main story line then.  This is the alternate route that I'd mapped, along what I surmised to be irrigation canals between Warden and Othello, but the necessity for the in-person visit is that you never really know, until you get there.  Maybe the passage-ways were gated and off limits to all but the keepers of the canals. Or whatever else you can't tell from the online peekhole. Maybe this, maybe that. 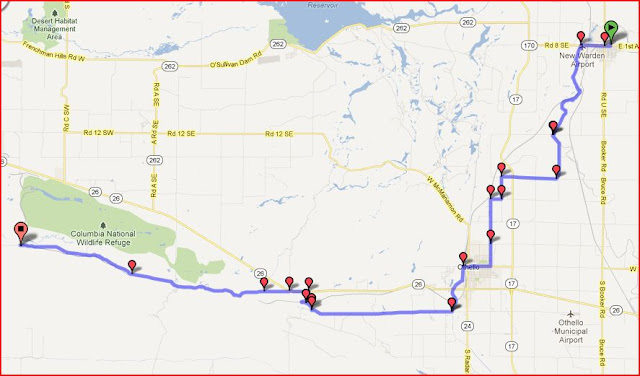 Upon arriving in Warden of course, I had to spend about half an hour getting confused by my gps and getting my bearings, but I eventually found the trail, just as it enters Warden. 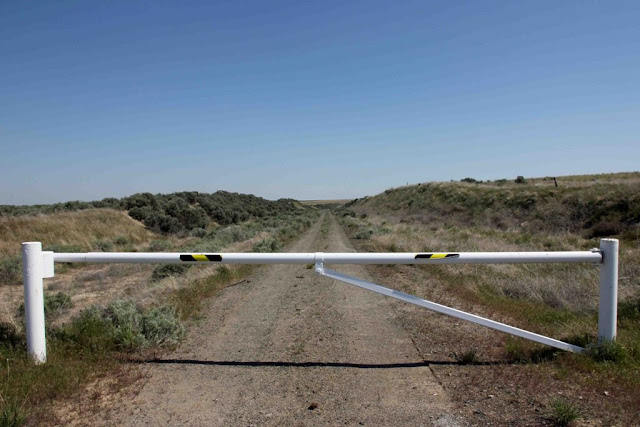 Shortly afterwards, however, it turns into the full meal deal. You could maybe ride beside it for a while, but I think that option would quickly disappear and besides, it would suck. 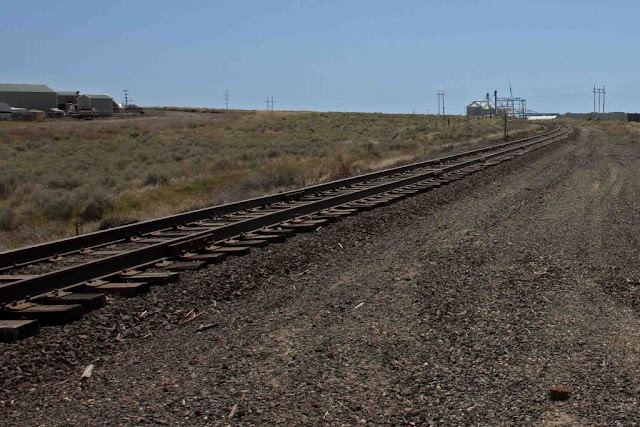 So I followed my pre-planned route and was quickly rewarded with this awesomeness . . . 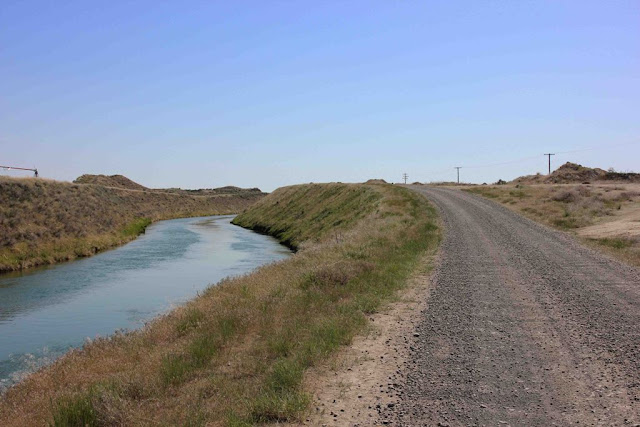 Photo practice, the price you must pay for reading this blog . . . 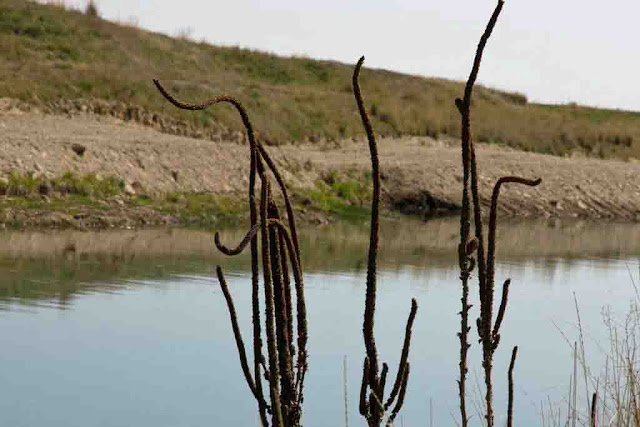 About a quarter of the way into my total ride for the day, I flatted. And no sooner did I get it fixed, than I flatted again. So in somewhere around 80 miles of recon, I've flatted 4 times. All from thorns. If this flat-to-mileage ratio holds up, I can look forward to 18 flats on my tour. We're talking here about a horrifically mistuned instrument amidst my symphony. First chair needs vacating type of stuff. Something I need to address in the next few weeks, then. 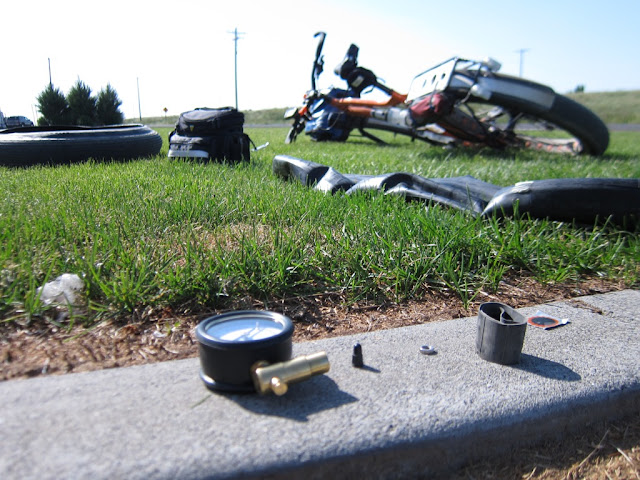 This is reportedly a bike blog and so I'm working hard to keep the agricultural and livestock pictures to a minimum, but those activities define the region and the sights, sounds and smells were wonderful, as far as I was concerned. Even the really smelly smells. 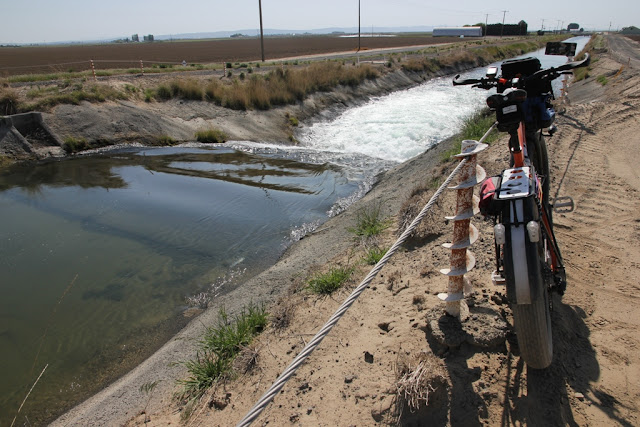 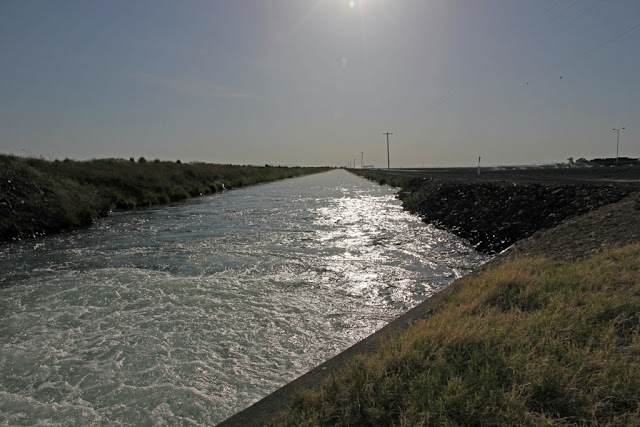 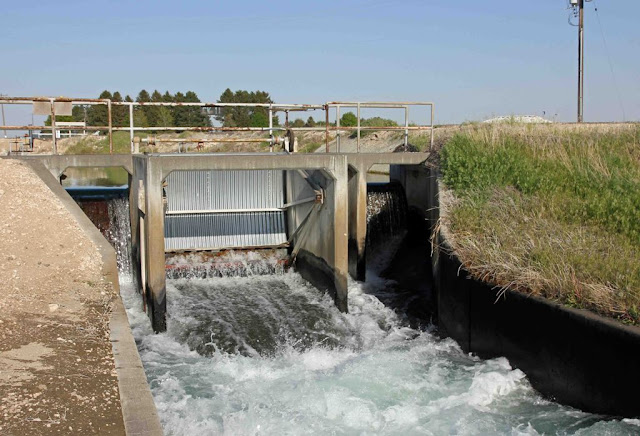 This next picture is significant in terms of yours and my twisted online relationship. You're looking at hours of blood, sweat and tears (not to mention piles of cash), pedal-propped against the rail, leaning towards the irretrievably deep canal. Precariously balanced. I didn't breathe once during the setup, shot, or subsequent lunge to get my hand back on it. All so I could deliver the photographic goods. This is how much I love you guys. Let it never again be questioned. 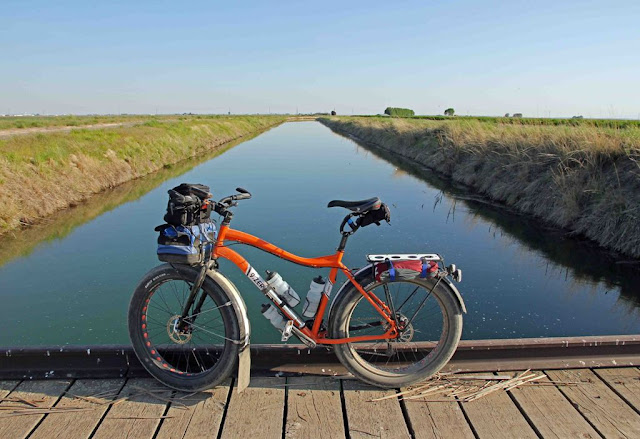 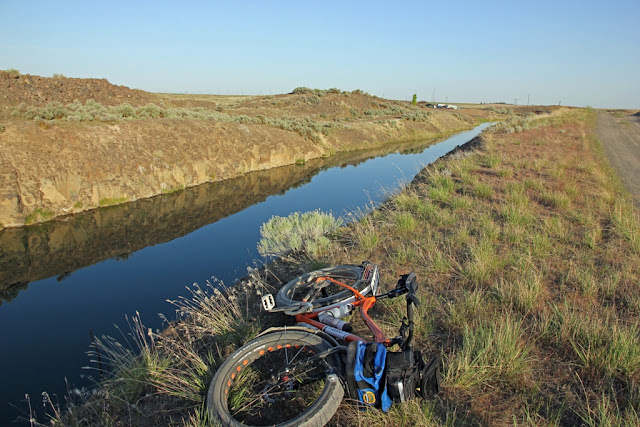 Blowing through a section of super-fine-powdery dirt . . . 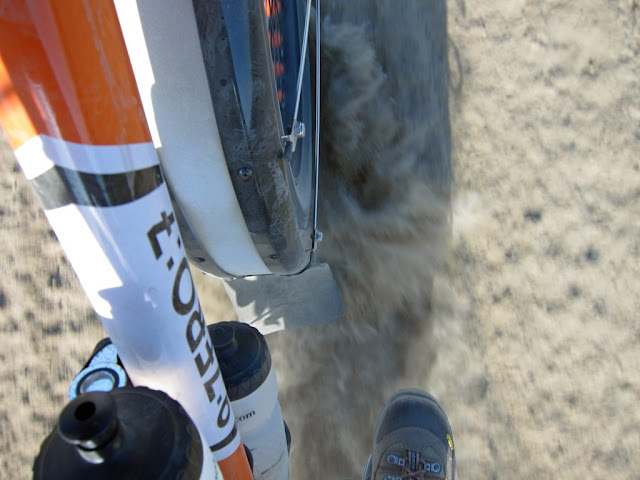 A mysterious preview regarding my rad new western hat, which looks even totally radder upon me, I shit you not . . . 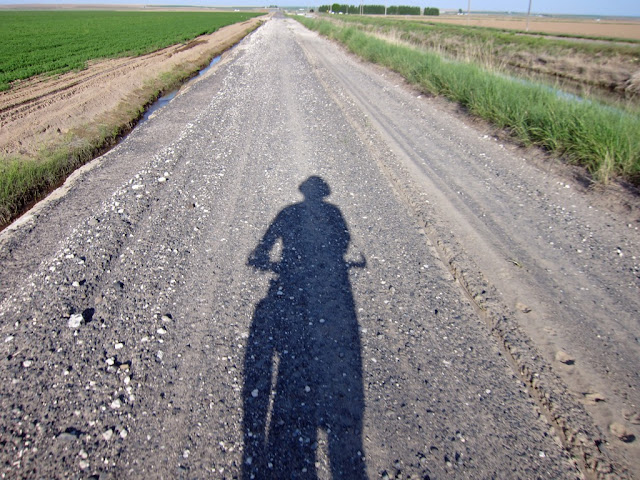 Airport security in these parts is pretty much non-existent. I could have ridden right down the middle of the runway, probably. And don't think I didn't consider it . . . 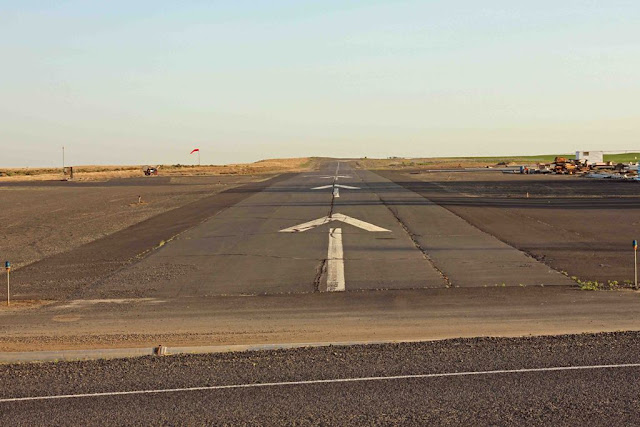 The second half of my recon was done hurriedly, by truck, under the threat of darkness, so there was no time for pics. But it proved out awesomely stunning and remote. All up, 32 miles of canal-side riding, 300+ miles of driving, and a totally consumed day. A bargain, in my mind, for turning most of one day's ride on the tour from something to put up with into something that stirs your soul.
Posted by Pat S at 12:33 AM

The green Slime tire sealant works against thorns; that would be worth a try if your tubes have removable valve cores.

mechBgon already beat me to it. Can you use that stuff in tires that huge?

I wonder what Surly would think if you emailed them. They might have some ideas.

When I rode around the Denver area I had thorn-proof tubes that seemed to work ok. Do they not make them for fat bike tires?

Folks getting on tubeless on the interwebs with the big tires.

You should consider using a tire liner to prevent flats.

Thanks for these awesome posts Pat. They have inspired my own Alpine adventures. Unfortunately I don't have your skills with the camera work. Keep them coming!

That's odd. Up north of your route just south of 262 is also part of the Columbia National Wildlife Refuge, but it isn't marked as such on the map.

Not that I have any firsthand experience with it, BUT

A guy I know who is at a fairly high level in 6 & 12 hour MTB races says that tubeless is much better at holding air with a thorn in it than is a tube. Apparently the sealant is magic, and he claims to only ever use his emergency tube when his tire gets cut open by a sharp rock or whatnot.

I'm really digging that strap. I carry zip-ties and also a two-sided velcro strap for my forays on the Gold Line bus into Stevens county. The Surly Nice Rack on the front of my Crosscheck requires that I put the bike on the rack backwards, and thus the front wheel needs to be secured. blah blah blah bike strap blah blah blah

Tom and Bryan, thanks for that idea - I'll definitely give it some consideration. And the liner idea too, Anon.

Jacque, I'd be all over a thorn-proof tube as an easy solution, they don't make anything like that in this size tube, that I'm aware of.

Mike and Andrew, tubeless is intriguing, but there's just not enough time left for me to try it out and debug it for my particular situation and be confident that it will do the job.

Stine, I know so little about the Gold Line and that is probably why it intrigues me so much. Would love to hear some of your tales about riding it sometime.

Sooooo. can you share your route bits on line? I'm planning on doing this in June of 2016. I'd love to use your route and not have to worry about detours. Did the DNR tell you about the detours or did you just come upon them yourself?

Thanks for all your work. Love the bike shot!

jno62, the route is HERE. It came about as a result of way too many late nights staring at google earth followed by physical recon. Good luck with your planning and trip.

Get professional trading signals sent to your cell phone every day.

Start following our signals today & profit up to 270% per day.