I'd already planned to cut out of work a little early today. Hooky is such a jaded term;  I consider it a worthy, if not critical, cause . . . I needed to get A-Wat's after-work ride club acquainted with the pump track.

And then I got a call. From Geoff, at Two Wheel Transit. My new bike had not only arrived, but had been built up and was ready to be united with me. This very afternoon! Bejeezuz, what to do.

Deliberations really didn't last that long: No other choice than to skim a few more minutes off my workday, pick up the bike, and still arrive at the pump sesh on time.  Thing is, the last item on the day's calendar was Skilly's meeting, and I did show up, and I cared (truly), and I wanted to see it through, but the long-winded dude just kept going. On and on and on. Meanwhile, my new bike was calling, no screaming, "COME AND GET ME!!!"  I finally succumbed and bailed.

I did pick up the bike and it's badass. It deserve's it's own post, which it shall have. Or four. It's that badass.

And we did finally assemble trackside. I bugled, via text, some of the regulars and John was also able to join us.  A-Wat, Skilly, Jason, John, and me were the cast that settled out, then. Game on.


You know how John's been talking about how his career transition has been messing with his head? Apparently he brought his aura with him.  Check out the pic below, if you don't believe me.


Skilly finally ended his long-winded meeting and showed up, ready to ride. Check out the supreme concentration. Awesome. 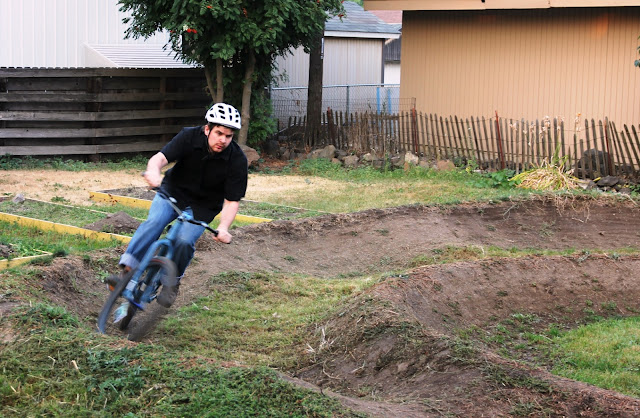 Somehow I missed getting any pictures of A-Wat, who as-of-late is sporting stitches in his forehead from his over-the-bars meeting with mother earth.  He pretty much came out of nowhere to tear up the track with his rad ax and then as suddenly as he had appeared, he was gone.

Meanwhile, Jason was about to win the award for best crash of the sesh.  See how his front tire is riding right on top of the berm? That's not such a good thing, when you're trying to generate sideways force. He and the stump ended up getting better acquainted and we shall leave it at that. 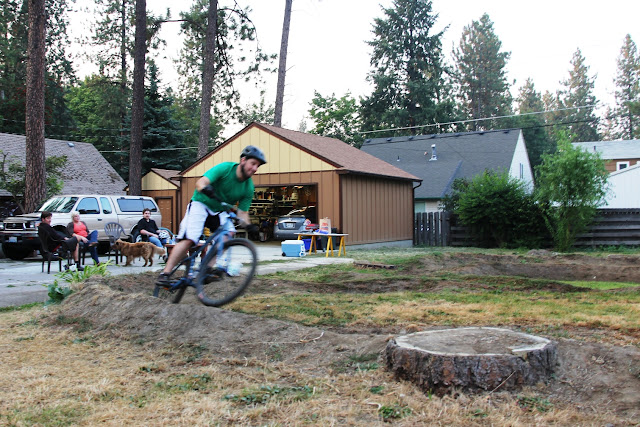 I totally love this next pic.  That's Jason's son, Aiden, on the stump.  Digging the ol' man, doing rad things on a bike.  Poor kid doesn't stand a chance . . . at 2-1/2, I'm afraid it's too late. This and probably many other similar images that Jason's exposed him to are burned into his psyche and he's doomed to live life as a bike nerd. 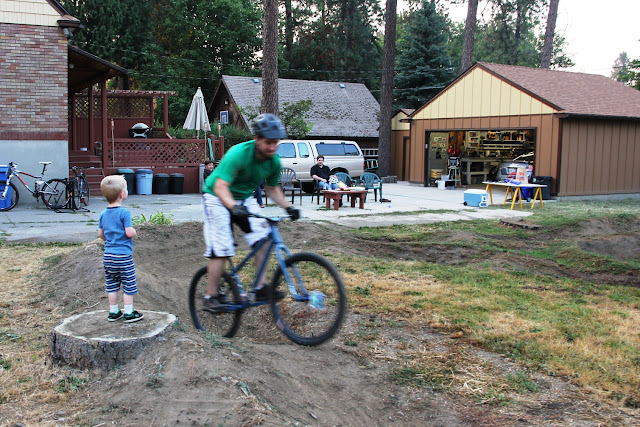 Other than that, it feels like Christmas. The only thing that could possibly make it more so would be an actual fire in the fireplace.

If I'm not mistaken, that new Trek is some sort of modern super trailbike analogous to my older but new-to-me Stumpjumper. I can vouch for the fun factor of such bikes, and I can't wait to see what sort of plans you've cooked up for it. Any rack plans? ;-)

FYI, mine came with a big pie plate that I quickly removed. Almost as cool as the reflectors Wade noted.

Q. Full-suspension or fat bike?
A. Both.

Methinks a 24-hour mountain bike race is in your future.

nice bike! I love my hard-tail bike, but after riding some of the rockier trails at Riverside Park I'm thinking those full-suspension outfits are onto something. I just checked my bike and I still have the rear reflector on it, even though my bro-in-law warned me against going out in public with the reflectors on.