I know I've said it before, but the pump track's days are numbered.

It's really weird, though . . . I'm not quite ready for it to die, and when it does, I want it to be with dignity. It's been a really rad backyard/neighborhood track. Somehow I've been motivated over the past few days to get out in my sparse spare time on the evenings/weekends and burn a few thousand calories moving and tamping dirt in an effort to reconfigure it into what will certainly be it's last reconfiguration. This latest, though, is kind of fun. John used his amazing bike-people-connector skills to pull together and organize tonight's sesh, and for that I am grateful. It was a great turnout, a class reunion of sorts. And don't even try to tell me that pump tracking is not a spectator sport. 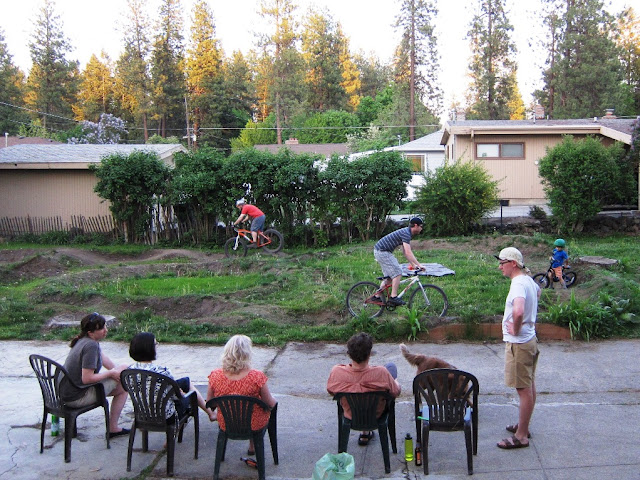 No kids were T-boned during this sesh, in case you were anticipating something horrific based on the pic. And yes, the fatbike got out and played, along with the other bikes, as you can see.

This track is so incredibly not what it was two years ago or even last year, when I envisioned and tried to maintain it as a finely groomed and aeshtetically pleasing yet bike-rad functional component of our landscape package.

Now it's just plain ratty, with this season's dandelion invasion contributing majorly to the decay. And there are berms that no longer make any sense and piles of dirt in the middle of nowhere.  Which is kind of liberating, for me certainly, and for it, I suspect.  In it's final weeks/days/months or whatever it turns out to be, all I care about is that it gets the piss ridden out of it, by anyone who wants to, while they can.

Man I wish I coulda made the class reunion. Alas, stars were not aligned. I will ride around on a few pot holes in spirit.

hmmm...I was just thinking that I haven't broken anything lately.