The planned route for Day Two was from Tekison Creek to Brushy Creek.  (Via ten gazillion feet of climbing at ridiculous grade angles.  But I digress.) 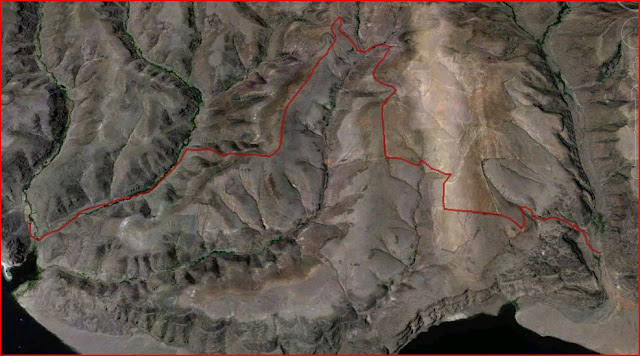 If we were lucky, our arrival might even coincide with one of these caught-on-satellite wild boat-people party events, in which case we could bathe in the river of tequila and rum that would surely be flowing and immerse ouselves in the no-holds-barred revelry.  And then in the morning, we could pile our hung over selves and gear into boats with our new BFF's and hitch rides back to Vantage via fossil-fuel-powered river travel.  Sweet!  (Hey, a guy can dream.) 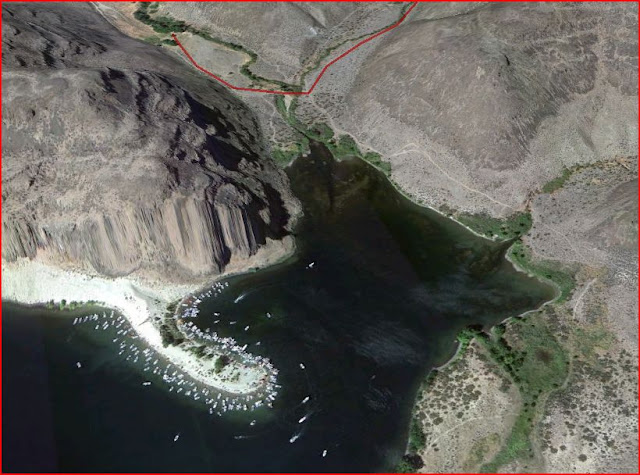 The Google Earth data shows that we started at about 600 feet, and topped out at around 1950 feet. We were out for 6 hours and 16 minutes and we travelled a mind-boggling 9.88 miles.  Our average speed was 1.6 mph and our max slope up was 30.8% and our max slope down was 36.3%.  What Google Earth does not show, is how many times per hour, on average, I swore to myself that, assuming I got out alive, I would never, ever, ever, do this again.

As the morning light emerged and Day Two began, snakes were still very much on our minds.  The inevitable business of "doing our morning business" would mean a lonely and terrifying excursion into the grass and brush for each of us, and an even more terrifying experience of the vulnerability of squatting with no way to protect or even know what was advancing against our white, fleshy backsides.  We all survived the experience, but I don't think that any of us will ever be quite the same.

We eventually broke camp and as we walked our bikes out onto the road, the first snake of the day appeared. Naturally.  But amazingly, this was the last snake we would see on the entire trip.  As quickly as they had imposed themselves upon us, they vanished. 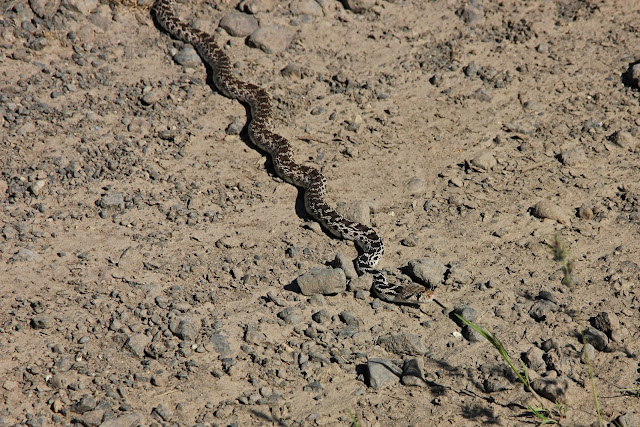 What we didn't know just yet, was that the challenge presented by the snakes would be replaced and surpassed with an environmental challenge that would become the theme of this second day ~~~ HEAT.

For the moment, though, it was good just to be back on the road.  We motored across the creek and headed uphill. 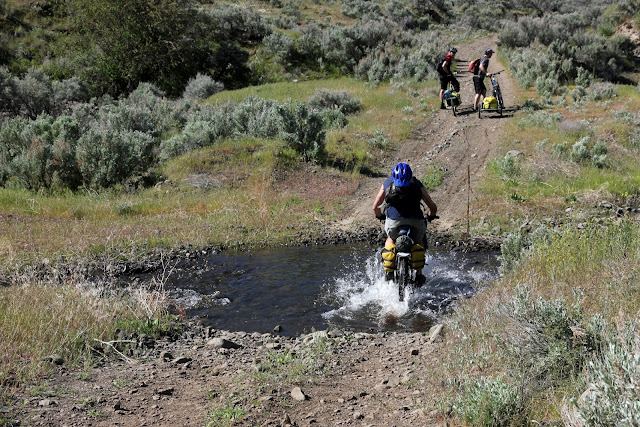 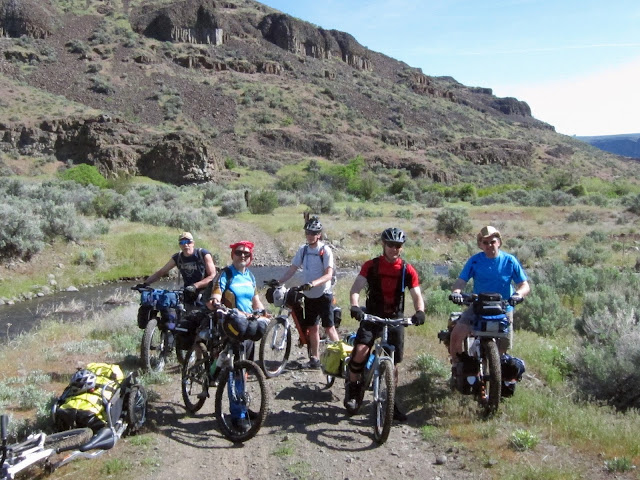 By "uphill", I'm talking about the ridiculous grades of up to 30% that I mentioned a minute ago.  That's Randy in the white, and Ward in the blue and then up the trail a bit is Joe, who NEVER walks his bike, walking his bike.  I can't speak for the other fellas, but much of this ascent, for me, was spent microanalzying every bit of gear I brought and why it was necessary to be hucking it up this insane slope, on this idiotic surface, on this increasingly stupid hot day. 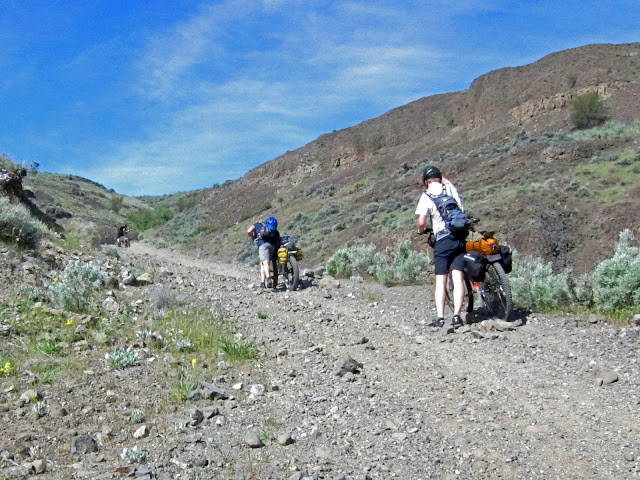 There is very little in the way of shade-generating vegetation (a.k.a. "trees") out in these here parts, and so when we did find a bit of this rare goodness, we drank it in.  Bike touring through the desert is super fun, as you can tell by the expressions on our faces. 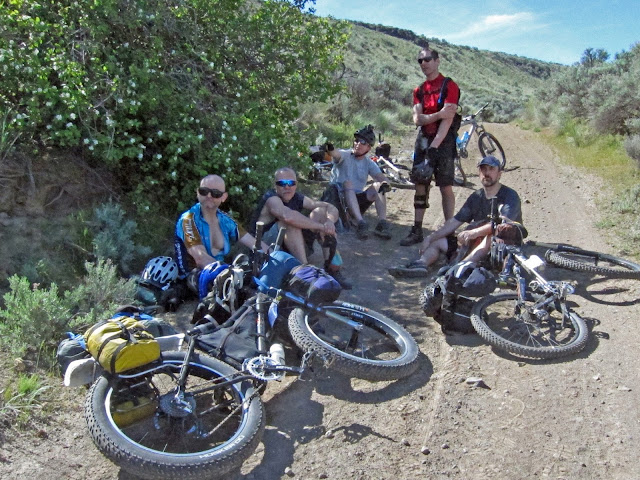 Some 2+ hours after leaving camp, we had climbed the 4 miles to the summit.  The trail was so steep that you were constantly blowing yourself up to make it through a technical section without getting off your bike, or maybe it was just so steep that you were blowing yourself up pushing your 85 lb beast up some loose, rocky shit.  The net effect was the same: Over the course of the climb, I had blown up and recovered so many times under a sun that I couldn't hide from on a day that was rapidly climbing into the mid-to-upper-80's, all while trapped in a body that just emerged from winter and hadn't had any chance to acclimate to any kind of warm weather, that I was feeling damned spent.

I looked at the road ahead and while it was scenically gorgeous, it was at the same time frightful from the perspective of constant exposure to the sun and the physical challenge that it promised to deliver.  Oy. 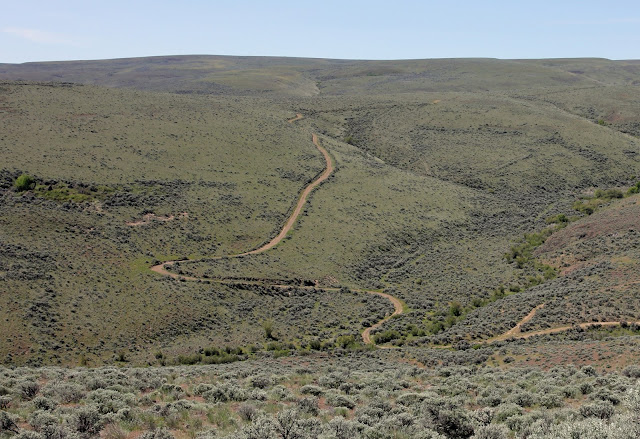 The crazy-ass wildflowers were just an integral part of the trip.  So rad. 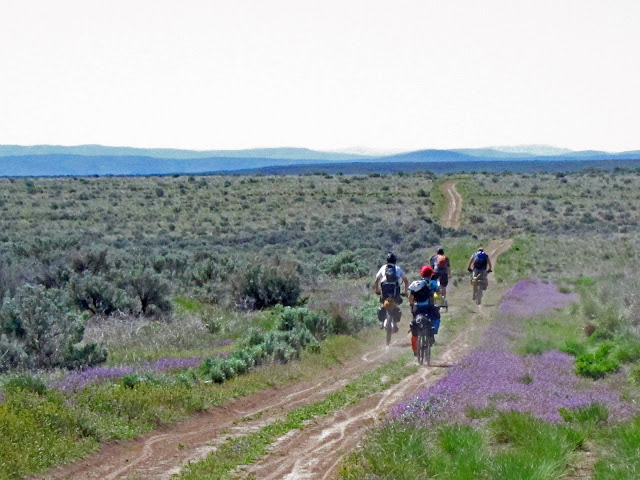 If you haven't yet concluded that we were genuinely travelling through the desert under the harshest of conditions, just have a look at Stu's garb.  You don't do this kind of thing unless you have to.  And it should also be said that not just anyone can pull this look off.  Stu's the man and I totally dig it. 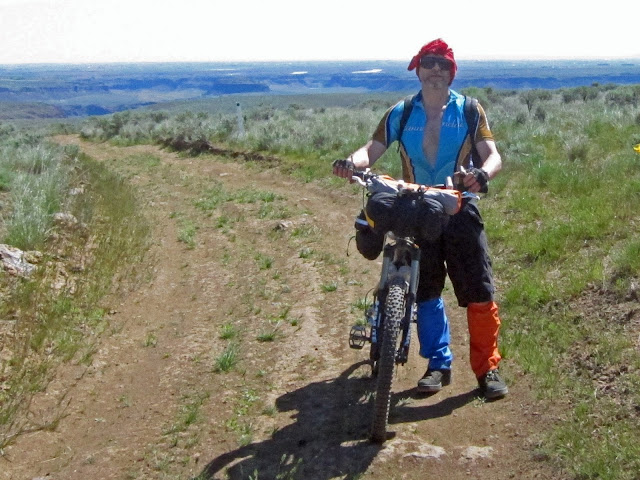 My five compadres, hammering into the midday sun . . . 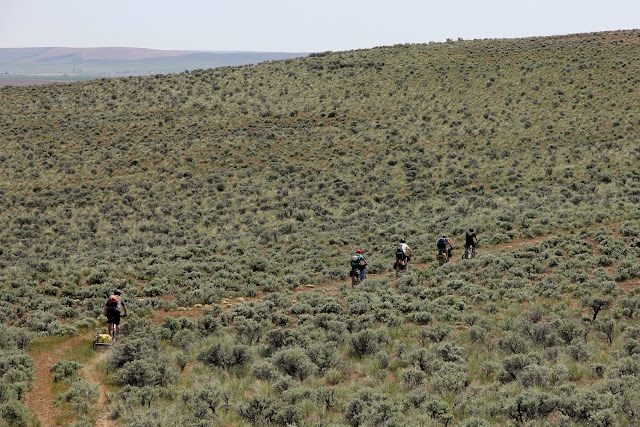 By the time we got to the bigass descent down into the Brushy Creek, I was pretty wasted.  I hadn't pee'd once all day and wouldn't, until around 8:00 that night.  I'd sweated every last molecule of salt out of my body and as a result, I was feeling a bit "unbalanced".  It's not like I had a choice of whether or not ot continue, though.  And so I did. 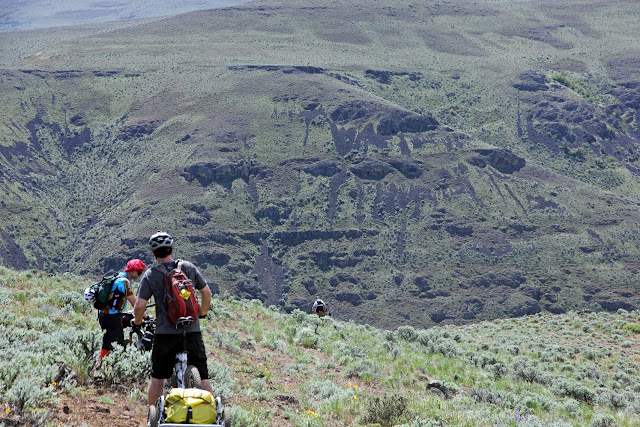 That strip of green vegetation was where we would be travelling, assuming we survived the death fall off the ridge . . . 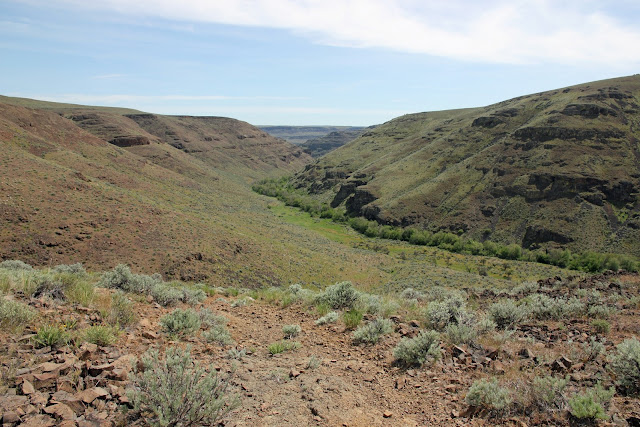 I was too involved in my own survival to take a bunch of dumbass pictures and so this next one is really the only one I have of the descent, which is a shame.  But this is where the 36.3% downslope happened, and as icing on the cake, it was this loose rock bullshit all the way down.  There were stairsteps and all kinds of craziness and for me, there was no riding, only walking, and I can state with utter conviction that after having wrestled an 85 lb bike through this garbage, that I have never worked harder on a bike while going downhill.  And there's not even a close second, let alone 22nd.

Joe's blown knee wouldn't let him walk without a lot of pain and jeopardy and so he rode most of it, although I have no idea how in the hell. 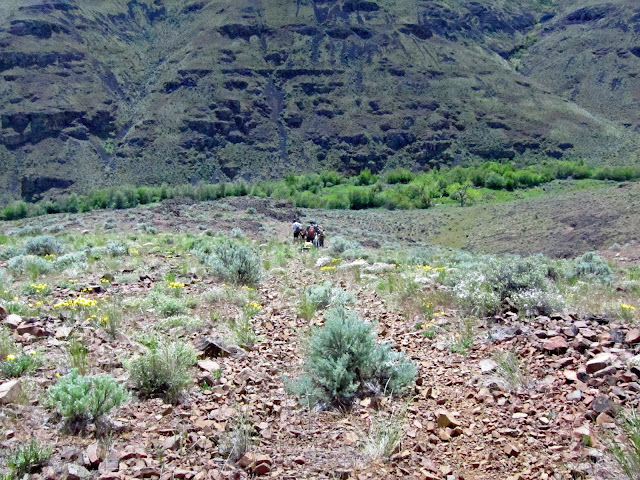 Just a badass rock formation that appeared on the way down, that is all . . . 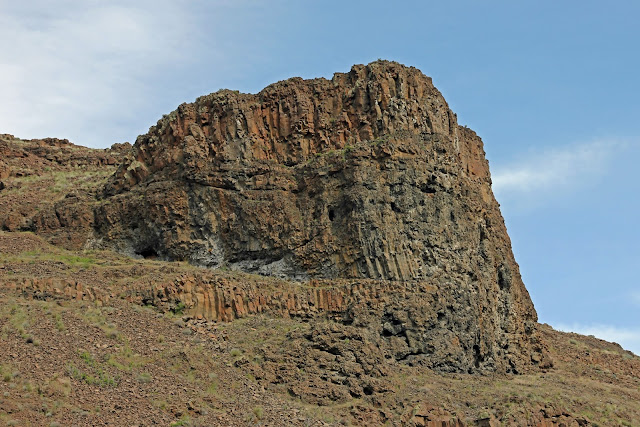 Based on what Ward and Randy had told us in preparation, we were quite apprehensive about the work it might take to navigate along the Brushy Creek.  Fortunately, because it was still relatively early in the season and because the wild turkey hunters had already been beating a path up and down the creek, it wasn't all that bad.  Yep, there was some hike-a-biking and creek crossing, and Stu had his second flat in here, but it was relatively okay. 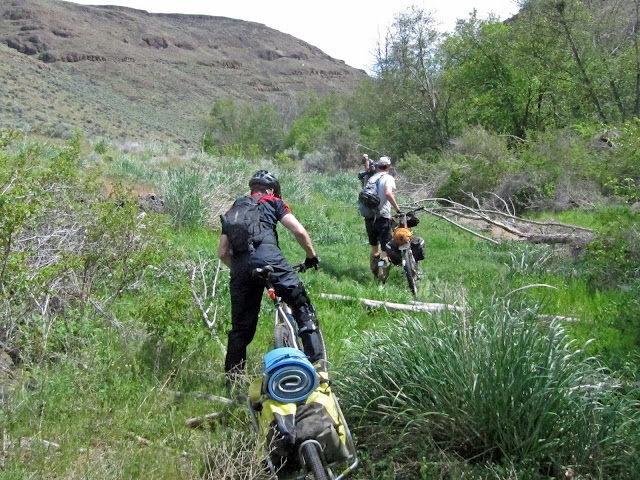 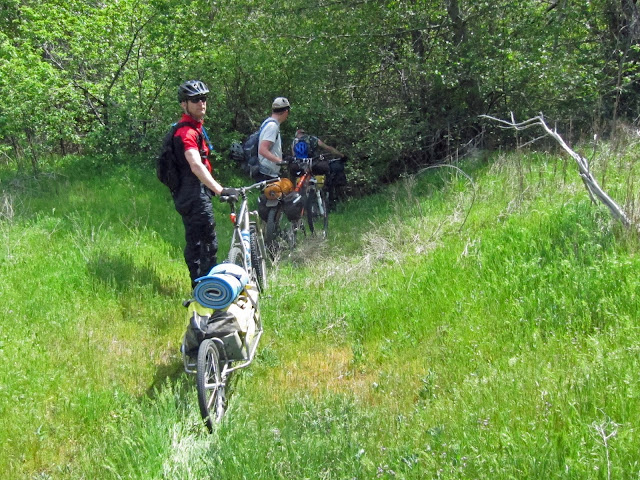 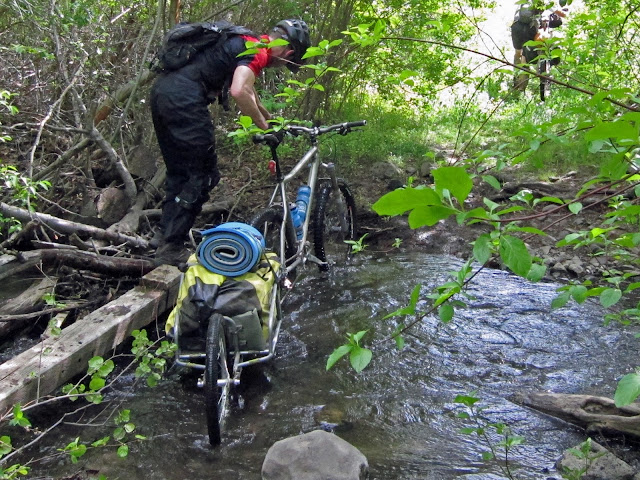 Ward and Randy, in their awesomeness, had reconned in a few weeks earlier, along with 11 cans of beer.  As trip hosts, their plan was to put them in a duffle bag along with some rocks, tie the bag off to a tree and drop them into the creek, so that when we all got there, we'd have a few cold beers to share.  That's just how rad these guys are.  It's exactly the roofing scene in Shawshank Redemption.

But in one of the weirdest coincidences in the history of the universe, two bike riders showed up at about the same time that Ward and Randy were planting the stash.  These, to hear Ward tell it, were older guys on older rigid MTB's, and they were true, 'bikepackers' in the sense that they were carrying pretty much nothing on their bikes and everything in bigtime real backpacks.  The 'weirdest coincidences' statement has to do with the fact that NO ONE rides bikes out here.  Until we met up with Megan and Steve at the end of Day Three, we hadn't seen a soul on the road.  (Well, we did see one guy in a truck, but he didn't count, 'cause he was in a truck. ;-)

So when we got to the bottom of the Brushy, Ward went to retrieive the duffel and the first thing he noticed was that the cord had been cut and re-tied.  Not good.  Then, when he go into the bag, he found that 7 of the beers had been stolen, and only four 16 oz PBR's had been spared.  Dirty, lowdown, mofu, beer-snob, THIEVES!  Whatya gonna do, though?  Such is life in the desert. 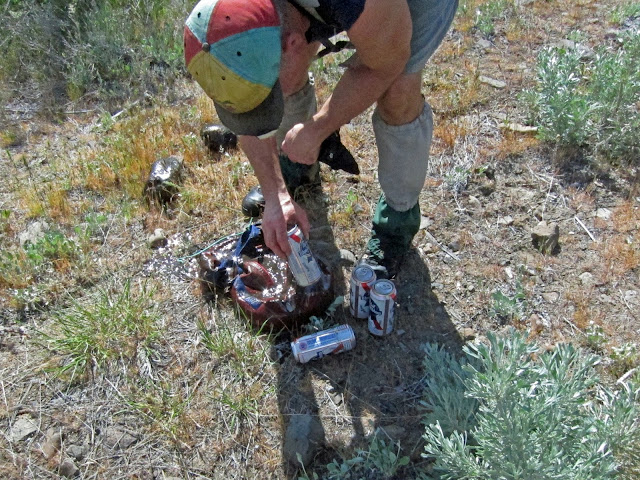 We finally arrived at our campsite in the Brushy canyon.  It was obvious that it had been a homestead at one point in time, as there were orchards and it was just too logical a place for a homesteader.  I will always think about how harsh our experience was out there on this relatively mild day and contrast that with the extreme days that anyone who lived out here would have had to deal with and just conclude that, holy living hell, whoever was homesteading out here was just pure badass. 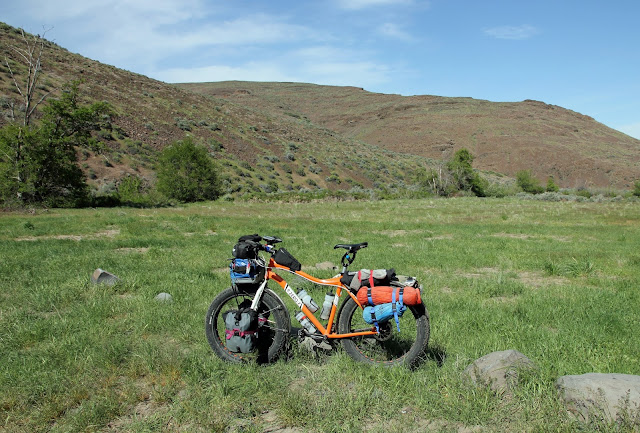 I had left my guts on the trail and my electrolytes on my hat and I was pretty messed up. 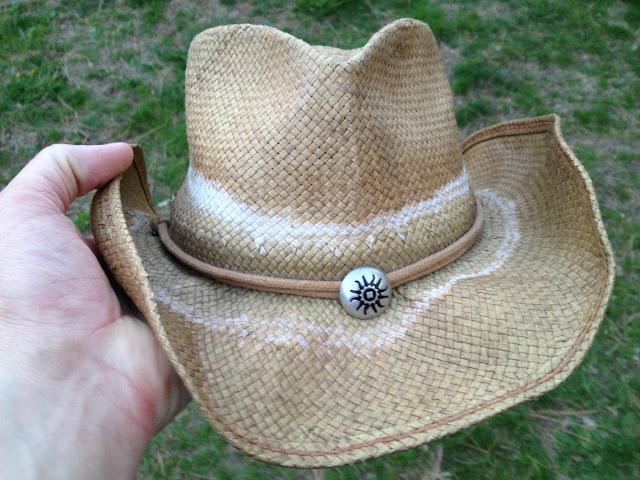 So what should have been a pretty amazing campsite vibe was pretty damned subdued.  It wasn't just me . . . everyone, I think, was feeling the toll of the day.  I crawled into my tent at 7:30.  I don't think anyone else was that far behind me.  I didn't think the low point of the day before could be topped, but apparently it had been. 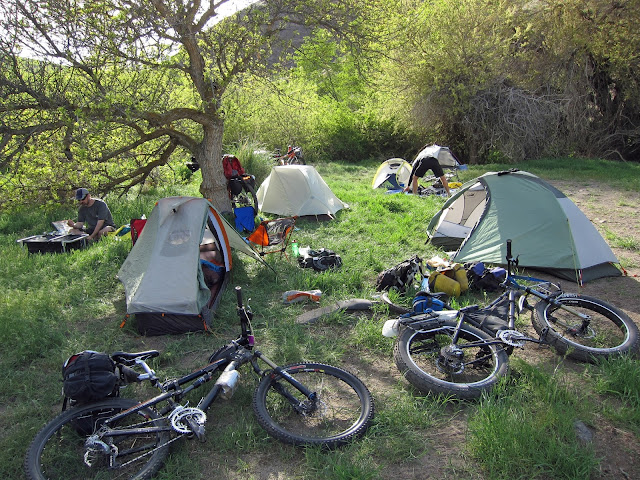 Good luck topping that one.

I'd say our writer succeeds if his Western narrative simply avoids the cliche of cannibalism.

"Having downed a precious last sip of PBR and shared a final ration of Luna Toasted Nuts 'n Cranberry, I repaired to the rattler-infested brush to perform my absolutions. I was surprised there by my companions, who stared at my exposed flesh with a barely disguised hunger."

UG. I've overheated long ago, so I have to be extra-double-plus careful these days. I also have stupidly low BP under normal circumstances.

All that to say... things things are my friend, you might want to check them out the next time you try to turn yourself into jerky out there...

Really enjoying your adventure and writing. But one question. What did you guys do for water? As hot and dry as it is out there you had to go through a lot of H2O.

Ok I should of read a little closer or waited until I had my second cup of coffee before I add a comment. So for water you to directly out of the river so you must have had a good filtration system with you.

hey nice write up and pics. what, only 85lbs bike?