The planned route for Day One was from our starting spot at the Washinton Department of Fish and Wildlife office on the north edge of the Colockum Wildlife Area, to our campground at Tekison Creek, a.k.a. "Rattlesnake Bay" (stay tuned).


The travel plan, in general, was the same as it would be for each of the four days of this trip:  Start out near river level, climb our asses off until we were way the hell up on some gawd-forsaken, wind-swept ridge, and then descend back down to near river level.  The plan was what it was because it was the only way it could be, really; we were traversing a totally badass section of ridges and valleys and you can't just effing ride straight up or straight down cliffs. In short. So you take the roads (and I use the term loosely) that exist because of some amazing collective human effort that has spanned who knows how many years and involved who knows how many people, or groups of people, to put them there to do exactly what we were trying to do, I think, which is to travel overland along the river in the most efficient manner possible.  Which is not very effiecient.  Because the terrain doesn't particularly lend itself to efficiency.

The other part of the low-to-high-to-low pattern of movement is that it's the desert (and honestly, it is), and you need water, badly, and it's damn hard to find it at the higher elevations.  So it's best to start and end the day's travel at the bottom of a drainage, where you have an ample supply of this magical fluid.

Google Earth delivers some amazing data, and even if you click for big I'm not sure it will be totally readable, but the red line with the orange underneath it is the elevation profile and the dark blue line with the purple underneath it is the speed at which we were travelling.  It shows that we were frequently travelling under 5 mph, and mostly travelling between 5 and 10 on the way up and between 10 and 15 on the way down.  We had a max slope up of 18% and a max slope down of 19%.  We went 17.5 miles and it took us 5 hours and 17 minutes.  Holy hell.

I've gotten kind of ahead of myself, though.  Let's start at the beginning of this first day . . .

Joe and I left Spokane at around 7:30 and arrived in Vantage on schedule at about 10:00.  Ward was waiting for us. 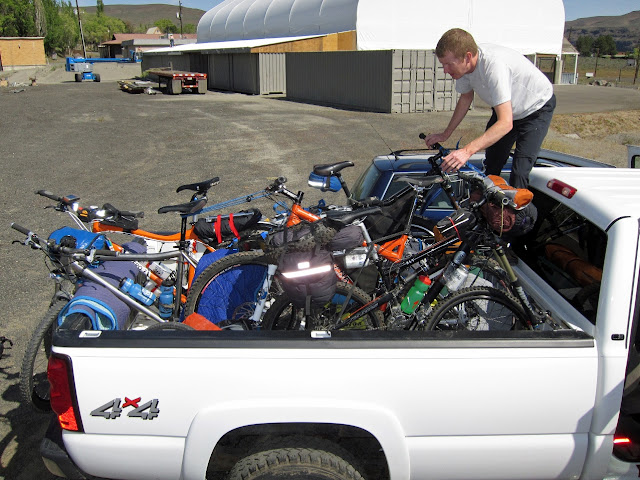 We arrived at the Dept of Fish and Wildlife office/shop complex and embarked upon the task of putting together our "equipment packages".  This scene would have made the most stoic bike nerd blush.  It was a relatively brief period of time in the hyper nerdism realm.  But it was a good thing.  To be clear.


Everyone headed out on the trail, while I hung back to take a pic. What was immediately evident was how small we were against the backdrop of this big, bold place . . . 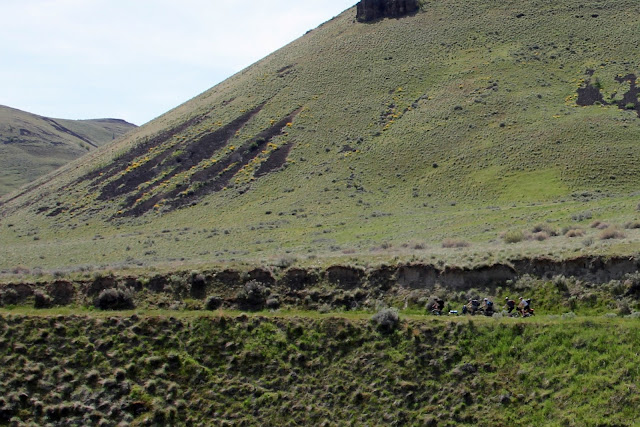 The climb was steady and continuous and it wouldn't be long before we would start to experience some spectacular views of the valley floor . . . 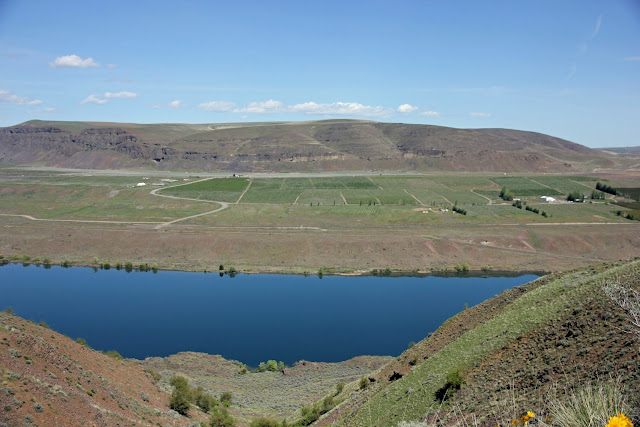 It would also not be long before our so-so road surface began to turn much krappier . . . 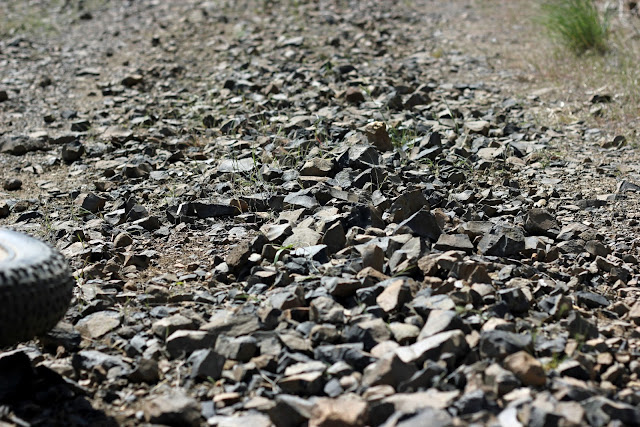 A coupla gates needed to be crossed and let me tell you that after the first, no one particularly wanted to be my friend when we hit the second.  It could have had something to do with my 85 lb loaded fatbike, but I am not sure. 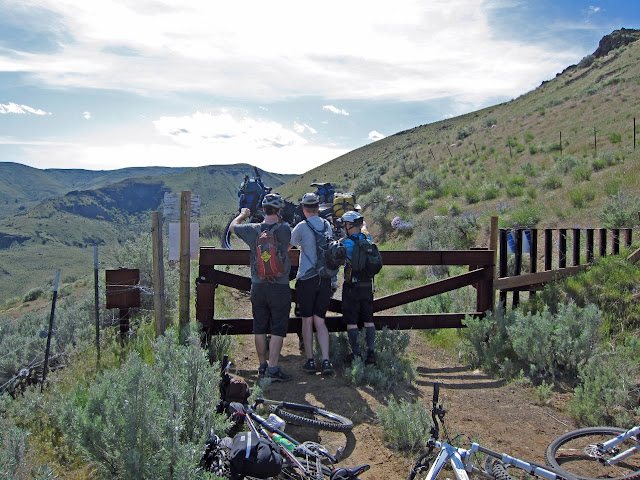 So at this point, I guess, we were still a little giddy.  But we were also working our asses of and the reality of the harshness of the terrain and what we were heading into was starting to set in, a little.  Things were about to quickly get more serious though, and in fact, the overriding theme of this entire first day was about to emerge:  Snakes.  Rattlesnakes, to be specific.

Look, I don't care for snakes much, and I had some pretty sleepless nights in front of last year's tour across the state on the John Wayne Pioneer Trail, but in my more rational and sane moments, I recognize that the probability of encountering one is actually pretty low and that my head is my worst enemy.

At the same time, a person has to acknowledge and come to terms with the fact, on some subconscious level at least, that when travelling through the desert, he's among snakes, whether he sees them or not.  And when we saw our first bull snake, just after the gate, said person was forced to come to grips with the fact on  a conscious level.

"Bull snake.  Big whoop.", I bravadoed, internally.  But the edge had been set and I was on some level of alert, although I'm not sure what color.  I am sure that it wasn't just me, though.

A few hundred feet of climbing later, as I was crossing some standing water on the sun-warmed road, something moved, and then RATTLED!!! directly underneath my pedals!  My already ragged heartrate pegged hard and I let out some spontaneous and uncontrollable girl noises.  Joe was right behind me and before he could figure out what the hell I was spazzing about, he ran over it with all three of his wheels - the two on his bike and the one on his trailer.  The snake quickly moved off into the rocks on the side of the road, appeared injured, and sat there rattling.  I grabbed my camera and approched to take a picture, until Joe insisted that I was a total dumbass.  I had a hard time arguing the point, so I backed away.

We warned the others coming up behind us about the snake and then we all headed on up the trail.

The mood had abruptly changed; this gig was for real.  We found some shade and stopped to take in some fuel.  It was good to rest, but it wasn't a super joyous event.  Everyone would now be paying a lot more attention to the road and a lot less attention to the rad scenery. 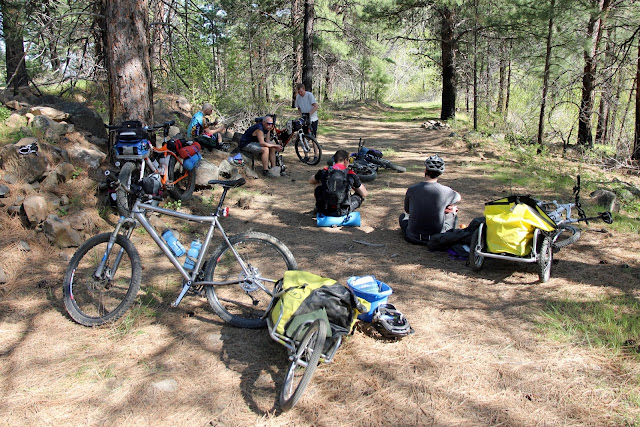 That said, it was impossible to completely ignore the scenery. 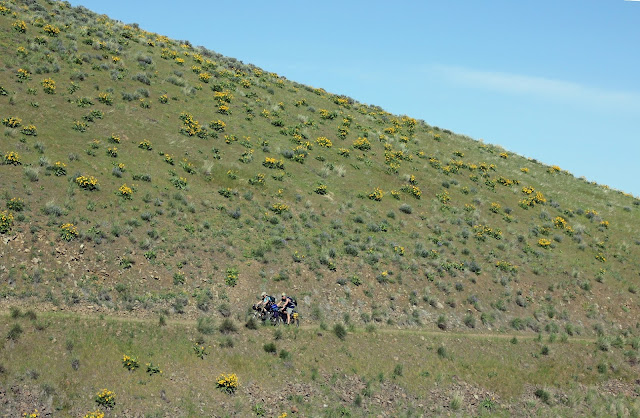 It was somewhere-sort-of-but-not-really-near the top of the climb that Stu had his first flat of the trip.  After making the repair, I got out my pump and mentioned that in the course of filling a fatbike tire with air, I had to put in "400 strokes".  The juvenile minds that I was travelling with latched on and had a field day with this theme, and yucked it the hell up.  "I'm usually asleep by the time I hit 150", that sort of thing.  I have to admit, I was laughing just as hard.  Whistling through the graveyard, I suppose. 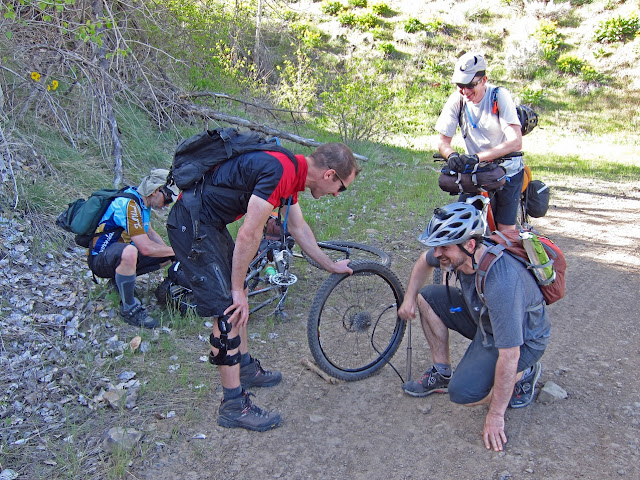 The wildflowers were out, all trip long. 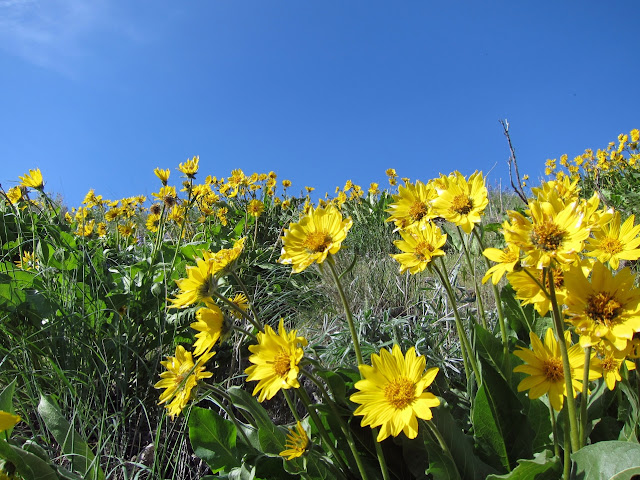 We were finally getting close to the top, which was both good and bad.  If anyone wanted to turn around now, it was a do-able coast\ride back to the parking lot.  You could be there well before dark and call this whole deal a lapse in judgement and rejoin civilization and leave it at that.  If you forged ahead though, you would be plunging into the next valley, making a quick, convenient escape impossible.  If I had know then what I was about to know within the next coupla hours, I might have gone for it.  But I was still in denial, apparently.

This was my only ungulate sighting of the trip.  Which suprised the hell outta me.  I sure spent a lotta time wading through their poop.  But they had mostly departed for higher elevations, I think. 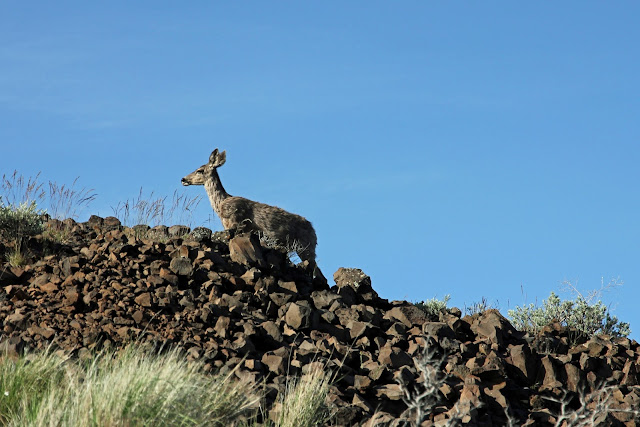 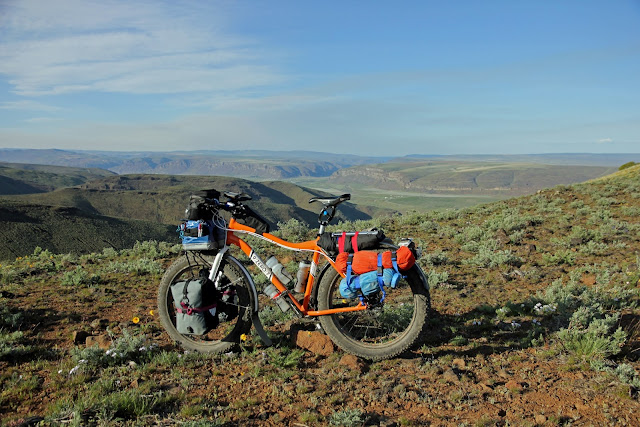 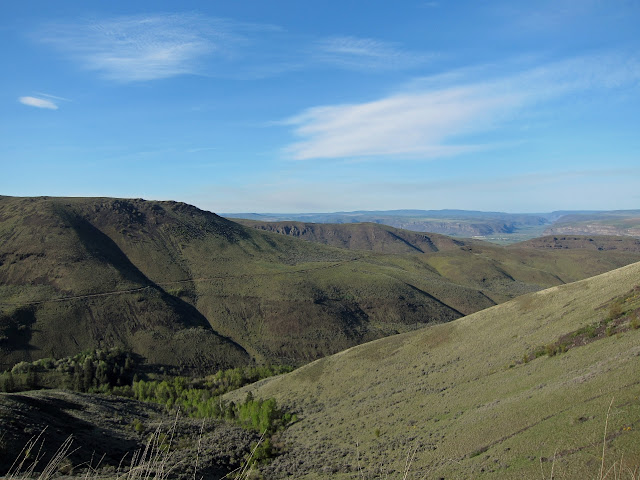 The descent had finally begun and it was certainly good to be rolling downhill. 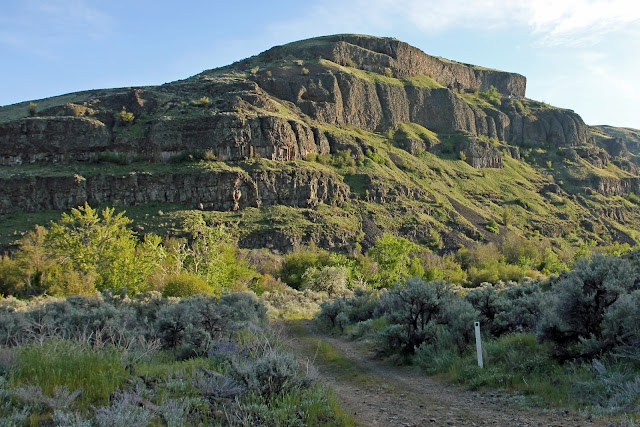 The rock formations in the evening light can be spectacular. And we had kind of written off the snakes, because we hadn't had to deal with them for the last few miles. Until:

We were bombing through a brushy section of trail and the rattlers started going off all the hell around us.  It was not just a snake here and one there, it was some freaky gathering and they were pissed and they were right there off the side of the trail, just loud as hell.  We all got through this section of whatever the hell had just happened and we were talking about standardizing hand signals to point out rattlers to the riders behind us, but we were ignoring the elephant in the room, which was that it was getting dark and we had just dropped several hundred feet off of a ridge into the valley of death.  It was kind of somber, let me tell you. 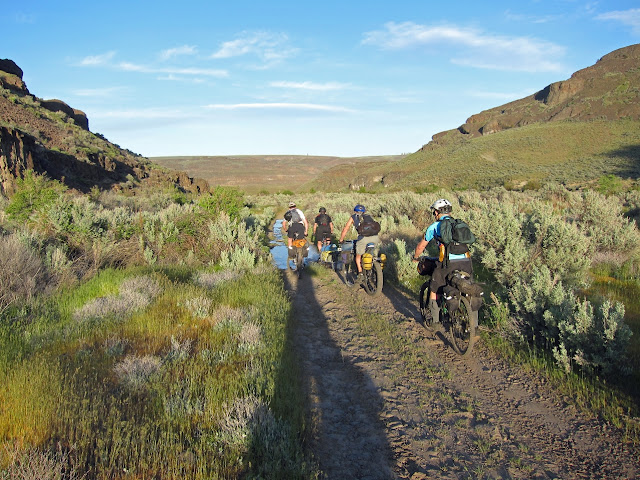 Stu's crossing the creek here and just on the other side, is where we would be camping for the night, and the rest of us are standing there, looking at a baby rattlesnake in the middle of the road.  Holy living hell. 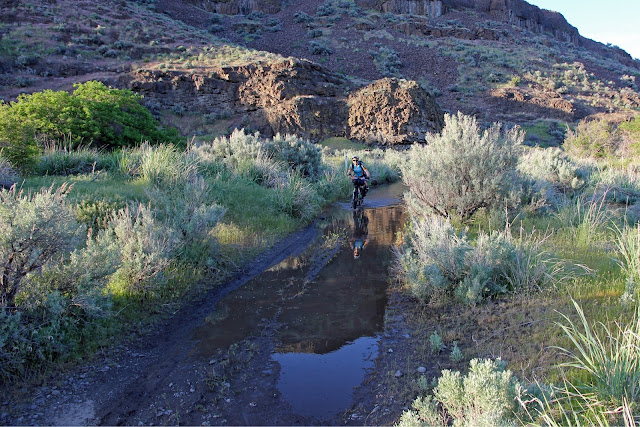 The end of the red line is where we stopped for the night.  Trust me when I tell you we talked about our options.  But the light was fading fast and any alternate plan involved travelling in darkness.  This image was taken at a much drier time of year, because the creek was flowing and the area to the south of the line was green-grassy.  Which is a scary place for snakes to hide.  We beat it with sticks and cut it down with our bare hands and huddled our tents together like sissies.  Whatever it takes to survive. 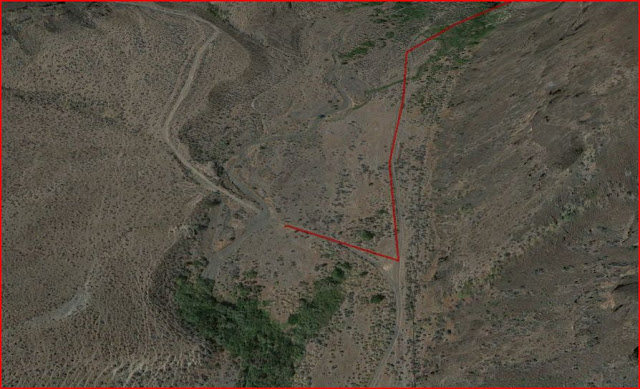 The thought, however delusional, that we had driven off the snakes and claimed this small parcel as our own eventually began to take hold, and we began to relax, just a bit.  Some liquid courage that we'd packed may have aided our cause.  A full moon rose over the ridge and illuminated the walls of our canyon and the evening was as fantastical as it was frightful.  I don't think I'll ever forget it. 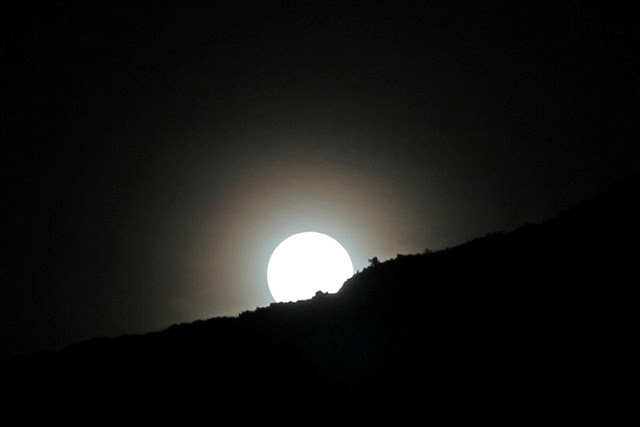 Ward, in one of the most momentous acts of the entire trip, cooked up some gourmet grilled cheese sandwiches and passed them around. Oh. Hell. Yeah.  The ultimate comfort food. 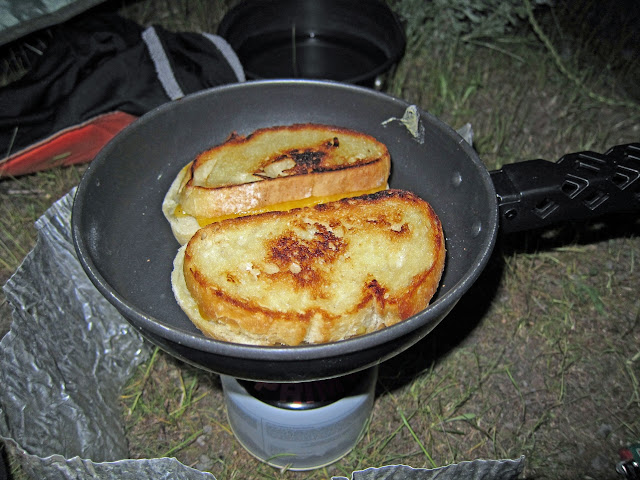 I had no idea how I was gonna have the mental strength to make it through three more days of snake terror.  Turns out that tomorrow would get even worse, but not because of snakes.
Posted by Pat S at 11:09 PM

quite the beginning to your adventure, can't wait for the second installment.

Drooling for the next chapter as well. :D

As you blithely state that you "don't care for snakes much", I more freely admit that they generate autonomic fear/dread in me. Without knowing what the next three days of your journey held, I congratulate you for making it through.

Ooh, a cliffhanger. What happens next!