On The Topic Of Care And Feeding

Back in the day, before PETA ruled the world, you used to "own" your pet.  Now, they are adopted, I guess, or some even more enlightened concept that I haven't kept up with and am therefore not in tune with.  But despite PETA, anyone who is normal and even moderately compassionate towards animals, which I like to think is the majority of us, sort of understands that they kind of own you more than you own them.  They have needs and you're basically the mommy or the daddy, and it's up to you to do the right thing, and you acknowledge and accept the responsibility.

Two springs ago, I thought I could "own" a pump track.  Easy peasy, right?.  Come to find out, "adopting" one is quite akin to pet ownership.  They don't exactly take care of themselves.  They have needs.  They have to be taken care of, or they become a pain in the ass, by letting you know that they are being ignored.  In no uncertain terms.

Getting out from under the responsibility that you have accepted is easier with a pump track than it is with a pet, but only slightly.  I'm apparently not ready, as I have once again thrown myself fully into the care and feeding of my pump track over the last several days, sinking valuable hours that can never be recovered into the painful activities of moving dirt and yes, tamping. Oy.

The new and improved track became rideable tonight for the first time and although it needs to be fine-tuned, it's pretty rad.  I don't understand, at all, why I have not yet decided to return it to the humane society and move on with my life, post pump track style.  I guess it's just a deep-seeded need to nurture this beast that I have created.  I think this process is in its twilight.  But I have thought that before.  Who really knows?  Not me, that is for sure. 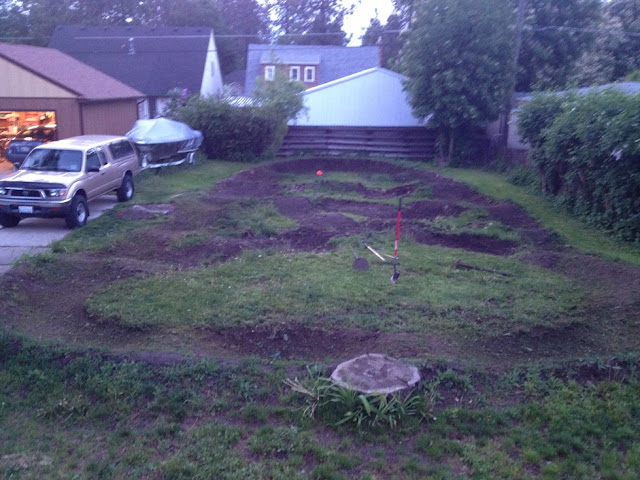 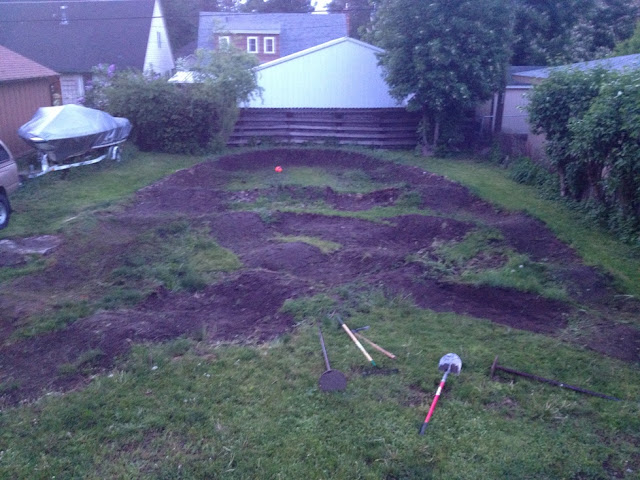 It looks sort of like a war zone, I know. I could have gotten the big ladder out for these pics, which would have provided a much better overview of what it now is, but I got the small ladder out instead. Which I think, means that I have established boundaries on yours and mine blog love. I do love you, but there are limits, in simple speak. All this aside, and point being, the track is now actually a perimeter loop, along with a pretty badass figure eight in the middle, with lots of new bumps.  It flows pretty well, preliminarily. It will get way better as it gets dialed in.

If for no other reason, keep the track around for me.
I live vicariously through your pumptrack and will one day pass through your neck of the woods and I sincerely hope to spend an evening ripping around on the fruits of your labor.
Now is not the time for my pumptrack, but someday . . .

and you are welcome to come by and ride anytime.

It would be a pleasure to have you stop by and ride. The gate is always open . . .