Ahh.  The balance of Day Three then, at long last.

From our comfortable and superior perch atop the world, windy as it was, we would once again be heading into the bowels of another canyon.  Nothing good lasts forever. That descent was a rough and rocky one, which kept my hands on the bars and off the camera.  It was a brake-lever-cramped-hands-pick-your-way-down affair, as opposed to the swoopy-flowing-smooth-as-silk-nirvana-esque drop that we all deserved after that nasty bitch of a climb.  Earth Mother had picked our pockets, again.

We did finally end our free-fall in this sweet meadow at the bottom of the canyon.  I would commit my first bike-blogger-on-tour crime of the day by not taking a decent picture of it.  But trust me when I tell you that it was super sweet and that it seriously conjured conjecture about its potential as a base camp site for some future adventure in the C/Q.  Hmmmm.

Tempering the infatuation, however, was this stark realization that another, more powerful kind of bike, had died here.  And that we might perish as well, lest we keep moving. 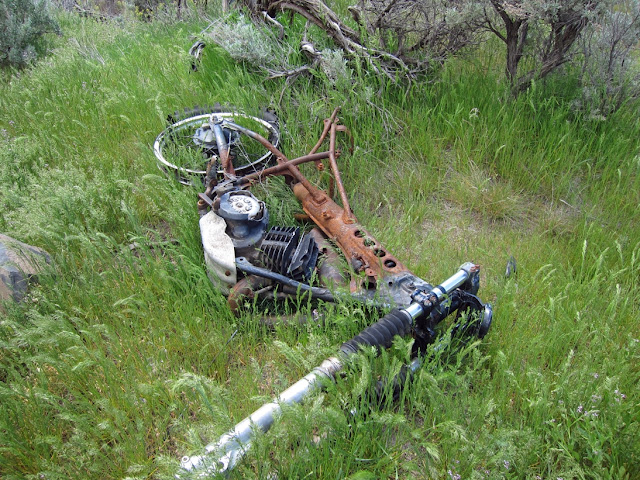 Excuse me, but is this what I signed up for???  Shite.  The second big climb of the day, and steep as hell.  No one was riding up this krap.  I contemplated confronting Ward and demanding a refund for this all-expenses-paid tour, but even amidst the harshness of the midday sun and my resultant bone-dry-body and withering will, I was still barely sharp enough to realize that even if I was majorly persuasive, I would be entitled to the exact amount of my entry fee.  Which was exactly nothing. 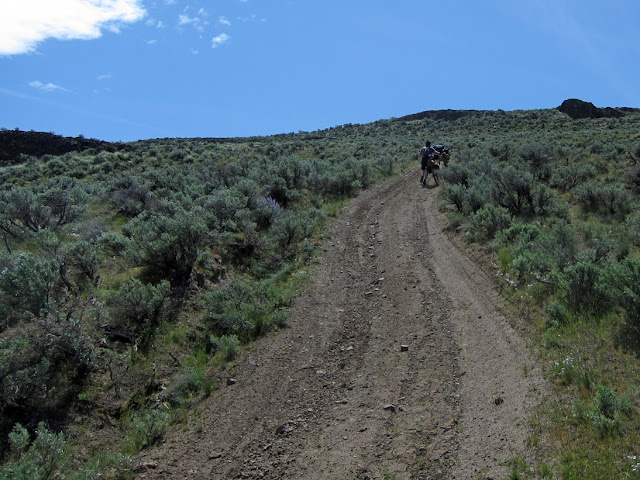 We arrived atop the world again shortly thereafter (if you call another hour of climbing "shortly").  We'd been battling, in additon to the climbing, a headwind all day.  We'd known the wind was coming, on or about this day, based on weather reports before we'd left.  And so we were kind of apprehensive, and for good reason: it was starting to get real. 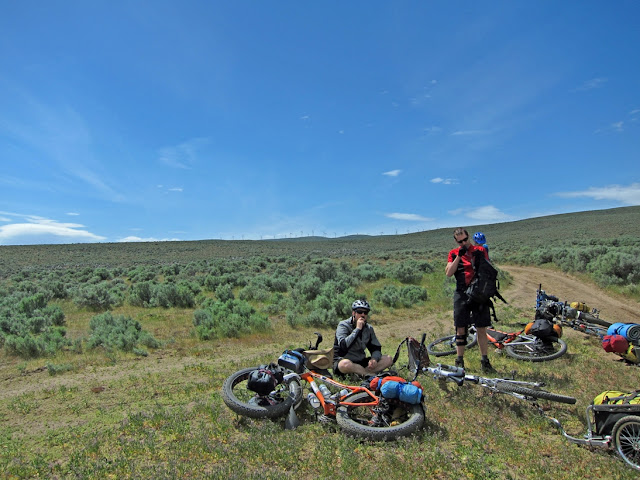 Still pics don't show wind, but trust me when I tell you it was a windy mother up top.  It's part of the deal, and the reason why they spend millions of dollars building wind farms up here.  But still.

And then it freaking happened:  We zigged, in accordance with the planned route, and the wind was at our backs!  Holy living hell.  When you stop pedalling and subsequently accelerate, you finally understand why you were born to ride a bike.  It's how it should be, all the time, and how I imagine it will be in heaven, assuming I get there, somehow.  Which is a stretch, I admit.

But the deal was, we were about to basically ride a ridge from where we were at, down a long and gradual descent, on some relatively damn fine roads, with a massive tailwind at our backs, until we reached our destination at Whiskey Dick bay.  So heaven on earth, pretty much. 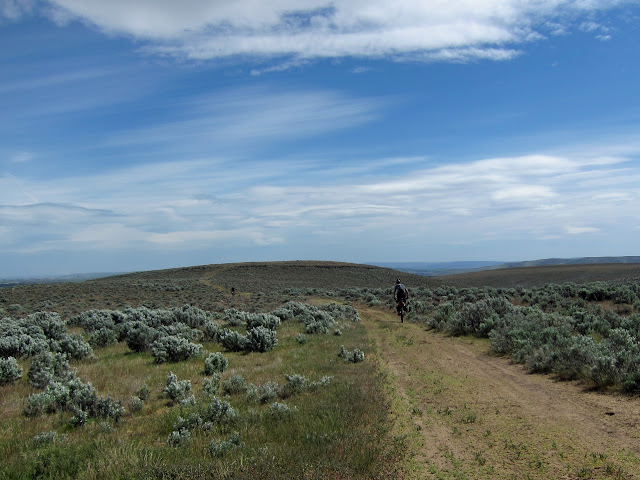 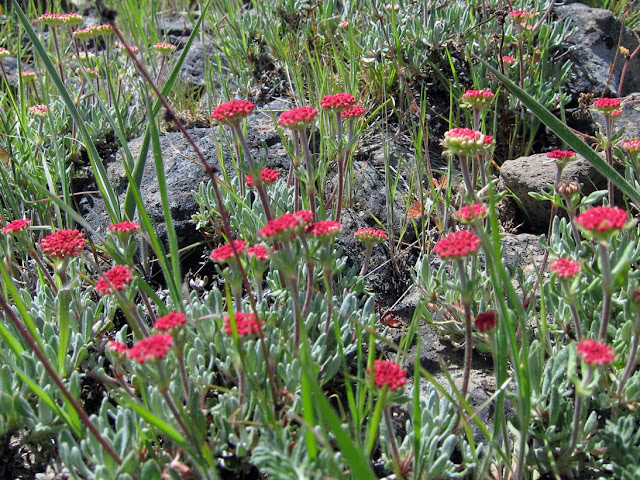 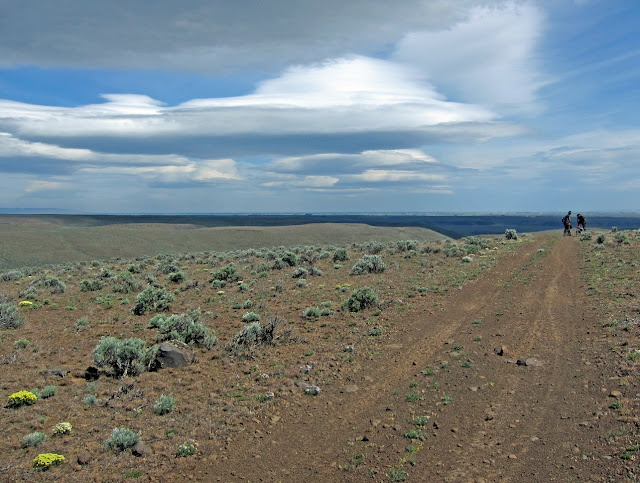 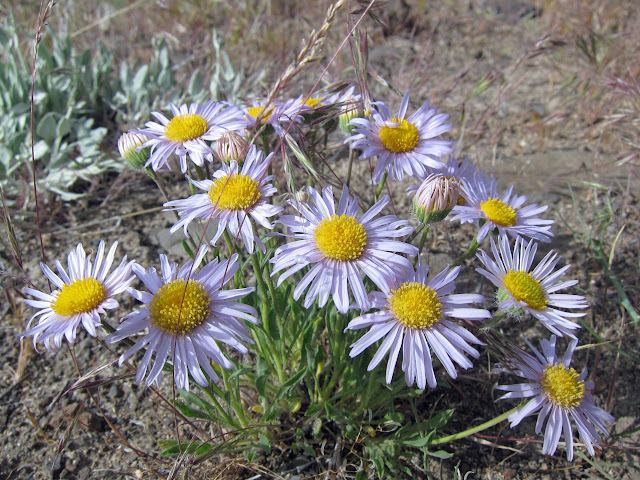 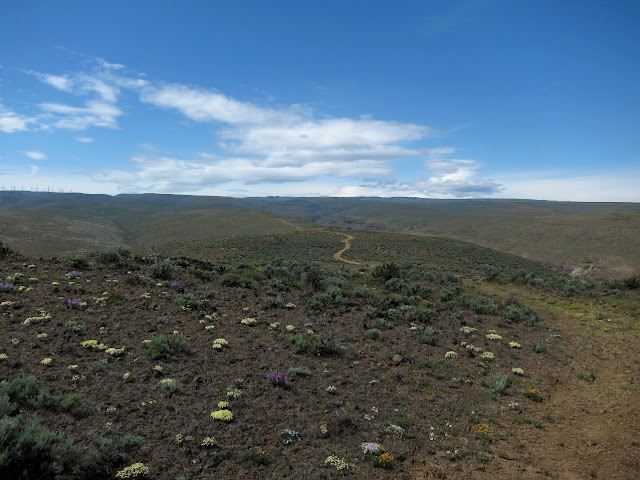 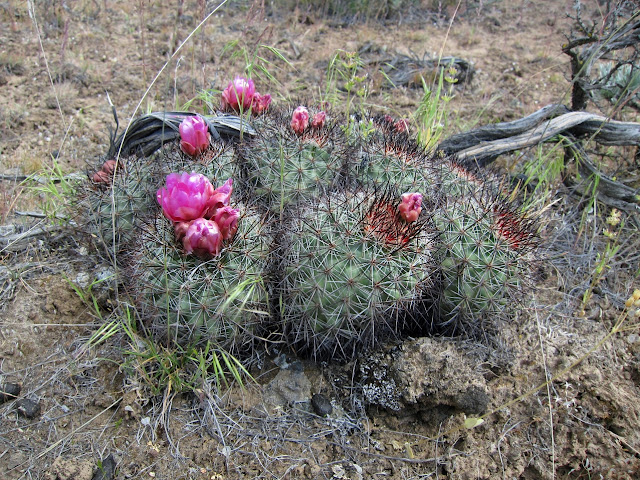 We finally got to the end of the ridge and the point where we would be dropping off the edge and descending down to the bay.  There was this one small detail concerning whether we were on the right road and whether we might possibly be dropping down into some dead end that we might have to climb back out of, if we were wrong.  Based on the energy we'd already expended and what was left in in the tank at this point, this would not have been a good thing.  At all.  So we chose not to think about it.  When all else fails, one must proceed with confidence.  Here I am, getting ready to get on down with my bad self . . . 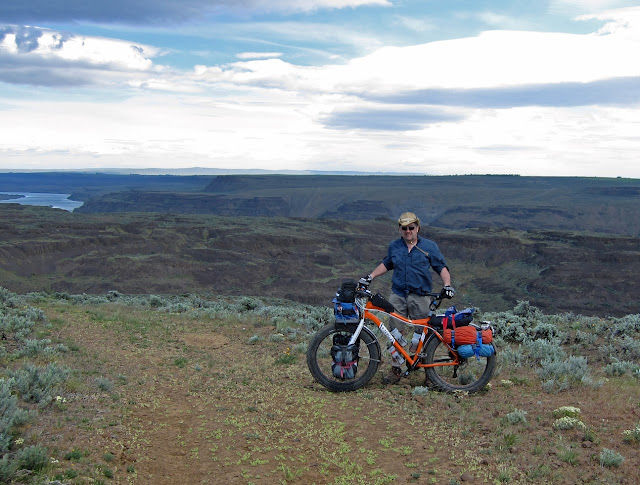 During said descent, I would commit my second bike-blogger-on-tour crime of the day by not taking a picture of Steve and Megan (a.k.a. the "Beer Fairies"), when we met them on the trail.

It was a big deal and here's why:  We had seen exactly one person during our entire tour, and that guy didn't count, since he had been in a truck, 4-wheeling down to Brushy Creek.  And then it happened: We ran head on into Steve and Megan, who had ridden reverse-course from Vantage with among other things, a soft-side cooler filled with beer on ice, and had scoped out and then secured a badass campsite, and then ridden up the road to meet us.

So the beer and the campsite were huge.  But what was even huger, if that is indeed a word, was the realization that we were gonna live through this thing . . . Steve and Meg were our tickets out!

The drop down to the bay was about as wonderful as things can get, on a bike. 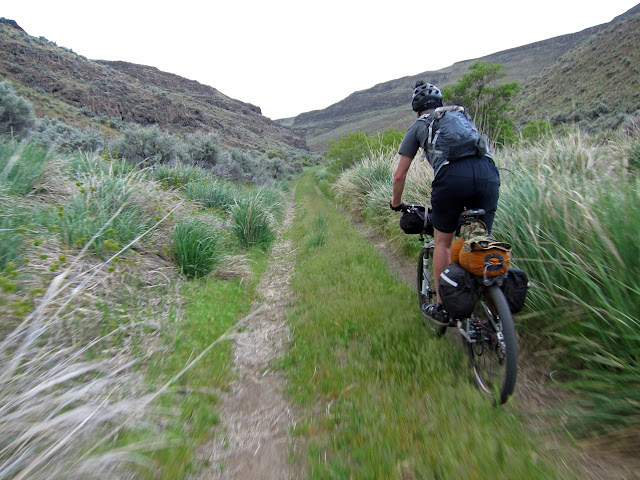 Even the creek crossings were a joy, for we knew that we were gonna make it. 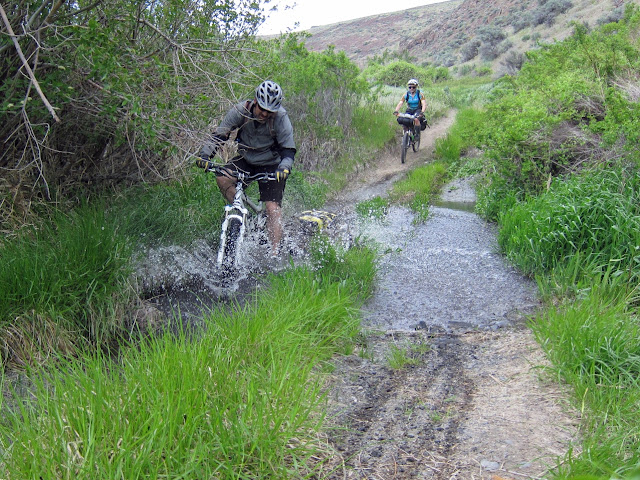 Steve and Megan.  And now you know why we call them the beer fairies . . . 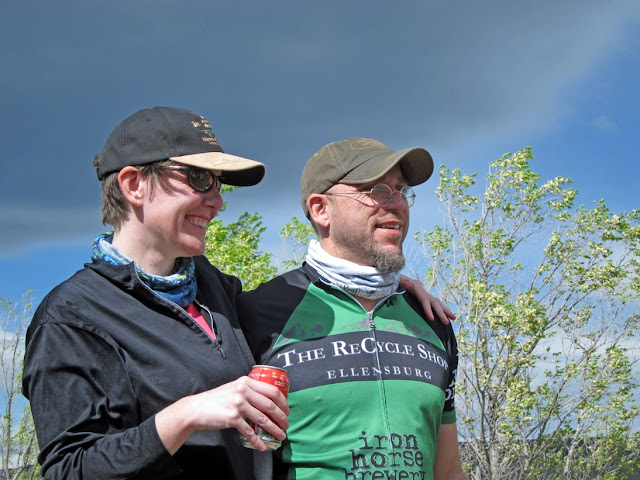 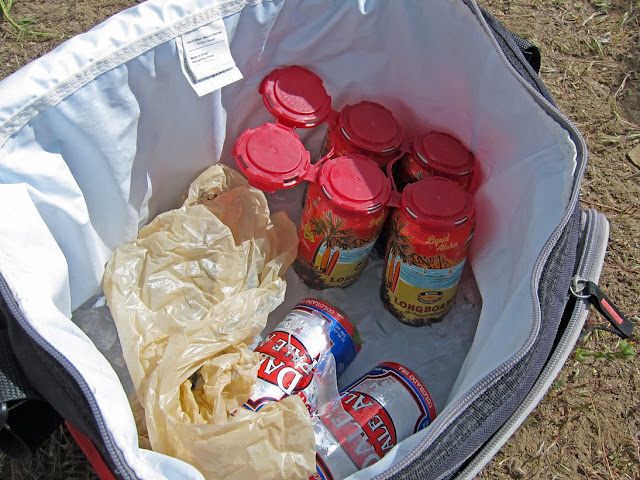 The campsite was an amazing place, right on the river, and unlike the previous two nights, the mood was damned festive.  The sun was out, and although there would be some work left to do on day four, we could smell victory.  It was great getting to know Steve and Meg and revel in the power of our pack that was now eight strong. 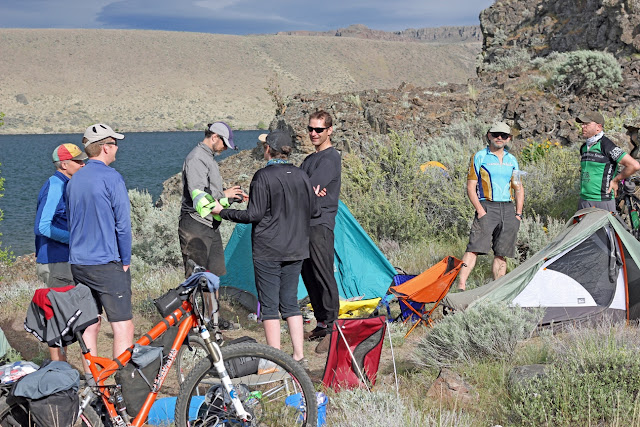 There was the small matter of the impending weather change, but we were, honestly, too jubilant to feel threatened, so we just enjoyed the theatrics . . . 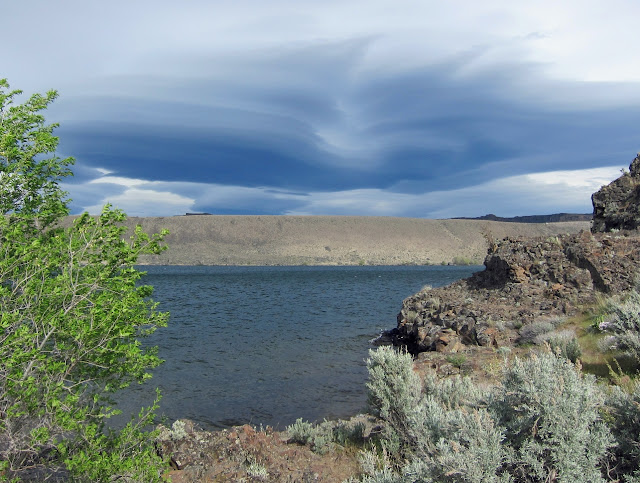 I moved out of tent city and into the burbs.  It's kind of how I roll.  I had every intention of sleeping like an angelic baby all throughout the long night, due to the lapping of the waves upon the shore just feet from where my head laid on my rad inflatable pillow.  Earth Mother would have other plans, though. 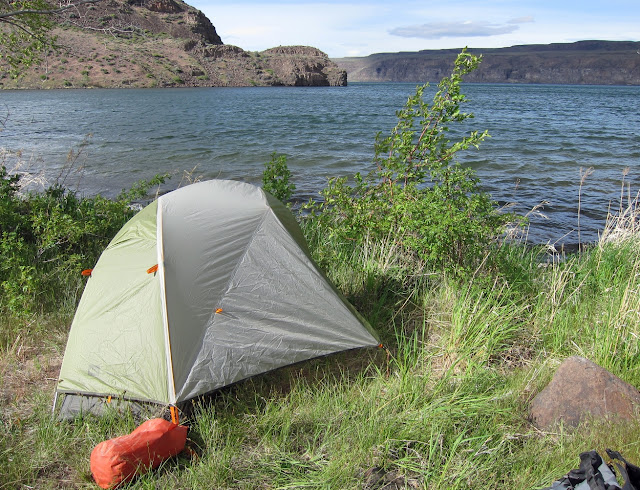 The filter would do it's last hard work of the trip, and do it righteously, as always.  We swilled on water from the mighty Columbia. 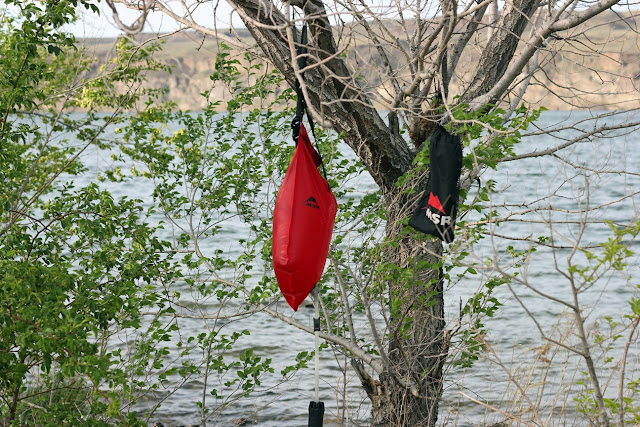 Megan chilled and absorbed some rays . . . 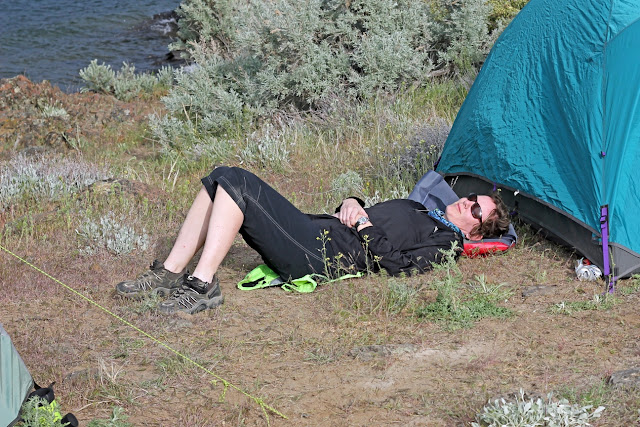 While her badass bike did the same . . . 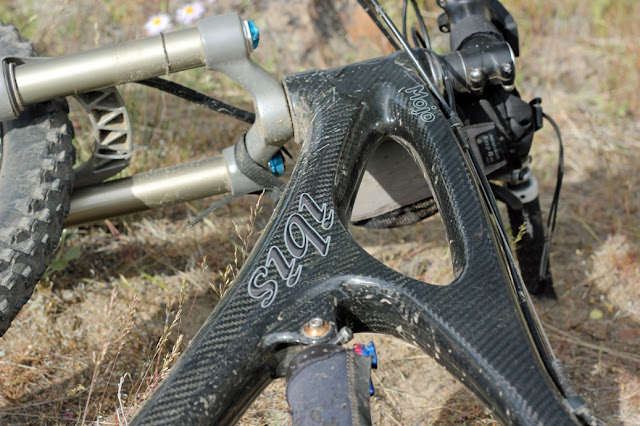 Ward's portable sound system provided us with his fabulous musical selections, as it had on the two previous nights.  There are ultralight bikepackers, and then there are us.  It's fine for the ultralight guys to do what they want, but the little things like this make all the difference in terms of the experience and what you remember.  This same system serenaded us through that frightful night at rattlesnake bay and I am so grateful to Ward for packing the extra weight up and down all those hills . . . 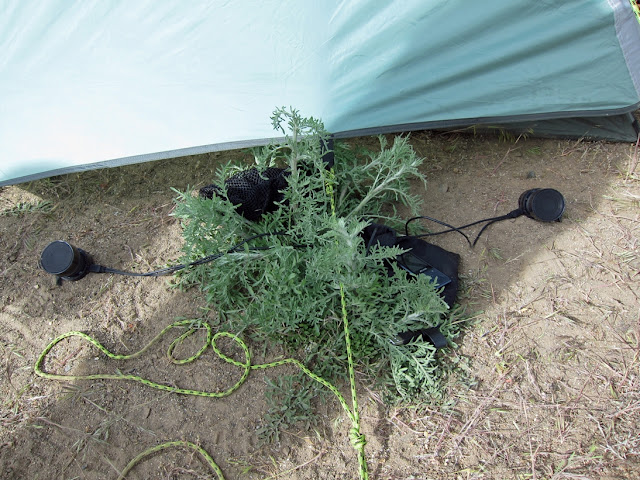 We were all feeling pretty relaxed and so what better time for a camping gear nerd-fest, over Steve's new stove . . . 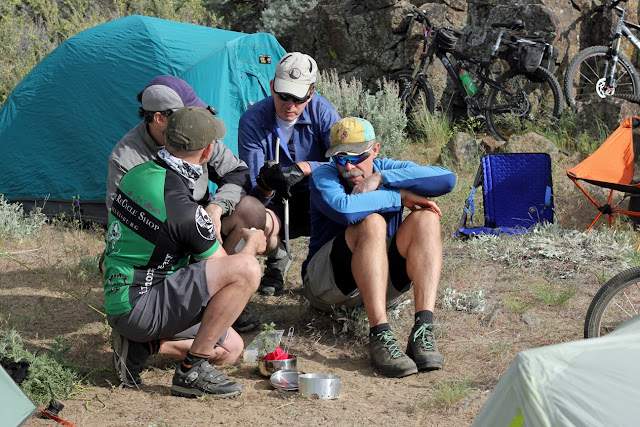 Joe had carefully considered his trip essentials, and one unlikely thing that made the cut was a mobile blood transfusion kit. 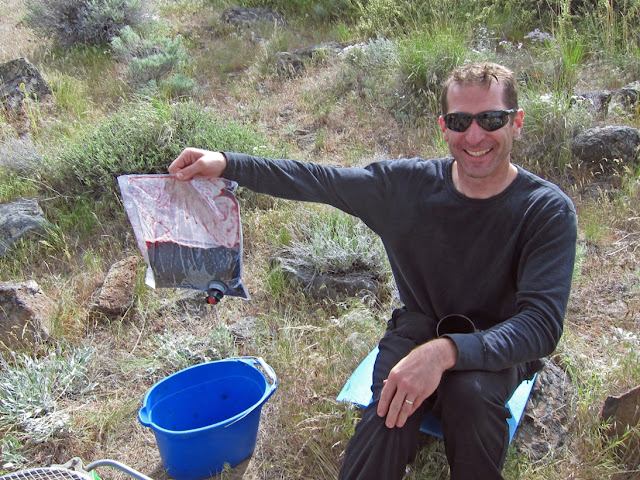 The vampires among us came crawling right out of the woodwork . . . 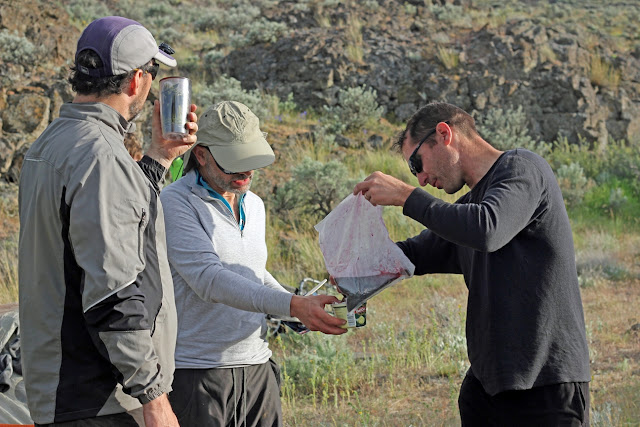 The wind and the skies were getting more and more pissed.  Everyone took a little extra care about how they staked down their tents, but I still don't think anyone had any idea of what was coming our way that night . . . 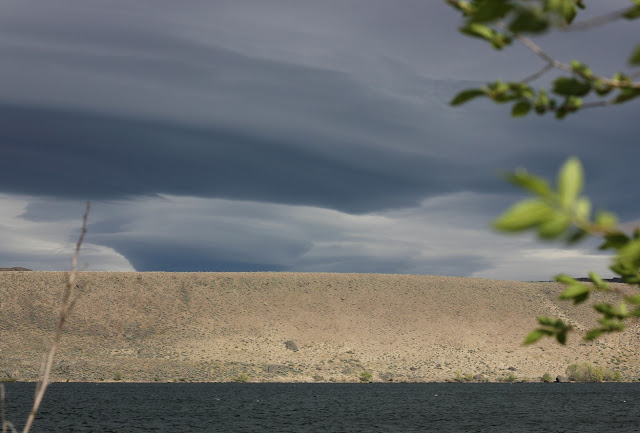 Time that night was hard to gauge, but I don't think I slept more than 20 minutes at a stretch during the entire night.  The wind would come at us in these ferocious gusts.  After a time, the pattern began to emerge . . . you would hear the wind roaring through the trees in the canyon above, and then you could pretty much count . . . one thousand one, one thousand two, one thousand three, and then . . . BAM!  It would hit your tent and just rock it, and you would just lie there and hope that your little nylon pod held it all together for you.  I got up once to pee, and the major challenge in the middle of the night, aside from not being blown over, was not peeing into it. I'm happy to report that I somehow got it right and delighted in seeing my whiz fly, fly away.

So there wasn't this definite end to day three and this definitive beginning to day four.  It was this wild transition.  And as I look back, it was just another awesome piece of the wonderous puzzle that was this trip.
Posted by Pat S at 11:57 PM

That was indeed an awesome night. :)

That campsite was actually a little more sheltered than the other logical choice down at the bay believe it or not. And big wind is just part of the landscape down there. But yeah, I kept thinking I was gonna wake up in a tent shred, lol...

My bike's name is Sloe, and she appreciates the flattering words. :) I had just started the process of test riding some newer mountain bikes while I was visiting family down in Portland in early Feb 2010, and along with a SC BlurLT and a Giant Trance snagged the Ibis for a test ride on a larf without knowing much about it. The Mojo was never supposed to be a contender. However, even this lowest end model rode nicer than the other two bikes even with builds twice as expensive. !!! After taking a few days to do more research and talking about it, husby drove clear from home to Portland and back on Valentine's day 2010 to retrieve Sloe for me. :)

The link pretty much explains the rest of the naming process. I lost my mind in Portland. :P
http://www.youtube.com/watch?v=VuC_l3ymXhM

Meg, the campsite was perfection. The selection committee rocked it!

The Mojo story is a great one and even better that it turned into a Valentine's day story at the end. Steve is rad, but then you knew that already.

I slept through it with the aid of ear plugs, did you hear me snore?

I used ear buds connected to the mp3 player w/ some soothing mellow music playing and still woke up several times to see clouds of fine dust blowing through my tent and covering everything with a talc like layer.

Steve & Meg, that campsite and the beer you provided were highlights of the trip!! Without your input, I think we'd have been a bit more subdued that night... (and would have had to pass around Stu's last two beers between the 6 of us, providing we could pry them out of his hands... Making me thirsty for a beer- and another trip as we speak!

Teds Woodworking has over 16,000 woodworking plans with STEP-BY-STEP instructions, photos and blueprints to make all projects easy and simple...

If you need your ex-girlfriend or ex-boyfriend to come crawling back to you on their knees (even if they're dating somebody else now) you got to watch this video
right away...