Mind-numbing stuff coming up. Worse than ever. This is gonna make the last post look like Girls Gone Wild. This is as bad as it's gonna get . . . maybe if you focus on that, it will help get you through. I hear that super-boring shit can actually enrage a person. I hope that doesn't happen. Let's jump in and get this over with.

One last thing I needed to get a sense of before I start putting racks together is how strong the brazed joints are.

This is a makeshift tab joint. (The tabs in these pics are mild steel and normally you would use 4130, but mild steel is what I have right at the moment.) 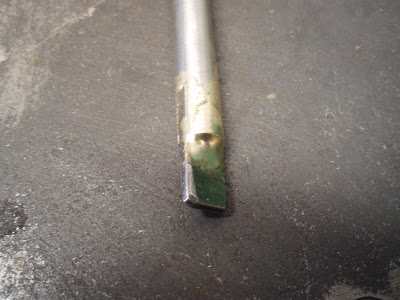 This next pic shows how hard is is for a newb for fill in the ends of the tubes on each side of the tab. Brazing parts with different thicknesses takes a little practice. Of which I could definitely use some more. 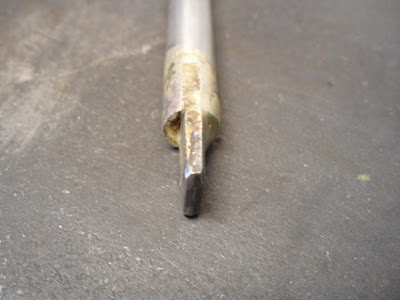 I put the tab end in the vice and slid a cheater bar over the tube and put some hurt on this dude. 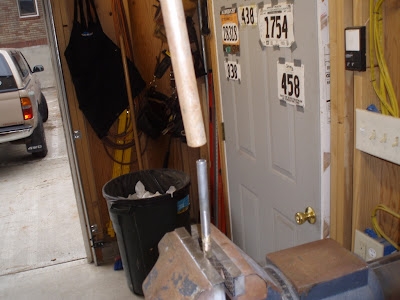 The brazed joint held up just fine - the tab base metal failed. (Note that this tab is only as wide as the tube.) 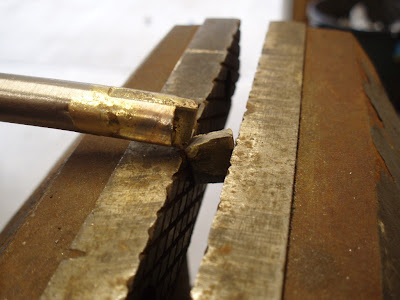 I took a cut through the joint - wow, looks like I used enough brass. That silver strip in the center is the tab. 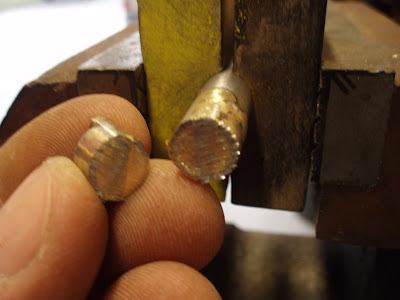 Speaking of brass, but on a side note, this is about as far down as you can burn your brazing rod before you burn the piss out of your fingers. Take it from me. 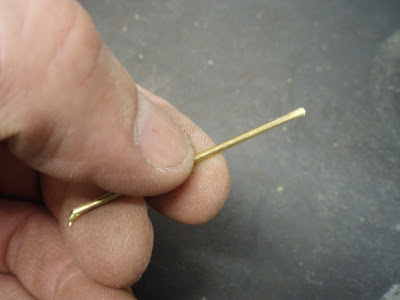 Next up, same test, only with a tab that's wider than the tube. 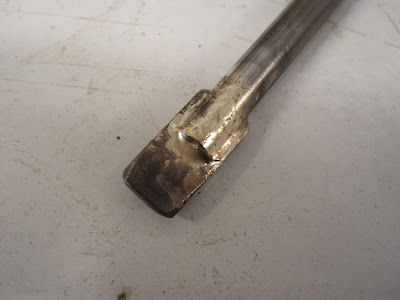 This time the tab was stronger than the tube. The joint still held up fine. 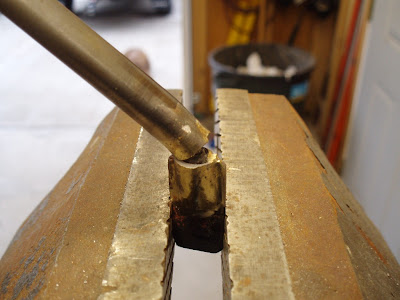 Next I wanted to test some coped tube joints. 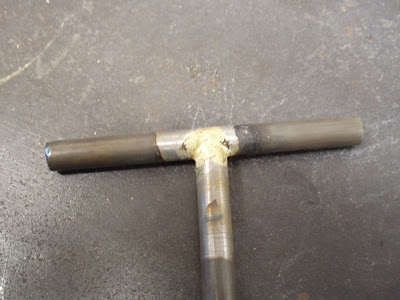 I wacked the ends off of the "T", stuck it in the vice did the same cheater bar routine. 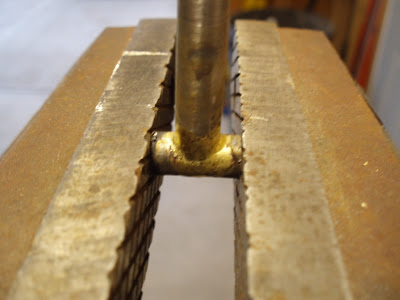 The joint let go this time. 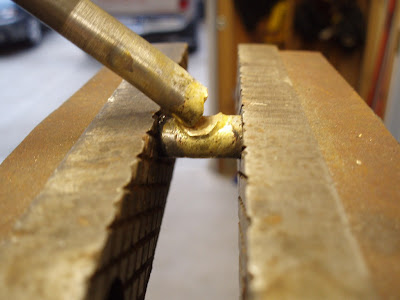 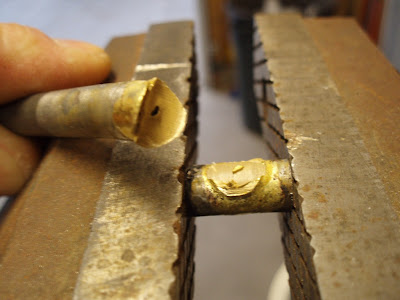 It wouldn't be much fun without a little torsion testing. 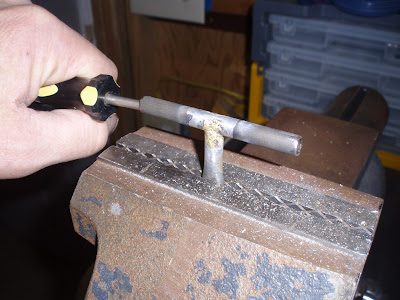 See how the tube has ripped right at the vice jaws. (To be fair, there's a massive stress riser there, but still, that's a pretty strong joint.) 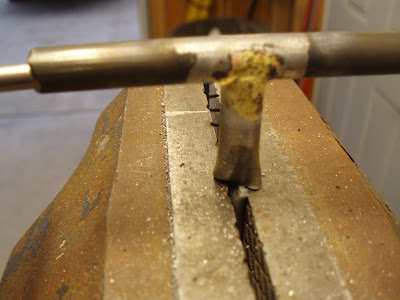 And finally, I sectioned some "T" joints. This pretty much explains why you clean the inside of the tubes - the brass flows inside and adds strength to the joint if it has something to hang onto. The two on the far right are a little closer to what you are shooting for than the others. 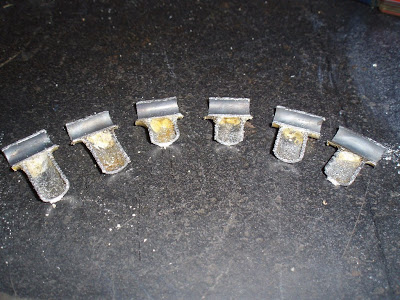 The remnants of my extravaganza. 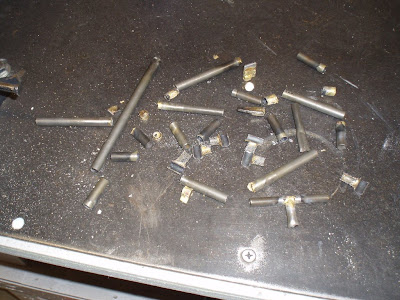 After the smoke cleared, I wanted to do one last thing and that was to make some dies for flattening tube ends. This is an alternative to brazing on tabs and I think I'm gonna be using this method at times. You know the stress riser thing I was talking about earlier? Well, the rounded corner of the dies are supposed to prevent that. 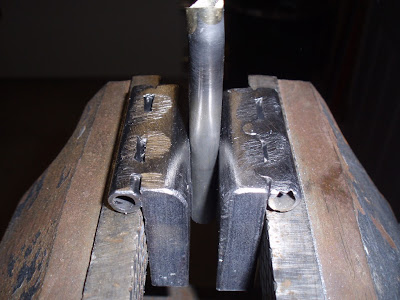 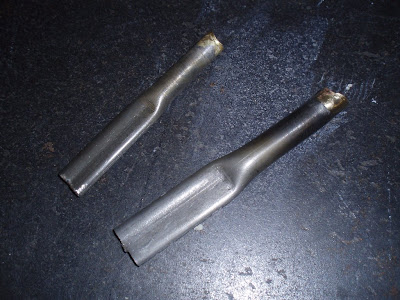 So thanks for hanging. Or maybe I've lost you and I'm just talking to myself. Either way, I'm as ready to be done with this as you are. It was all good but now it's time to build.

Re-entering the atmosphere as we speak. Ahhh, I can smell the oxygen - the kind that's not bottled! See you earthside.
Posted by Pat S at 9:48 PM

Looks like you've done well. A thrilling journey for sure. Stoked to see what you end up building as your first rack.

Gees, Pat. The only thing of importance that you'll carry on this rack is a 6-pack of beer. Well, on the other hand, that does explain all this testing---

Not as much quacking. It always helps to destroy stuff to keep things interesting.

Anon: A good front rack on a properly designed bike can carry a lot more than 6-pack. Here's a 40 pound load I carried on mine.

Your attention to detail is awesome, Pat. The rack(s) you make will have an implicit lifetime guarantee.

Guys, thanks, as always, for the comments. I'm trying not to get all sentimental, but the exchange is really fun and even though I never cared about how many people read this blog and still don't, I have to say it is way humbling for this goofy dork to have people drop in and say hi.

Oh, man, these feelings are weirding me out. Let me just close by asking you creepy bastards why you are lurking around on the internet.

The new front picture is hilarious!

Ditto on the new awesomeness of the new photo.

Alan, Hank: Thanks. I swear I can see my dog grin a little when we go by.