Gotta warn ya, I'm gonna go into geek orbit here. I'll come back to earth soon, but this is just something I need to deal with on my path to rack nirvana.

In my former life in Seattle, I worked for a company that had a pipe and tube bending division that I was very much involved with. So I have some of that burned into my brain and because we never got involved with anything this small, I just needed to know, on this particular Friday night, how 3/8" and 5/16" 4130 tubing acts when it gets bent up on Ridgid hand benders. Once this is over, I'll know the bending rules part of this game and I can move forward.

This sketch is the basis for what I want to know (click the pic for legible): 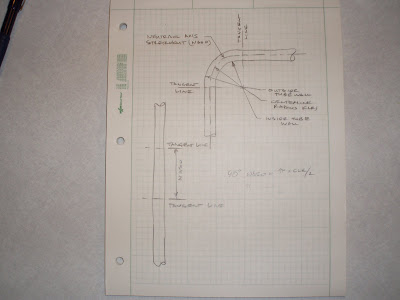 "Tangent points" of a bend are where the tube starts to change from straight to curved. In theory, the length of the curved tube, between tangent points, along the centerline, is equal to the length between those same tangent points before the tube is bent. The inside wall of the tube compresses in the same amount that the outside wall stretches. In the perfect world.

Trouble is, the perfect world doesn't exist and when a tube bends, it stretches more in real life than it does in theory-world. I just didn't know how much, so I set out to find out.

First off, I marked the tangent point at the start of the bend and at the theoretical end: 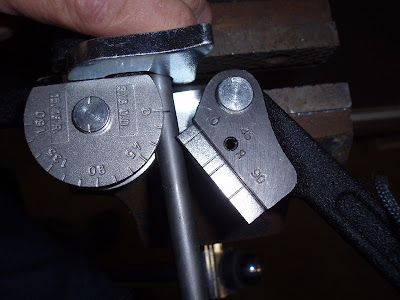 Then, I bent the tube to the 90 degree mark: 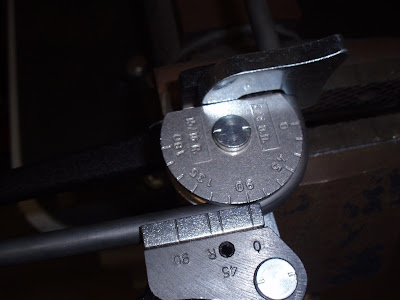 Then I measured the angle. Not even close: 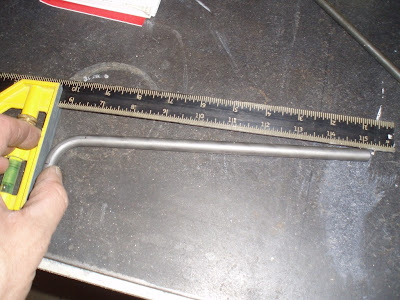 Back to the bender, until I got a good 90. At that point, I looked at how far the theoretical end was from the 90 degree mark. I measured it at about 1/32". This was kinda my first data point. 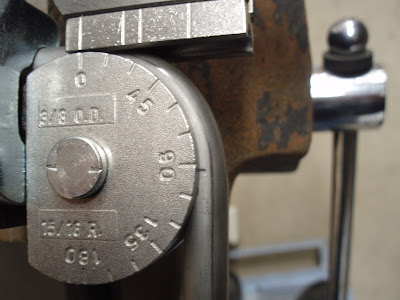 But I wanted to verify that, so I sprayed some primer on a piece of sheet steel and then locked the bent tube down and scaped along the edge: 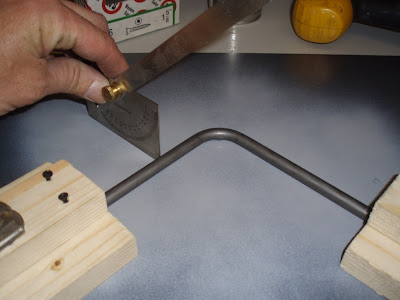 I used a square to mark the tangent lines: 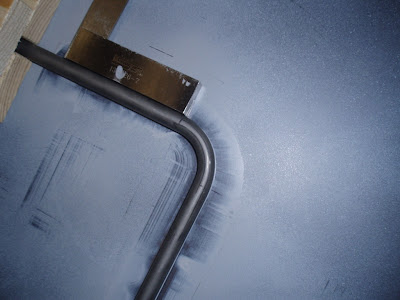 Paint wasn't quite dry, so I helped it along. When you own a torch, you are the man: 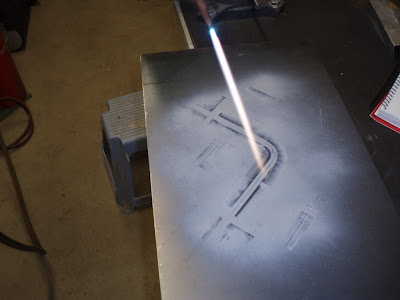 Point of interest: The tubing flattened out, as you would expect, in this direction . . . 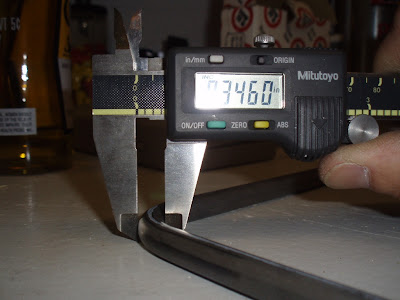 . . . but didn't elongate in the same amount in the other direction. You're fascinated, I can tell. 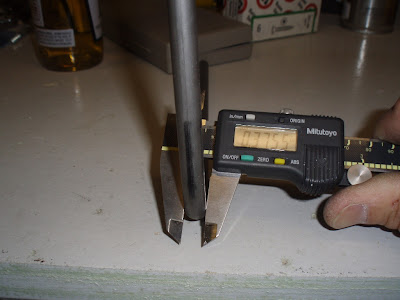 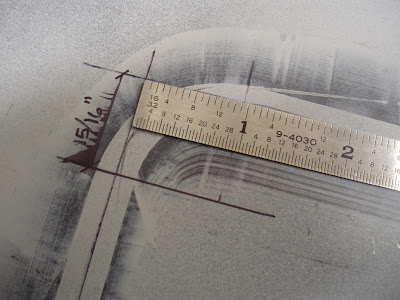 Bottom line: This bender is designed to bend a bunch of different materials with different physical properties and the correction factor for bending 3/8" x .035" 4130 is smaller than I had expected. For any kind of normal work, I'll calculate at theoretical. If I'm bending a continuous rectangle (as in a porteur deck), I'll subtract 1/16" from the overall length.

I did a bit of testing with the 5/16" bender and got the same results. Whoo, big surprise.

To the three of you that haven't dozed off, thanks for hanging. This is pretty boring shit, I know. The good news (if there is any) is that at the end of the night, I brazed up more "test tubes" and tomorrow we're gonna pound the crud out of them. See you then. 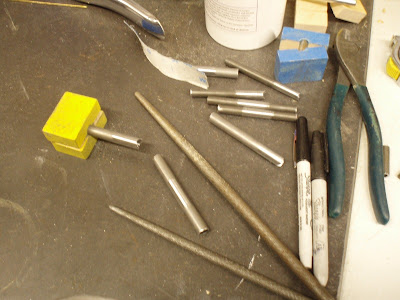 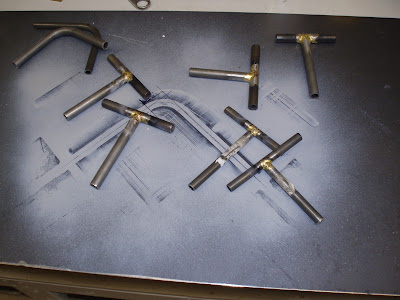 You know Pat, I have a friend that's a soil scientist. He's very passionate about his job. He often will go on a speil about soil content and even spout off about different soil chemicals and properties. He did that to me one day. I listened politely and when he was done I said, "Phil, all I heard was quack, quack, quack.".

(love the on-going drama though. I look forward to seeing how the stress test goes.)

Good stuff Pat. I for one welcome the forthcoming stress test study presentation from our new tube bending and brazing overlord.

Great work. School has my tubes a little bent right now so if you need some help beating the shit out of stuff, let me know.

I am enjoying your geeky OCD Rackufacture posts very much.

"...I just needed to know, on this particular Friday night, how 3/8" and 5/16" 4130 tubing acts when it gets bent up on Ridgid hand benders. Once this is over, I'll know the bending rules part of this game and I can move forward."

What about the prior 4,129 tubings? Have you consulted any Futurama episodes for bending rules?

"Trouble is, the perfect world doesn't exist and when a tube bends, it stretches more in real life than it does in theory-world."

And how often do you visit this theory world?

"You're fascinated, I can tell."

Yes. What are you talking about?

"For any kind of normal work, I'll calculate at theoretical."

There you go traveling again. I mentioned to someone we both know that you seem to have gone insane. He said, "Yes, but in a good way."

Very funny. I see how you guys are now. Still, this will not deter me from my twisted obsession.

Great stuff in the rack building. Thanks for all of the info. What model of Rigid bender are you using?

Awesome blog about Tube Bending. I enjoyed reading your articles. This is truly a great read for me. I have bookmarked it and I am looking forward to reading new articles.

I think this is such a fascinating process. I want to learn more about how to do it. I would like to be able to bend some tubes myself. I need them for a project I am doing on my home.
Gary Puntman | http://www.inductabend.com.au/special-services

Great article! I still haven't managed to form a smooth bend yet, but I'm getting there. I didn't realize tube bending could be such an involving process! Thiago | http://www.inductabend.com.au/special-services

Thank you again for all the knowledge u distribute,Good post. I was very interested in the article, it's quite inspiring I should admit. I like visiting you site since I always come across interesting articles like this one.Great Job, I greatly appreciate that.Do Keep sharing! Regards, Tube Bending

Informative blog which clearly explains about tube bending process and various procedures involved in it.
Rohrbiegen