Sorry that I've bailed on you guys lately. I've been screaming busy. I can only imagine how much you've missed me. I've missed you more.

'Kay, then. That should take care of the re-connect stuff. Stopped myself just short of the L-word.

So then. On to riding . . .
Last year at this time, I put together the Karate Monkey. It was designed to be my winter buddy. It did pretty good, but fell short in a coupla areas. First off, it's not go-far enough. Secondly, it can't carry shit. Here it is in pretty much its original incarnation: 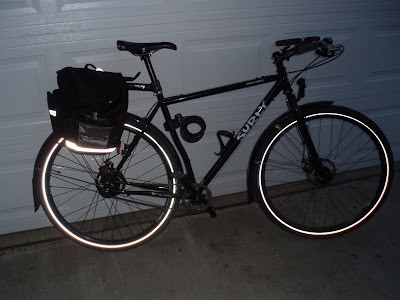 See how high the load rides? That'll wag your tail like mad. Don't get me wrong - I'm not down on it. It's just that good bikes aren't born overnight. They take time to evolve. And it's time for this bike to get a little less novel and a bit more practical.

So I've been busy swapping out the bars, which has meant also swapping shifters and levers and throwing gobs of my time (which is apparently worth nothing) into this money pit. Here's the new, improved cockpit: 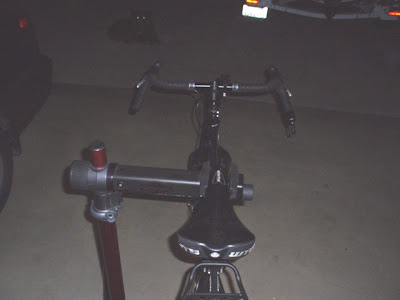 And then there's my obesession with building racks. I'm gearing up like there's no tomorrow, taking the concept of e-commerce to the next level. Tools and supplies are rolling in in waves. UPS is contemplating a branch office on the corner.

But anyway, I'm just about ready to get started.

And as if that wasn't enough, Patty thinks she should be allowed to park her car in the new garage this winter. That is absurd!

Easy to be all brave on the internet, but I happen to like being married, so I cleared things out. An even worse pic, but I think it is plain to see that the car is in the garage. 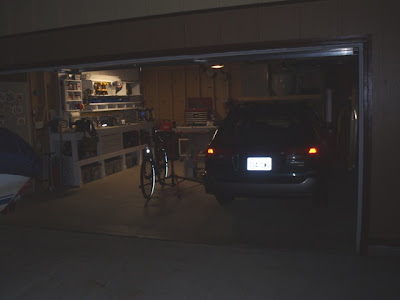 I'm thinking that I'm in a pretty sweet position to bargain for my next bike.
Posted by Pat S at 10:29 PM

Good to hear you talking about riding bikes again Pat, especially Surly's. Hope we see that Monkey out in the snow again this winter.

I want to put my name under Speare's for a rack. Or at least be able to observe some fabrication.

Mike, good to *be* talking about riding bikes again.

The extra large milk crate on my standard rack works well enough, but I'm interested to see if there could be an improvement. The biggest roadblock: currently I can haul a 35 pound bag of dog food, but if I lower the racks to the sides of the wheel that won't work. Ideas?

Pat, the monkey is there for you. It's gotta be one of the most versatile rides. I'm excited to see it's evolution. Post more pics, what are those new bars? The rack building is very cool too. Could we all plan a cold Sunday afternoon watching you build while we tilt back some micros? Wade

Alan, I can't imagine your homeless bike without a milk crate. I think you should stay the course. Besides, 35# is a righteous load.

Wade, I'm there for the monkey, as well. Love the shop Sunday idea. Toxic fumes and beer. Hell ya.