This is gonna be a really long post. Pretty dry, too. If you're not too into the rack building thing, this would be a good one to skip. There, you've been warned.

My first project is finally underway - it's a rear rack for the Karate Monkey. It's a pretty challenging design for a first attempt and as a result, I've been having trouble making any progress. I think I've been a little overwhelmed - it's all new ground and you think something is gonna work one way and then it doesn't, or some way you had planned to do something takes way too long and you have to figure out something different. And then there are the mistakes. Anyway, it's been really slow and with only a coupla hours at a time I've not been able to get in a groove and I've been getting frustrated and pissy. What I needed was a good solid chunk of time to lock myself in that shop and really focus in on what I was doing and get some shit figured out.

So I pleaded my case to Patty last night and she agreed to let me go on an OCD bender. I walked into the shop at eight o'clock last night and walked out 8 hours later majorly wiped but feeling like I'd finally got over the hump and had this project out of park and into drive.

I picked this as my first rack because it's what I need right now. I want my Karate Monkey to be my primary winter bike, but I need a better way to carry things. I got these new waterproof bags a coupla months ago and I've been hanging them off of this rack that clamps to the seatpost. It's the best solution I was able to find in the way of off-the-shelf racks . . . more traditional styles don't work well because they hinder access to the rear disc, which I need if I have a rear flat. I have no complaints about the construction of this rack, as it is rock-solid, but it places the center of gravity of your load so high that it really goofs up the handling of the bike. 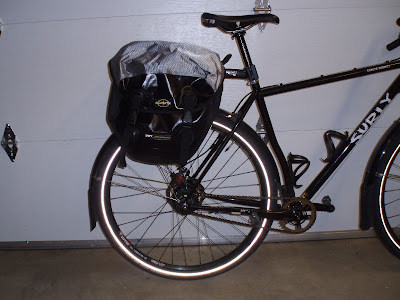 My plan is to build a rack that drops that COG way down. (This drawing shows the top hoop only, which will support the panniers. There will be some struts that run down to the dropout, but I'm still working on how I want to do these.) Click the drawing, or any of the pictures for that matter, for a bigger view. 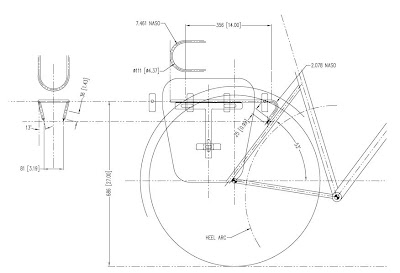 One thing that happens when you drop the bags down is that they move closer to the arc created by your heel as you revolve the cranks. So you have to move the load farther back to provide clearance, which is not all that desirable. I've tried to balance those two things with this design. 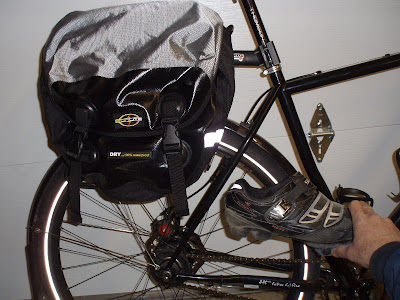 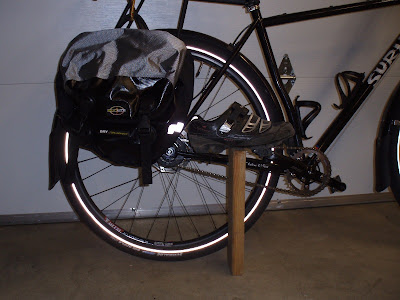 Since I'll be using my Lake boots for a good part of the winter and they're my largest shoes, I used them to establish the arc. I measured from the center of the crank and used 15" as my heel travel radius. 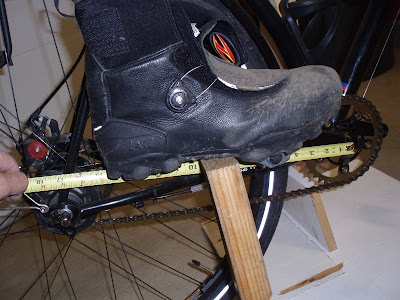 I ordered a coupla piceces of foot-square 4130 sheet - one .09" thick and the other .125". My first job was to make some tabs for bolting the rack to the frame. 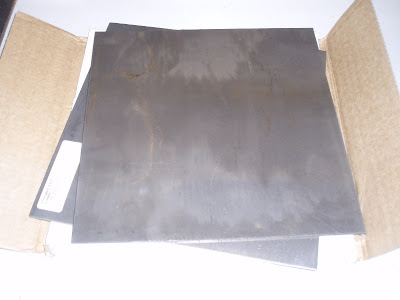 The tab in the center of the picture below is my first attempt. You wouldn't believe how much time is wrapped up in this little dude. I used the .09" material and it just looked too thin and geometry sucks and it just made me generally unhappy. I'm not a perfectionist, but I do need at least decent work from myself and I knew I was in for a do-over. The other tabs shown in this picture are waterjet-cut tabs that I purchased from Alex. They're gonna be the bomb. But I'm convinced that making tabs is an essential part of my rack-building education, so I need to do it the hard way the first few times. 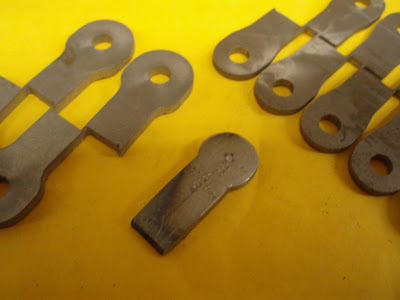 I decided to get a little more serious this next time around. I scribed the layout on the sheet and then cut them out of the sheet with a hacksaw. Heh, nice straight cut. 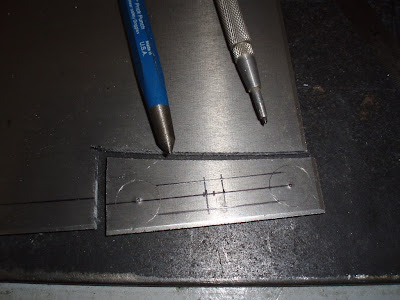 Then I clamped them into a set of vise grips and roughed them out on my bench grinder. 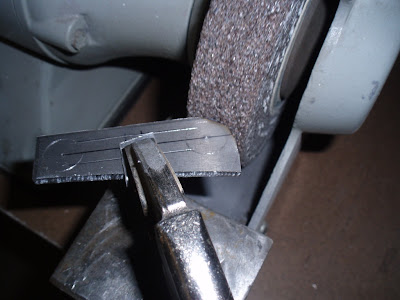 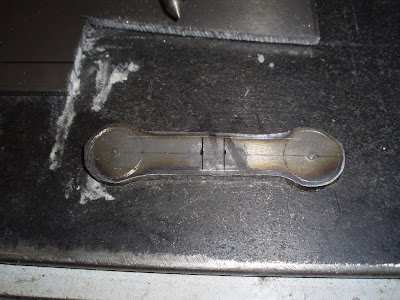 Next, I took them down close to their final shape using files. Lots of filing, lots of paying attention. I left just a little extra meat on them for final cleanup. 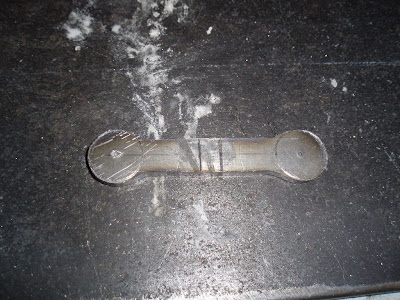 Finally, I cut them out of the "dogbone". The dogbone idea turned out to be extremely helpful, just because they are so small and the size of the combined tabs was much easier to lay out, handle and clamp in the vise. 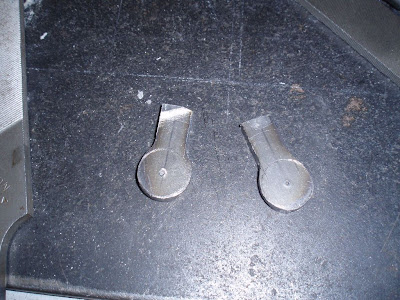 The rack design is intended to take advantage of the cantilever brake bosses on the frame, which are not being used, since I'm running discs. My original plan was to make the top hoop in one piece. I would make the u-bend first and then the tighter-radius bends at the ends that attach to the bosses. But I scrapped the whole thing when I crimped those bends. Except that after sleeping on it, I decided to save the "u" and splice some bent ends onto it. This decision was made easier by the fact that would need another full (4') length of tubing to start over and I didn't have any more left. The whole crimped bend thing actually turned out to be a blessing in disguise, as you will see below. This is the u-bend just before I crimped the ends. 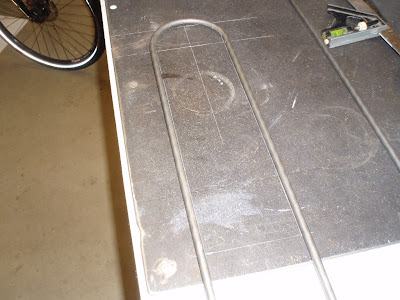 I cut a coupla short lenghts of tubing for the ends and set about to cut notches in them to accept the tabs. I've already refined my method for doing this quite a bit and probably have a ways to go, but here's where I'm at right now. First I measure and mark the depth of the cut on both sides of the tube. Then I mark a vertical cut line on both sides. 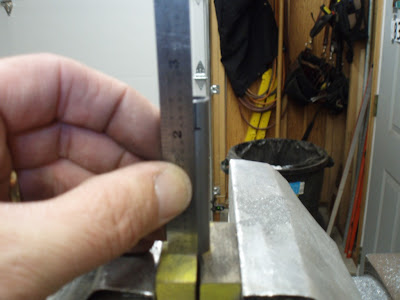 By angling the hacksaw blade, you can cut one side at a time, which makes it much easier to make the cut on line. 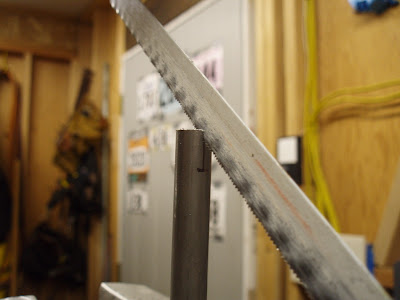 Then I use a cutoff wheel just slightly thinner than the tab to widen the slot. 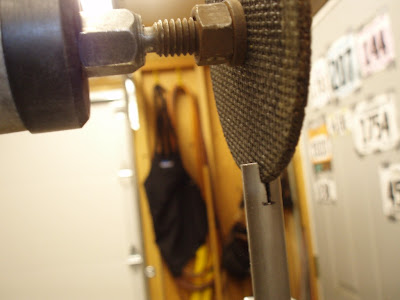 I take it to its final width and square the bottom edge with a file. 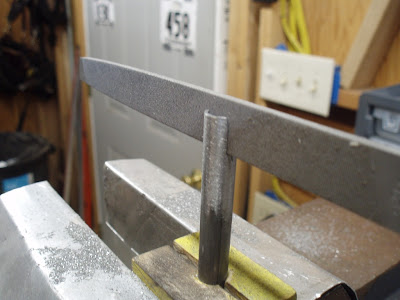 One final step is to file a bevel on each side of the tube and then it is ready to accept the tab. I copied this tab style from Alex. Maybe at some point, I will try some different styles/designs, but for starters, I think it's smart to use something proven. Plenty challenging for a newb. 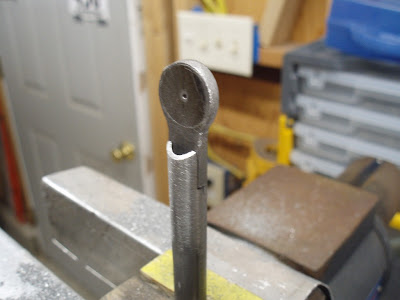 Here it is brazed up and finished off. 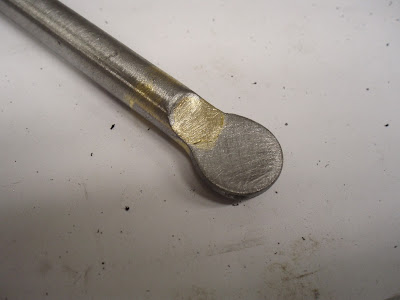 After making sure I would have enough bender clearance, I decided to bend the tubes after installing the tabs. The bend angle is trial and error and I used a layout to check the angle. 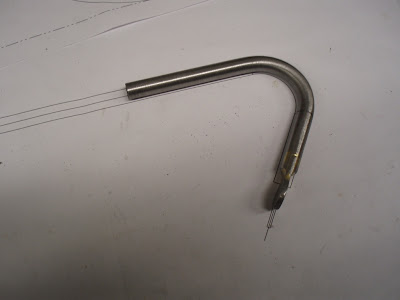 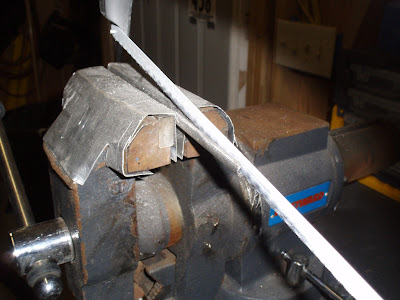 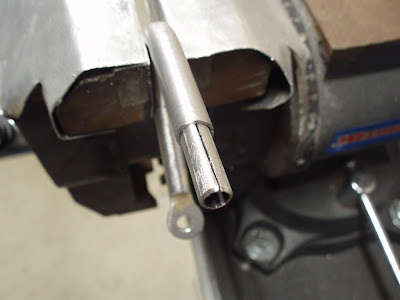 Here are the ends being fit into the U. This arrangement lets me fine tune the angle of the ends and would not have been possible had I not ended up making the top loop in sections. 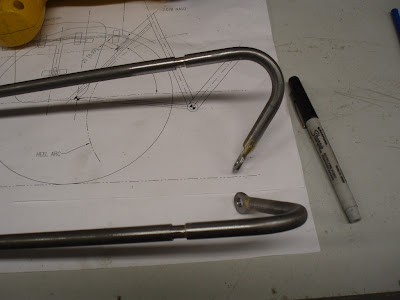 The canti bosses have 10 mm female thread. The canti post threads into the boss and has a 6 mm internal thread. I was able to cut the pivot tube off of the post and file the end flat. 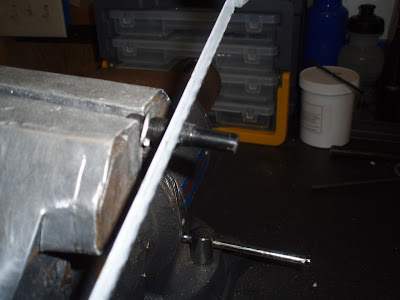 Here is is being threaded into the boss. This is what the rack tab will bear on. 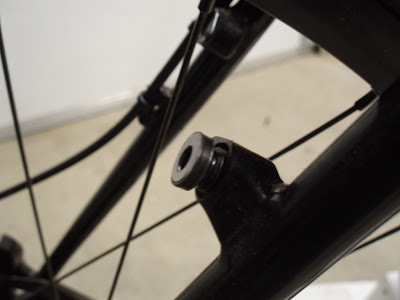 Here it is, bolted up and fit into place, which left me very tired and very happy. The end of the U extends farther past the fender than I like, so I will trim the legs to bring it in. This is another thing that would never have been possible if I hadn't crimped those bends. Guess that turned out to be a pretty good thing. 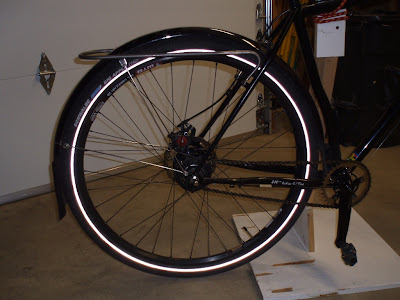 I've used up so much 3/8" tubing on test pieces and mistakes that I don't have enough left to finish this rack. Another order is on the way and should be here early next week. Can't wait to get my hands on it. 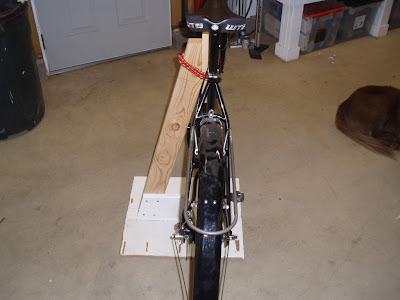 I can't believe I read the whole thing...

I just look at the pretty pictures.

Alan, in some way, this will make you a better, more complete person. Just don't ask me how.

Jeff, I put the pictures in just for you.

Ran out of tubing??? Now what am I going to do with the rest of my popcorn? Nice post Pat! Look forward to the rest of the story, popcorn at the ready!

Eric, probably oughta pound the resta that popcorn - it doesn't keep to well. Best to brew up a fresh batch for part 2.

You think that the deck's U is too long, but it looks like prime real estate for a tail light!

Awesome post. I am in awe, and feeling very inadequate right now...

Thanks Jim. I actually do have plans for a tail light mount at the end of the U. Stay tuned.