When you're about to doing something you're not supposed to do, and you know that it's wrong, but you still really really wanna do it, and you know you're gonna do it, you don't go around asking the question of whether you should or shouldn't do it from people you know will give you the answer you don't wanna hear. Which is why I didn't ask Patty what she thought about my idea of blowing off doctors orders to stay off my bike and seizing the opportunity presented by this bit of glorious late-season snow and taking my fatbike out for a spin in the park.

What you do wanna do when you're in my situation, is to seek out enablers, those who will support your bad decisions and perhaps even accompany you on your journey down the wicked path you have chosen. Which is why I turned to Brandy. And while I had solid confidence about which side of the argument she would come down on, I was in no way prepared for the extremity of her viewpoint: whereas I anticipated it to be along the lines of "it probably can't hurt to take a ride", what I got was more in the vein of "doctors orders aren't worth the paper they're written on!" Whoa. Settle a bit there, girl.

Whether she was playing me for a fool to get me down to the park (not a difficult task and probably the most likely scenario) or whether she really feels this strongly will probably never be known for sure, but as I now ponder some of her bizarre behavior during various visits to the vet, it occurs to me that there is a strong possibility that she may truly be philosophically opposed to the idea of healthcare in general.

At any rate, we did succeed in partnering up on this crime, just as evening was turning to night (we like to fly a bit under the radar in order to soften the impact of our off-leash digressions). 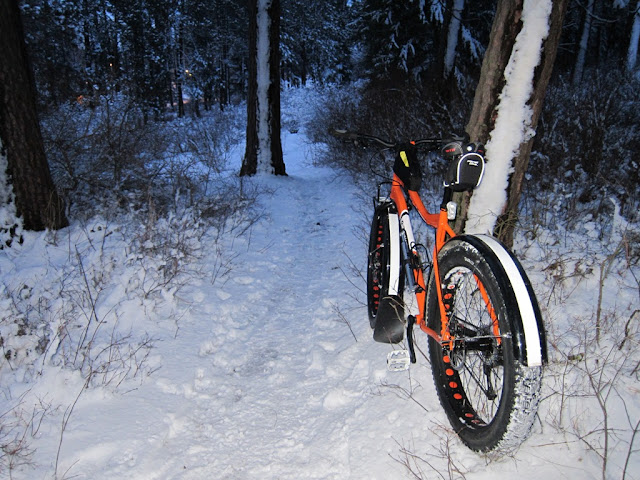 Towards the end of the ride, on the east side of the park, I came across a few hundred feet of another fat bike track. That's mine on the right, his on the left. The forensic evidence was day-old and therefore cold, since we had some more weather activity today - I couldn't even pull a tread pattern off it. But a fat track for unmistakable damn sure. I followed it for as long as I could, but lost it at a busy intersection of cross-country ski and foot tracks. That's not much to go on, but I know for sure he's/she's out there. Who doesn't love a mystery. 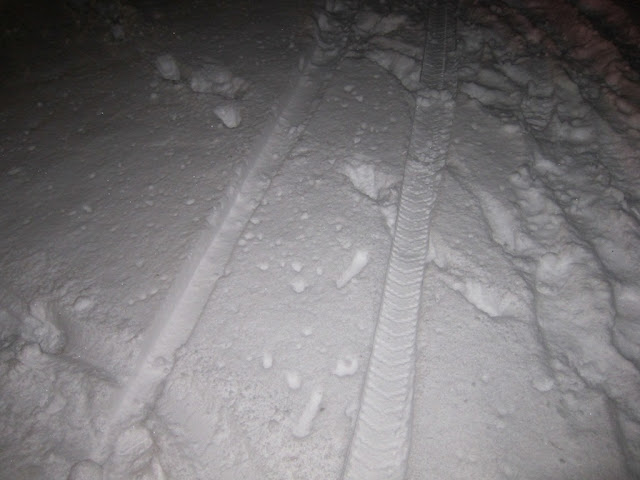 My accomplice is now resting comfortably and appears content and at peace with her actions. As for me, does my back hurt just a little more? Yes. Am I glad I did it? Yeah. Hell yeah.
Posted by Pat S at 9:47 PM

Regardless of any consequences, it's great to have such a level-headed accomplice/co-defendant who knows the virtue of fresh snow.

If you need your ex-girlfriend or ex-boyfriend to come crawling back to you on their knees (even if they're dating somebody else now) you need to watch this video
right away...