Back on the 7th of January, I talked about the beginnings of a new rack.  It took a while, but today it finally became finished.  In between, this is a little of what happened:

So.  This is the part where I have to confess that I am kind of a nut job and that this rack is pretty experimental.  But let me at least explain my twisted train of thought . . .

My motivation for buying this bike was never primarily for snow riding.  Although it was important to get my hands on it before winter, because it [would have been] a good opportunity to put in some saddle time and get to know the bike and just plain have some fun in the snow.  I had a pretty decent winter plan, based on our more "normal" winters of getting some daily exercise in the park.  But there was no snow and the plan crashed, and it's not that bigga deal.

My motivation for buying this bike *was* primarily my planned summertime cross-state tour on the John Wayne Trail.  I'm pretty messed up over this trip.  When winter didn't happen, it was sorta sad, but if this trip doesn't happen, it will be majorly tragic.  To put things in context.

And there are a lotta details to work out about the trip.  Many, many, in fact.  Like exactly what gear I will carry and how I will carry it.  And I don't have a bazillion hours at my disposal to build and test a buncha different racks - I will need to be spending quite a lot of my precious free time riding, if I'm gonna be in the kind of shape I need to be in.  So the idea I had was to build a really stout front platform that could be righteous by itself, but that would also have attachment points that would give me the capability to hang all kinds of bat-crazy attachments off of it, when I finally get to the point of settling on what it is I think I need.

A dyno light was a non-negotiable feature of this bike.  Because I think it will be so totally rad to do a bit of traveling by night, and because there are some tunnels that require light - most notably the 2-mile-long tunnel at Snoqualmie (I rode this tunnel in about '99 or 2000 without proper light and got schooled on how dark it gets in a tunnel that long).  And I ain't screwin' with no battery light.  I've been spending a lot of dough on the bike and I was getting by with a cheap ($50) B&M Lyt for the time being, until I could justify dropping $120 on a B&M Cyo.  Unfortunately, the Lyt disintegrated when as I was simply adjusting the angle.  Totally lame and disappointing - I understand the a budget light won't have the brightness or beam characteristics of a more expensive light, but it should at least have a case that doesn't fall apart for no reason.  Last one of those I buy, then. 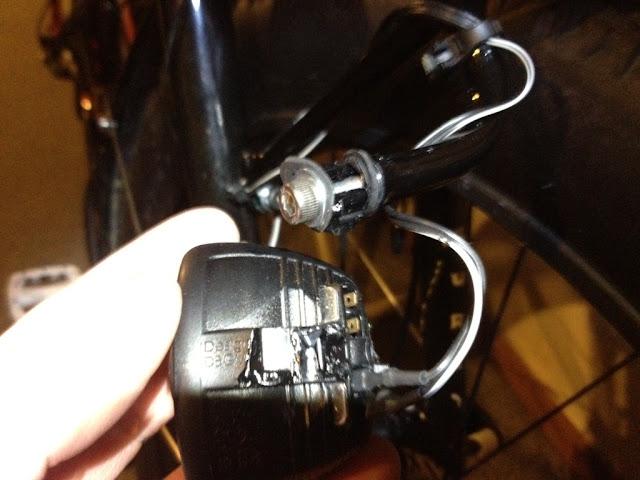 So I ponied up and bought a Cyo - I own one already and love it.  Badass.  But there are two versions . . . the N and the R.  I own the N, which shoots bigger light farther down the road, at the expense of the 3 or 4 meters right in front of your tire, which is the "nearfield".  I figured that since this is generally a pretty slow bike, I'd like to know what's in the nearfield, for a change.  So I ordered the R.  But when I get it, it says it's an N. Even though the lens looks like an R.  Beats me.

At this point, you're among the 99% who don't don't give a shit and just wish I would shut the hell up.  For the  other 1%, there are attempted explanations of all this here and here.  Carry on, you one-percenters.  I'm letting go of this German marketing insanity.  I think it'll do the job, whatever it is. 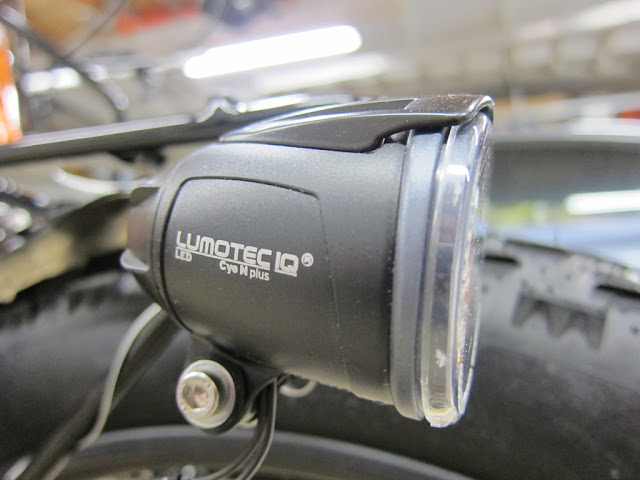 Here's the new front rack in context then. 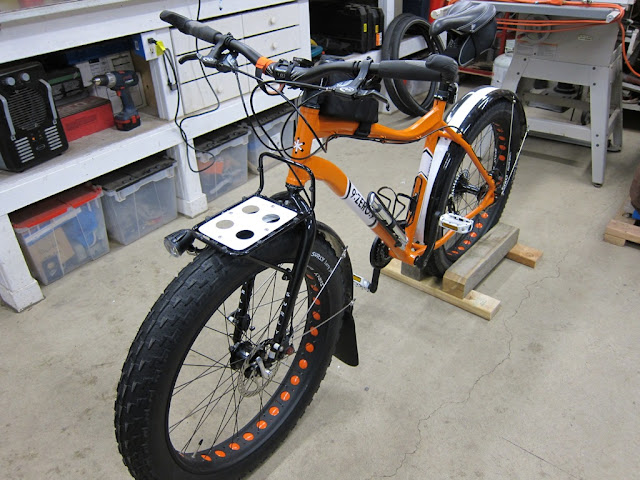 Tragic and awesome...isn't that what I said on the horrible service night at Benneditos? God bless Patty. I love your posts. Wade

Benneditos has great service if you only order beer(wings). They dont serve food.

This bike is hot. Not near as hot as the JWPT in the summer, though.

Only one of the tunnels on the JWT is open.

Beachbikes.net promises to continue to evolve the beach cruiser industry by offering sleeker, new beach cruisers that everyone can afford.
bicycle grips

Was your Lyt ever mounted on a rack that hadn't been painted yet?

I had a Cyo on my homebuilt rack for a while, a rack that I didn't soak all the flux off of and that hadn't been painted yet. I think something chemicall-y happened because my Cyo broke just like your Lyt did.

But, and I can't tell from your pic -the plastic on my Cyo was very deteriorated, it didn't just snap, it crumbled into dust almost. Weird.

Interesting. My Lyt was mounted for the first time ever to this powder coated rack.

When it broke, it didn't just snap, it crumbled into dust, to use your words. The first thing I remember thinking is that this is bad plastic - it just shouldn't fail like that. I don't think the flux on your rack had anything to do with your failure. I think we're both victims of some bad B&M engineering and/or quality control.

Weird, maybe it is a manufacturing defect. Do you still have your Lyt? Wanna sell it?

I have one and was going to remove the mounting tab on it so I could mount it inside a different housing. But it looks like yours already has the mounting tab removed, and I won't feel guilty for having cut mine off.

Start following our signals today & gain up to 270% daily.